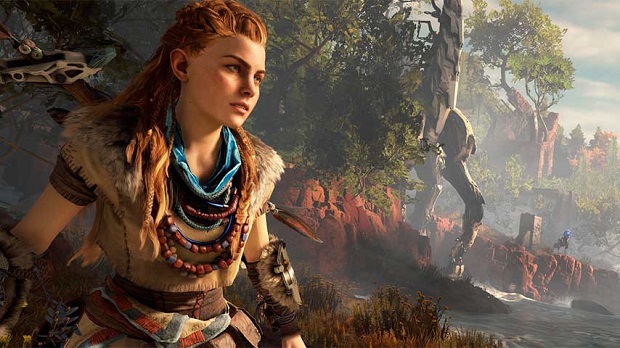 What I saw of Horizon Zero Dawn at E3 this year made me feel a sense of desperation that the grittiest of survival games have never managed to create within me.

Games like the Tomb Raider reboot and The Last of Us have aimed to create a feeling that the player was weaker than what they were up against, and that they would need to be crafty and resourceful to survive against uneven odds. Even so, both games eventually fell into the pitfall of the player becoming powerful enough to run through a game with minimal worries about supplies or planning and executing strategies to circumvent outright firefights. But Guerilla’s demonstration of Horizon sold me on the idea that the Killzone developer was creating something that would force me to be tactical, resourceful, and just more cautious than games tend to ever require of me.

Horizon’s protagonist Aloy lives in what Guerilla calls a “post-post-apocalyptic” world, where humanity has regressed into a more primitive state, but there’s a juxtaposition found in the futuristic technology that still remains from humanity’s world before it ultimately fell. This world is overrun by vegetation, but is also inhabited by mechanical creatures that have become their own force of nature. Those left in humanity are forced to revert to old ways of hunting, with Aloy relying on a bow, traps, and other methods that seem primitive when compared to the machines she fights.

During the presentation, Guerilla was really emphasizing that the player is supposed to always feel outnumbered, outsized, and outgunned. Aloy lives in a world where humans have had to rely on outwitting enemies instead of overpowering them, and that means leveraging what they have, even if it’s not the most ideal for fighting mechanized herds of dinosaurs.

But even in this desecrated world, Aloy and the rest of humanity has learned to get by through cunning and ingenuity. This was shown in the way that Aloy takes out herds of machines she encounters in Horizon’s open world. Aloy goes into a fight equipped with only a bow and a harpoon, but through proper utilization of these tools she is able to take out and restrain machines, as well as repurpose the scraps left over to help her take on bigger threats.
Horizon demands a higher level of tactical planning than most survival-based games do, in that you’re never going to be able to upgrade to a point where you can rush through a group of enemies. Machines have to be approached with a care and strategy that requires you to outsmart your foes instead of just taking them head on.

This sense of danger is something that games often hint at, but players have a tendency to overcome as they progress, and Guerilla seems to be making a point to make the player feel outmatched in Horizon. Thankfully, this struggle between a primitive mankind and an advanced machine race seems like the perfect stage to escape that pitfall.

Horizon: Zero Dawn is coming to PlayStation 4 in 2016