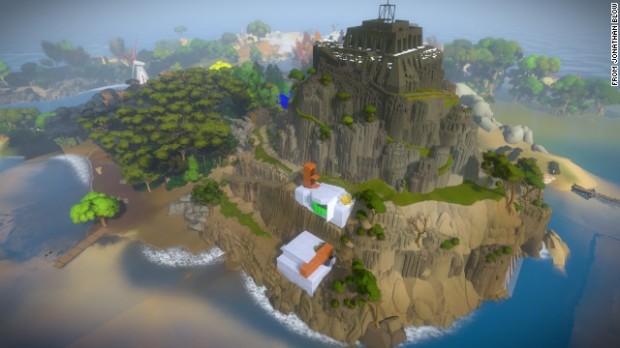 Jonathan Blow describes his upcoming game The Witness as “a world of stuff”. The meaning of this becomes clear as soon as you set foot onto the island. Go to one area and you encounter a barren fortress scattered with peculiar symbols. Another leads you into a lush forest filled with green and orange canopies. Each area feels remarkably alien, but you can’t help but sense there’s something to be learned about everything on the island.

During our time with Blow at E3, he explained that he set out to create a streamlined experience to get rid of the things he doesn’t like about certain adventure games. “As a designer, I find classic puzzle-exploration games have problems,” he said. “Among those problems, the puzzles aren’t really about anything. They tend to be arbitrary things not be solvable by any reasonable person. You have to do some random thing to read the designer’s mind.” The game is a bold departure from the normal expectations of a puzzle-adventure experience. The player encounters maze puzzles and must solve them to advance to new areas of the island.

I spent an hour on the island exploring orange forests, crumbling ruins, and bunkers reminiscent of Half-Life 2 vistas. Off in the distance, a towering fortress sat upon a mountain looking down at the rest of the island. I found myself admiring the landscape, forgetting I had a puzzle to solve or a door to open. I approached everything with wonder, not sure of my particular motive or direction. Often I would find a door that seemed familiar, but unpassable. Blow assured me this was his intention.

“Typical adventure games have this idea of ‘Hey – you need a key to get through this door’”, he explained. The Witness takes a different approach to this idea. “The key is the knowledge of what some particular shapes do or represent. On top of that, you have to bring your puzzle-solving prowess because just knowing that meaning won’t open that door for you. You have to apply it.”

After leaving what he explained as “the beginner tutorial”, the island becomes a sandbox of areas to explore. Not unlike Blow’s previous game Braid, each set of puzzles introduces new game concepts as the player progresses through the island. The idea behind this, Blow said, was to ensure the player has the information at their disposal to unlock certain areas. This isn’t to say this information is easily discovered, however. A player may encounter an unlearned game mechanic and have to leave to another area before solving it.

The total puzzle count for The Witness currently sits at 625. When I approached a particular door with mysterious symbols, which Blow told me wasn’t a hard one, I became stuck for 5 minutes and eventually backed off to a different area. “This isn’t a particularly tough puzzle, but if you haven’t run into the thing that introduces this idea, then it is relatively hard,” he said. “The puzzles in this game are very systemic. If you knew what these symbols on this door meant, you would know how to solve it. And if you had gone through the area introducing them, you would know.” This is the essence of The Witness. Certain puzzles look foreign and unsolvable, but the player must use prior knowledge to advance. You don’t have to be a completionist to beat the game, although fastidious players will be rewarded. He expects some players to experience over 30 hours of gameplay.

Blow isn’t interested in rushing a game out the door to get it onto the market. He wants to get it right. With Braid, he said the first version was done in 18 months. The final version, with completed artwork, took several years longer. The Witness is now five years in development, much longer than he initially anticipated. “I was hoping it would be done sooner, but rather than force it out by a specific date, I want it to be good,” he said. “Good is my number one priority, so we’re giving it the time that it needs.”

If Blow’s number one priority is quality, he can rest easy about his world of stuff. The Witness is set to release at the end of this year for PS4 and PC, with a iOS version following in the future.