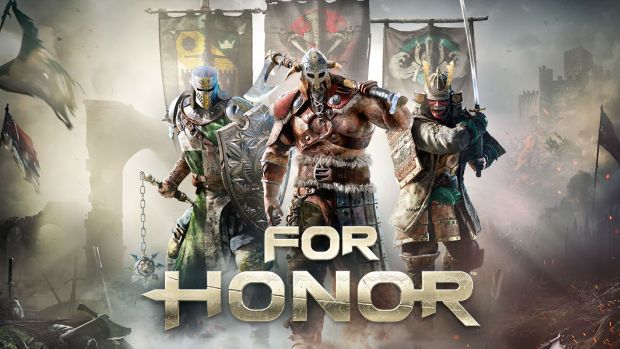 For Honor is, in my mind, the ultimate elementary school “who’d win in a fight” game.  With the classic mix of Samurai, Knights, and Vikings all joining in brutal, unflinching melee combat, For Honor is a simple concept done very, very well.

The main draw of For Honor, aside from its toybox full of badass historical warriors, it it’s melee combat system, which is close to perfection.  Unlike most melee-focused games available now, For Honor doesn’t use the tried and true “one button to block, one button to punch, one button to dodge” control scheme popularized by games like Arkham Asylum and Assassin’s Creed.  Instead, combat in For Honor is about holding your ground, timing and angling your blocks with your opponent’s attacks.  It’s a system based around paying attention to your opponent and predicting their next move, one that rewards smart planning and careful play as much as it does raw brutality. It helps that the controls are tight and responsive, and there’s enough strategic complexity to warrant a lot of practice honing your understanding of different characters.

That said, it’s still easy enough to join into a game and just play; especially the four-on-four Dominion matches.  In Dominion, your focus is split between a mix of control points you must clear out and stand in to claim for your team, an objective that most veterans of online shooters will find very familiar, and managing a front line full of NPC grunts.  While For Honor’s control scheme is based largely around one-on-one dueling, it can still be fun to rush onto the front line and take on some NPCs, which tend to fall faster than the average Dynasty Warriors grunts.  Still, you’ll find your fair share of duels in the control points when you’re done fooling around in the middle.

The 2-on-2 Brawls are a lot of fun as well, though they seemed to suffer in some areas.  Ideally, the teams should be matched enough so that the winners of each brawl end up fighting each other while both on their last legs, but it seemed to me that each one ended with the two members of one team cornering the last remaining member of the other and beating the crap out of them.  Instead of a heroic last stand, most matches ended with one player outflanked and going down in seconds, regardless of how well they were doing up to that point.  I’ve heard from some people that their opponents waited for their respective duels to end before jumping in, but that never happened to me while I was playing.  That said, given that the game is still in Beta, hopefully the matchmaking will improve before then.

For me, though, the most fun was in the one-on-one dueling.  While easily the simplest, being just a basic two-out-of-three match, there’s so much fun to be had in For Honor’s swordplay that you won’t get bored easily with it.  No other players barging into your fight, no NPC’s to kill or control points to take, just two people in a fight to the death.  It helps that the locals for your duels, from bridges over great chasms to burning hallways, are always visually interesting, and the great sound design means that every blow hits with a visceral smack of steel on flesh.  Every fight in this mode feels like the last scene of a good action movie, and there’s enough variety in the characters on display that it doesn’t get old soon.

As far as the faction war goes, the three choices are pretty well matched. The samurai appear to be the most popular, followed by the vikings. However, there was a lot of fluctuation in the battles for territory, so it will be interesting to see how that pans on as the game launches and continues to run.

While I’m definitely looking forward to playing more For Honor, it’s by no means perfect, and the Beta had a few issues of it’s own.  I was kicked out of matches due to connectivity issues quite a lot, and there were more than a few crashes.  Also, some balancing before launch would be to the game’s benefit, characters with longer reach like the Nobushi are currently at an advantage in a straight up fight.  With those small flaws in mind, For Honor still looks like a great game for anyone who wonders who’d win a fight between a knight, viking, or a samurai.