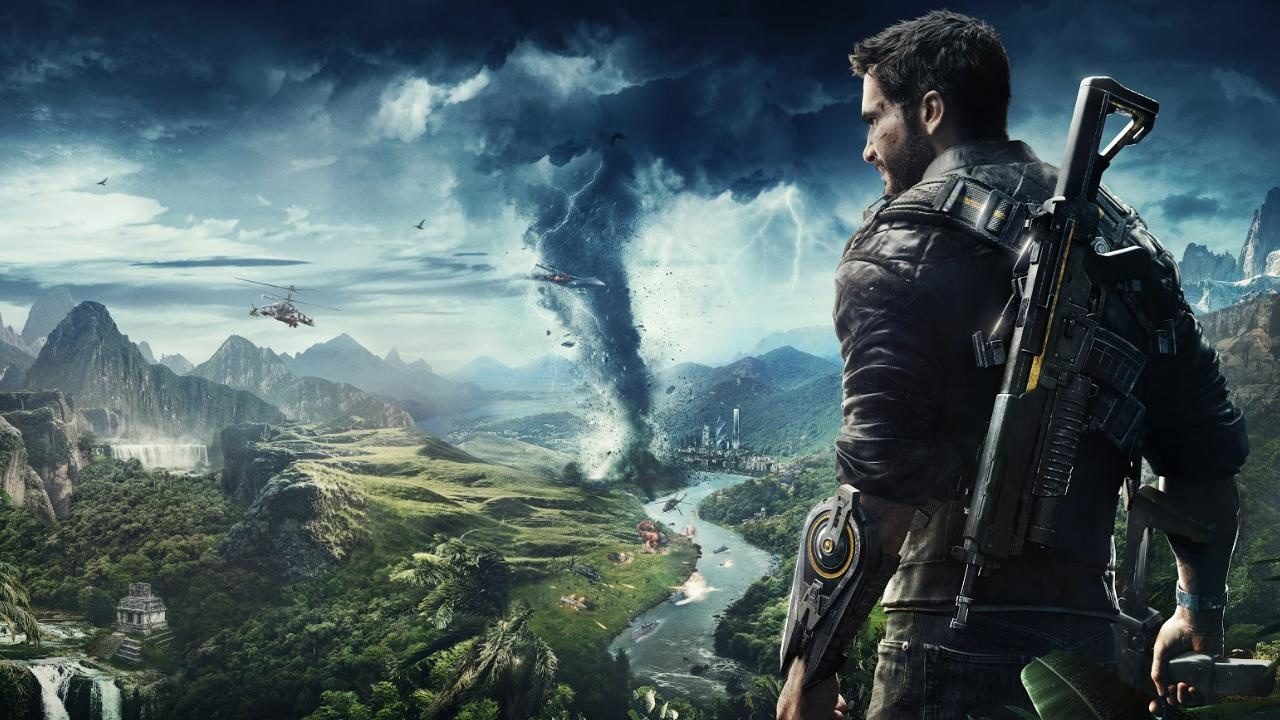 Rico Rodriguez’s story continues in the upcoming game Just Cause 4, the largest and most breathtaking sandbox game ever created by Avalanche Studios and Square Enix. The game takes place in the fictional South American country of Solís, where Rico is fighting against the Black Hand. Unfortunately, that’s about all we got in terms of story in Just Cause 4. However, there is good news! During the hands-off demo, we got a ton of information and examples of the pure destruction that exists within this game.

First, the gameplay has been expanded upon in a creative way. While players were able to take part in some fantastic grappling hook gameplay in Just Cause 3, Avalanche has taken it a step further in Just Cause 4. Now, every part of the hook is customizable. Want to smash two items together to cause some destruction? No problem. Want to add a pulse to it to make even more chaos? Go for it! In addition to retractions and pulses, you can have boosters and balloons (which you can add to objects or people), adding for some very creative solutions to problems in the world around you. In the demo we watched, Rico turned a crane holding a cargo container into a wrecking ball with a combination of boosters and balloons, wiping out a large portion of the Black Hand attacking him. A few minutes later, Rico did the same thing, but to a freestanding cargo crate–creating a getaway vehicle for himself.

This is possible because Avalanche has created a fully physicalized world in Just Cause 4. Every item around you has weight and can be used in a physical sense–meaning that it’s up to you to find the most creative ways possible to use all of the objects around you. Crates, vehicles, and buildings are not just props–they follow the physics of the game, and, maybe most importantly, they respond to the weather.

The weather may be the most interesting facet of Just Cause 4. When you see particles floating in the wind, it’s not just an atmospheric effect intended to make the game look pretty. The wind is fully simulated. When you’re using your parachute or your wingsuit, you’re gliding on actual simulated wind. This may not seem like a big deal, but it becomes incredibly important when looking at the extreme weather within the game.

And when I say extreme, I mean extreme. There are tornadoes, sandstorms, blizzards, and more that awaits you in Solís. We were shown what a tornado looks like in Just Cause 4, and holy shit. This is no background artwork, or a pretty painting in the background. The currents and strength are once again fully simulated. Because all of the objects in this world are fully physicalized, that means things will be torn to pieces by the strength of this thing.

We were shown only a fraction of this game, but I was entirely impressed. Never have physics and weather been so entirely fascinating to me, and the insane adventures that await you as Rico Rodriguez guarantee a good time. It’s obvious why we nominated this as one of the best games of E3, and I can’t wait to hear more in the upcoming months.

Just Cause 4 will be released on PC, Playstation 4, and Xbox One on December 4th, 2018. Stay tuned for more E3 coverage here on Gaming Trend.