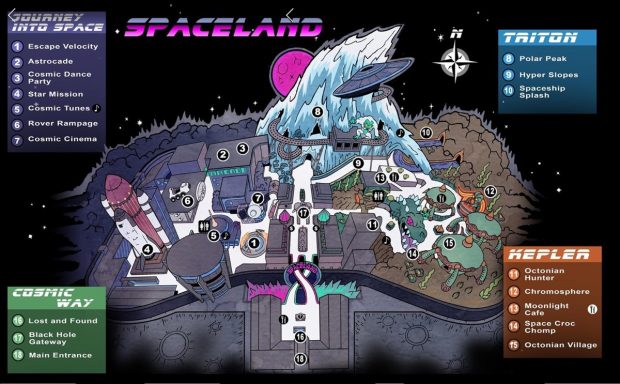 It wouldn’t be a new Call of Duty game without the fantastic addition of zombies. This newest iteration, entitled Zombies in Spaceland, is set in the 1980s, with all of its neon excess intact. Players take the role of four 80s tropes: a geek, a jock, a rapper, and a valley girl. Voiced by Seth Green, Ike Barinholtz, Jay Pharoah, and Sasheer Zamata, respectively, the team are all “aspiring actors” trapped in a horror film by director Willard Wyler (voiced by Paul Reubens). In the film, the four are trying to escape from the shambling dead while another 80s staple (David Hasselhoff as “DJ”) tries to guide them to escape.

While we couldn’t do capture of this new mode, I did get about 15 minutes of zombie slaughter in with three friends. Starting off just past the turnstyle of the theme park, we put the beatdown on a handful of zombies, banking cash to buy some starter weapons. As 80s songs thumped in the background, Hasselhoff and Reubens verbally sparred, opening the park proper for us to advance.

At one point we made our way up to a rollercoaster queue. Ripping through scores of zombies we boarded the ride for a chance to earn some tickets that we could trade in for prizes. The slow-rolling coaster gave us an M1-Garand with unlimited ammo, asking us to shoot targets for points. After a short while, we found undead targets amidst the metal variety, splitting our time between fun and survival.

At one point, one of my compadres got taken down by exploding clowns (yes, really) and expired before we could reach him. Rather than being stuck in spectator mode, he got to sit and play a ski ball minigame in the “Afterlife Arcade”. I personally would have jumped on the arcade cabinet and played the classic Atari 2600 games like Pitfall, but however you do it, if you earn enough tickets you can respawn before the end of the round.

To shake things up, there are opportunities to pick up plenty of powerups. First and foremost is the deck of five cards entitled Fate and Fortune. These are unlocked by completing in-game challenges offering up augments charged via a meter filled by zombie carnage. It’ll take a little more time to see how these are different than Black Ops 3’s Gobblegum.

The game spells a pretty large departure from Treyarch’s ultra-popular mode. The 80s theme fits perfectly, and the writing and minigames are a blast so far. It’s clear that the three-year development cycle has helped Infinity Ward create something special here. If what I played is any indication, this mode could end up being even more popular than its predecessors.