The legend of Troy is one steeped in a vicious blend of love, hate, betrayal, war, heroes, and more than a bit of mysticism. Told through Homer’s poem, “The Iliad,” Troy was besieged for over ten years by the Greek army after Paris, the son of King Priam, stole away Helen — the queen of Sparta. It’s a tale as old as time — boy meets girl, girl is married to somebody else, girl steals away with boy, boy’s friend goes to Mount Olympus and has Hephaestus forge a new suit of armor that protects his entire body other than his heel, a giant wooden horse is involved, and in the end nobody really wins. It’s a story of hubris just as much as anything else. Troy: A Total War Saga, the latest entry in the Total War series from Creative Assembly and Sega, looks to retell that story in a fresh and realistic way. You might have seen our hands-on preview with the combat systems of the game, but now we’ve had the chance to experience the extensive campaign mode. It’s time to find the intersection between legend and history.

Our hands-on time with the game focused on two pivotal heroes in this historical story — King Menelaus of Sparta, and Paris, the son of King Priam of Troy. These represent just two of the eight playable factions split between the Trojans and the Danaans. 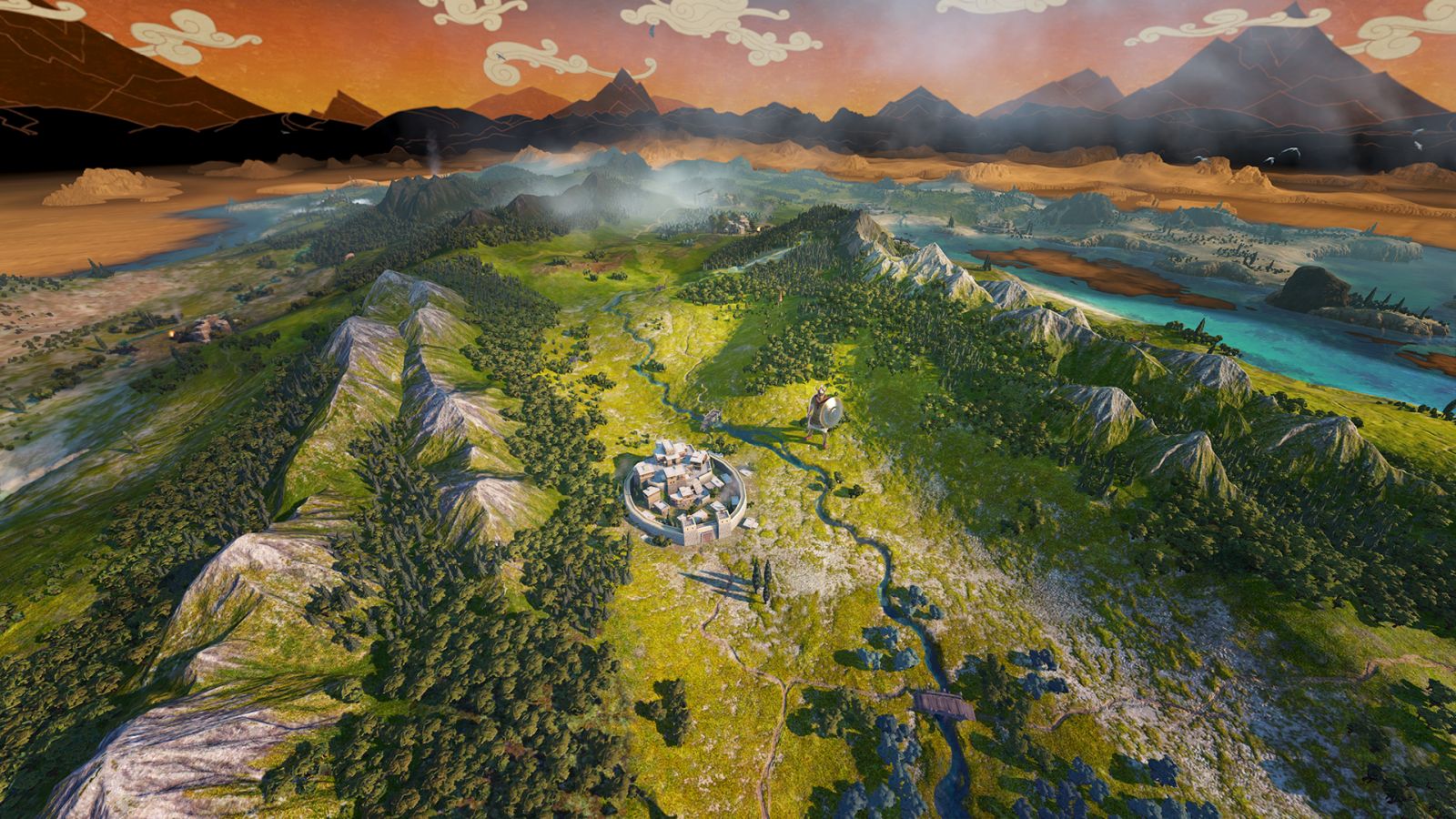 The campaign map of Troy: A Total War Saga is absolutely massive with over 250 regions and 230 settlements, including real-world landmarks like Mount Olympus, Zeus Hill, and Meteora just to name a few. The mystical elements are well represented, with a deep anchor to reality. For example, while sailing through uncharted waters as Paris I encountered “spirits” on the ocean that lead to the demoralization of the crew. In reality, I may have simply left them in open ocean for an extended period, the crew suffering from the usual doldrums of being too long at sea.

As we covered in our first hands-on preview, mystical elements are ever-present in Greek and Spartan legends. The curtain was pulled back a little further this time around, revealing the Gorgon, Satyr, Cyclops, and Seer in addition to the Minotaur and Centaurs we saw previously. Once again these are normal-ish humans shrouded in mystery due to their chosen tactics, elevating them to a mystical state. Gorgons can terrify enemy troops, demoralizing them. Satyrs are the opposite, spreading joy and mirth which helps with productivity for your crew. The Cyclops is a giant of a man wearing a single-eyed bone helm who is brutal in close combat, but wears no armor. Seers specialize in rituals and prophecy as you would expect, helping to appease the gods — a more nuanced mechanic for this series. 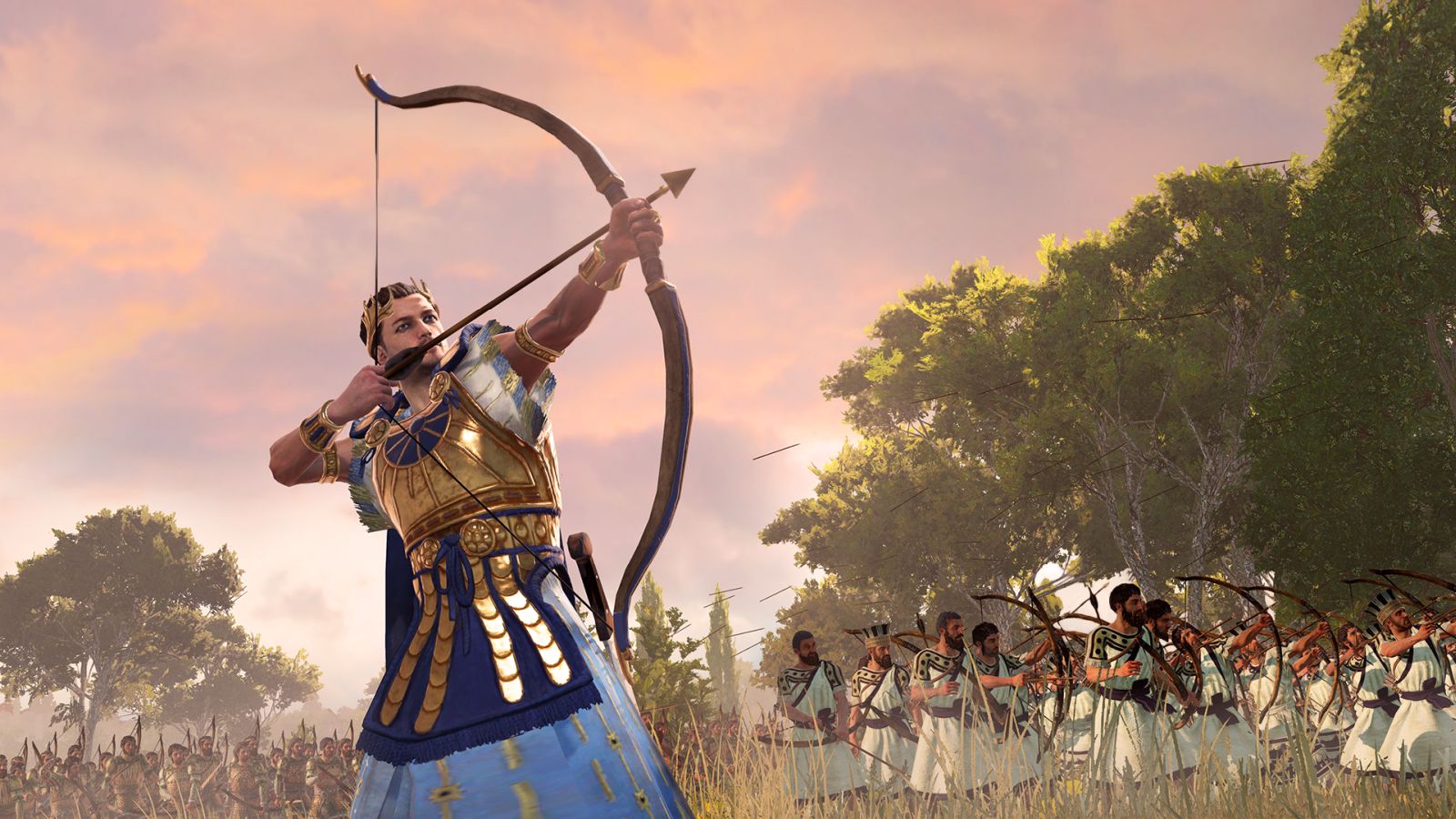 There are a few new tricks with Troy: A Total War Saga. During our 40-turn demo I got to see a change to the trade system. Now I could make single transaction barter agreements, helping to grease the palms of my opponents to curry favor, or I could set up an ongoing trade agreement, helping me to obtain goods I couldn’t easily get in my own region. This helps with the pressure of balancing five resources — a change for the resource economy in the series. In Troy you have basics like food and wood, but more advanced structures will require stone and bronze. Gold, being the most rare of all, is used for the top tier of upgrades and improvements to your structures. I had one faction so desperate for gold that they offered one of their minor settlements for just a handful of the stuff. Foolhardy for them, fortuitous for me.

The ancient Medeterranean is filled with stories of vengeful, wise, and occasionally benevolent gods, and Troy is no exception. Here you must balance the “divine will” of the gods to curry their favor. Each of the seven gods (Zeus, Hera, Aphrodite, Ares, Athena, Apollo, and Poseidon) carry their own advantages. If you plan on focusing on growth and production, Hera, Zeus, and Aphrodite can provide. Ares and Athena are the gods associated with war and wisdom, offering bonuses for your troops and better command. Pouring more adulation into a single god yields higher “tiers” of rewards, and you can appease more than one, but there is one problem you’ll need to solve. The gods are capricious and fickle, requiring constant adulation. As such, without constant attention, their interest will wane, as will their favor, eventually dropping off entirely. If you want their blessing, you’ll need to make regular and ever-increasing tributes. 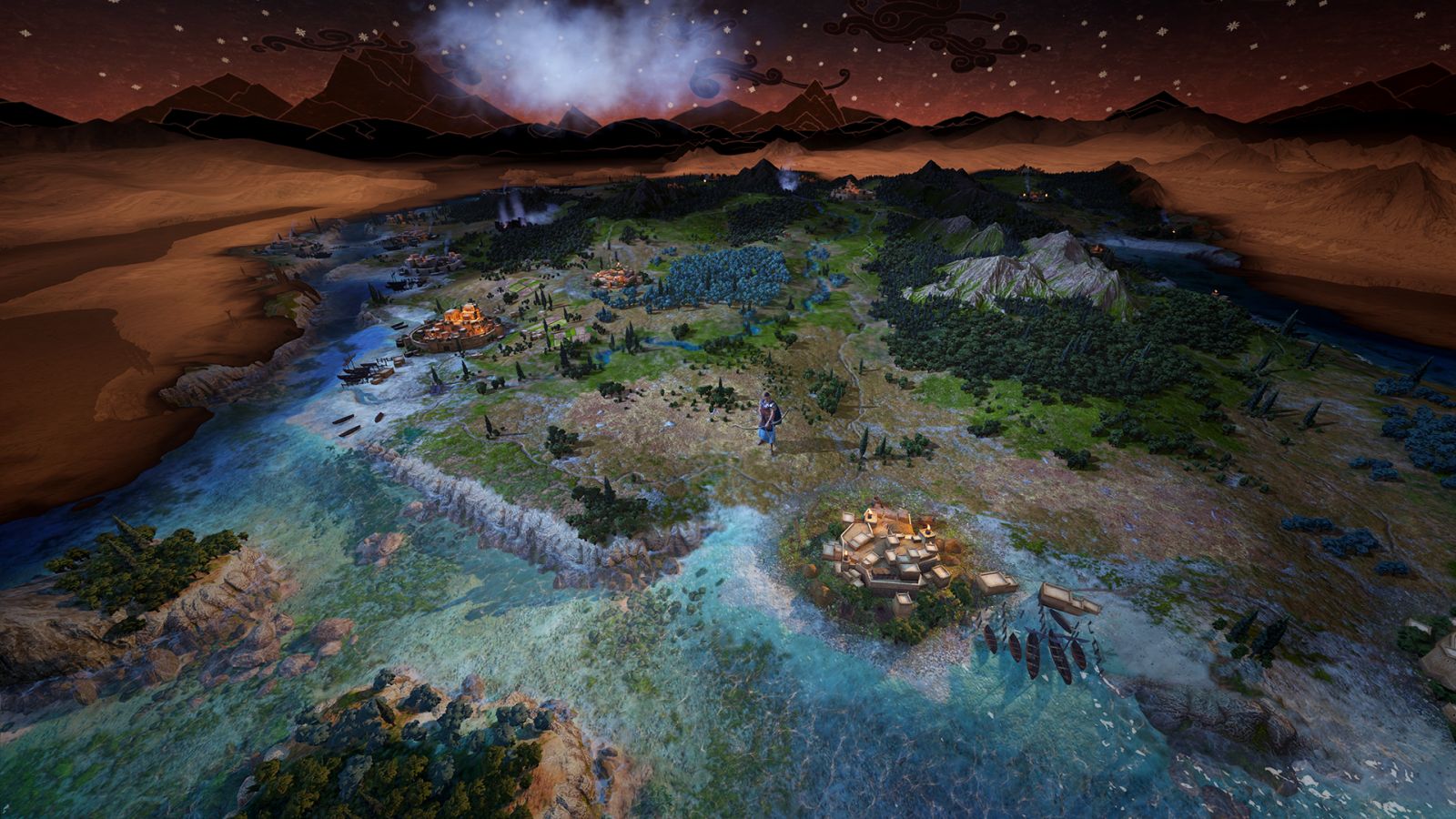 Beyond deity meddling, there are some new mechanics for units. We talked about the different unit strengths (light, medium, heavy) in the previous hands-on, but now these new mechanics extend to their leadership. By way of example, Paris has a better disposition the closer he is to whatever settlement Helen happens to be in. You can have her travel to different cities to remain closer to Paris, though he will become melancholy and surly, affecting his troops and his performance in the field the longer he is away. Complete with his own issues, Paris suffers at the hands of his father, King Priam. You see, Priam is trying to decide which of his sons will become heir to the throne (he was rumored to have sired 50 children, but this game is thankfully focusing on just you and your brother Hector), and every action you take will be judged. He will give you tasks that will almost certainly disrupt your battle plans or land at the worst possible times, giving favor to your brother should you fail, or heaping praise on you for success. All faction leaders also have Homeric Victory Conditions such as razing a certain amount of settlements, completing heroic tasks, and controlling specific cities, leaving two paths to victory — follow history, or change it through total war.

Each hero has a number of special skills and attributes they can unleash in the field. Paris, being a world-famous archer, also has the best archers at his command. Menelaus on the other hand can recruit units from any faction, as well as occupying any settlement at a distance without having to send an army to raze it, at the cost of additional resources. Agamemnon, King of Mycenae is a good mixture of ranged and heavily armored infantry, and is able to entice other factions to become his vassal. Everyone has a power that can unbalance the game at any time, so you’d best know what your foes are capable of as well as concentrating on your own skills.

From a technical perspective, the game’s engine also receives an upgrade for Troy: A Total War Saga. The team has added screen space reflections, upgraded water shading and better shore interactions, grass is more dense and bends around the legs of your army. God rays and a glowing softness showcases the lighting engine beautifully, as does some solid animations. In-engine videos are now 60fps, loading times are noticeably improved, and there’s even an “arrow trail opacity” slider so every volley doesn’t look like tracers on a modern battlefield. 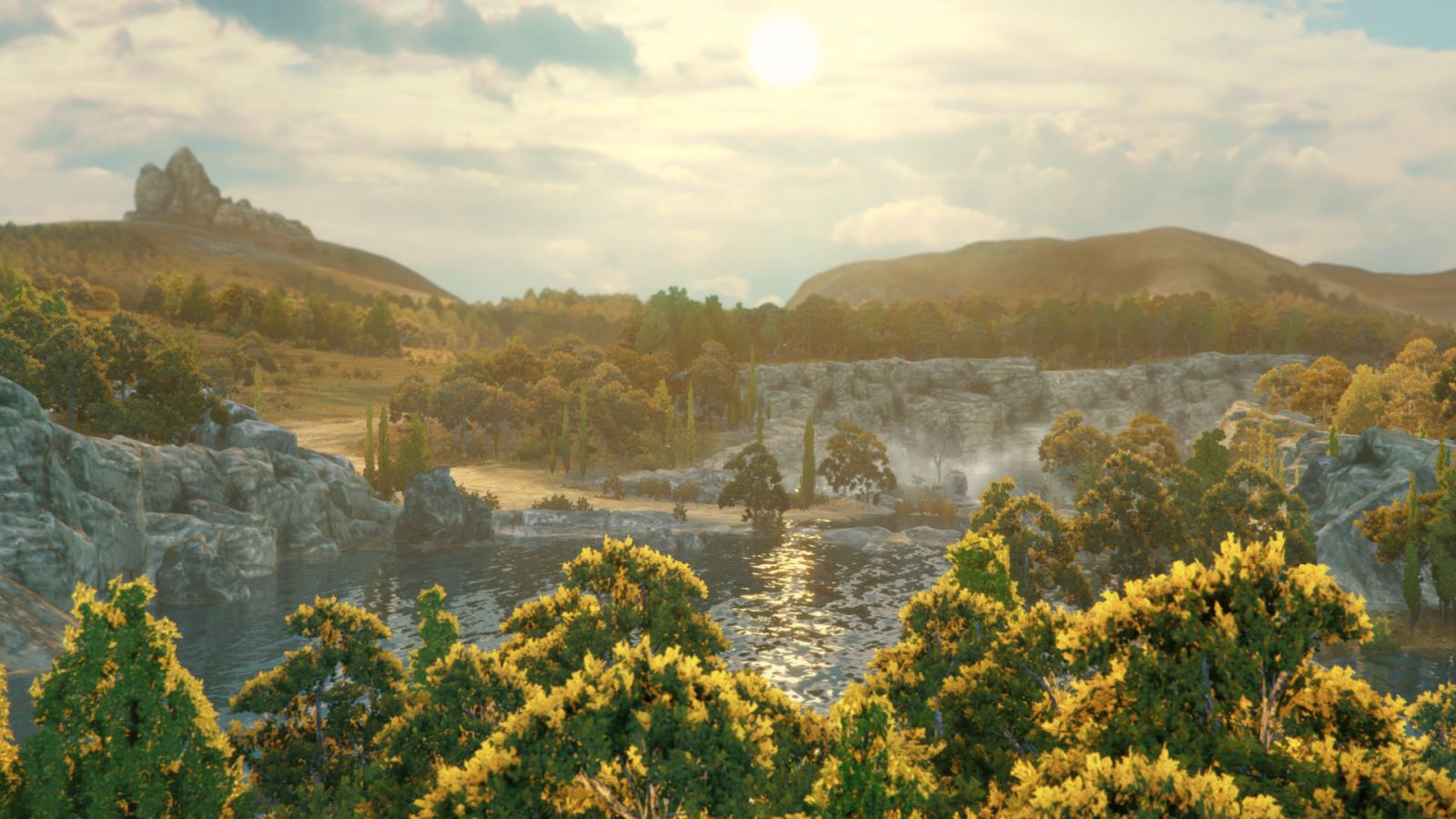 After a few more hours with the game, it’s clear that Creative Assembly Sofia is eager to showcase their strength on this first full Total War title under their belt. The new additions to the campaign structure and the fresh take on incorporating the myths and legends of the time make for a good twist on the formula. It’ll be interesting to see how it all comes together to create a cohesive tactical world.