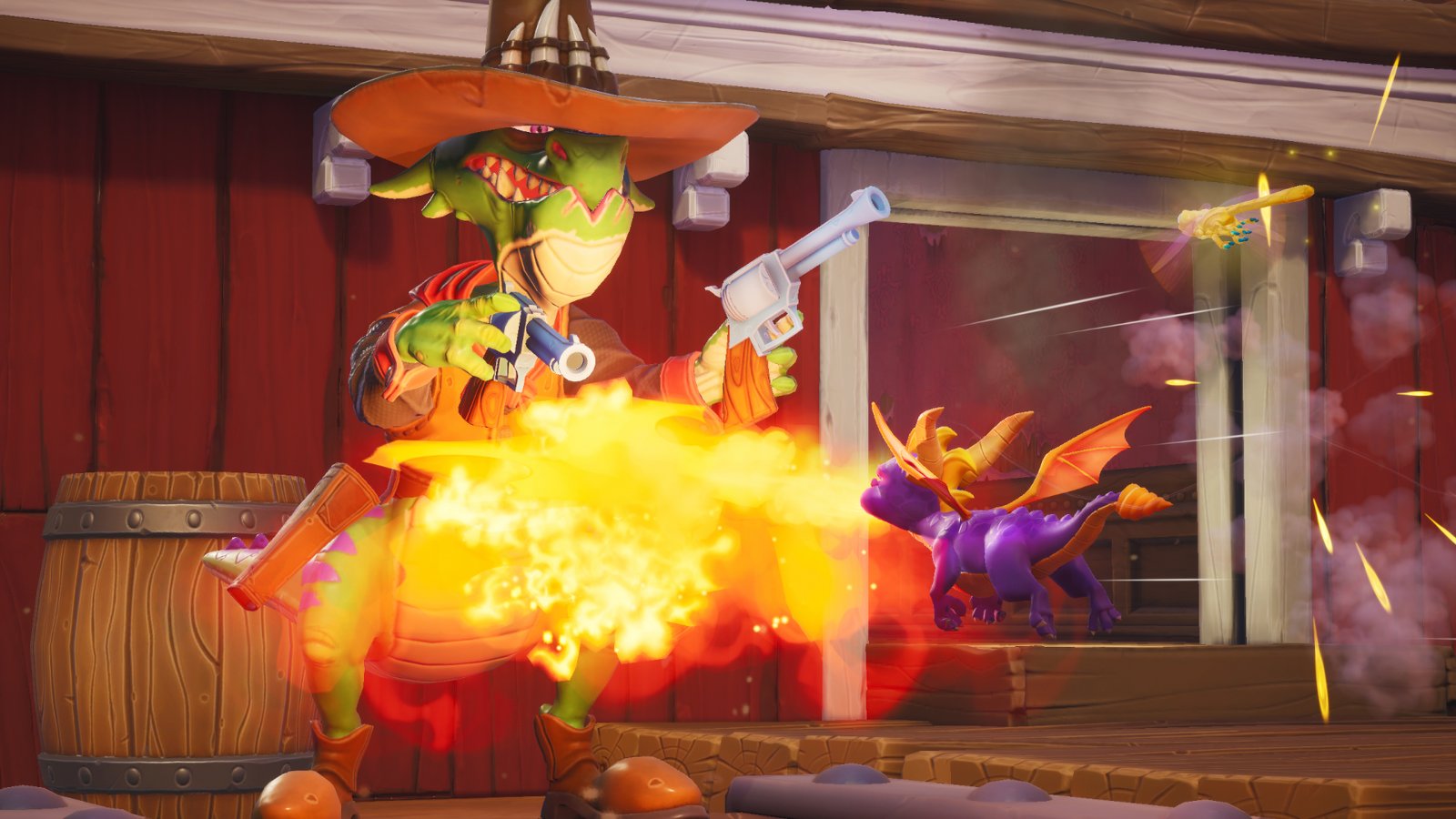 Since its announcement earlier this year, the Spyro Reignited Trilogy’s flame only burns brighter with each passing day. At E3 2018, we had a chance to take a look at the first game in the trilogy, Spyro the Dragon. From there, we experienced that each of the freed dragons were absolutely oozing with personality with each of their designs telling a story not only about themselves, but the world as a whole. Recently, I had a chance to visit the Toys for Bob studio, where I spoke with the team in charge of bringing more life into the dragon we all know and love and get a chance to play another level from Spyro the Dragon as well as levels from the other two games in the trilogy, Spyro: Ripto’s Rage, and Spyro: Year of the Dragon.

Before diving into the game, I learned more about the care that was poured into the series. Peter Kavic, senior producer for Toys for Bob, talked to us about the series and how important it is for them to make this game right. Fan input has been very important to them, and it shows, as he had a corkboard by us full of fan letters and fanart that was sent to them from excited fans around the world.

The love poured in from the art team also shows. Unlike the original game where several models represented most of the dragons, each dragon has its own unique design based on its homeworld. The dragons in the Artisans Homeworld will have some sort of artists flare, like one with a paintbrush and easel. Dream Weavers dragons will have everything related to dreams and sleep with one of the dragons rocking on his body while knitting a body-sock like he’s on a rocking chair. Magic Crafters dragons have more of a mage-like quality.

The small touches to the environment help build the world and make everything feel more interactive as well. While the grass can be burned with a fire breath, it also sways with every swish of Spyro’s tail, and burns when Spyro sneezes fire during an idle animation. These animations are helpful for establishing more subtle characterization as well. After Spyro sneezes, Sparks will fly up to him and give him a concerned look.

Speaking of which, Sparks is much more expressive this time around. In a rather risky change, Sparks has been given legs, which allows him to wave at the camera if the player refuses to move for a while. He’s gone from being a cute little buddy to being ridiculously adorable. As Sparks is the health indicator for Spyro, his animations will change as he changes color. When Spyro is hit once, Sparks turns blue (like in the original games), but he will appear slightly weaker. When he’s at his weakest form (green), his tail will droop and his eyes will twitch. It almost breaks our heart to see him having such a bad time.

In order to re-energize Sparks, you have to find butterflies, and most of these butterflies are found by roasting innocent creatures, who have also received a vibrant facelift. You almost feel bad for these animals, but a dragonfly’s got to eat. Toys for Bob had a surprise for us halfway through our visit. Just outside of the studio, they set up a petting zoo full of animals that Spyro can roast (and an alpaca!). This surprise was cute, and hilarious, if not a little morbid. This was just another example of how Toys for Bob are enthusiastic about handling the Reignited Trilogy.

As I’ve already covered how Spyro the Dragon feels in a previous preview, this time I had a chance to play a level from each game (Stone Hill, Idol Springs, and Sunny Villa) and later an additional level from Spyro: Year of the Dragon, Dino Mine. Stony Hill’s facelift gives me more confidence that Spyro the Dragon is in good hands.

Idol Springs, one of the first levels from Spyro: Ripto’s Rage, was the first time we see a level with an intro sequence in the trilogy. Each intro to the stage has a cutscene based around the level’s plot, and often times, these jokes weren’t conveyed well enough. In the Idol Springs cutscenes, idols come to life and attack the workers that made them. One of the workers sees this, and creates a female version, but as he tries to kiss it, it falls over lifeless. In the original game, I wasn’t entirely sure what he was trying to do in this cutscene, but now, it’s incredibly obvious that he was trying to make it come to life.

The level itself was as vibrant as Stone Hill from Spyro the Dragon, so If anything, it feels like everything is more visually consistent, with slight variations on mechanics between the three games. For example, Spyro: Ripto’s Rage adds a new mechanic where you can press the triangle button to do a quick hover after gliding, giving you slightly more air to make it onto a platform. This is comparable to Crash’s sliding that appears in Crash Bandicoot 2, but it’s not as much of a drastic change.

I had a chance to check out two levels from Spyro: Year of the Dragon. This game added a few experimental ideas, such as skateboarding segments and playable animal buddies. In Sunny Villa, there is a segment where Spyro hops on a skateboard. On the skateboard, you automatically move forward, but can jump on slopes, perform tricks such as flips, and breathe fire on unsuspecting mischief makers. When I was younger, I remember these segments feeling awkward, with the skateboard not feeling as tight as it could, but this time I felt like I had complete control. I’m not sure if it’s just a placebo effect, but the skateboarding segment is nothing short of a blast. I’m excited to see more of these later on in the game.

The other level I had a chance to check out was Dino Mine. This is a level from later on in the game, so the difficulty is obvious from the beginning. If the dinosaurs aren’t roasted quickly, they will flip their guns and fire towards you. There are also dynamite wielding dinosaurs that will throw explosives in your direction, but dashing up to them quickly is the best way to take them out. This level fully embraces the western feeling, and that theme carries over to the animal buddy segment in the level, which features Agent 9 in an on-rails gallery shooter.

Normally, Agent 9’s segments are a third person shooter (which is greatly aided by the addition of a second stick on the dualshock 4), but here, it’s a first person perspective gallery shooter where you have to blast as many dinosaurs as possible. It’s a short detour from the main level, but there’s still more to explore after all of the dinosaurs have been eliminated. I wish I could have faced some of these dinosaurs in his standard third-person styled shooter, but it was still fun to blast through the dinosaurs like I was playing an arcade game.

The last thing I need to talk about is the music. Stewart Copeland’s tracks in the original games are beloved by the entire fanbase, and Stephan Vankov does a fantastic job of remastering these tracks without changing what made them special. The new soundtrack comes with a special Dynamic Music feature, where the music will change slightly based on different conditions.

If you are walking around normally, the track will play as normal. If you stand still for a while, the music will slowly fade, giving more priority to the ambient sounds surrounding Spyro. If you are charging, the percussion will become more intense. And finally, there is an inside variation that features more reverb, as if the music is echoing off the walls. In addition to these variations, there is different variation of the track for later on in the level. In the original game, the music would stop and restart. This time, the track will continue, but will have some slight difference over how it was originally played. This variation will also have the altered effects as well.

Spyro Reignited Trilogy is one of the most ambitious remasters of our generation. Toys for Bob have been working hard to make sure that they’re creating the Spyro we remember when we were kids without changing what makes the games special. It will be released on November 13th, 2018 for PlayStation 4 and Xbox One.