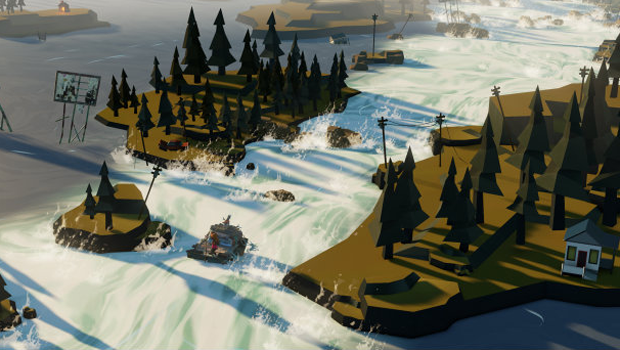 Steam’s Early Access service is constantly bombarded with roguelike survival games, but The Flame in the Flood from The Molasses Flood gives direction to what is normally an aimless genre.

The Flame in the Flood follows a girl and her dog rafting down a Louisiana Bayou-inspired river in post-societal America in order to find other humans after a massive flood.  In order to survive, the human-animal team has to make pit stops along the way to find shelter from the elements as well as hunt for food and water.  Anyone who has played Don’t Starve will be familiar with the struggle of finding resources that The Flame in the Flood brings to the table, but instead of establishing a base camp and building it up like in Don’t Starve, every landing is a new start, and a new chance to die.

Gameplay breaks down to two main sections — surviving and rafting.  During survival sections, you’ll be hunting for food, water, or crafting supplies while you hunt for something to hide in during the night.  Ideally, once you’re all healed up, you’ll head back to your raft and take to the river.  Not so ideally, you’ll be running for your life to your raft while trying to escape a wolf.

Rafting portions focus on avoiding rocks and rapids while finding a safe spot to dock.  Certain status ailments, like tiredness or broken bones, will make it harder to push your raft downstream.  It’s at these points you’ll want to find port wherever you can, and hopefully find something to cure what ails you.

The Mollases Flood describes their game as rogue-lite, but don’t think that means it’ll be a walk in the park.  In my first playthrough, I died after about five minutes because I drank some questionable water, resulting in a nasty bout of dysentery.  My second try resulted in some broken bones after a nasty crash on the river rapids, making it difficult for me to paddle, which ended up with more crashes, more broken bones, then eventually death.  Even though I died so often, I still felt like I’d made a measurable improvement each time.

Crafting is central to The Flame in the Flood, and it’s much simpler than many of its competitors.  There’s no guessing at recipes or looking them up online; everything you can craft is listed in a menu and their ingredients are plainly laid out.  Crafting is key to survival, enabling players to trap animals, heal wounds, and get some equipment to help you survive the various weather conditions you’ll experience while traveling through the wilderness-reclaimed south.

While all the tropes of a traditional rogue-like are present, The Molasses Flood takes a more direct narrative focus for their game than most others in the genre.  There are still plenty of emergent moments, like making it to shelter just before a bad storm hits or finding that one ingredient you need right before your demise, but finding civilization down river is key, and one of the game’s developers did assure me that the game had a concrete ending.

Transitioning from day to night is something to behold; as the environment goes from the welcoming warmth of the deep-south sun to deeply dark, bitter nights, you’ll feel the oncoming dangers just as much as you can see them while you hunt for a safe spot to sleep.  That fear is punctuated by a subtly disturbing yet simultaneously beautiful art style.

The true triumph of The Flame in the Flood is the way that all of its part work in symphony.  The beautiful and contrasting aesthetic, cheerful to fearful original music, and rewarding gameplay all come together harmoniously to deliver a realized experience that is much greater than the sum of its parts.