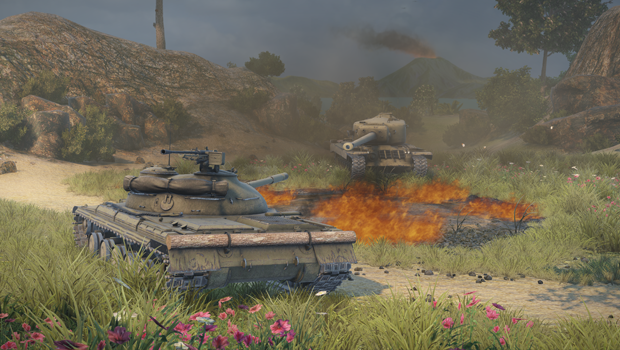 World of Tanks is a free-to-play powerhouse on the Xbox 360. Since it launched in February 2014, Wargaming has had over four million unique players, 40 million battles, and 60 million hours of ground warfare logged. People love World of Tanks, and the stats show it, with the average play session lasting four hours, higher than anything other than the leading MMORPG’s, according to Wargaming’s creative director and executive producer TJ Wagner.

So it’s a no brainer to bring the game to Xbox One and offer it to a wider audience, but Wargaming has proven that the switchover is everything but a cash-in on the franchise’s success. First and most importantly, you’ll be able to compete against players on Xbox One and 360 simultaneously with a completely smooth transition for anyone who wants to play on both systems.

“I’m playing with QA staff downstairs. They’re playing on 360 and I’m playing on Xbox One,” Wagner said as the matchmaking lobby filled up. “It all works seamlessly. You’ll also be able to switch between platforms seamlessly. There’s no moving or transferring your account, it just syncs to the server so you can play on 360 then One, then back to 360 as much as you’d like.”

“We thought it was really important for players to maintain the ability to play with each other and not just have an individual product that would segment the population… [and] we didn’t want to penalize people for moving from the 360 to the Xbox One,” Michael McDonald, Wargaming’s Chicago based studio’s general manager, said. “A lot of times, when you’ve bought yourself a new console and your friends haven’t come along the way and it really sucks when you want to play then you have to go back to your other console, and you don’t have to do that now.”

The Xbox One will include additional features ancillary to the gameplay, such as integrated Twitch.tv streaming, instant replay, uploading screenshots, and many other social features. The previous generation of consoles, however, are far past their prime as far as hardware, and Wagner noted the limitation during World of Tanks’ previous development.

The team at Wargaming is going to great lengths to utilize the upgraded visuals of the Xbox One. “We’re rebuilding the tanks from the ground up,” Dawson told us. “Some of the more complex tanks are up to 50,000 polygons and we’re authoring the textures in 4K resolution.”

Individual pieces rattle on the outside of the tank and meticulously rendered tread tracks form on the ground underneath. Shovels, picks, rivets, and vents decorate the hulls, not as textures like in the Xbox 360 version, but as full on 3D models. They clank and shake as the tank moves along, bringing the whole thing to life.

“We can throw millions of particles on Xbox One so we can make some really nice looking smoke and volumetric fog, more realistic flames and explosion,” Dawson said. “There’s a little too many flowers for my liking. At one point… there were butterflies flying around and I was like, ‘C’mon guys, we aren’t making a bunny simulator.’”

New technology allows water and clouds to be rendered in real-time. “Usually that’s done with a scrolling texture, but now when a storm rolls in, we can actually get clouds coming in from different directions.”

Dawson continued to show me the map Abbey, which is pretty much the Dust2 of World of Tanks. “We’re implementing the latest Havok physics… so we can do more advanced destruction effects and take a building down shot by shot,” Wagner explained as he blasted a tower apart one section at a time, leaving behind dense black smoke and roaring flames in its wake. HDR lighting along with high particle counts really sell the impact of each shell as you lob them at buildings and enemies.

In developing the Xbox One version, Wargaming was also able to enhance the Xbox 360 graphics as well. Players returning to the 360 version of the game will notice new lighting, specular maps and more when the Xbox One version is released. Longtime PC players might also benefit from the improved tank models of the second console release of World of Tanks as they make their way to the PC .

Playing the Xbox One version of World of Tanks was very much like what I was used to playing on the Xbox 360 as far as gameplay was concerned. Tanks controlled and aimed impeccably, but on Xbox One everything had that extra “oomph” that made hits so satisfying. Rumbling across an open field and blasting through enemy cover to reveal their position was punctuated by robust sound, including that definitely fulfilling “CLANG-CHUNG” made after firing, along with layered and complex explosion visuals and audio. The Xbox One version of World of Tanks is far from a simple port of its 360 counterpart, and even though you can play across both systems, you’ll realize what you’re missing the moment you boot up your old console.

In my extensive hands-on time with World of Tanks, it’s extremely clear that it is a labor of love by the developers. They would laugh, congratulate players on good plays, trash talk, and engage in a little friendly competition. More than once I heard team members say, “It’s so nice to work with a company where I actually play the game I’m making,” and that sentiment is at the center of their work. It’s evident that the effort put into World of Tanks is devoted to make the game more fun, not only for the players, but for the developers as well.

“We’re not in this to try and nickel and dime the player every time they have a battle,” McDonald said. “We’re in this for the long haul. We want players to be around for several years.”

A lot of that care for the player comes from a group that focuses on interfacing with the World of Tanks community.

“We have a small team that just takes input from the forums and social networking,” Darold Higa, a producer for Wargaming, said. If a tank is overpowered or a bug makes it past the initial wave of testing, the team can immediately find out from the boards.

Players can also suggest features online, and Higa’s team can relay them to the development office where they decide whether or not to implement those ideas. This process has seen several key features, like state flags and several preloaded tank kits, added to the game.

Wargaming worked out many of the kinks, especially on the publishing side of things with Microsoft, during development for Xbox 360, which has afforded the team more time to polish the Xbox One version to a mirror sheen.

“There’s a lot of firsts that we did with Microsoft, and fortunately it’s making it easier launching this time around on Xbox One,” McDonald said. “We had to introduce stuff to Microsoft about how to support an MMO on a console.”

For example, “supertesting” is a term that the Wargaming team uses to describe the large base of dedicated World of Tanks fans on PC who test new patches before wide release, and transitioning that process to Xbox 360 was difficult.

“In the console world, usually you have an open beta weekend once before you launch the title and it never happens again, maybe it’s a month long at the most. We have a continuous beta that’s ongoing on console, and that was a brand new idea for Microsoft,” McDonald told us. “We told them we wanted to do it forever, and they thought we wanted two months. Once they understood… how important this is to our type of game… they embraced it and set up new ways to handle [World of Tanks]. We’ve helped work out their policies [for free-to-play games] and they’ve helped us get the game on their platform.”

I hesitate to even call World of Tanks on Xbox One a “port.” The word immediately conjures up images of a small, underfunded team, usually at a different studio, dragging and dropping files one by one until they’re compatible with another machine. They’re mired with the worst kinds of bugs that impede and at times even halt the player’s entertainment.

What Wargaming has brought to the Xbox One feels more like a remaster. The gameplay is almost exactly what was released over a year ago, but every bit that was lacking has been enhanced by the powerful new hardware. World of Tanks for Xbox One is the definitive version of Wargaming’s masterfully crafted MMO action title, and it’s coming to your system in Q3 2015. Time to mount up and charge the field.