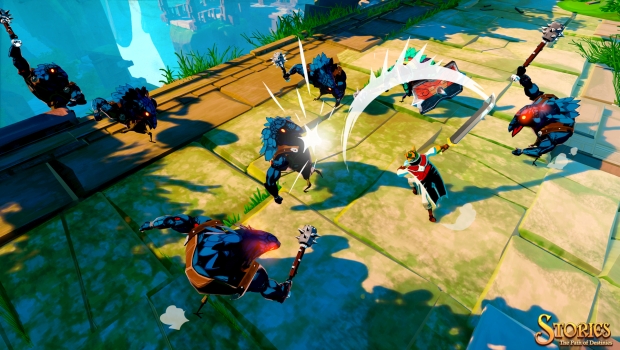 Here’s an honest confession: I try to avoid making appointments for the same game two shows in a row. It becomes a little odd to play through the same bits of game again, with the same people, only months or sometimes weeks apart. You know all the motions, the bullet points, and unlike what romantic comedies taught me, finishing each other’s sentences (in the context of a show floor demo) is not cute. It’s just awkward, like repeating a course in college just for the GPA boost.

I made an exception to this, however, for Stories: The Path of Destinies. After my interest for this game spiked from zero to “I need more why did this demo end” at last year’s PlayStation Experience, I was excited for a second go at PAX South.

Luckily, Stories is a game that lends itself to multiple playthroughs, even in the early preview I played. The game is built upon different paths you, as the dashing protagonist Reynardo, might take in the days before the climactic battle with the Empire. Do you trust your friends, or seek an ancient weapon? Answer the call of an old lover, or seek some other avenue?

So this time, instead of pursuing an ancient weapon, I went to help my friend in need. Might as well try the other side, right? What I found was a whole trove of new content to explore: new areas, new enemies, items I hadn’t encountered on the other side. I found a potent use for my fire sword, as well as upgrades for my current equipment and skills that I hadn’t seen in my other story.

The art style was more noticeably vibrant too, as instead of deep caves, I was exploring a town surrounded by lush meadows and bright flowers. It was outside and in the daytime, and Reynardo’s sword gleamed as I dashed to and fro around the different arenas.

Combat was as smooth as ever, and with my earlier experience, I began to feel the joy that comes from mastering a combat system that flows together so well. After a short period of reacquainting myself with the controls, I was back to dashing about, hooking over enemies and shoving them aside, parrying slashes, and grabbing enemies and tossing them off cliffs. The swordplay just flows so well in Stories, as smooth and defined as games like the Batman Arkham series or Shadow of Mordor.

In helping my friend, I gained an ally and got to see a bit more of Reynardo’s character in his interactions with his scoundrel pal Lapino. I also got to see how some of the branches might change in context or story as the game progresses down different paths.

Previously, I had the option of going to visit an old relationship of Reynardo’s, in order to ask her for information. With Lapino on my team, though, he had a different idea: we kidnap this ex-acquaintance and interrogate her for information. Would that change the way the level played out? Would Lapino’s presence affect my relationship with other characters, and thus my ability to progress? I was already seeing the cogs at work in Stories, which boasts a number of paths through to different endings, and I was excited to see them turn even more.

So while I broke my cardinal rule, I also found something even more to love about Stories, and more reasons to (figuratively) count the days until release. My demo at PAX South solidified it: I was going to play this game a lot when it came out. Though hopefully not on a show floor with a bunch of other people again. I could use some privacy when I’m making these tough decisions.

Stories: The Path of Destinies will be released in spring 2016 for PlayStation 4 and PC.