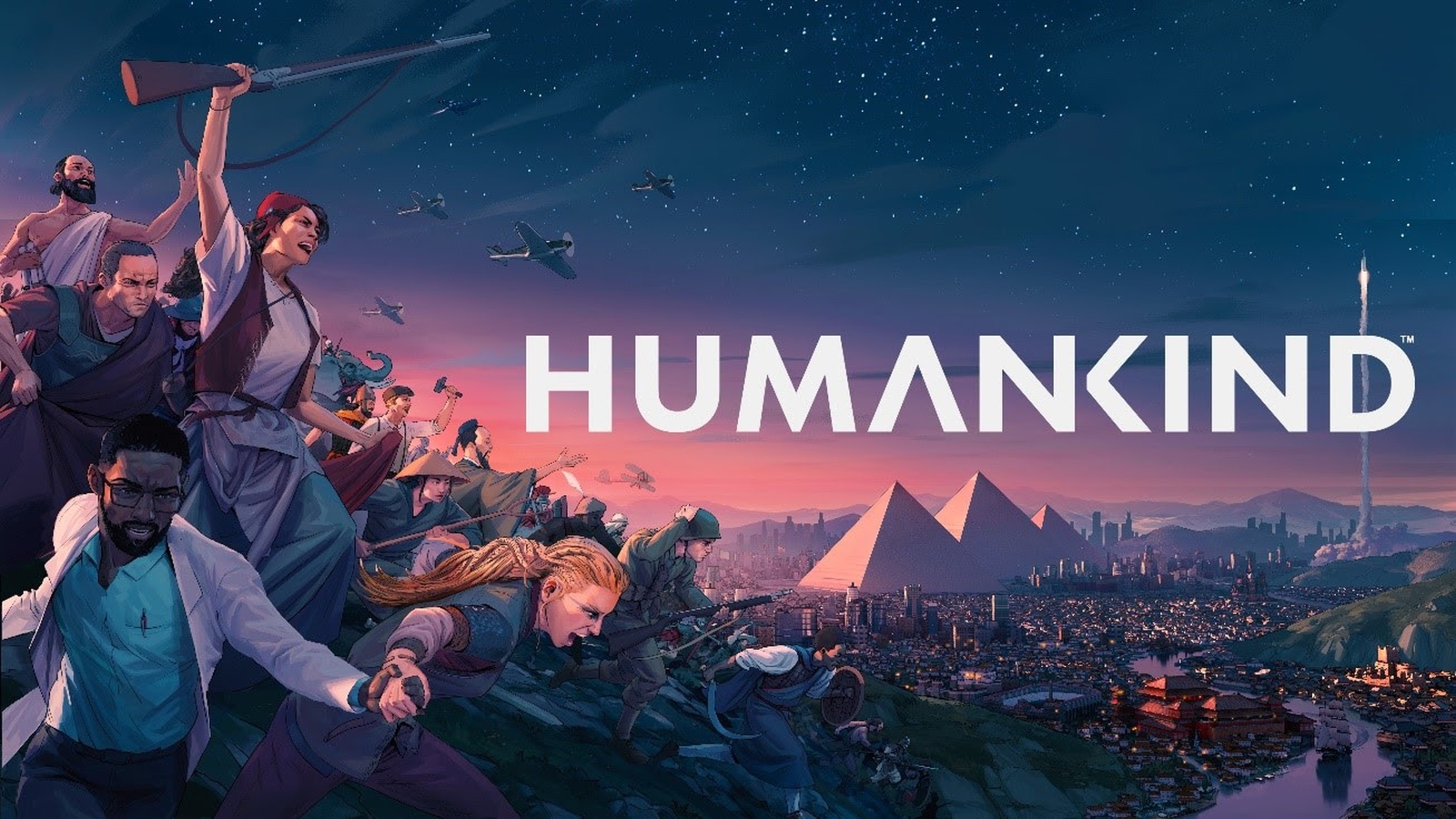 It’s been a while since I last played around in Humankind, the upcoming 4X game (Explore, Expand, Exploit, Exterminate) from Amplitude Studios and Sega, and wow… a LOT has been added! A select few members of the press got treated to a live event where we got to talk to Narrative Director Jeff Spock and Lead Game Designer William Dyce, followed by 24 hours of hands-on gameplay with the latest Humankind build.

The last event I participated in was specifically based around testing out combat. It was still in an early build, and I only got to see and test a small slice of what the game has to offer. While it was definitely enjoyable, Humankind was much more fleshed out this time around. I initially intended to hop in for an hour or two and see what all had changed, but I ended up playing for closer to ten hours. I played so much I had Humankind dreams that night. 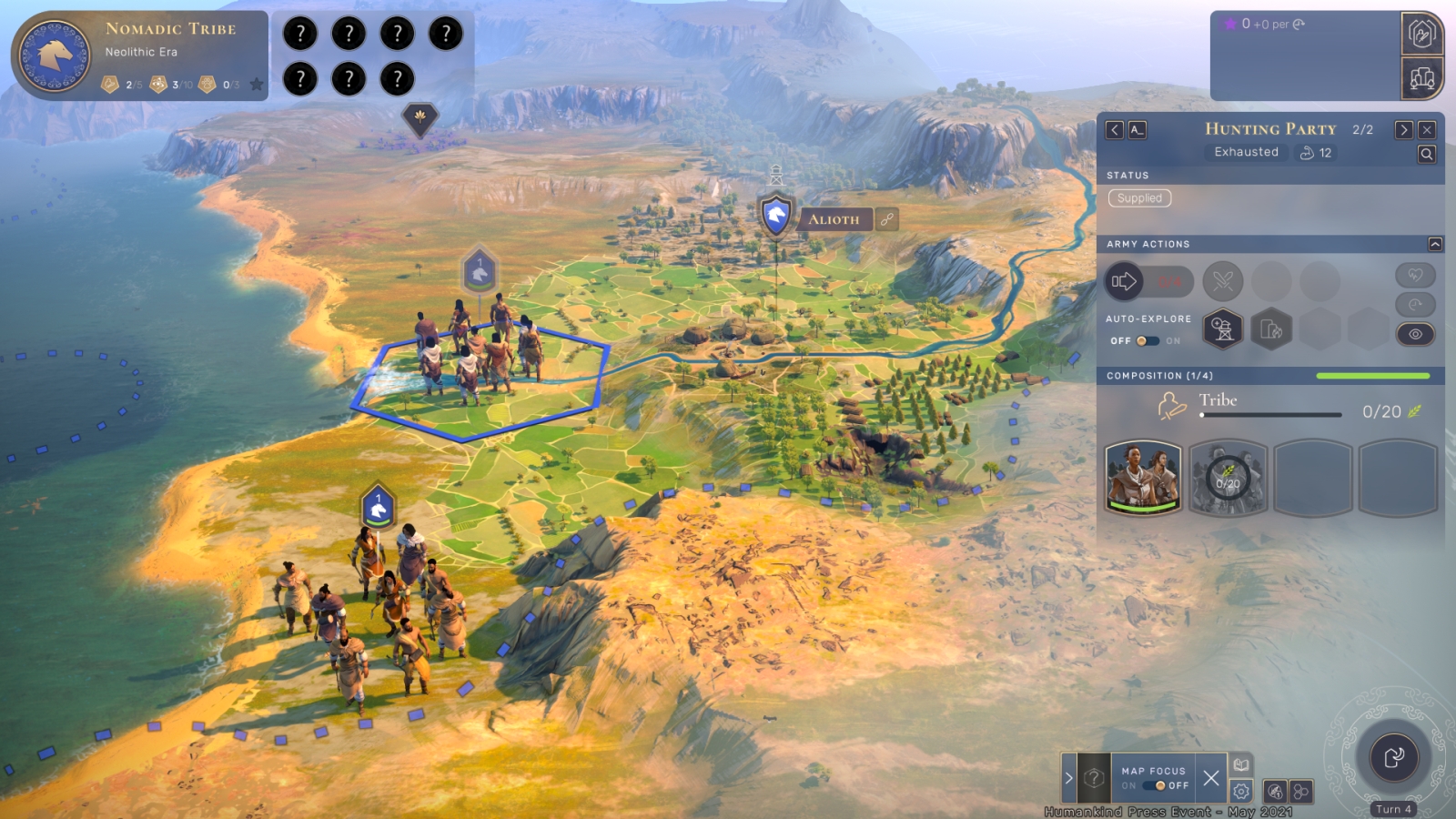 The beginnings of my mighty empire!

For this playthrough I chose to start from the Neolithic Era and picked the Egyptian culture. Since I last played they’ve added in the Diplomacy feature, Religion and Fame, deeper city management, and quite a few new eras and cultures. Something else that was really fun which I had not seen before were the choices to build Cultural Wonders, such as The Pyramids at Giza, Hanging Gardens of Babylon, and Notre Dame. 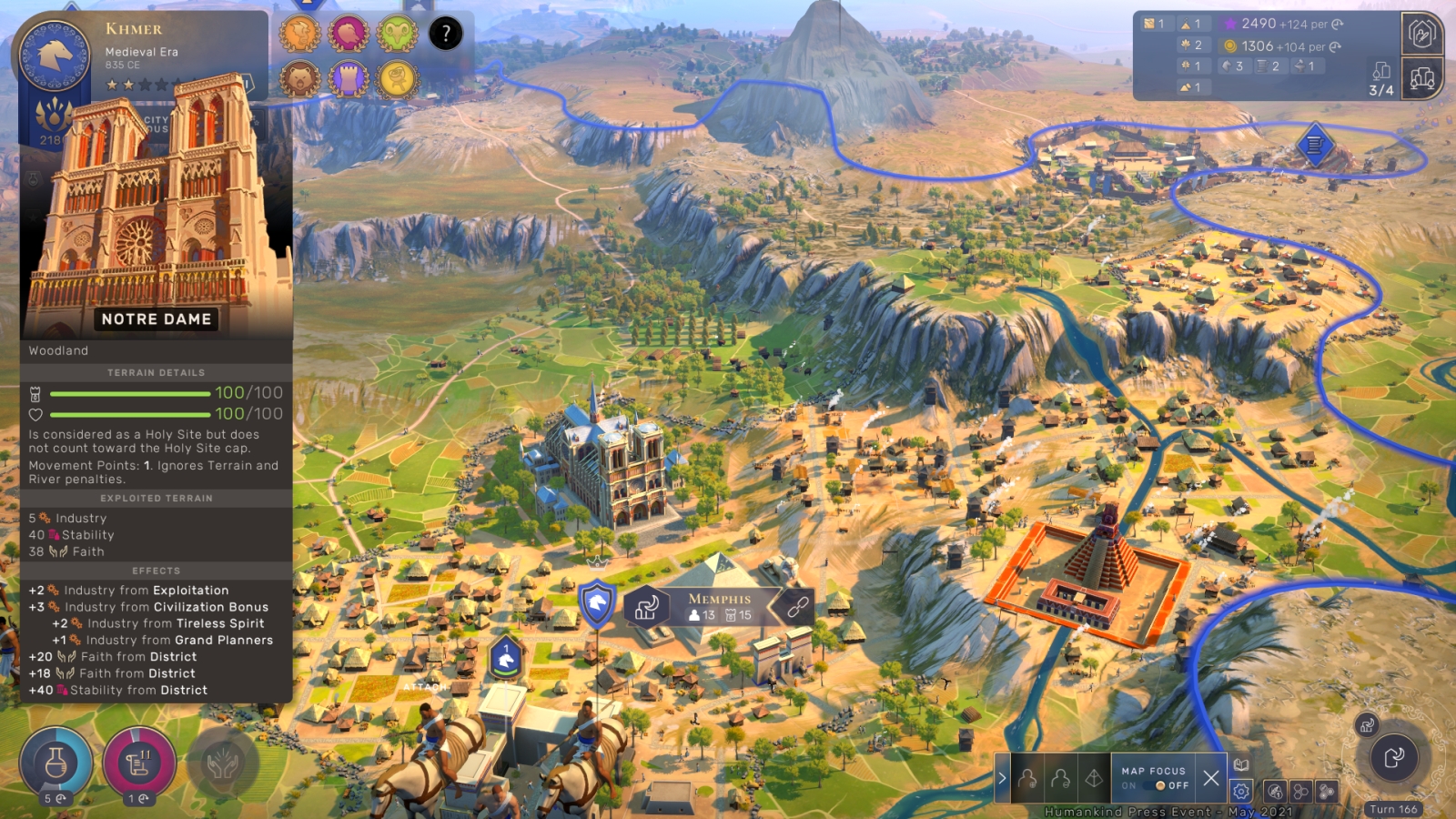 The magnificent Notre Dame, one of many Cultural Wonders you can build in Humankind.

The Diplomacy feature was the biggest thing that stuck out to me in this event, as you actually get to negotiate with other leaders with what will eventually be your own customized avatar. The in-depth menu shows you all the information about the country you are negotiating with, including how they currently feel towards you, what they would ask of you, and what you’ll get in return. The avatars talk, move and debate with each other, and I thoroughly enjoyed it. I assume once all the working pieces of Humankind come together, this will be a really interesting and unique part of the experience. 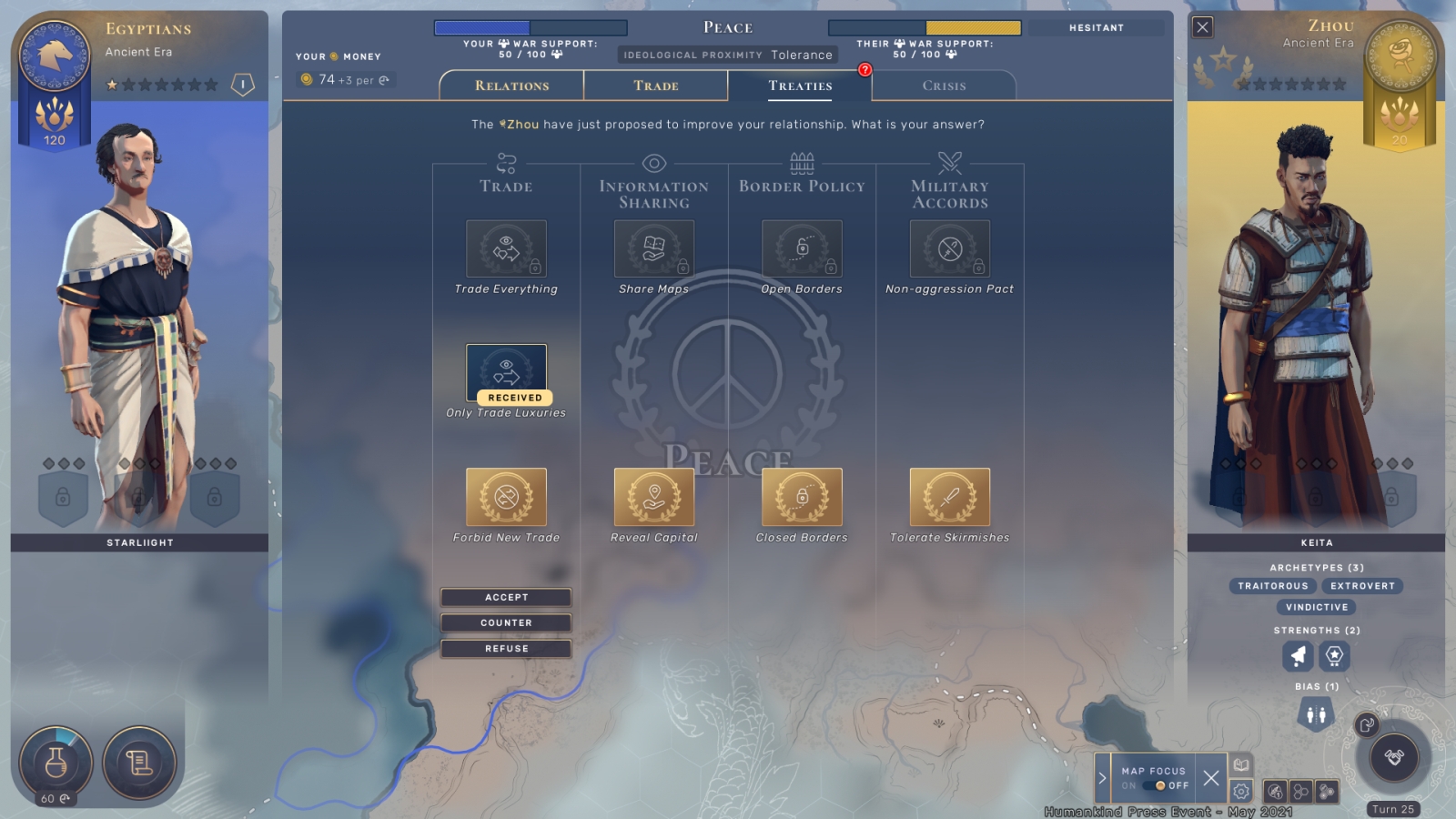 A look at the Diplomacy panel. The avatars negotiate and interact with one another.

Something else that was new to me was the Civics panel and point system. It’s kind of a skill tree or guide to how you will govern over time. These policies stick with you over the course of your leadership, and seem to give you two paths to choose from: to force your will on people, or to let them have some more flexibility. It’s a big part of the customization in Humankind, and can result in endless possibilities for replay value. 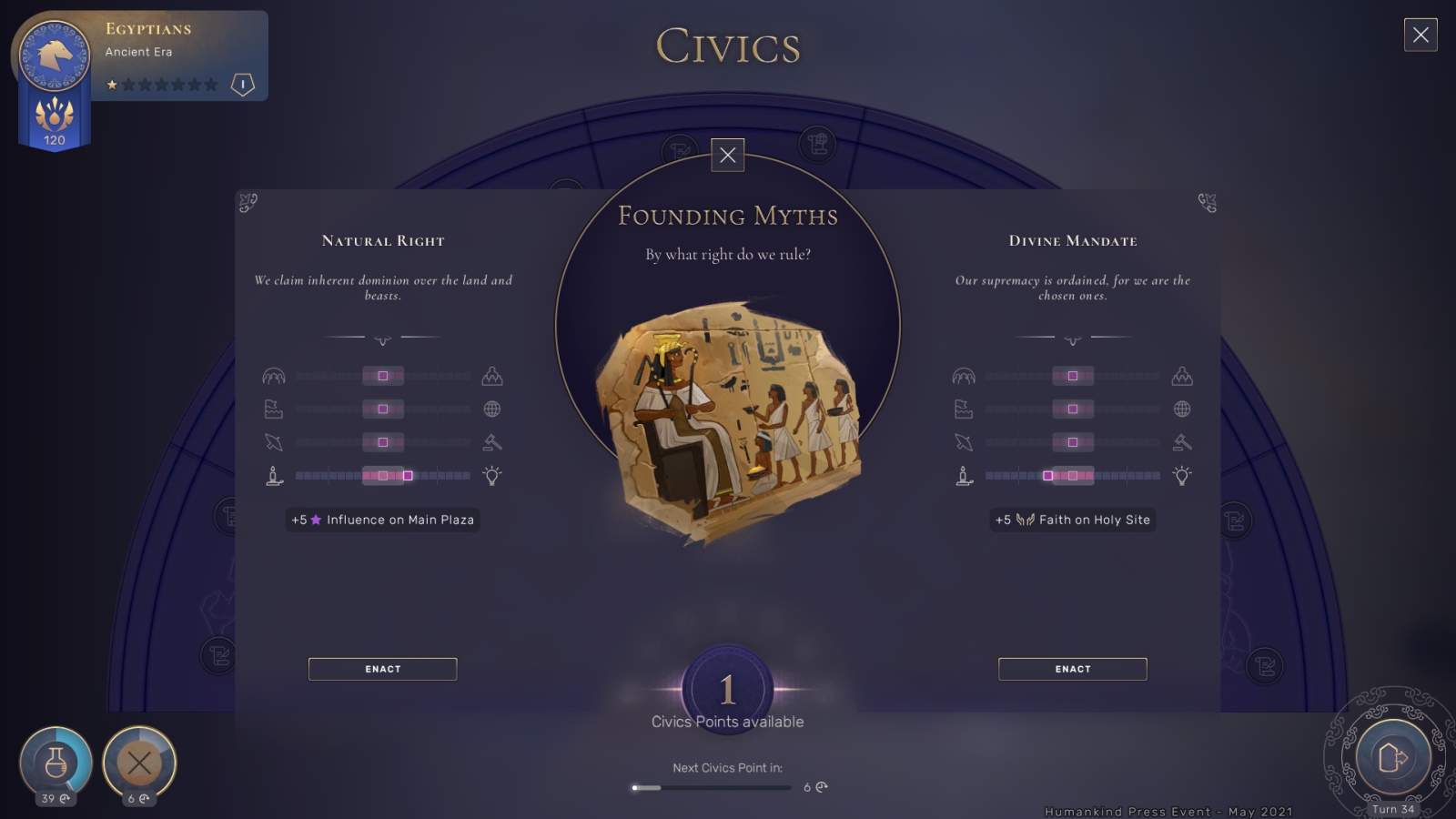 One of the Civics options.

I also had little events pop up throughout my gaming session where I had to make a choice that could come back to haunt me if I chose wrong, which added in another layer of customization. All of these things combined truly make you feel the pressure and ultimate responsibility of what it must be like leading a country or group of people.

There are certain milestones you need to hit to advance into the next era, which let you choose a new culture to adapt into your game, but I really just enjoyed taking my time exploring the map and uncovering new things. I had a pretty large chunk of the map converted or conquered, and I ended up with a Fame score of 2502 at the end of it all. This is probably pretty sad compared to some of the other fellow participants, but I sure did have a great time. 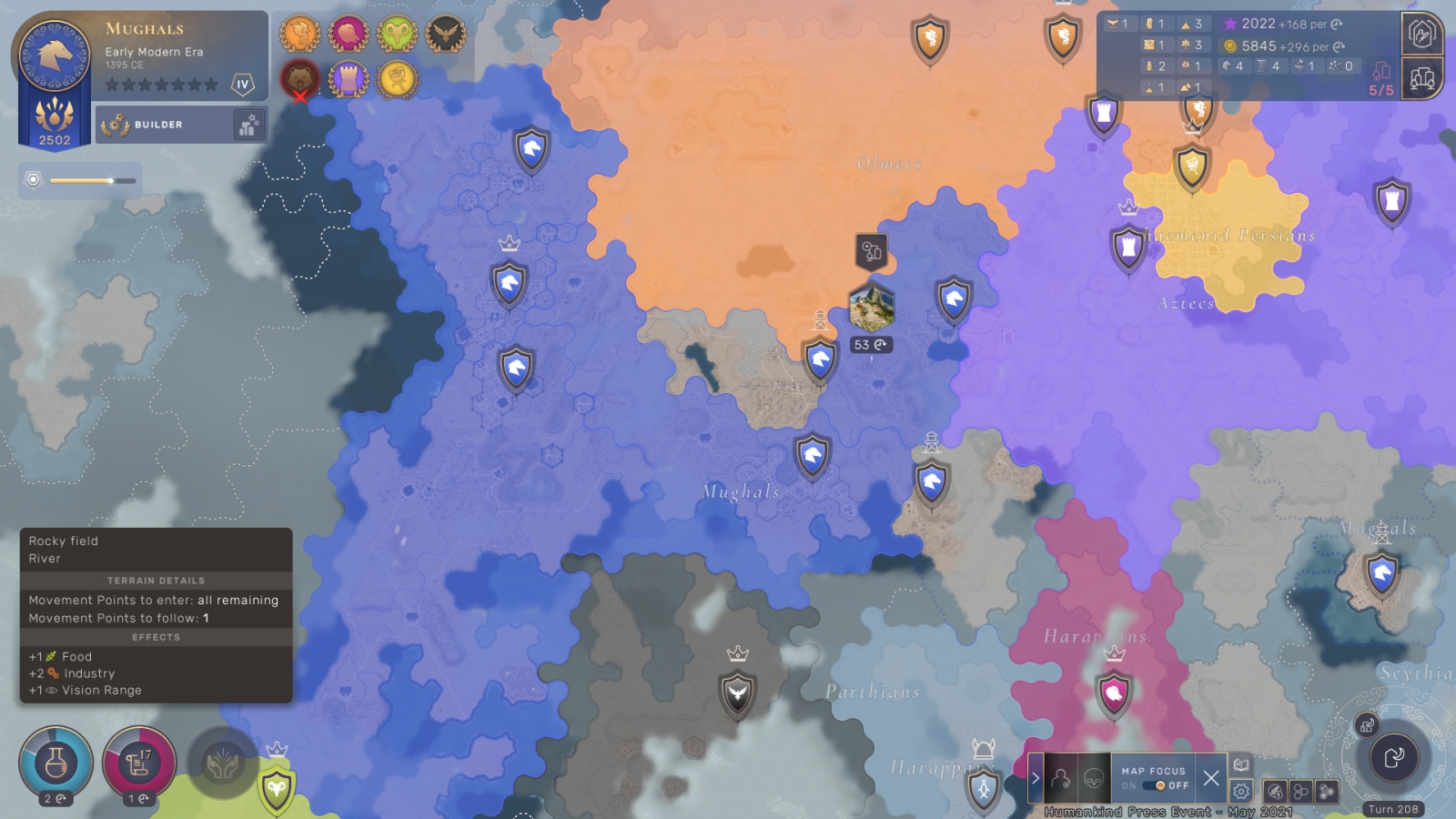 I ended up with 2502 Fame, and took a nice little slice of the map for myself. My sections are blue.

Humankind has been on my radar for some time now, and I was quite honored to be one of the few members of the press allowed to participate in this event. I came out of it eager to play more, sad to see my 24 hours with the build end, but more than ready for that August 17th release date!

Humankind will be releasing on August 17th, for more information you can check out their website! If you’re a fan of 4X games, you’ll definitely want to keep your eyes on this one. While it may be very similar to other games you’ve played, it has plenty of features to set it apart.