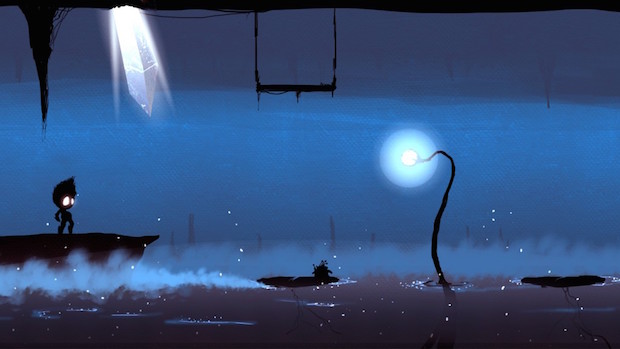 “We wanted to show that things which are dark, can also be good…” is what Bishop Games said was one of the main stories behind Light Fall, their new 2D platformer. Many games and other forms of media have always portrayed the idea of dark characters or scenery to be bad, or the villain. While on the other hand, light/pretty objects have been considered good. But as you may have guessed, that is not the case in Light Fall. Bishop Games takes that trope and throws it out of the window from the beginning.

They do this by quickly introducing you to your protagonist, a boy cast only of shadow and small, beady white eyes.  This child has no recollection of why he is there, or even who he is. Once you take a few steps and get the grasp of things, you are introduced to an owl that will proceed to guide you on your exploration. Along this guide you will run into some interesting characters that add life to the story being told. There are also some outlines of Greek God-like characters that appear in the background. The owl proceeds to give you some details on them, but never explains why they are not currently present, adding to the intrigue.

According to Ben Archer of Bishop Games, the narrative of Light Fall will play a large part in your experience. That was shown off early in the game as even the owl is taken off guard by some of the images he sees. For example, you stroll upon a city that is much less empty than the owl remembers; leading you to believe that not even your partner knows the real answer as to what is going on here. When I tried to probe the folks at Bishop Games for more information about the story, they were very tight lipped, which can only be a good thing. What does seem to be clear is that Light Fall will not be upfront with its storytelling. It will make you think and analyze every bit of text you read and imagery you see.

The aesthetics of Light Fall, although very simplistic, catch your eye immediately. The darker look, apart from simply breaking a storytelling cliché, really makes the light objects pop every time they appear. It does even more so for colored things such as the pink bird that flies at you once you approach it. By far the most beautiful part of the environment are the pink crystals which, of course, will result in your death. There are also slight pink hazes that appear in the foreground, these add a layer of atmosphere to the experience as well as a dab of more color to please the eye. Other levels will have increasingly colorful art, despite the one being shown at PAX featuring a mostly dark art style.

Keeping with the 2D style, Light Fall pushes forth a strong emphasis on platforming, and doing so with a great amount of speed in some situations. The game features a quick respawn time, something key in games that require this kind of precision. Your main ally during these platforming situations will be a cube, which you can spawn under you as you try to jump, giving you another platform to jump off. The cube is utilized in some truly unique situations that build upon jump combinations like a wall jump into leaping off the cube, etc.

One big worry is that this might make the movement feel a bit cluttered. After all, movement is supposed to be a simple task. Thankfully, that is far from the truth as the movement in Light Fall is incredibly smooth, with precision being something you can achieve as long as you really think about your upcoming movements. Spawning the cube and controlling where you place it is also an option, and will help you deflect dangerous obstacles in your way. With how solid the first thirty to forty minutes of Light Fall’s gameplay was, there is no telling how difficult and brilliant the action gets later on.

The 2D platformer has started to feel like an incredibly tired concept over the past few years. Due to that, I was highly skeptical on Light Fall until I finally got my hands on the product. The movement is tight and features the sort of accuracy you really need to make a game of this style work well. That coupled with an intriguing story and gorgeous art makes Light Fall feel like something that should be on everyone’s radar. While finding a gem on the PAX East floor can be a bit difficult, Light Fall shines bright as one of the best products at the show.