Do you like vacations? Travelling to distant lands, taking photographs of famous landmarks, collecting cheaply-made snow globes from every tourist-trap gift shop? Do you like all of those things but not actually leaving your house? Then you might just like Trekking the World, the upcoming title from Charlie Bink and Underdog Games, who a few years ago brought us Trekking the National Parks. Now, you’re probably wondering, “is this a sequel? Is it the same game but a different theme?” Well, according to Underdog this is more of an evolution of Trekking the National Parks than either of those things, and after getting some table time with this prototype they were kind enough to send us, I’m inclined to agree.

Trekking the World is a lightweight game in the vein of Ticket to Ride, but where that game is much more focused on the journey, this one is all about the destination. Designed for 2-5 players with an estimated play time somewhere in the half-hour to hour range, Trekking the World has players visiting famous world landmarks, collecting souvenirs and taking tours along the way. The player with the most victory points at the end of the game is the winner. 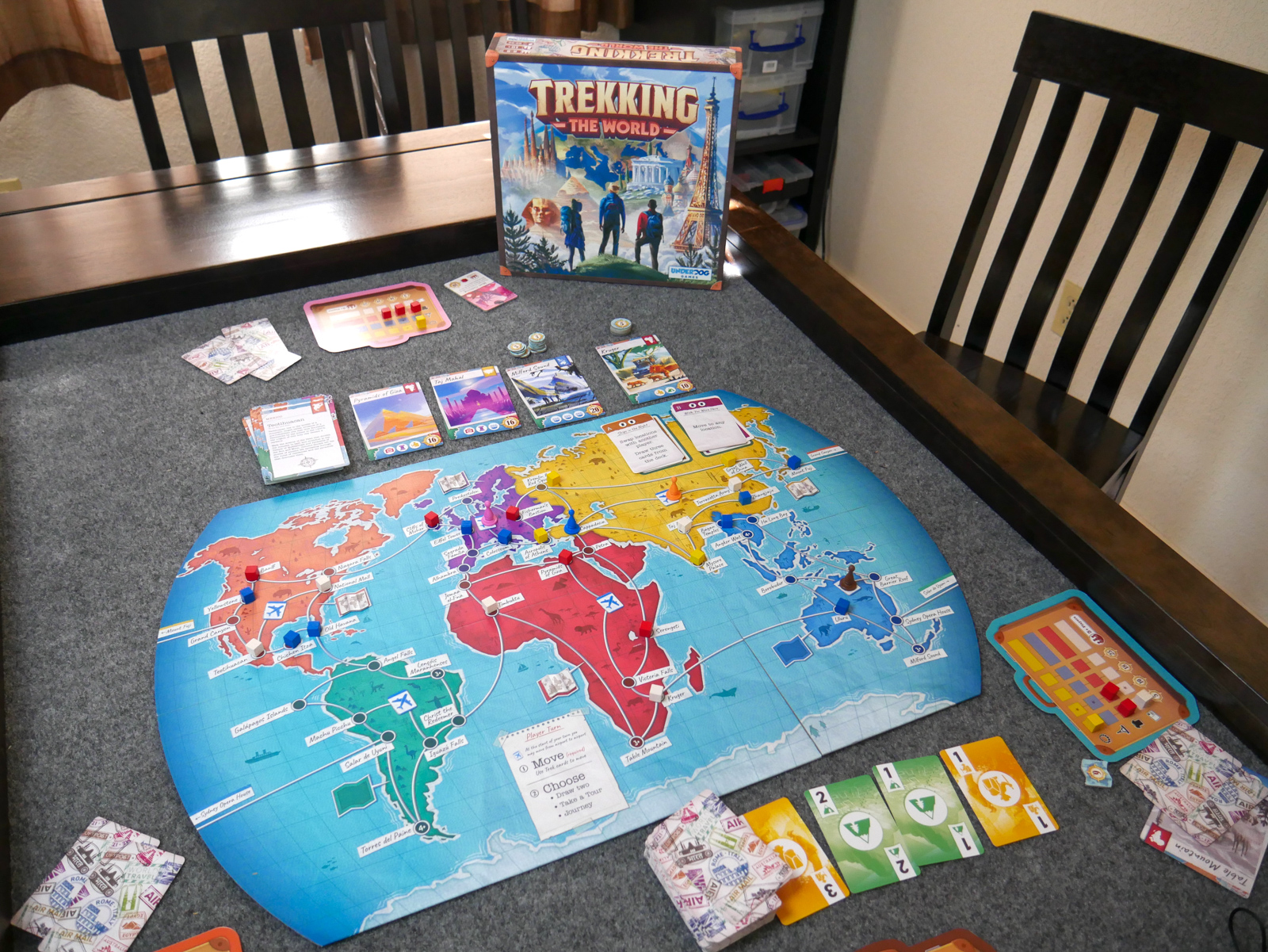 Movement around the board is handled by these Trek cards. On their turn, a player must discard at least one of their cards and move the exact number on the card(s). Any number of cards can be discarded, but the player must play at least one and they must move the exact number of connection spaces equal to the sum of all cards used. These cards are the most important resource of the game, as you will use them not only to move, but also to pay for tours at specific destinations during the game.

Movement is conducted along these connection spaces, which cannot be used more than once during any single move action. Also, movement cannot occur through or on a space already occupied by another player- this effectively blocks the route entirely. If a player ends their movement phase at one of the six airport locations, they can fly to any other unoccupied airport location as a bonus action at the beginning of their next turn.

If there is a souvenir cube at the destination, the player collects the cube and places it on their suitcase, placing it on the leftmost space on the appropriately colored track. If all single spaces on the track are filled, any additional cubes go in the long slot on the right. The first player to collect a second cube in any track claims the “most tile” for that track, placing it in front of them, and they keep it until another player places more of the same color on theirs. “Most” tiles don’t afford anything other than bragging rights until the end of the game, at which time they victory point value on the tile is added to the player’s total. Finally, once the last souvenir cube is collected on one of the map’s six regions, the player claims that region’s randomly selected region bonus token, which is kept in front of the player with any other victory point tokens they have collected. Once a fifth region bonus token has been claimed, the player who claimed it finishes their turn and the game ends. This is one of two triggers that ends the game. 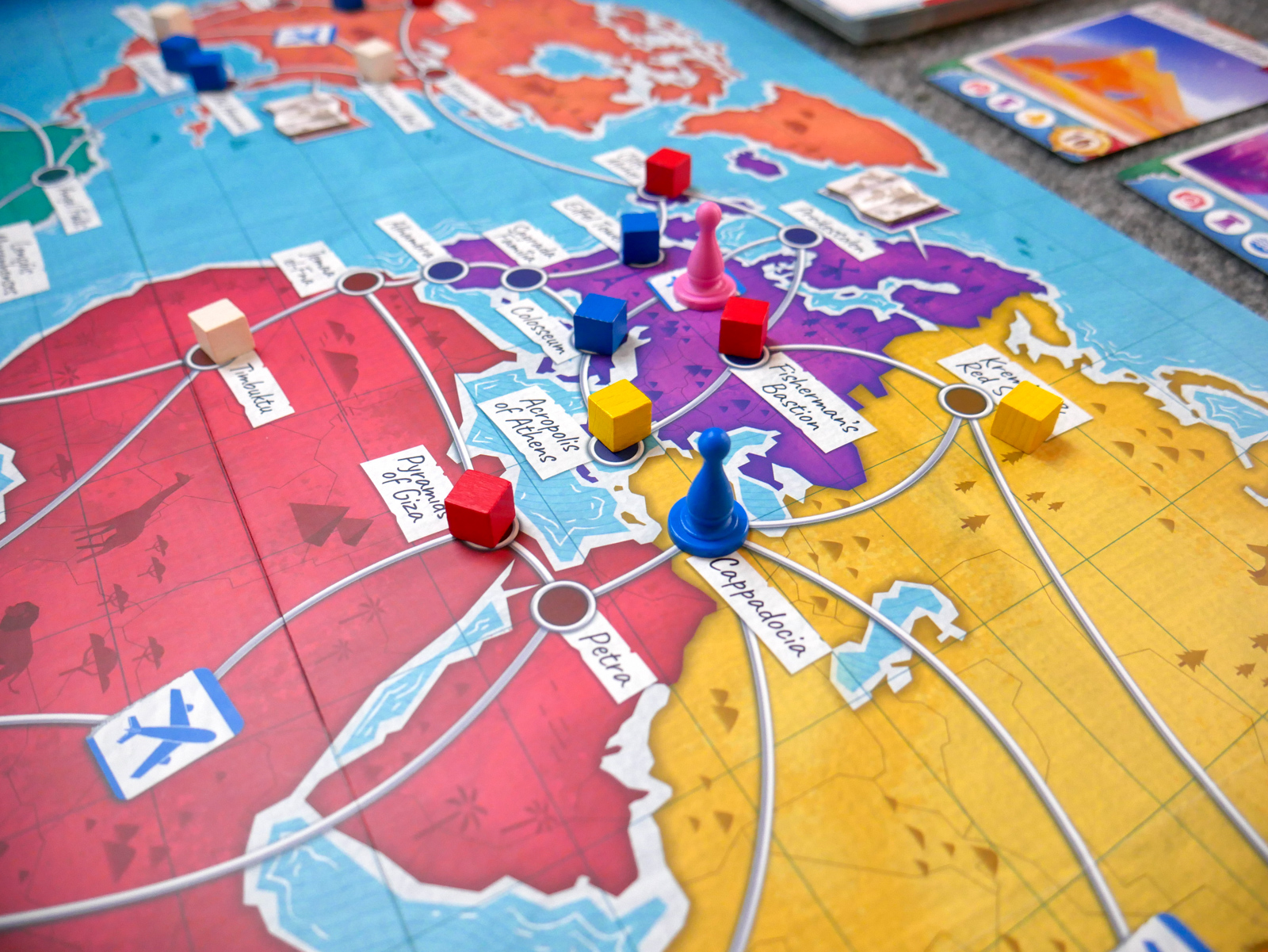 Once the movement phase is complete, the player then has a choice between three actions: draw two cards (either directly from the deck or from the stockpile of four face-up cards, in any combination), take a tour of one of the four face-up destination cards, or journey, performing one of the two actions indicated on the Journey cards here. Drawing cards seems fairly self-explanatory, so let’s talk about touring destinations.

The third player action choice is journey, and this is represented by the two cards up in the top right corner of the board, Journey A and Journey B. To activate a journey card, the player must pay two Trek cards with matching icons. Actions are performed from top to bottom, though they may be skipped, and often provide the player with more flexible options for movement and touring destinations. 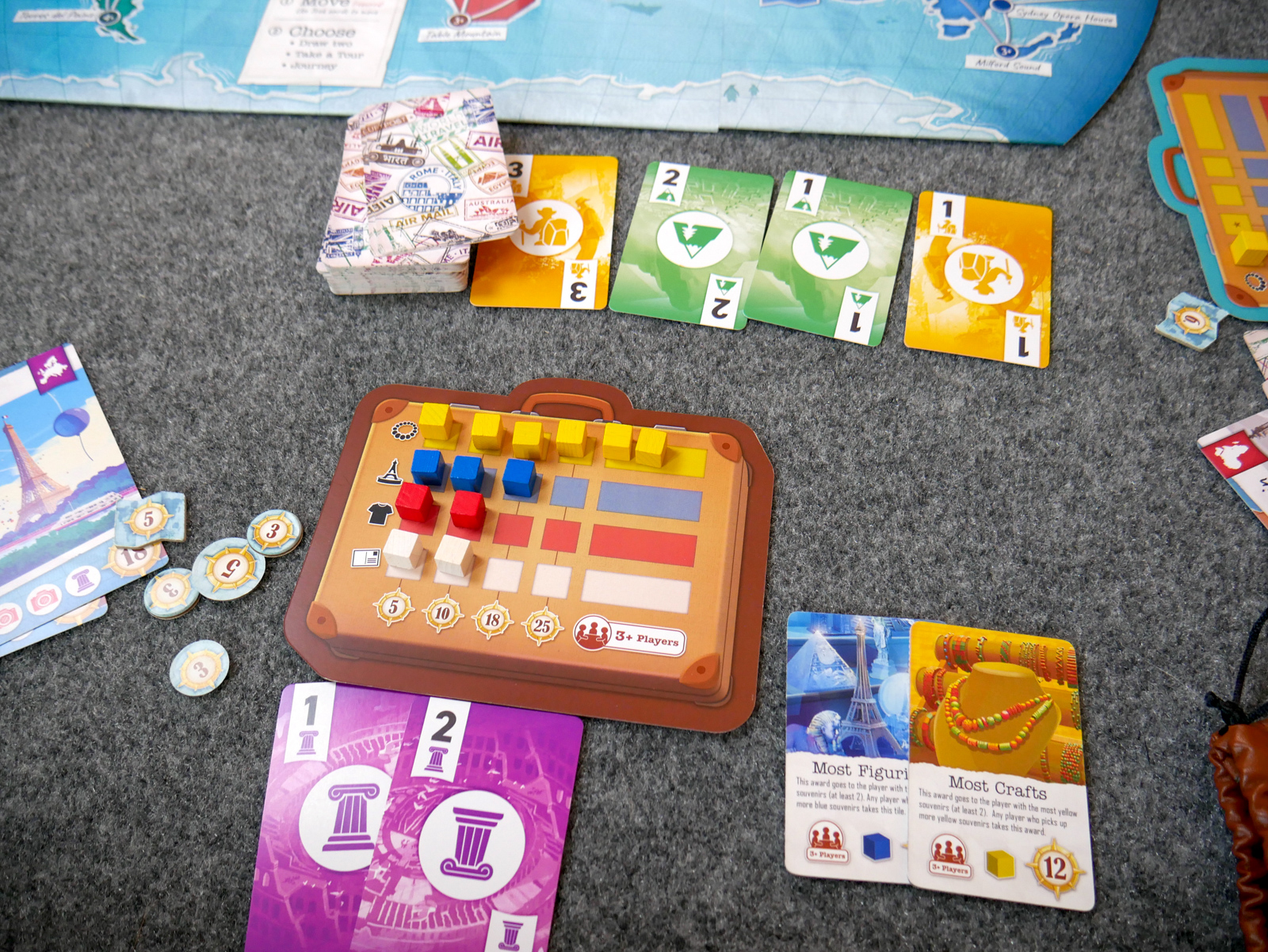 Once one of the two game ending criteria is triggered, players determine their final scores. This is when the player suitcase comes into play, with each of the first four columns representing sets, and each subsequent set represents a victory point bonus. Add those points to points awarded from Most tiles, destination cards, region tokens and victory point tokens. The player with the highest total wins.

So, there’s a few things about this game I really like, as well as a few things that bother me. Mind you, this is an unfinished game, and while this prototype has a considerable amount of polish, there’s plenty of time between the Kickstarter and public release to do further balancing and tweaking.
Like Trekking the National Parks before it, theme is a huge part of this game, and the way it leans into the concept of traveling and touring the world often takes an almost educational tone, as Destination cards provide a brief description about the real-world landmarks they depict.

Journeys, however, seem like they may need a little balance work yet, as some random card combinations can have drastic and detrimental effects on how the game is played. The Ships in the Night card, for example, resulted in a constant loop of players swapping places over and over in the vicinity of the last souvenir cube in a region, the claiming of which would trigger the end of the game. If it didn’t award the journeying player 3 cards every time, the likelihood of swapping locations ad infinitum may have never presented itself. 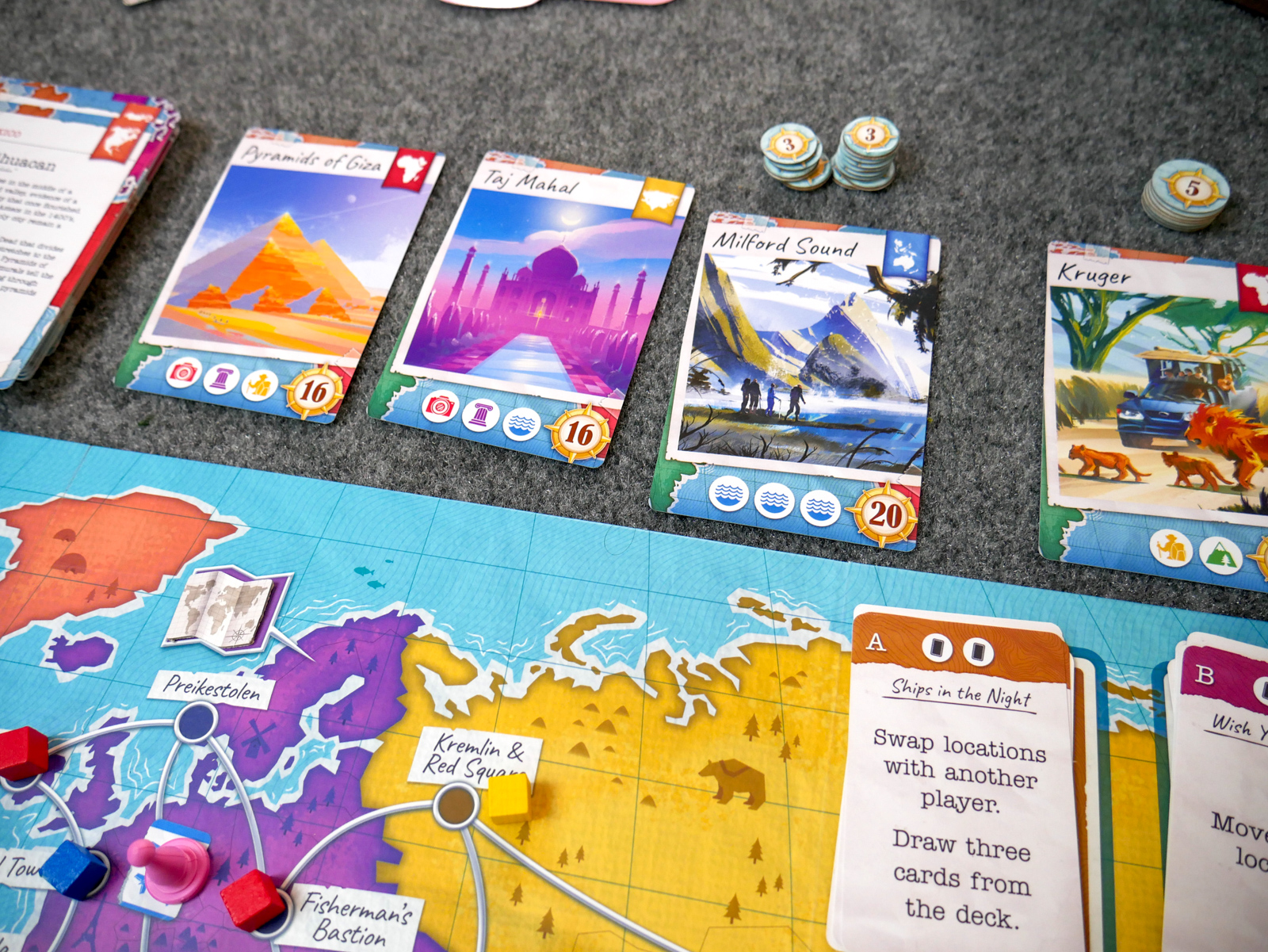 Ultimately, I would consider this to be a solid gateway game- it’s easy to teach, quick to play, and enough light strategy to engage novice and more experienced gamers alike. While my personal taste tends to trend more in the direction of more strategy and complexity, I do really like games that provide a more concise experience, and Trekking the World has a charm that makes it a solid entry on anyone’s game shelf.

Trekking the World is live on Kickstarter now:

Special thanks goes out to Gamer’s Haven in Colorado Springs, CO for hosting our Gaming Trend Tabletop Night every Monday.