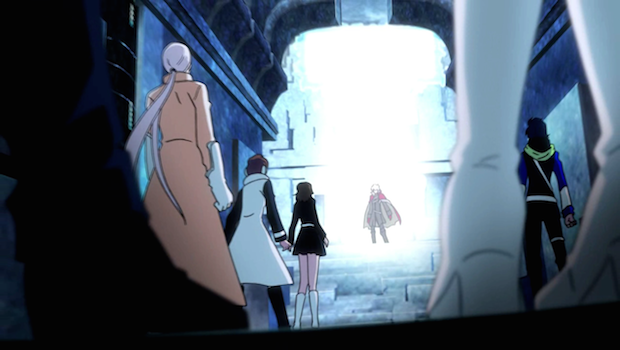 Desperate times call for desperate measures, and even in war, great enemies can create strange bedfellows. This is the motivation that drives Lost Dimension, Atlus’ new RPG about spec ops soldiers who use their powers, called “gifts,” to overcome the world’s adversaries.

Your objective, as their leader Sho, is to climb a mysterious tower and prevent a megalomaniac dubbed The End from destroying the world; yet among your group, traitors lurk in the shadows, waiting for their chance to strike and stop you from reaching the top.

Lost Dimension is a swan song for the PS3, though it comes to both the aging Sony console and the Vita. The game takes its cues from several genres, creating an effective mix of combat and intrigue wrapped up in the bleak, dystopian setting of the Tower.

To climb the tower, you have to overcome missions in each stratum. Most of the time, that simply means wiping out all the enemies on a given map, but the execution is much more difficult than it seems.

Combat plays out similar to titles like XCOM Enemy Unknown or Valkyria Chronicles: each S.E.A.L.E.D. team member (that abbreviation is never explained) acts in turn, then the enemy takes their turn, etc. Rather than grids or tiles, you’re free to move within a certain area, and can do extra damage by hitting enemies in the back and attacking enemies near teammates, allowing those allies to perform assist attacks.

Each of the six combatants you take into battle can defer to one another as well, giving an extra action to a unit that has already acted that turn at the cost of their sanity. Yes, alongside health and gift points, which meters use of each character’s gifts, you also have a sanity meter. Taking damage, using taxing gift powers and deferring turns lowers your sanity; once it hits zero, that character goes berserk, gaining immense power and losing the ability to differentiate friend from foe.

Movement and target is largely free-flow, and positioning is key in every battle.

Missions are tense and require a lot of planning. Though most early-on missions can be tackled by blobbing up as a six-man deathball and rolling through the map, enemies will start using AoE skills and focus-firing your weaker combatants, forcing you to adapt on the fly.

Gifts also create interesting counterplay in combat, and open a variety of responses for those able to adapt on the fly. I got a lot of use out of Zenji’s gift, Link – Zenji can establish a Link with one other S.E.A.L.E.D. member in combat, sharing any benefits or buffs he receives and doing extra damage when assisting and countering with that member. Nagi and Agito provide for quick-response damage dealers, able to traverse the map quickly with their flight and teleportation gifts, respectively.

Enemies start out weak, but soon grow to use a wide variety of skills and assists to take you down.

After conquering a floor’s missions, you come to a Judgement room, where you must erase (re: kill) a team member to continue on to the next floor of the Tower. The plot reason for this is a bit flimsy (The End says you have to, so you have to), but in practice it’s very much akin to playing Mafia – your team votes on who they want to erase, ideally attempting to erase a traitor. Traitors can change over time as well – some may not remember they are a traitor until a later floor, meaning you must always be wary of new threats.

Fortunately, you have a tool that’s quite useful for identifying traitors: Sho’s gift is clairvoyance, and while allowing him to fire shots that cannot miss and counter enemies before they even attack is useful, you’ll also benefit from his ability to hear his teammate’s thoughts during battle.

Judgement can be tense if you haven’t influenced your team to vote towards those you suspect.

After completing a mission, Sho will enter a meditative state and hear five voices – the voices of his comrades. While he can’t identify which voice belongs to which member, you can still keep track of how many traitorous voices he hears, letting you keep track of how changes in your lineup affect the number of voices you hear and eventually narrow the search down to the traitors.

Noting how the number of insidious voices fluctuates between different rosters is key in identifying the traitor.

There’s a ton of systems and interplay going on here. Each S.E.A.L.E.D. member has different gifts and abilities that rely on certain stats to influence them, each ability creates new methods of interplay and synergy, and erased members drop materia, which can be equipped to living members to open up abilities that mix the deceased’s gifts with their own.

Lost Dimension is initially complex, but the harmony created between all the systems is where it shines. While there’s a lot of different mechanics and numbers to take in, all that results in creating an engaging SRPG that feels rewarding to slowly master. You’ll have moments of triumph, colored by the times when you’re beaten down repeatedly by a boss until you overcome it and move on to the next mission, defeating five of the same mob easily on the next floor.

Your base hub between missions, where you can create new equipment or just chat with your squad.

I’ve beaten the game once at this point, and intend to do so a few more times, as each playthrough creates different situations. The traitors are randomized in each playthrough, so those who you erased in your first game might be your most loyal allies in NG+ and beyond.

I am, however, limited to talking about just the first couple of floors at the moment, which is a shame – Lost Dimension’s story is a slow burn, one that doesn’t really pick up until the latter parts of the narrative. By the end of the second floor I had only encountered a single character quest, loyalty missions that strengthen Sho’s bond with his teammates, and most characters hadn’t had their backstories fleshed-out very much. There’s great nuggets of storytelling, but you’ll have to dig a bit into the game to find them.

Visual-novel-style segments punctuate story missions, fleshing out the characters and their growing paranoia.

My time so far with Lost Dimension has been fantastic. The combat is fluid enough to create interesting situations, and each character feels unique and engaging – each can hold their own to some extent, but also serve very specific roles within the overall complexion of the team. With randomized traitors, fascinating characters and a variety of skills and builds for each S.E.A.L.E.D. member, it’ll be sure to hold my attention for a long time. Lost Dimension is a wonderful addition to the Vita’s library and a perfect swan song for the PS3. You can look forward to more about this title in our full review coming later this month.