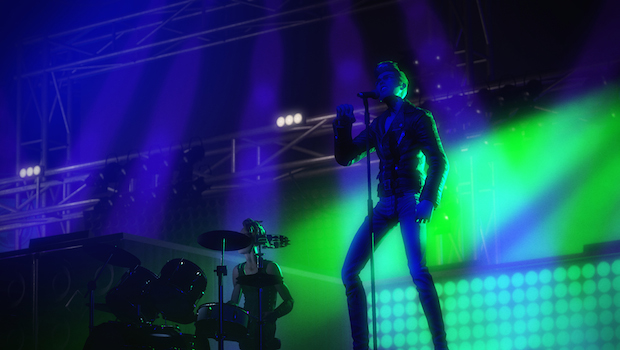 The key to Rock Band 4’s brilliance is the way it builds up, rather than changes. Many rhythm games attempt to change the design or alter the tools, in order to chase that same feeling the player gets the first time they pick up the guitar. Rock Band, however, has not changed the way in which you input; rather, it’s expanded the output, allowing for emergent rhythm gaming that is unlike anything I’ve ever seen.

Vocals have received their harmonies and drums get their fills, but in the segments I played guitarists stole the show. The new freestyle guitar solos replace the guitar solos of old and allow for a freeform performance that is totally your own.

Solos often overlap with other sections, letting bandmates still contribute to the fun.

As the solo flies down the highway towards you, it notates blue or orange for low and high respectively. Bars notate the speed you should strum, and while downstrums play normal notes, upstrums let you bend into the note fluidly. Tapping is marked by a dashed-line layout, sustains and feedback notes have long solid bars, and free-form sections are dotted star fields open to interpretation.

Of course, you could ignore all that and jam out however you want. Solos are open to interpretation and following them simply benefits your score, though the game will dump you back into the song when the solo is over. It’s a little awkward to drop back into a riff when you’re mid-rockstar-frenzy, but it’s similar to the band finally saying “enough” and cutting the guitar’s feed off. The price of narcissism, right?

Freestyle sections have structure, but still allow for player expression.

What I enjoyed most about my time with the freestyle solos was how natural they felt so natural and off-the-cuff on Rock Band’s guitar. The high frets were previously a luxury, a feature I used if I took notice of it and decided to use it. Now, the high frets are a fluid part of the experience, and moving between the low and high frets during a solo is key to a high score and good performance.

The hardware of Rock Band 4 is also significantly bolstered, thanks to a partnership with MadCatz. Madcatz has taken the standard instruments and preserved the form while rehauling the features. Fret buttons feel solid and have a good give to them, and the strum bar has finally hit that sweet spot between a mushy-molasses strum and incessant clicking. The experience with the guitar will feel right at home with Rock Band faithful, but it genuinely feels like a premium instrument compared to previous kit offerings.

The new instruments feel great, with no mushy strum bar or plastic bits.

Drum pads are better reinforced and have more bounce to them, making the snare rolls and “wipeout” tom runs smoother and more realistic. The kick pedal has also been reinforced, with a hinge that has a nice, solid support.

For vocalists, the microphone might be the biggest upgrade of the bunch. No more mic clipping or hollow, tinny sound – even the showerhead sopranos will shine on the new hardware, able to accommodate for most ranges, distances, and settings.

The song selection is fantastic, spanning genres and decades.

The setlist is also fantastic, if not by virtue of its past library but also on its new additions. Lazaretto adds some funk and irregular beats, a blast for drummers and guitarists. Fleetwood Mac’s Rumors (one of my favorite albums of all time) gets another entry on the setlist with You Make Loving Fun, a fun challenge for vocalists and several opportunities for the guitarist to forego the heavy metal tapping in favor of melodic, emotive soloing. My God is the Sun was probably my favorite addition, which is no surprise; every Queens of the Stone Age song lets the band members shine in unison, and the final rev of the engine at the song’s conclusion makes for a fun party moment.

Rock Band 4 is standing out by simply creating the best four-player rhythm experience around. Every instrument is allowed their opportunity to shine, while not detracting from everyone else’s fun. I haven’t had the chance to delve into any singleplayer content, but after the time I’ve spent with it on the showfloor, all I can think about is getting a kickin’ setup in my living room and getting the band back together. Just no Free Bird, though.