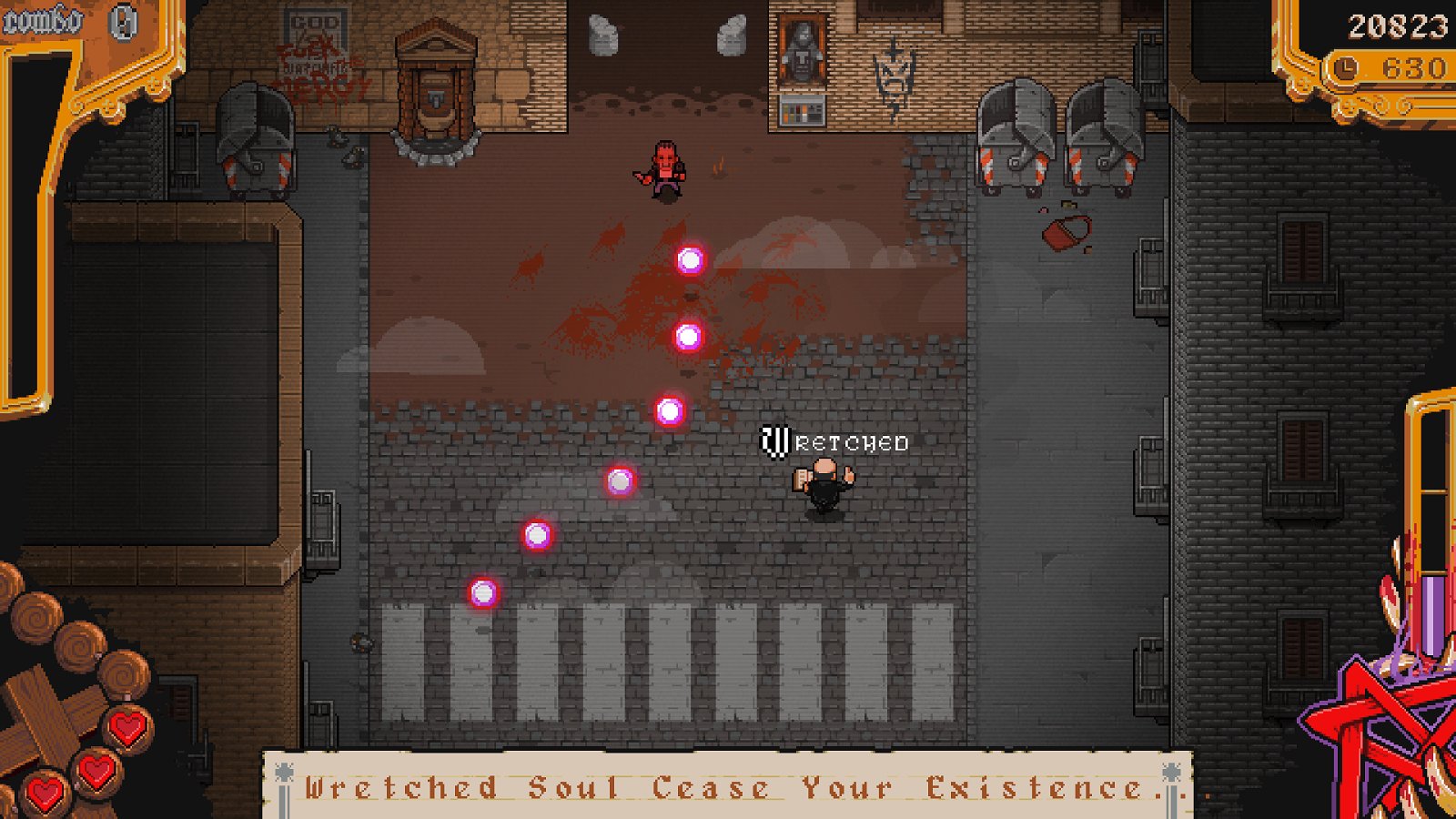 I’ve always been fascinated by Typing of the Dead; I’m not sure how the developers did it, but they made a somewhat educational experience out of a survival-horror light gun shooter. While typing games are nothing new, Morbidware and Headup Games have upped the ante and are developing a shoot-em-up/typing hybrid in the form of The Textorcist. I got to run through the first three stages of the game and walked away impressed at the results.

The Textorcist is literally just that, as you text your way to exorcise a variety of demons as the main protagonist Ray Bibbia. A private exorcist who has parted with the church, he is still in the business of doing God’s work by eradicating demonic forces through the power of divinely inspired words. During each stage, you have to fight a boss by typing out sentences in order to defeat it. While that’s a bit easy in and of itself, there’s that other thing you have to worry about.

Throughout each stage, you’ll have to also dodge a barrage of bullets and other obstacles that aim to separate you from your holy book. If you take a hit, your book will be thrown across the room and you’ll have to obtain it in order to continue your incantation; get hit in this state, and you’ll take damage. Take enough damage, and you’ll have to start from the beginning of the stage. It sounds simple on paper, but bullet hell games are known for their difficulty. While the first three stages weren’t super hard, the fact that I had to juggle between typing and dodging made for a pretty challenging time. Bullet hell games also encourage the use of grazing (nearly missing your opponent to grab extra points), and The Textorcist does this by requiring you to have to be in a near proximity to the enemy in order to be able to type. I really liked this approach to grazing bullets, as it meant that I couldn’t be comfortable just shooting words wherever I pleased. You’ll need to memorize different patterns for bullet spray in order to move around, and it was fun trying to endure the next wave of different things to avoid. In the third stage specifically, there were times when the boss would dip out of the stage and place different bombs that Ray had to diffuse by typing words.

The typing itself is entertaining, as you’ll have to type out different prayers and sentences to win. Thematically, this works pretty well, and while the demo didn’t have them, there will be instances where you’ll have to type out phrases in Latin. I did notice that the game did lag out when I was typing exceptionally fast, which caused my keystrokes to be misunderstood. It’s here where the game falters, as hitting an incorrect key will cause you to go back one letter as you type (up to the beginning of your current word), which can be frustrating when you think you’ve written a sentence flawlessly only to realize that you tripped up on an earlier word. I would have preferred it if the game would stop on the current letter rather than backtracking, as it feels more logical in its placement. Other than that, the typing and dodging hits a balance that’s tense yet forgiving.

As for the graphics and presentation, they’re a pretty functional mix of pixel art and fast-paced background music. While the premise could be seen as sad and morose, the music ensures that you’ll be up against some pretty hard-rocking enemies in the next few stages. I did have a bit of an issue during my time with the demo where the screen size would be reduced, but the UI remained the same size regardless; however, heading to the hub world (where you can choose where to go), made everything revert to normal. It’s a small qualm I had that is probably exclusive to the demo, but I just wanted to point it out just in case.

Taken from my preview experience. This will be fixed in the final game.

The Textorcist is a surprisingly refreshing take on the typing subgenre of action games (which is a real thing, I promise!), and mixes it with some pretty great bullet hell gameplay that I’m sure will ramp up when the game gets released next year. For those that want to ditch their copy of Mavis Beacon Teaches Typing for something with a little more satirical bite, you should definitely check this out later.