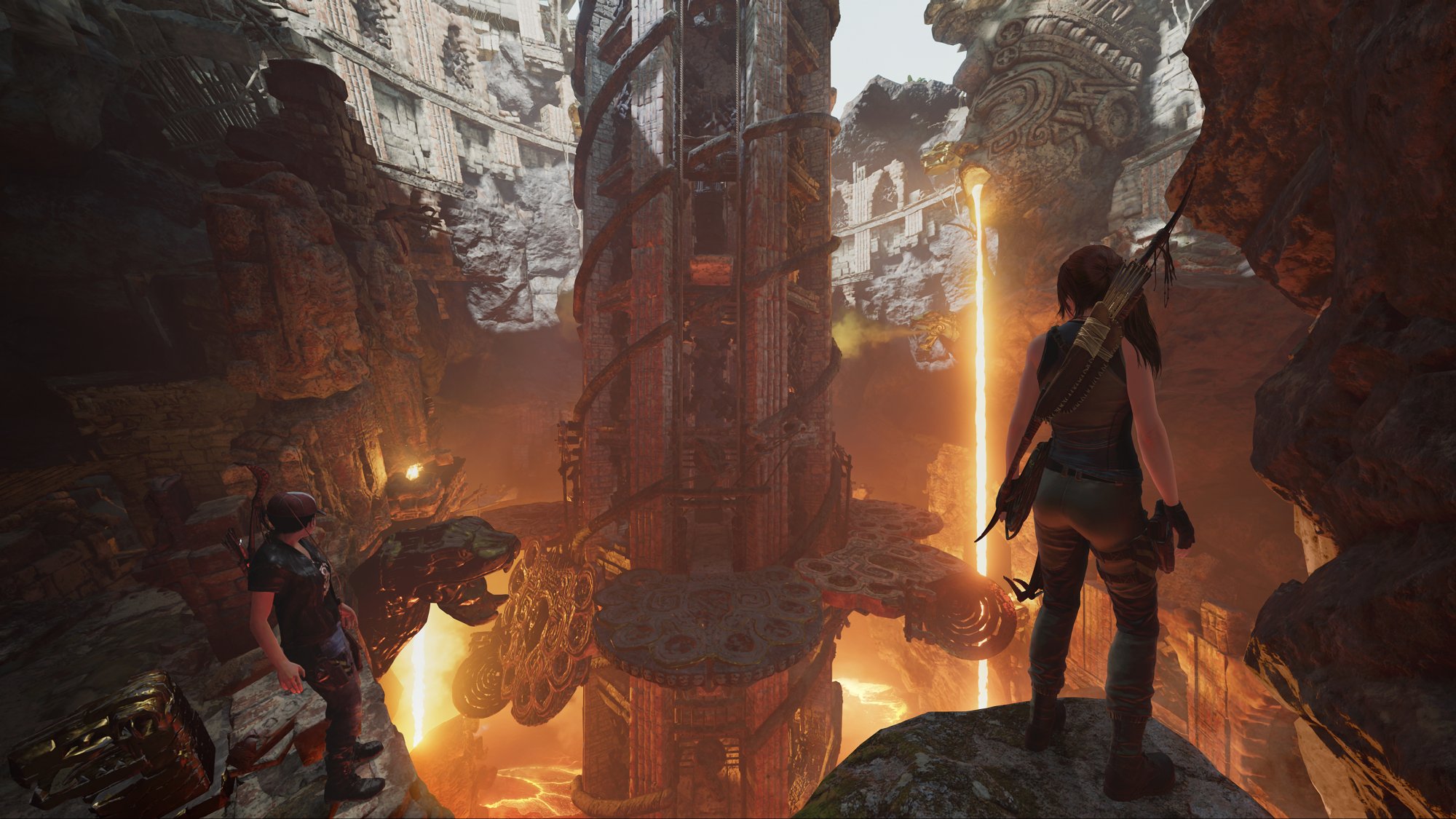 By this point, many players have seen the credits roll on the final installment of Square Enix’s new Tomb Raider series, but the adventure is about to continue. The Forge, the first of seven DLC planned for Shadow of the Tomb Raider t, releases November 13th, bringing new tombs for Lara to explore, new weapons, abilities, and outfits to acquire, co-op play, and an additional story featuring Abby.

We got to go hands-on with the newest challenge tomb, a scorching hot, lava-flooded puzzle involving a spinning platform that you must slowly raise seven levels. This challenge requires you to both think and act quickly, as the platform will sink back down if you don’t keep up your momentum. This puzzle can be tackled solo, but we got to jump into co-op, which allows you to work together to quickly clear the tomb.

You can only play multiplayer online, as there are no split-screen, couch co-op options. Interestingly, in this tomb, you will always play as Lara, while your partner, who also sees themselves playing as Lara, will look like Abby on your screen. This puzzle involves a lot of levers, dropping platforms, and serpent heads which spew flaming gas. It doesn’t take long to figure out the basic mechanics of the tomb, but learning how to conquer the puzzle is only the first step. You’ll need to beat time challenges if you want to unlock new skills, outfits, and weapons which you can then use in the main game, and finding a competent partner is going to be a vital part of beating these timed trials.

While we only got to sample the co-op puzzle, we got some tantalizing insights into other parts that will be included in the DLC. A new side mission complete with a new story which explores Anna’s backstory and heritage will be a large part of this new DLC. Each new DLC installment includes new cinematics, new voice acting, and contains beats from Shadow of the Tomb Raider’s three pillars, combat, puzzles, and stealth.

The DLC fit into the game at different points, and the first five can be explored before you have beaten the game, meaning that new players can encounter these stories organically as they work their way through the game. Five of the seven upcoming DLCs will be co-op, and the final DLC promises to be something special. It will be larger than the earlier installments, provide closure for a major faction of game, and will only be available to those who have purchased the season pass.

Shadow of the Tomb Raider – The Forge comes to Xbox, PlayStation 4, and PC on November 13th, and we can expect a new DLC every three to four weeks after that until April. You can purchase each DLC individually for $4.99, or grab the season pass for $29.99.