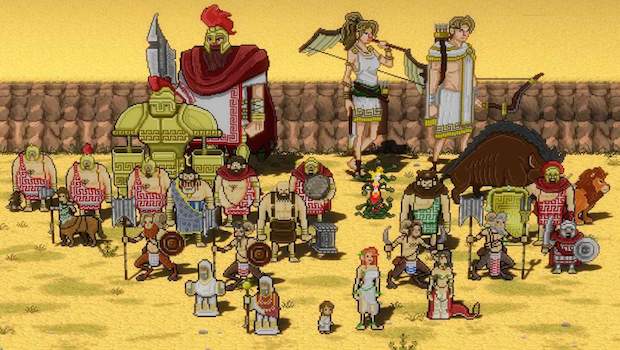 The power of the people is vital in democracy, that the population must be able to determine their own future and course. It’s that vein that Okhlos derives its inspiration from, if perhaps in a more violent manner than you might expect.

In Okhlos, you are a prophet figure, a leader of the people who commands his people to take down the powers that be in a pseudo-Rome. Angry centurions and magic sorcerers control the world, and you have to take them all down to restore power to the people.

Gameplay in Okhlos is a strange mix of Pikmin and Katamari, but it just works really well. You run around the map, picking up followers to join your massive death-ball of mob justice, and then roll into an enemy to make them all fight the bad guys. Most of the people you find are just that: common people. There are, however, philosophers and artists who can join your cause, and they buff your standard peasant’s stats and have a nice health boost to boot.

It isn’t just slamming your mob against the rocks until they fall, however, as many of the enemies in Okhlos can wipe out your small horde in just a few swings. It becomes important to manage aggro, move around, and dodge enemy attacks when possible to keep your small band of ants alive to down the giants.

The style of Okhlos is extremely unique, blending pixel graphics with Greek and Roman themes. It’s fun to see a little retro-pixel version of a famous philosopher go up against a massive Centurion, and the simpler style means it’s easier to make sense of what’s going on around you in each area.

Progress can only be made by clearing out each of the enemies in a map, after which you’re given a quick respite to purchase upgrades and new additions to your mob. There’s few small enemies or weaklings, just massive giants to take down; which can be challenging at times, but more often than not, it gives you a true sense of taking down giants.

Our time with Okhlos was short, and I’d love to see more of the systems at play, but from what we’ve tried already it’s a promising mix of crazy style and pixelated mob justice. Look for Okhlos later this year on Steam for PC.