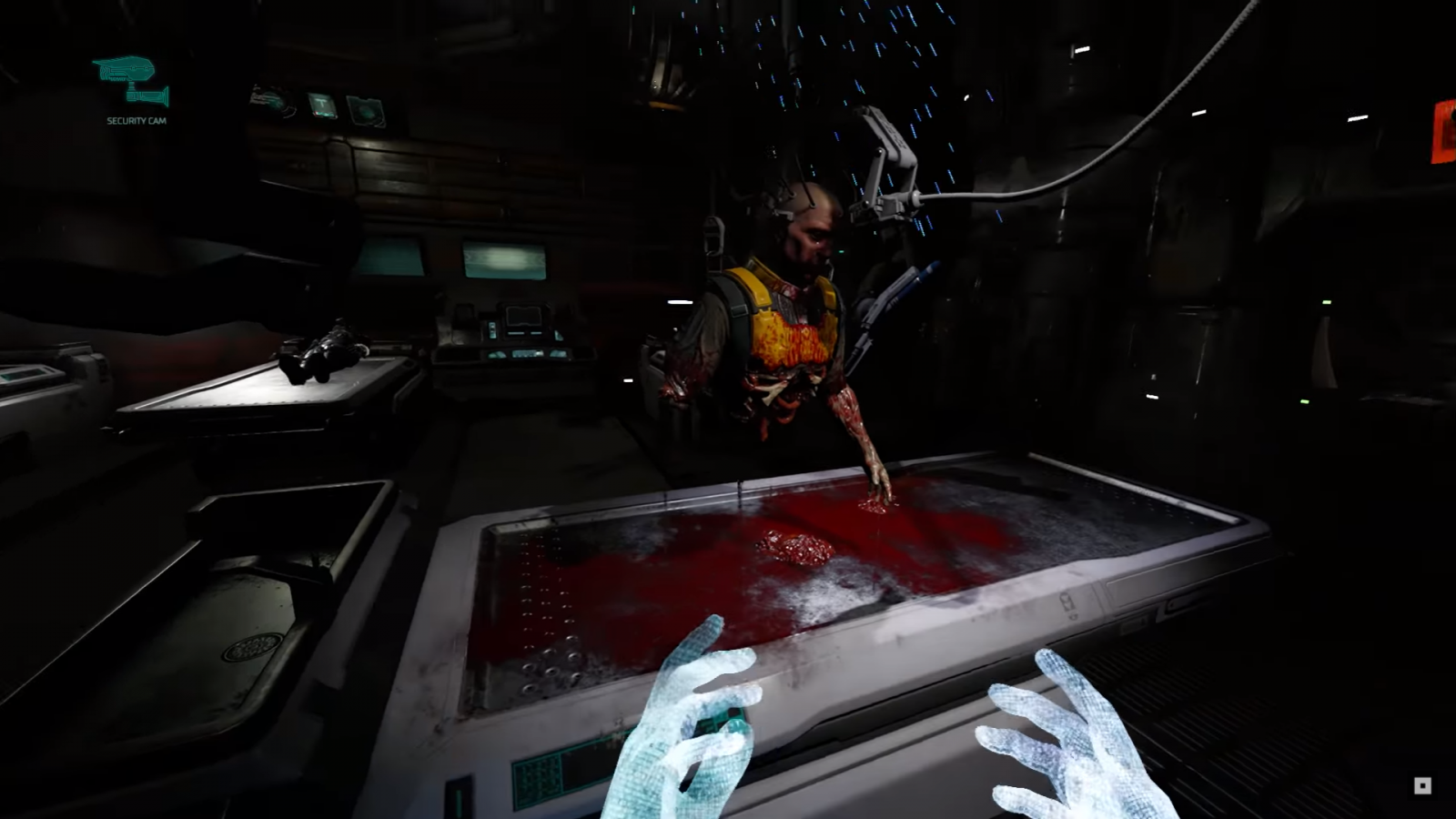 Doctor Peters examines his own remains in the Doom VFR Trailer

Doom VFR is the odd man out in Bethesda’s VR lineup.  While Skyrim and Fallout want to deliver their full breadth to the player, the team over at Id Software want to deliver something closer to a bespoke VR experience.  There’s a new campaign and the doom marine is not the protagonist.  Instead we have Doctor Peters, whose consciousness was uploaded to the UAC’s backup computer.  This allows Peters to transfer his mind between robots, and apparently is going to lend itself to more gameplay experiences that aren’t squarely in the categories of “rip” or “tear.”

Yet rip and tear seems to be the focus of the current demo, and having not had the chance to play it at its previous showings, I was grateful that Bethesda is still trotting out a demo centered around the fundamentals.  The demo starts in a UAC facility without anything to contend with.  The quiet time works to let you get your “VR Legs,” acclimated to the standard point and teleport movement system and finding your orientation. After aimlessly circling the empty halls for a minute or two, I made my way to an open room.  There I was able to grip a powercell with the VR wand and push it into place to bring power to the facilities.

Interactions like this imply some puzzling possibilities for the franchise.

While this is something hardly worth mentioning in the Doom mainline game, it seems to imply some new novel gameplay opportunities which Id Software has hinted at.  Every game needs its quiet time, and after the most basic of puzzles I took a moment to look at the holographic displays I had just powered on.  One such display showed off some of the Doom enemy types, and while looking at it it occurred to me that the new protagonist was knowingly working on projects that summoned them before his death.  Would I be bringing these facilities back online?  Thinking back to the damage I did to them as the doom marine, I wondered at what that might look like.

I didn’t wonder for too long, though.  A table of weapons beckoned me to try out what Doom is known for.  There were three guns on offer:  the pistol, shotgun, and plasma rifle.  Taking a moment to slip back and forth between them, I settled on the shotgun and turned around to head back out into the hallway where imps and possessed marines had started spawning in.  A few shotgun blasts later and the telltale blue and orange flash came over a pair of imps.  “Oh!  Can I do a glory kill?”  I asked.  “Not in this demo, but you can do a telefrag.”  I had missed my chance with this group, though.  I dispatched them and furiously warped around the hall eager to try out a new way to kill the demons.  The telefrag is really gratifying, with the usual teleport effect being accompanied by a cloud of gore centered around you and a satisfying wet splat.

Combat still feels very much like Doom 2016, even with teleportation.

A few minutes, and many blood clouds of gore, later the halls were clear and the first stage ended.  I was spawned into hell and immediately taken by the generous lighting and volumetric smoke and steam effects.  I had the opportunity to play Doom 2016 in 4k on PC and was thoroughly impressed by hell during that experience, but I’d happily take the drop in resolution for the sense of depth and space I saw here.

Unlike in the UAC facility, I didn’t really have time to gawk.  I was immediately presented with a much more diverse enemy set and took to dispatching them.  With the more complete set, I got the “combat chess” experience with the layers of different enemies forcing my to prioritize and think more about how I was moving around the experience.  Coming face to face with a pinky demon felt like a bit like a crisis.  Teleporting is nothing like a circle strafe, so I struggled for a moment against its armored face to try and find good way to get behind it.

This is when the rationale for not porting Doom 2016 really set in for me.  Doom is a very movement oriented shooter, with every enemy attack occurring in melee range or being a dodgeable projectile.  A different movement system meant that all the enemy behaviours would need to be tuned, and the same could be said about the levels.  I continued on, trying to spot the differences.  Unfortunately, it wasn’t long after that I had cleared the environment with only the feeling that it was different but not a fully realized idea of how it was different.

One hellscape faded out, and another faded in.  A baron of hell was barreling towards me and leaping straight into my face.  I raised my gun up to blast it, but the screen cut to black and the Doom VFR logo splashed across my face.  Many words have been written about how Doom 2016 evoked a classic Doom feel while bringing the series into the modern environment.  By most accounts it was very successful in doing so.  We’ll get the chance to see if Id Software can repeat the success when Doom VFR is released for Steam and PSVR on December 1st.  You can learn more about Doom VFR on the official Steam page or on Bethesda’s store page.