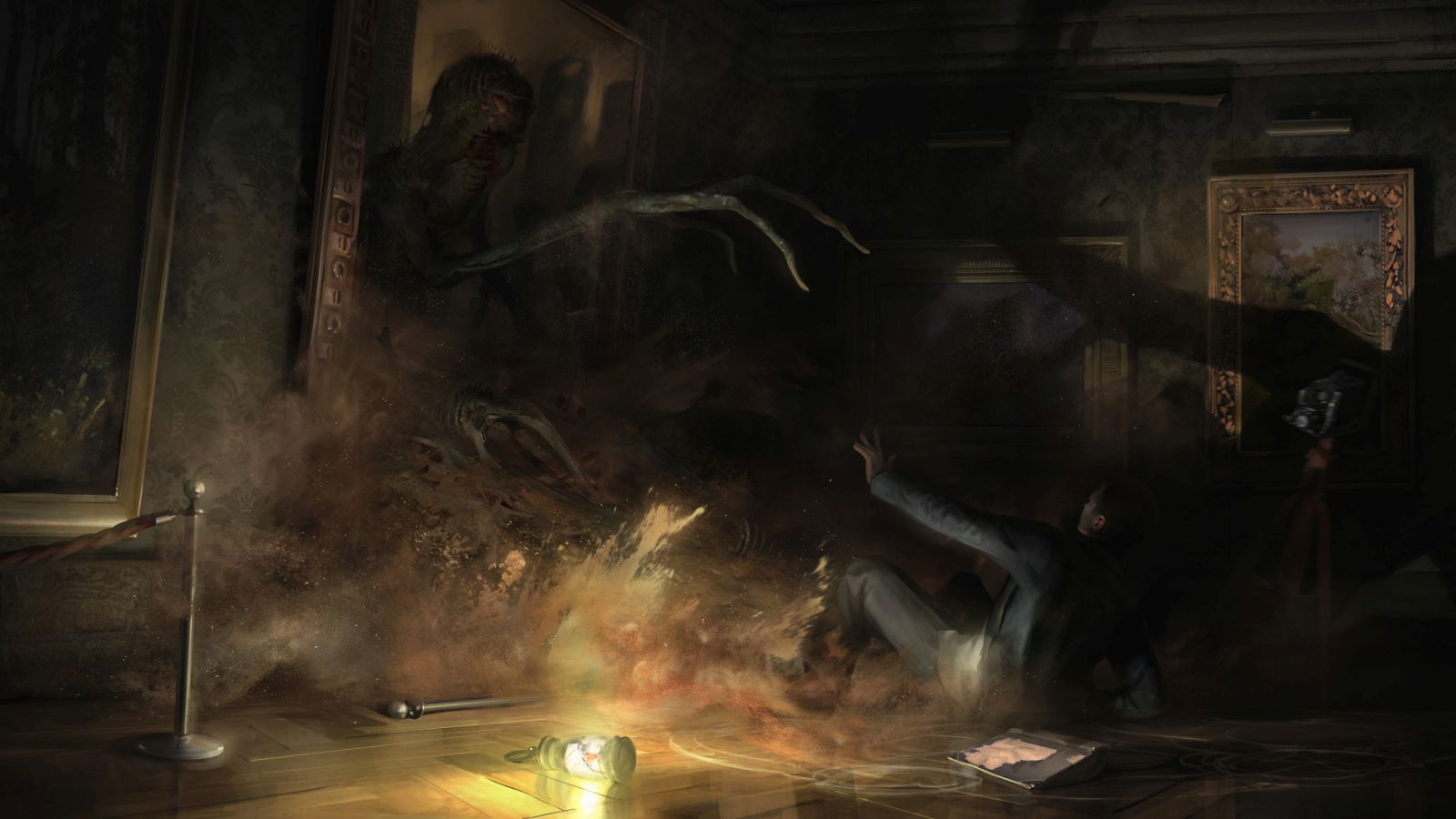 I’m a sucker for all things Lovecraft, and I enjoy the mythos around the Old Gods most of all.  The team at Frogwares shares in my love of Cthulhu, and they showed a bit of it off in a demo at E3 2018 in their game The Sinking City.  A semi-open world RPG, the title aims to build on the strength of their fantastic Sherlock Holmes titles with some entirely new mechanics.

The game takes place in in the early 1920s in the city of Oakmont in the United States.  The city has partially flooded, leaving the residents to try to get around in motorboats and, where possible, on foot.  You play a detective named Mr. Reed who’s been tasked with discovering the source of some disturbing things occurring across the city.

Beyond this objective, the game does very little to guide you.  There are no objectives or map markers — it’s an open world for you to discover.  In our demo, Dorothy Evans’ husband has gone missing, and she’s trying to hire us to discover if he’s missing, dead, or simply lost.  She, like most of the people in this semi-ruined city, has almost nothing, so she offers her wedding ring as payment. We refuse (though we have the option to accept it as payment), and use the clues she offers to head to the local watering hole to see if he might have ended up there.

Getting around the flooded city is a challenge.

Hopping in our boat with its little outboard motor, we begin to zip through the flooded streets. Menacing tentacles skurry away from the little ship, flotsam and boats riddling the edges of the shops in the periphery.  Arriving at a nearby docks, fisherman dot the landscape, eyeing us suspiciously. That’s when I noticed the gills…

Something unnatural is happening here.

Steering clear of the human / fish hybrid creatures, we head towards the bar.  The front door is locked, so we climb the hood of a nearby broken down bus to try the door on the second floor.  Inside, we find rotted planks, as well as evidence of a struggle, weapon ammunition, film for our camera, and cans of food places on the shelves.  My demo driver points out a symbol on the wall — a large eye and comments “Now, we don’t know what this eye means”. I interrupt him “Yes, I do. It’s the Esoteric Order of Dagon”.  The look on his face was priceless as I was absolutely correct. That said, our character doesn’t yet know this fact — we’ll have to travel to the nearby library to uncover this knowledge.

As we make our way out of the bar, we stumble across our first example of true madness.  A creature made of entirely too long of arms and far too many joints scurries across the floor.  Voices whisper in our ears as our vision streaks and warps. Our limited ammunition is taxed as we dispatch these hideous creatures, and we are reminded that The Sinking City is not a combat game.

No, you are not watching Stranger Things — this is a beast from the world of Lovecraft.

Escaping the freakish scene, we make it to the library.   There are seven different districts that make up the city, each with a large number of locations that you can visit and explore.  Heading into the central district, we find ourselves surrounded by tall buildings with beautiful architecture and wainscoting. Finding the librarian, we are aghast to find that her mouth has been sewn shut.  She’s being punished for saying things she shouldn’t. She indicates that she’s not seen this symbol before, sending us to inquire in some reference books for a possible clue.

Using the fast travel system to head to the fish market, as indicated by the reference book (and our demo driver) we spot a sign that says “Feel the gentle touch of tentacles”.  On the horizon there is a massive monolith that looks like a chitinous claw reaching into the sky. Hybrid Innsmouth fisherpeople are all over this part of the city acting as fishmongers and dock laborers.  They are only too happy to talk to us, their otherworldly eyes unnatural as the breathing through the gills in their neck.

The open world is expansive and yours to explore.

Following our clue, we head into the basement of the fish market (because, what could go wrong?) and we find an alter.  The demo driver once again checks my knowledge and I indicate that it’s indeed an alter to Dagon. He takes a step forward and we are immediate greeted by Dorothy Evans.  She says “I’m sorry…I had no other choice” and we are cracked on the back of the head and end up on the altar. Had we spent more time in the library and looked through the clues we might have been able to discover this was a trap, shot our way out, possibly gunned down our assailants, talked down or even shot Mrs. Evans, or several other other outcomes.  The choices, and the consequences, are entirely yours.

The outcomes in this world are not always pleasant…

I hadn’t heard of The Sinking City until a week prior to E3, but now that I’ve seen it, I am eager to see how the open world embraces the mythos.  Frogwares and their work on Sherlock Holmes makes me excited to see how the investigation elements of the game shape the story. It’s nice to be surprised at E3…

The Sinking City is headed to Xbox One, PlayStation 4, and PC on March 2019.