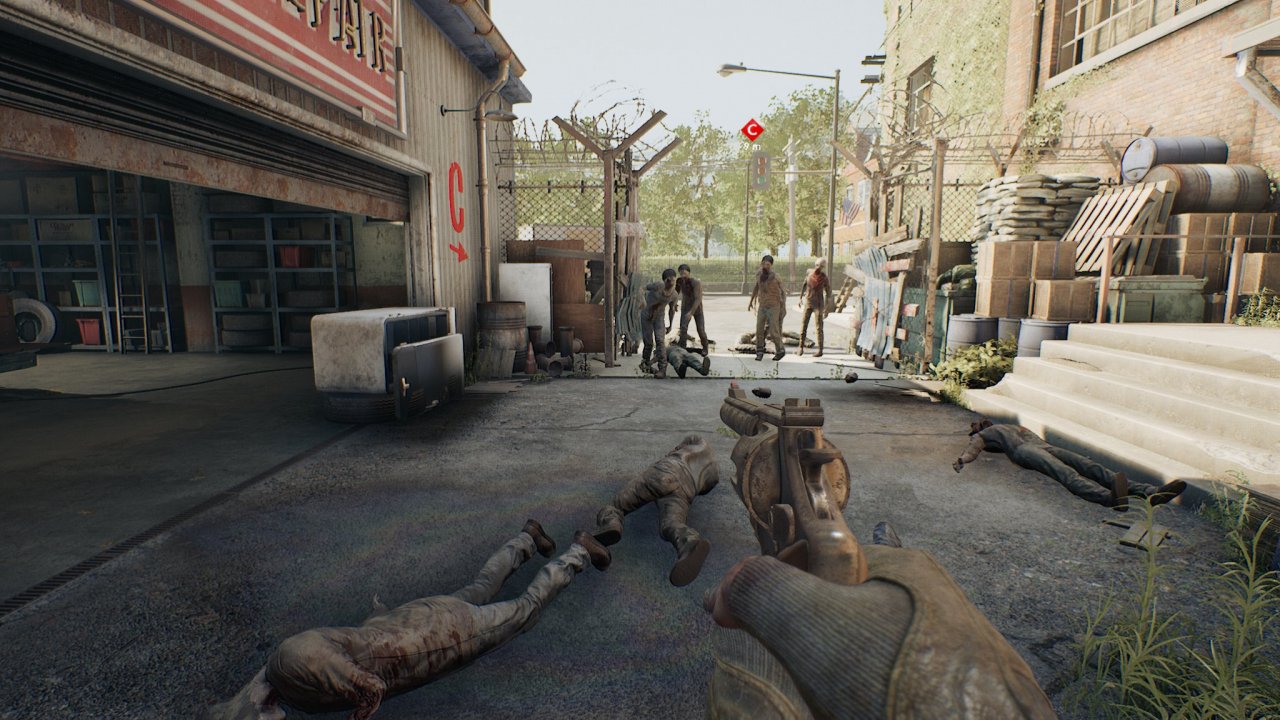 I didn’t quite no what to expect starting up Overkill’s The Walking Dead. What I certainly didn’t expect was one of the worst AAA titles I have ever played. While it is technically a beta, the full game launches on November 6th, which means the developers might not have the time to fix the many faults with the title.

What are those faults? Well… the entire game could be considered one. If you told me this was an alpha and the game wasn’t launching for at least another six months, I would absolutely believe you. The animations are horrendous and unfinished, the graphics are bland and look like they belong on an early PS3 title. The shooting is just as satisfying as the lazy enemy design, which is to say very monotonous and dry. There is a half-baked story to match the half-baked game mechanics.

Okay, let’s slow down a bit and tackle these issues one by one. The animations are some of the worst I’ve ever seen. When zombies break down a gate, it happens automatically with no force. The gate just falls down and zombies run in. Repairing said gates feature a similar action. There is no real animation for fixing the gate, you just hold a button and watch the bar fill up. Once the gate is completely fixed, it just closes and all the zombies outside magically disappear. Zombies will float in the air, graphics pop in and out of existence, and so many more little issues that I just can’t list them all.

Zombies are generic and poorly animated.

As for the zombies, there are three special zombies I noticed in the game and they are all painfully generic. You have your ordinary zombie that explodes when it dies. Crawling zombies that are a pain because the hit detection is terrible which makes hitting them in the head to kill them far more difficult than it should be. Lastly is the armored zombie, which just required knocking the helmet off before killing. It takes maybe two extra bullets.

Defending against zombies is the only mode that even comes close to fun. Being overwhelmed by zombies as you fight for your lives should be entertaining,but there is just too much baggage dragging it down. As soon as you load into a match you have a pretty big problem. The game only spawns you with one full clip of ammo. Except with the submachine gun, where it gives you one bullet less than a full magazine for reasons I can only guess at. You have a limited time to grab ammo, lay barbed wire, and grab boards to fix the gates the zombies are about to break down. With the ammo crates, only one player can use them before they cool down and only give you three magazines, which is your max. The barbed wire doesn’t even seem to do anything. It’s supposed to slow zombies down but my friends and I could never tell the difference. As for repairing gates, Call of Duty this is not. You can’t protect the gates, as they just break down and you have to fix them or you lose. If all three go down, you only have about a minute to get one up or you instantly fail. I despise time limits like this. It presents an artificial difficulty rather than a fair and balanced challenge.

Setting up barbed wire doesn’t actually seem to do anything.

Going against humans is the exact same process except it it borders on impossible. Instead of generic zombies, you get generic dudes with guns. You have all the same problems of the zombie defence with a few new ones thrown in for good measure. See, being majorly outnumbered doesn’t work when the other people have guns. It is incredibly easy to get surrounded and murdered instantly. If the AI decides to work, of course. Sometimes they might just look at the ground and let you murder them. The numbers are made even worse since there is no ability to take covers. Bullets just fly through walls to hit you anyway. It doesn’t help that both humans and zombies will just spawn randomly behind you. I have witnessed zombies and humans just popping into existence to screw somebody over.

The last mode, exploration, might be the worst of the three. It once again only starts you with one magazine of ammo, forcing you to use melee, which is terrible. The melee just consists of two light attacks to the head or one heavy with a token stamina system. There is no depth or skill involved. So you and up to three friends just end up bashing zombies watching them stumble and fall over as you collect pointless items for crafting. You can craft lockpicks, bandages, and grenades. It offers nothing special and is only there because every game needs crafting now. You also stumble across traps which almost certainly kill you as they are difficult to see, even with the Scout’s special ability which highlights traps for a short period amount of time. This type of mode also introduces “puzzles”. These usually just include grabbing a certain number of items and bring them to a place. This is tedious since you can only carry one type of an item at a time. Need six fuses? You have to find them and carry them all back individually. Having friends helps, but doesn’t make it any less boring.

This is where my HUD just randomly deactivated. I didn’t have it the entire match and I couldn’t fix gates.

For all three game modes, you can choose from four different characters. In reality, all you really need is the medic. The submachine gun is one of the best guns you can use and healing is the only consistently useful skill. The scout highlights useful and dangerous items for a short amount of time and for a very short distance. The tank has more health and takes less damage if consecutively hit but you die so quickly this doesn’t really help, especially against zombies since they somehow deal more damage than bullets. The tactician can make it so enemies take extra damage, but most of the enemies die in just a few headshots and it is incredibly difficult to use in a horde of enemies that it is essentially useless. The medic gets a backpack that allows people to heal and revives people quicker and with more health. This is actually useful and there is no reason not to just use her.

Lastly, all these complaints rely on the game even working. I suffered so many glitches, disconnects, and crashes in my time that they about equal the number of zombies killed. Once, I spawned with no HUD and was unable to repair fences. Several times my friend or I would just be stuck in a black screen and the game would never load for us. Each mission has a corresponding opening cutscene that, for whatever reason, only the host can skip. The host can watch a loading screen while everyone else is stuck listening to the same dialogue we’ve heard for the thousandth time. It also does that obnoxious thing where after every match it kicks everyone from the party instead of just letting us stay together to keep playing.