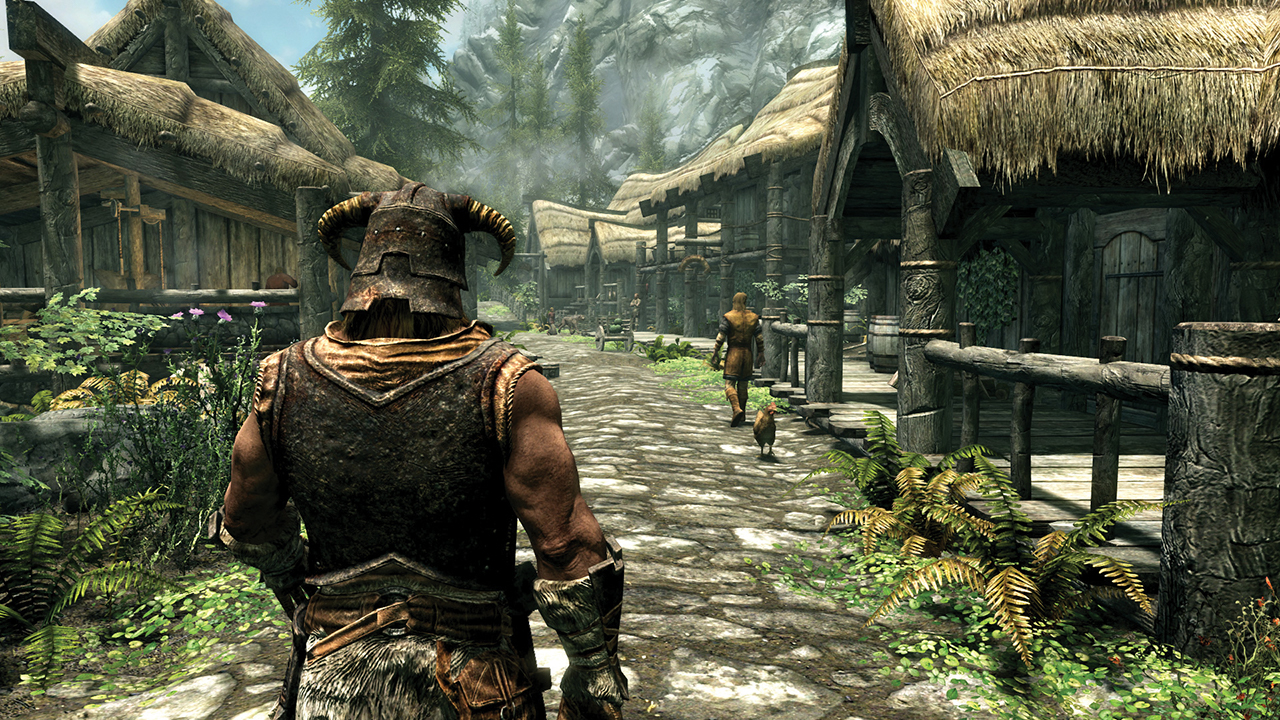 Skyrim feels right at home on the Switch; it’s the same game you know and love, but now you can play it on a smaller, more portable device.

The world of the Elder Scrolls has captured the imaginations of countless gamers, and allowed them to explore a magical world over and over again through the eyes of countless custom made characters. It is time to open your wallets and purchase Skyrim… again. This time you will never have to be far from an adventure,  as The Elder Scrolls V: Skyrim Special Edition is coming the Nintendo Switch. I was excited to get some hands-on time and check out the big world of Tamriel on this portable  platform.

I spawned on a rugged mountainside, lush with plants growing alongside a stream, and wandered along until I found a familiar triad of monuments: The Thief, Mage and Warrior Stones. Pausing to gather moss off the backside of the Thief Stone, I selected my class, and wasted little time diving into the slightly choppy waters of the stream and splashing my way to the other side. The game ran beautifully, delivering all the visual delights of the PC version of Skyrim without any framerate lag or stutter.

Climbing out of the water, I stripped the Joy-cons from the sides of the Switch and equipping the bow and arrow so I could try out the motion controls. I have no problem finding a beast to creep up on, and aiming and firing an arrow proved to be both easy and natural, even without the Strap attached to the Joy-cons. It’s difficult not to compare Skyrim to The Legend of Zelda: Breath of the Wild, given the open world nature and the weaponry of both games, and I couldn’t help but notice, after logging roughly one hundred hours into Zelda, that time did not slow down when I drew my bow. Likewise, there was no way to lock onto or target an enemy, which meant I always had to be aware of the location of my character, and which direction she was facing, in order to be effective in battle. This isn’t anything different for Skyrim, and it’s not something I would have ever noticed if not for my time in Zelda, and it’s an element of gameplay which Breath of the Wild players will need to adjust to.

Skyrim on the Switch is like visiting an old friend. It’s the same game and does exactly what you want it to do, it just does it on a portable device

Speaking of Breath of the Wild: I was excited to see the Zelda items which will be available in the Switch version of Skyrim, and frantically dug through my inventory, but my character in demo, tragically, did not come equipped with the Champion’s Tunic. I guess I’ll just have to wait for the official release.

The controls in Skyrim are pretty intuitive, but they are also entirely customizable. If you hate using the trigger to swing your sword, you can switch it and use the B button to swing and the trigger to jump. Switching from first to third person is as easy as pressing the right thumbstick down. Every command and tool is there, and the in depth customization of everything is a very nice feature.

Skyrim feels right at home on the Switch; it’s the same game you know and love, but now you can play it on a smaller, more portable device. One thing of note is that mod support is not planned at this time. If you’ve been eager to scratch the Skyrim itch again, or are looking for an easy way to introduce a younger generation to this classic open world RPG, the added portability and accessibility of the Switch could very well serve as the perfect portal. The Elder Scrolls V: Skyrim Special Edition will be available on the Nintendo Switch November 17th.