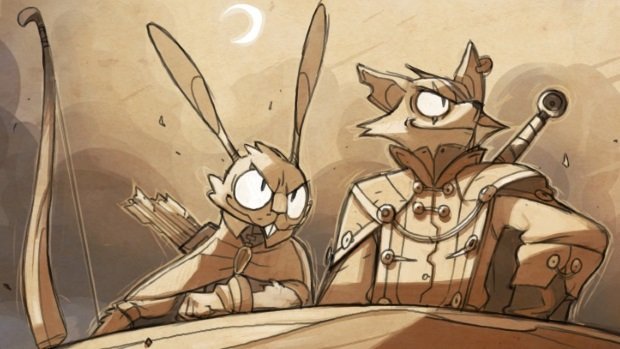 Every story has a branch, a “what-if” moment where the protagonist wonders if they might have been able to do something differently. Stories is a game about those moments, where one after another, the choices you make weigh upon you, either leading to your untimely death or the solution you seek.

As Reynardo, a fox with a quick wit and a quicker sword, you play the Han Solo to an evil empire. Seeking to find a way to stop the empire before all is lost, you must make a series of choices.

At the end of each level, you make a decision that determines what area you will explore next, and what your objective will be. Do you go to save your friend in need, or do you continue your search for the mystical “Skyripper?” Do you visit an old acquaintance to seek help? She might be friendly, but she might also be working for the empire as a double agent.

As you progress down paths, you’ll often die. There’s only one true route in Stories, as the rest are fraught with disaster and ruin. As you fail, though, you learn – each path has a “truth” that will help you determine what the true path to salvation is.

“It was a bloody nightmare,” Spearhead Games co-founder Atul Nath Mehra says about tracking all the different potential plot lines. Mehra said they had to bring in an outside writer to assist with all the diverging plots and narratives. The person they found: Alex Epstein, writer of both the upcoming We Happy Few and 2013’s Contrast.

“We brought in [Alex] to help us with all the branching paths and to add humor, like pop culture references,” Mehra says. The team also recruited Nadim Boukhira, a freelance writer for games, to help flesh out the story of Stories.

Stories isn’t just a game about weighing pro’s and con’s, though. It’s also an action game, letting Reynardo put his deft combat talents to use. Alongside your sword, which can be attuned to different elements, you also have a hook that can let Reynardo zip across chasms and pull distant enemies into close-quarters combat. Reynardo can also zip around the field of battle with a quick dash.

All these moves are upgradeable through an elegant upgrade system, and they each carry across different playthroughs and paths. It helps to have options, as enemies vary across different areas – while some levels may feature a more direct combat, others may have bottomless pits that you can toss enemies into, so upgraded grabs might be more effective.

The art of Stories is incredible as well, with a mix of pastel colors dotting the battlefield to dramatic comic panels that tell the out-of-combat story. Many influences went into this game, from popular indie gems to even Japanese manga.

“[Our artist] would be working and have Japanese manga on one screen and his work on another,” Mehra says. “He also drew from games like Bastion and other titles.”

All this is held together by Stories’ narrator, who guides the player and Reynardo’s path through the game. Those who play a fair amount of titles might note his voice — Stories is narrated by Julian Casey, who provided voiceover for games like Far Cry 3 and Deus Ex: Human Revolution.

Stories is early on, but already looks promising in what it offers: an effortless blend of Choose Your Own Adventure storytelling with a free-flowing combat system that brings up shades of Arkham or Zelda. Look for Stories on PS4 in Q1 2016, with Steam to follow sometime later.