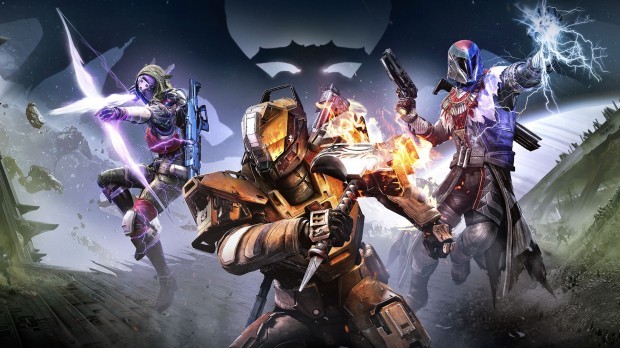 It wasn’t long after setting foot on the dark, dreary moon of Phobos that I began to feel that something wasn’t right. Cabal starships flew overhead, but instead of engaging me per their usual unsubtle methods, they sped away. My Titan crept down a mountainside and into a silent metal structure embedded in the planet’s surface. The familiar voices of Commander Zavala and Eris Morn echoed my concern–something was definitely wrong here.

As I peeked down a dark hallway, I noticed some peculiar black ruptures in the walls, as if a dark energy had manifested and was oozing into the compound. Moments later, a fleeing cabal warrior was stopped in his tracks and vaporized in a white flash of light. I picked up the pace and headed deeper into the compound, only to find more chaos. A white orb zipped down a corridor and tore through another cabal alien; some became stuck in the black ooze and perished in a flash of light.

Then, as I entered a circular room, a horned creature appeared as a projection. I stopped in my tracks when he introduced himself as Oryx, father of Crota, and swore revenge upon me. Then the cabal that had been vanquished minutes earlier reappeared, this time as white shades of their former selves, and attacked me. Their bodies twisted and twitched in a tortured manner as they pressed their attack, implying that their actions were not their own, but I didn’t have time to consider the moral implications. I took out a few enemies and felt a bit of confidence when suddenly one enemy multiplied into two, then four, then eight. I ran for cover.

As enemies dashed toward me, “I checked my super ability; the meter slowly inched towards full.” At the last possible moment my super became available. My Titan pulled out a hammer and burst into flames. I dove out of cover and threw my hammer across the room, hitting one of the glowing white monsters in the face, then another, then another. A few of them grew bold and rushed me, and I leapt into the air, crashing down with the hammer in hand, eliminating them all at once.

When the smoke cleared, Eris explained the nature of Oryx’s power. She described how he is able to ensnare those he kills and can bend their will to make them his servants. I knew that the coming battle would be very unlike anything I’d faced before. I’d need the help of some friends.

There are moments in a game when the course of events take a turn for the awesome, and ramp up the stakes. For example, in Halo: Combat Evolved, when the flood first makes its appearance and the game spirals into a sci-fi zombie game. My short time with Destiny’s The Taken King was one such moment. It’s no secret that Destiny was not a perfect game at launch, and Bungie has worked to fix many issues afflicted the game since it launched close to a year ago. One issue that still comes up in every review, and in every comments section however, is Destiny’s story.

The Taken King seems to be Bungie’s first bold stride to fix the narrative issues and invest players beyond the next cool exotic weapon they’ll earn. As I played through the beginning of The Taken King, I realized that for maybe the first time since I started playing Destiny I was eager to hear the NPCs speak. I was emotionally invested in the story and figuring out what would happen next.

In The Taken King, Oryx comes to get revenge on the player (and his/her friends), and fundamentally alters the entire Destiny sandbox in doing so. Now, every enemy is susceptible to being deformed into a puppet of Oryx, and gains new, dangerous powers in the process. From their attacks to their AI, Oryx’s arrival aims to shake players out of their comfort zone and provide a deadly challenge.

In order to defeat Oryx, the Guardians are going to need some additional powers and weaponry at their disposal, and luckily they’ll be getting that with The Taken King. Every weapon I used, and every piece of armor I wore was new from The Taken King. More importantly, each class will be getting a third subclass added to aid them on their quest. The Titan gets the Sunbreaker subclass, which comes with a flaming hammer of Thor that he can throw and smack enemies to pieces with. The Warlock receives the Stormcaller subclass, and  can use arc lightning powers and can float around the battlefield zapping enemies. As for the hunter, she gains a new support class called The Nightstalker and a super ability that allows her to fire a void bow that damages and ensnares enemies. The progression trees for the new subclasses, weapons, and armor weren’t complete in the version I played, but it clear that the new subclasses aim to give each class what they lack from their existing two classes.

In addition, we were treated to two new PvP modes. Mayhem is a deathmatch in which super energy and abilities recharge extremely quick, creating absolute chaos on the battlefield. Rift, on the other hand, plays a lot like capture the flag. Players need to grab the spark, which is basically “the flag” I this game, and bring it to the enemy’s base to score. Player’s score by dunking the spark into the opposing team’s “rift,” but will earn even more points if they do it with style (e.g doing a backflip into the rift).

The Taken King is poised to be the biggest addition to Destiny yet, and will potentially give the narrative in the game a significant bump. Fans of Destiny should be excited for The Taken King’s launch in September, and those who abandoned Destiny or never tried it at all should keep an eye on this expansion. It’s clear that Bungie is determined to make year two of Destiny vastly improved over the first year, and that’s great news for gamers..