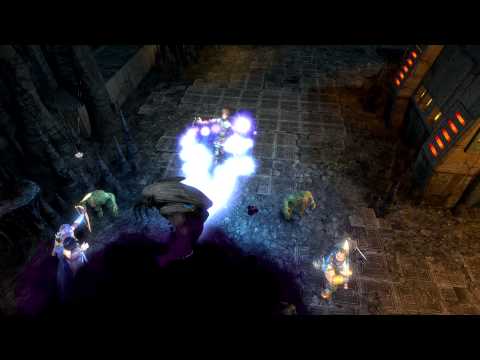 At E3 you take a lot of appointments. In fact, across three days we ended up taking nearly 70 of them between the eight of us. The best part about having that much chaos in your life in such a short period of time is that it makes the real gems of the show shine oh so brightly.

We ended up missing our appointment for Sword Coast Legends. We tried to reschedule, but the insanity of the show made that difficult. With some creative adjustments I managed to pop in to see the game myself. I’m so very glad that I did.

Sword Coast Legends is a Dungeons and Dragons property. The single and cooperative multiplayer game centers around your guild, the Order of the Burning Dawn. Your character awakes from a somewhat prescient nightmare only to find that the Order has been all but destroyed, leaving you to figure out who was behind the attack and stop them, all while evading mysterious assassins. Ok, so clearly we don’t know much about the storyline here, but that’s not what made this demo so amazing — let’s talk about DM tools.

If you’ve ever played pen and paper Dungeons and Dragons, listen up, as this may change the way you run campaigns.

With a menu-driven system, the devs rapidly built an overworld area and a small dungeon bit by bit. In this adventure we’d have to find a character named Gywn, so with about four clicks Gwyn was created and dropped into the world. Players can write dialog, speech triggers, background, and much more, or even use VOIP to DM the whole scenario live if they are so inclined. Popping out to the overworld, we got to see how simple it was to create and place vendors as well. Using a somewhat boolean style menu engine, a potion, armor, and vendor cart were dropped into the world, ready for use. Like everything else we would see during this demo, it is even simpler than it sounds.

Building zones is equally simple. Using selected tilesets (no word yet on importing your own), you can create mountains, forests, towns, and even the fabled Underdark. Piecing together a little cabin, the DM was able to change the weather from a sunny day to a torrential downpour of rain or snow. The effects are immediate, as is the change of day to night courtesy of simple sliders. Placing additional characters allowed us to see this same simplicity applied to skin tones, equipment, stats, backgrounds, abilities, and more. Each and every creature can be as unique as you’d like to make them.

A very quick peek at the single player campaign.

As our DM built his custom “Cult of the Sinister Queen” scenario, he also showed how easy it is to control behavior. Ambush triggers and behavior modifiers are placed in a drag and drop fashion, as are monsters, props, and quest triggers. Clicking on a corpse, our DM was able to snap a quest trigger to pop any time a player clicked on the dead body, adding a splash of blood from a head wound for added flair. Because most DMs are sadists, he also added a trap trigger to the body for a little bit of ‘fun’.

Our demonstration continued with the creation of the dungeon underneath this cabin that we would eventually run. Entering Dungeon Master Mode again, the real magic of Sword Coast Legends began. Names, descriptions, types of dungeons, tilesets, size, number of floors, creature sets (or completely custom) and even options boss quests are all at your fingertips with a few clicks and drags. Everything seemed incredibly intuitive and very user-friendly, even for novice builders.

It’s not an adventure without a tavern.

Because this is Dungeons & Dragons, the world absolutely needed traps and secrets. Dragging and dropping rooms into place, the DM then hid the door and applied an ability check trigger. A perceptive rogue (or a lot of luck) would be required to find some of the loot and hidden objects, or it would be had we not just watched the DM build it.

As the construction portion finished, I was amazed by the number of props available for would be dungeon masters. Altars, bones, headstones, spiders, drow, swords, armor, and pretty much anything else you might think of is available to tweak to your heart’s content. Building a final boss for our dungeon, our DM was able to modify that bosses name, title, faction, history, spells, abilities, stats, level offset, robes, masks, and many more functional and cosmetic choices. With this simple engine you could recreate any of the fantastic pen and paper modules you might have ran in the past, letting you and your friends experience the magic all over again in a new way.

Now that the dungeon had finally been built, it was time to run it. I selected Hommet, a Level 6 Necromancer (a wizard subclass for those who don’t follow as closely), but I could have easily created a character from the six iconic character classes and five standard races to start my adventure. Party balance is your choice, but obviously having a proper class loadout is very important to tackling a dungeon. With everyone in the game (it supports drop-in and drop-out coop), I felt immediate nostalgia for the pen and paper adventures I ran when I was a kid. With an attentive DM, there was always a challenge, and the game rewarded both sides for skillful play. The DM can even take direct control over the aforementioned bosses in the dungeon to maximize the challenge.

It’s very clear that Sword Coast Legends is built on four main pillars — progression, story, exploration, and combat. When players get knocked unconscious or the placed monsters are getting absolutely destroyed, the DM can be rewarded with little bits of loot that allow them to further tailor the experience. This can allow them to raise or lower monster levels, apply buffs to existing creatures, or even spawn more monsters to raise the stakes. Players, of course, receive precious loot and experience points for playing well and exploring the space, incentivizing both sides to do their best. The DM is further encouraged by the ability to rate both their creations and their DM skills at the end of the adventure.

I wasn’t sure what to expect out of Sword Coast Legends, but I came away extremely surprised and impressed. The game, even at this early stage, felt complete, intuitive, and extremely polished. The game reminded me why I fell in love with the D&D world in the first place, and reinvigorated the DM within me. I can see many a late night in my future, recreating scenarios from Curse of the Azure Bonds, or Vault of the Drow, and I couldn’t be more excited.

Sword Coast Legends releases on September 8th for PC, Mac, and Linux, and “Late 2015” for Xbox One and PlayStation 4.