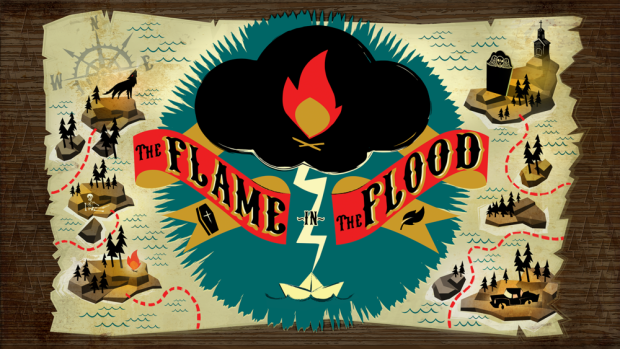 The Flame in the Flood is a procedurally generated survival game by Molasses Flood. During my time at the PlayStation Experience last week, I had the opportunity to sit down and chat with the developer and check out the game, which was easily one of my most memorable and enjoyable moments from this year’s PSX.

The Flame in the Flood takes place in a post civilization world of the American backwoods. You play as a survivalist whose skills are more important now than ever before. Along side your trusty dog, you will have to brave an unforgiving and dynamic world, where a wrong decision could spell disaster.

To make the survival aspect of the game more thrilling and immersive, the game uses permadeath, which means if you die at anytime during a play-through the game is over and you will have to start from the very beginning. This really helps to set players in the same mindset as the character, because in The Flame of the Flood, dying, is the end for both of you.

In The Flame in the Flood there are two modes that you can play: the traditional story mode takes place over ten different regions with characters and sidequests littered about, and the endless mode, where players are challenged to live as long as they can with constantly dwindling resources. When talking with the developers, they told me that, “The people who tend to survive the longest are the ones that use ingenuity to survive, such as getting animals to fight each other rather than themselves.”

To survive, you will have to find food and water, face off against vicious wildlife, and craft things, such as items and tools. You don’t fight animals in a traditional sense, rather you use a stick to fend them off, so if you run into an animals that won’t leave you alone, and you don’t have the supplies to build a trap, you will have to run in order to survive. Your character has multiple health gauges, such as hunger and tiredness, on which you will have to keep a close eye. If you don’t take care of your character, they will start to become sluggish before perishing.

I love a good day-night cycle, and the one I got to see in The Flame in the flood looked great. Some animals, such as wolves, are nocturnal and don’t come out during the day, so being careful during certain hours made the world more immersive. If you do happen to run into a wolf, which I was fortunate enough to see, it initially tries to avoid you until you repeatedly venture too close to it. I was completely blown away by this; having an in-game animal worry about its own survival, rather than having a set distance at which it attacks, was wonderful to see and made the world feel more alive and realistic.

The artwork of The Flame in the Flood brings the world to life in a perfect way. It is both grim and beautiful, which starkly represents a person’s fight for survival. When I got to see the main character meet other NPCs in the game and their dialogue boxes popped up, I was amazed by the incredible illustrations of each character. Their dark twisted faces left one of the biggest impressions on me throughout my whole time at PSX. I might even go as far as to say that it was some of the most unique artwork that I have seen in any game.

The game consist of islands on a river that you travel between using a raft. Each island in the game is procedurally generated making each playthrough and everyone’s fight for survival different, which really helps to separate The Flame in the Flood from some of the other games in the genre.

While traveling down the river, you will see waypoints for such as a bait shops or other buildings, that might have supplies that you need. Choosing which waypoint to go and explore ends up being crucial for survival, because you won’t always be able to go back and explore other options. Making the wrong decision could mean running out of resources. While I was talking to the developers, It was abundantly clear that the purpose of this game is to always be going forward. They told me, “We didn’t want to allow players to go back because, as most survival guides will tell you, going back in a direction that you have already been doesn’t improve your chances of survival.”

An aspect that I found to be very interesting during my time with the game was that your dog actually doubles as a second backpack but, unlike the backpack that you wear, anything stored on your little buddy doesn’t disappear when you die and will carry over to your next playthrough. In addition to the backpacks you and your dog have, you can also store extra supplies on your raft, which you can go back to collect at anytime. Storing supplies for future use is pivotal in endless mode. If you are trying to last for a long time, having an extra place to keep resources that you don’t need right now but might need in the future is quite useful.

The Flame in the Flood is out now on PC and the complete edition, which will include a director’s commentary mode, gameplay enhancements, PS avatars, and a dynamic theme, will be released on PS4 on January 2017.