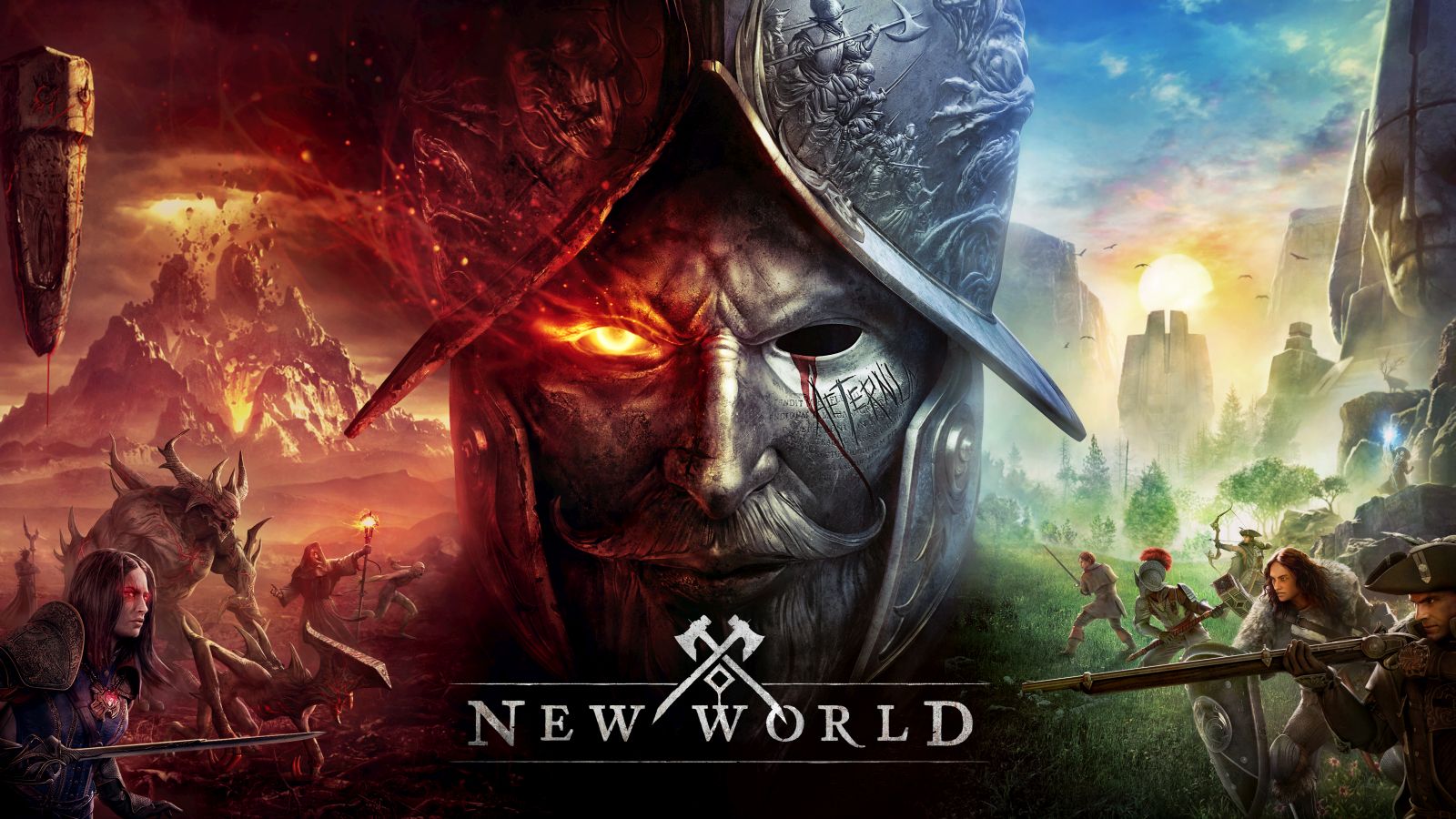 How in the world do you preview an MMO? By their very nature, massively multiplayer online role playing games are expansive and full to the point of overflow with choices. Developer Double Helix Games and Amazon Games, after several delays both large and small, are almost ready for all of us to enter the world of the early 1600s, and we’ve had the opportunity to revisit the game for an early hands-on preview. Let’s watch the introduction video for a little context on Aeternum Island, and how I ended up there fighting for my life.

As I wake up on the beach, I see that I’m surrounded by what appears to be the reanimated remains of my fellow sailors. This tutorial section starts off by showcasing one of the things that makes New World different from any of its contemporaries. Readying a sword I found among the wreckage of the beached ships, I engaged an undead thrall. Using my basic attacks with the left mouse button (click for light, hold and release for heavy attacks), I turn to my right mouse button to actively raise my defense. As heavier attacks headed my direction, my stamina ran low and I used the shift key to roll away to safety. Combat in New World is very active and requires much of the player’s attention — far beyond just pressing the number keys like other MMOs. Instead, New World uses the mantra “the more you do it, the better you’ll get at it”.

While I had few options at my disposal to start, by the time more choice appeared I was at least something approaching dangerous with a sword and shield. Swinging my blade raised my skill with a sword, rewarding me with points to allocate towards active skills. There are a total of 11 classes of weapons — specifically sword and shield, rapier, hatchet, spear, great axe, war hammer, bow, musket, fire staff, life staff, and frost gauntlet. Using skills levels you up independently of your character level, granting skills like Whirling Blade or Shield Rush. All that to say that there is no such thing as a character class in New World, but instead just roles you’ve practiced.

These first few hours of the game saw me grow into a somewhat competent swordsman, but it also had me go from poorly equipped shipwreck victim to fashion-forward, useful party member. That said, I was surprised just how much I underestimated the ways I could benefit my team.

If gathering and crafting are your jam, and I’m totally in that group, then you are in for a real treat in New World. Once you reach a territory you’ll be introduced to all of the various ways you can create new gear, but that only scratches the surface.

Helping a territory grow is directly beneficial to the player. First off, you can upgrade the structure itself. In this case, this place started as a fort, transitioned to a bastion, became a keep, evolved into a castle, and eventually could become a citadel. Each of these upgrades offer you chances to build things like ballista, explosives, war horns, reinforced gates, burning oil vats, and emplacements to keep it safe. Beyond defensive improvements you’ll also see upgrades for the kitchen, workshop, outfitting station, forge, smelter, stonecutter table, loom, and so much more. I don’t know how many territories are in the game (more than a few), but it’s clear that this is a great way to make a simple destination into a home. 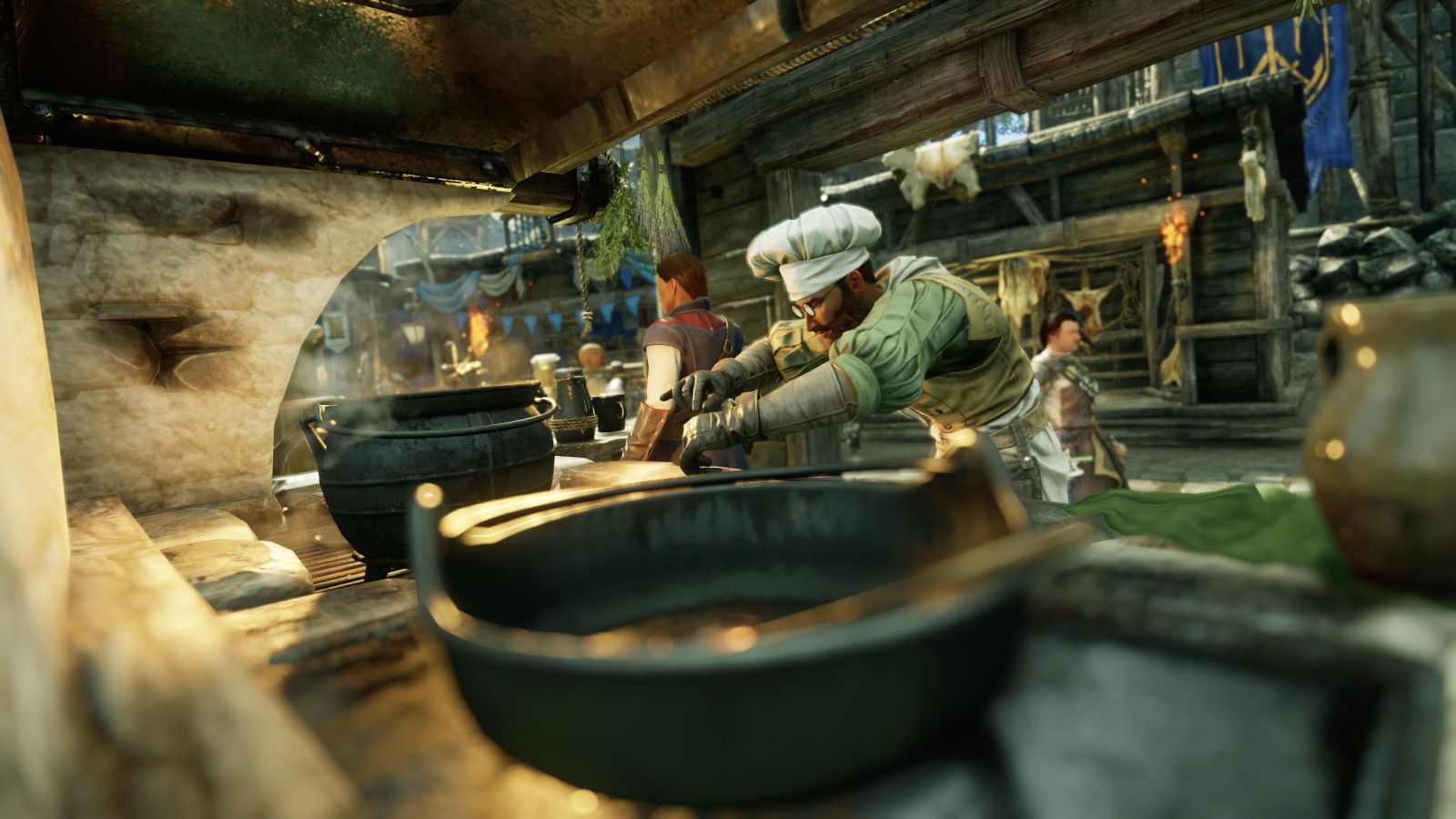 The town projects aren’t as harrowing as you might expect, instead giving you basic tasks to contribute to the overall goal. For example, hunting rabbits gives you 10 project points as well as some coins, an improvement to territory standing, and some XP. You can also harvest timber, bang out some iron armaments, fish, craft health potions, or embark on an exploration mission to find specific items to bring back to the town. These projects offer special long-term buffs to players who own a house in the territory, including increased harvest quantity, mining and hunting buffs, as well as a ton of crafting buffs for things like weaponsmithing, engineering, armorsmithing, cooking, and crafting Arcanist’s gear. It makes me feel like I can make a difference without giving me insurmountable tasks. 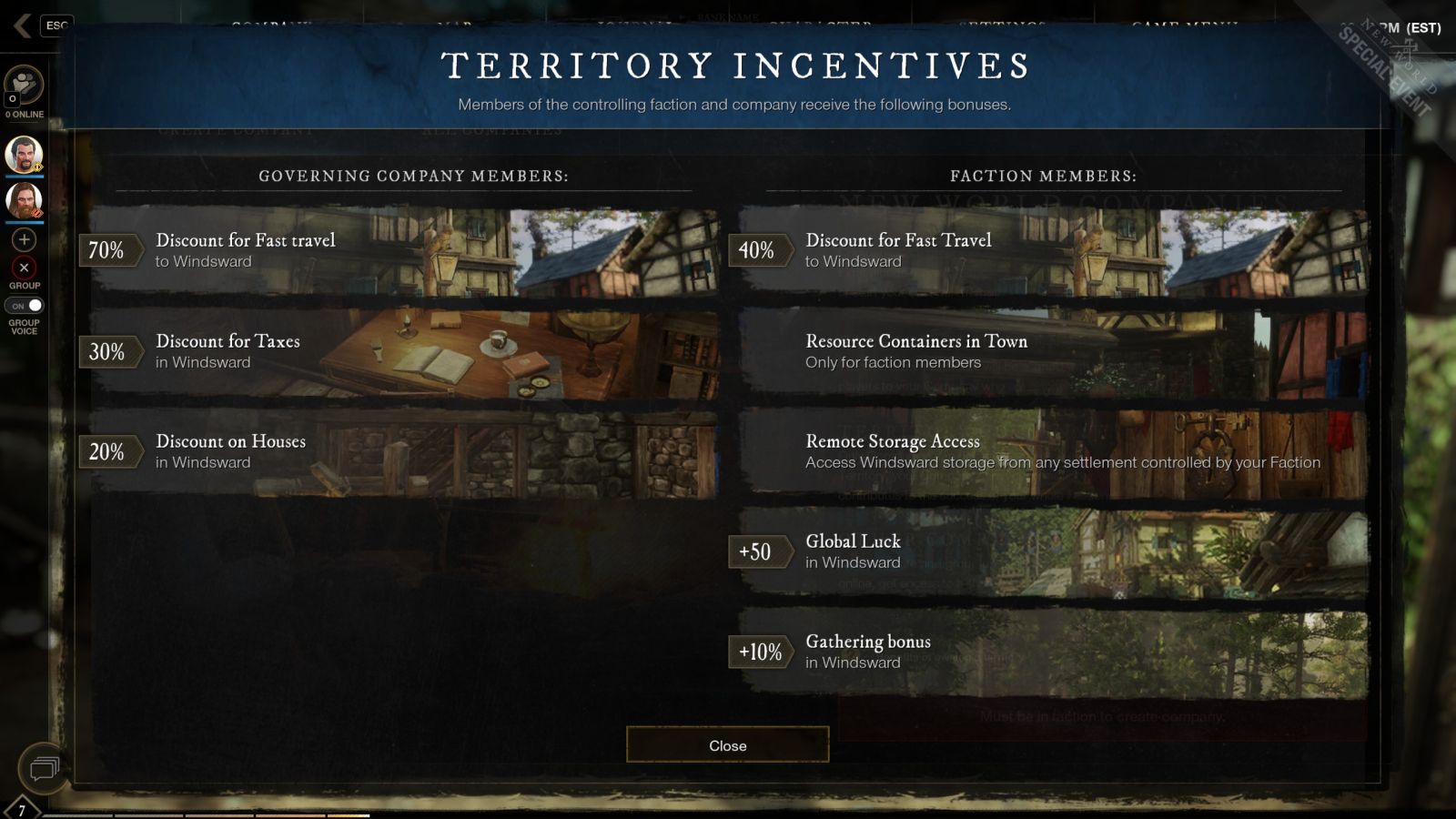 Beyond upgrading the town, owning a home in the territory also grants you discounts for fast travel, a discount on taxes (more on that in a sec), remote storage, resource containers, and much more. First things first, though — let’s go gather some materials.

Heading out into the forest to tackle the crafting tutorial I encountered the only issue I saw with the game — gathering. Using a pick on rocks and chopping trees had several of us scrambling around single-use resource nodes. I can see this becoming an issue unless the team has some way to alleviate this issue. With rocks, wood, pelts, and a few other materials, I headed to the crafting stations. Turning raw materials into usable ones means paying a small tax to the town, since you are using their equipment. This contributes to the overall improvements for the territory, encouraging players to buy and craft locally. 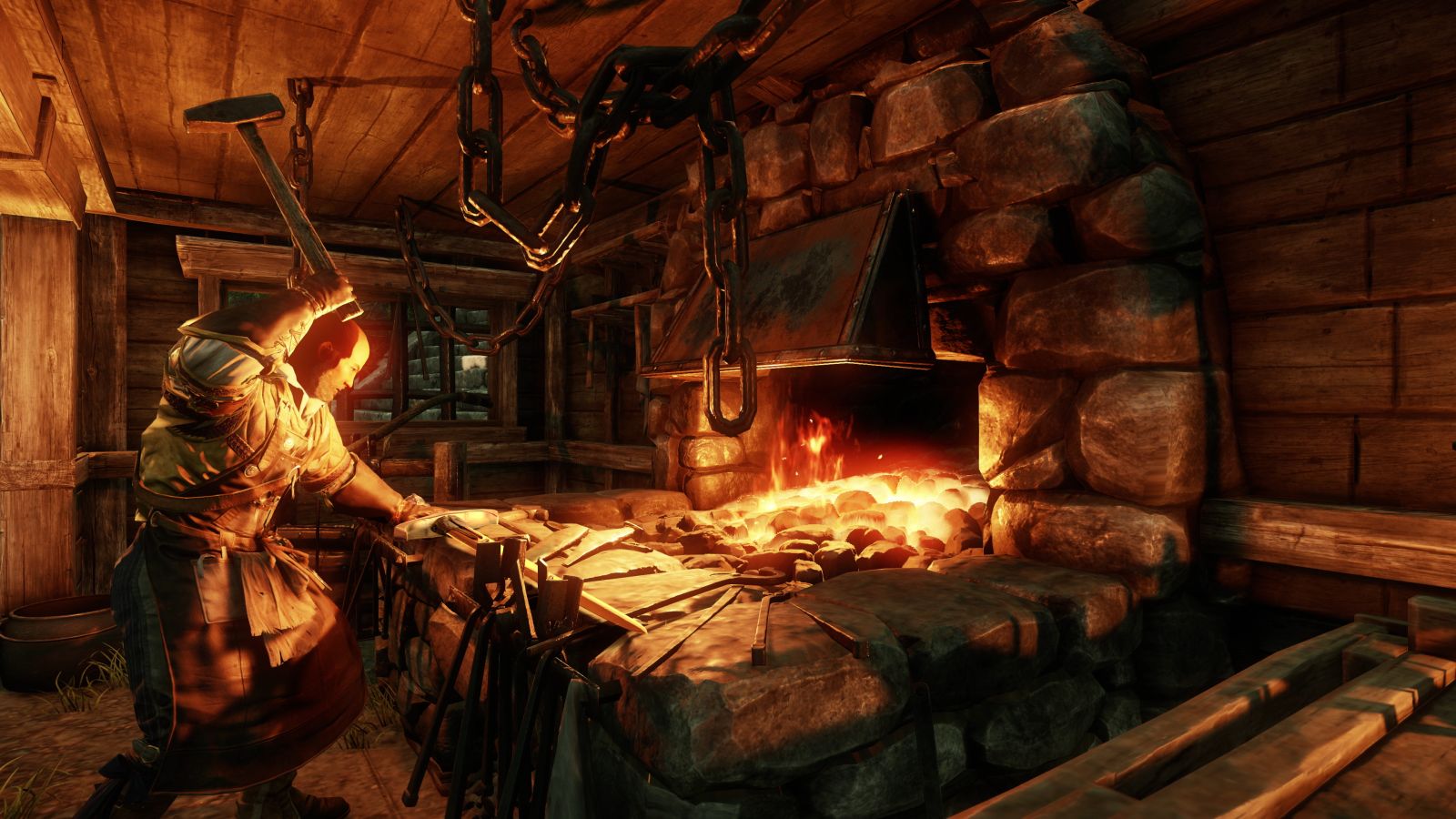 There are 17 trade skill categories split between crafting, refining, and gathering. Weaponsmithing, armoring, engineering, jewelcrafting, arcana, cooking, and furnishing rounds out the crafting list, with smelting, woodworking, leatherworking, weaving, and stonecutting being the refining skills that’ll let you build everything else. Gathering is divided up between logging, mining, fishing, harvesting, and tracking & skinning. Just like everything else, the more you do each of these, the better you’ll get at them. You won’t gain special powers, but instead faster execution of your tasks, and the ability to gather and process more complex versions of each. I’m reticent to speak about specifics of the crafting levels required to tackle each as the team is still balancing the game, but it’s a natural progression from basic woods to exotic ones, culminating with Glittering Ebony wood at level 200. Yeah, there’s a whole lot of crafting to do. 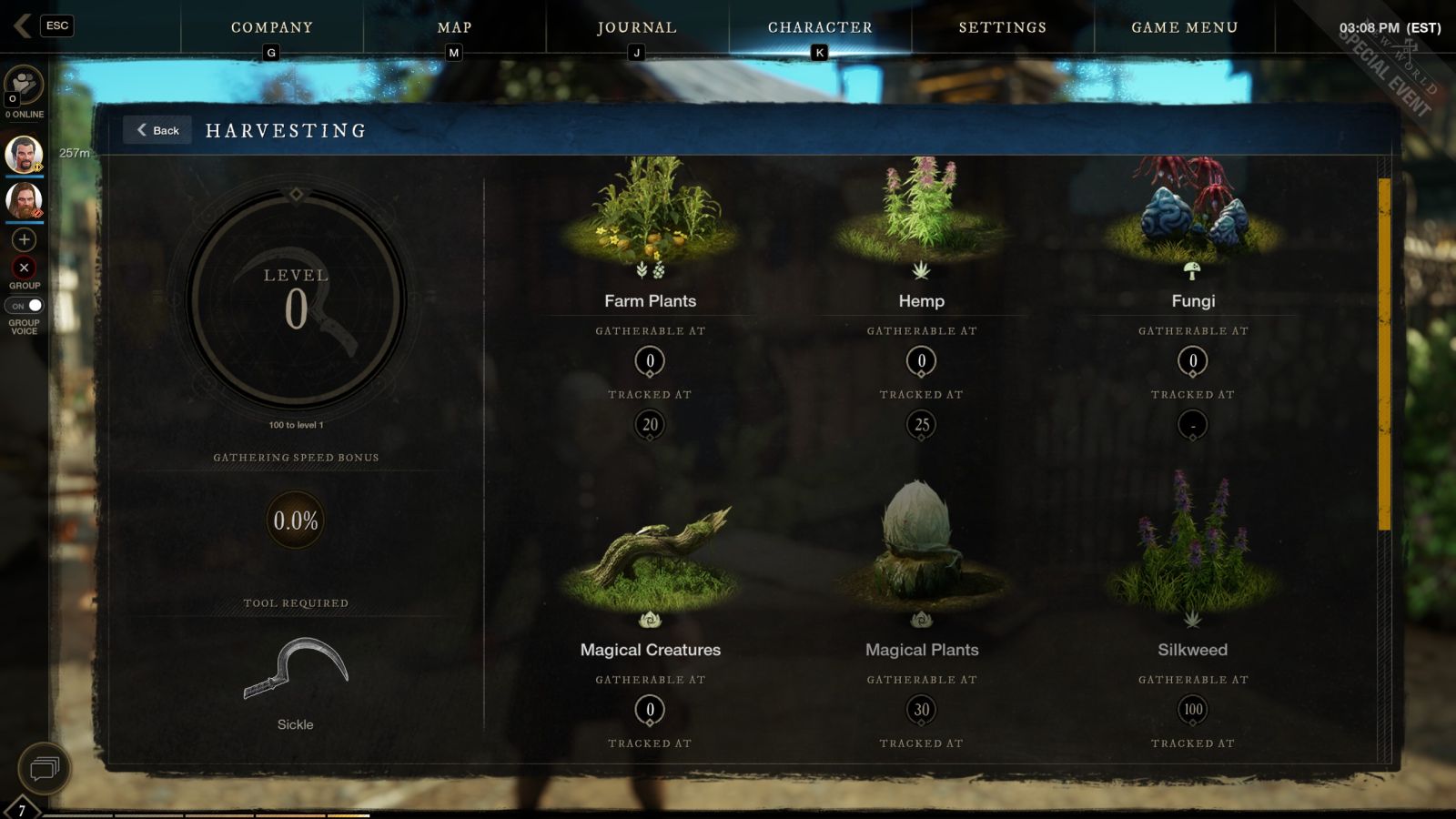 The fictional Colonial focus for the game imparts a number of outstanding armor sets, weapons, and manners of dress consistent with what you might find in the 1600s. That’s not to say the game can’t skew to the fantastical, but what’s on display most of the time is fairly grounded in reality. That said, there are healers and wizards, so there’s plenty of opportunity for a traditional caster garb here and there.

One of the cool conscious choices the teams made was in its user interface. Instead of opening what amounts to a completely separate page to manage your quests, weapons, levels and skills, everything in New World operates as a semi-transparent overlay. Bringing up your inventory places an overlay on the screen where you can manage your equipment. Gear is subdivided into categories, meaning it automatically separates out weapons and armor from ammunition, tools, and resources. It keeps clutter down and works remarkably well when you need to find something quickly during a tough battle. 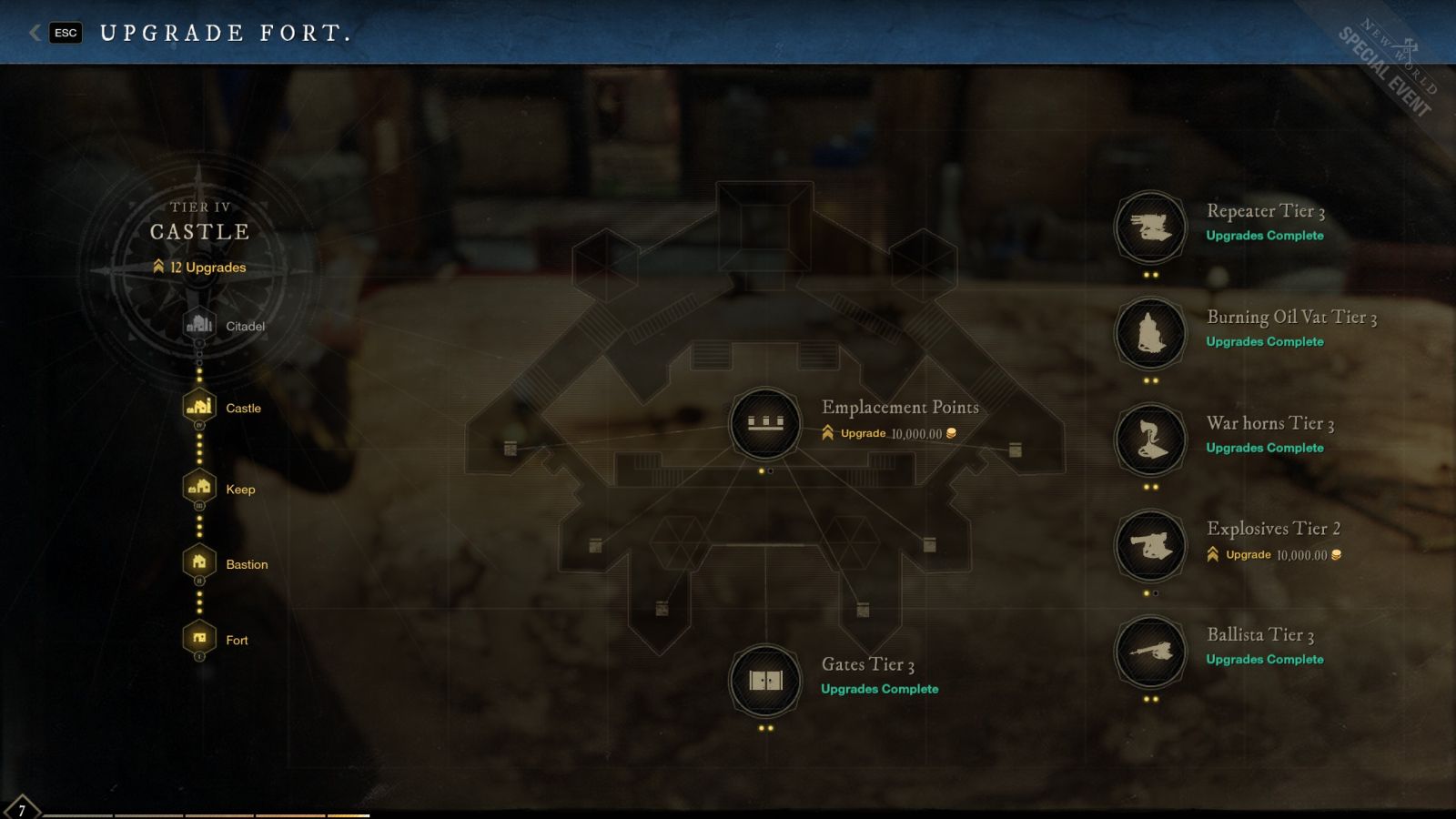 I’m running pretty eye-watering hardware to be sure, but the Lumberyard engine that Amazon has used for this game runs extraordinarily well. During any given scene I was getting roughly 150fps at 1440p. Bumping to 4K saw that only drop into the low 100s, even when there was all sorts of chaos on the screen. It’ll be interesting to see how the game scales onto other hardware, but that’s a story for another day. Suffice it to say, the team has optimized the game quite well as we head into the final month of production. 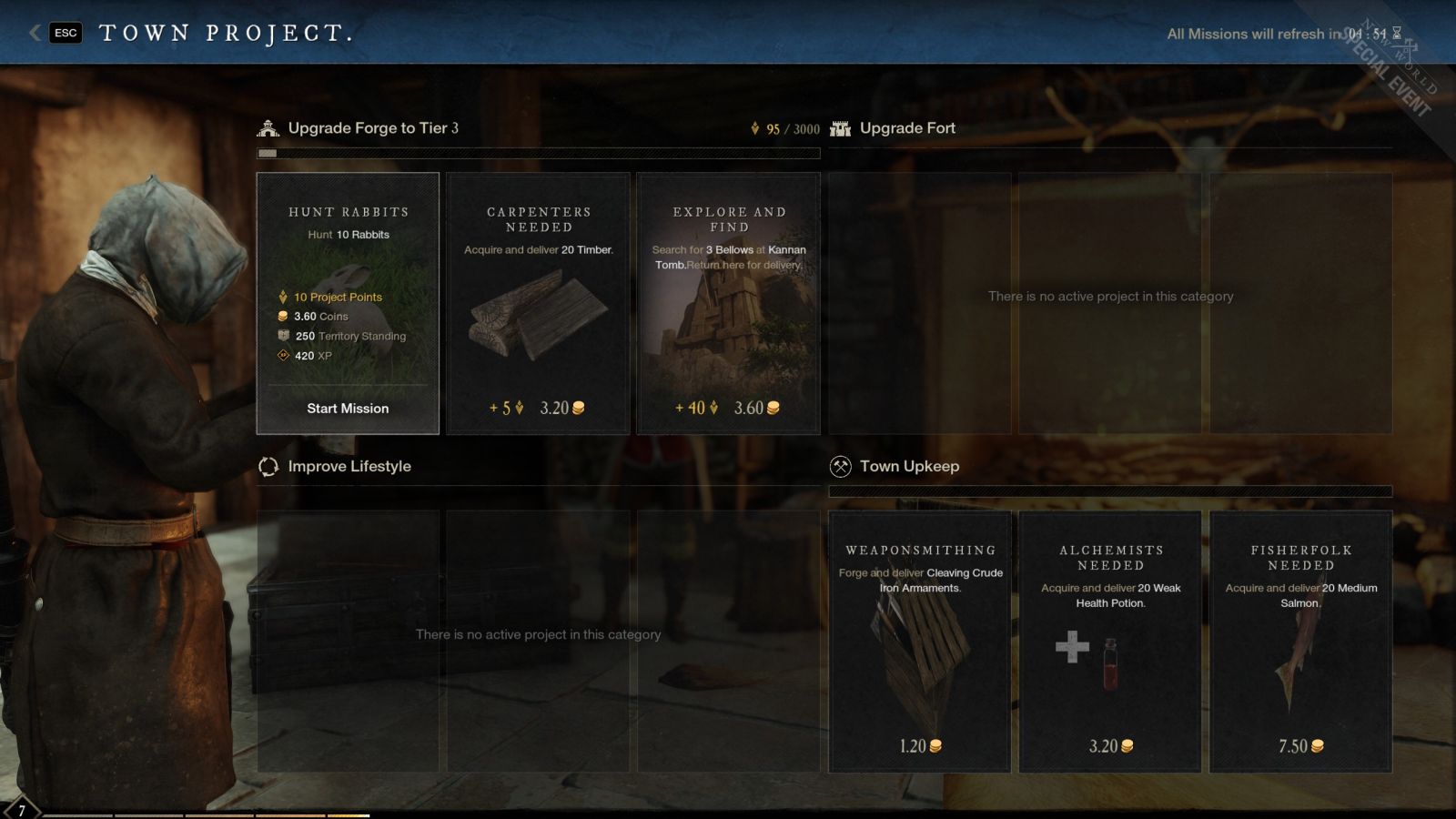 Our first day of adventure saw us running a few missions at our first frontier destination, but so much more lies ahead. It’s impossible to even begin to encapsulate the expansive world Double Helix and Amazon Games have created, but it did manage to tick the most important box — it was a whole lot of fun, and I couldn’t wait to play more. With improved PvE content and more time to nail endgame content, I was eager to get my hands on it. Check out our endgame preview right here, complete with fresh video goodness delivered straight to your eyeballs.

See you on Aeternum Island soon!