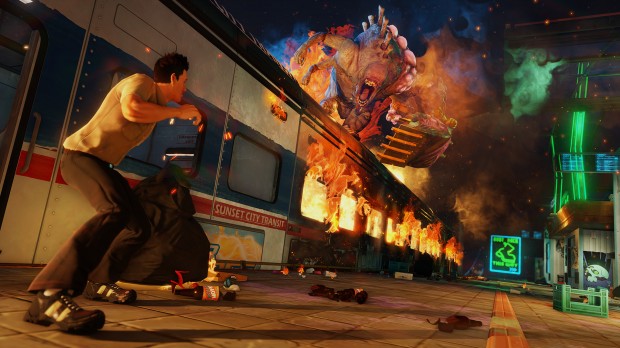 The E3 demo we saw for Sunset Overdrive absolutely blew our minds.  We nominated it for Best Graphics, Best New IP, Best Action Game, and Best Sandbox, taking away wins for the last two.

But you can’t really judge a sandbox game with a pre-scripted E3 demo – you need to wrest the controller away from the PR handlers and go explore for yourself. Well, I got the chance to do exactly that, and I’m happy to report that our first impressions were the right ones.

It’s called a Herker, and it wants to punch you in the face. Repeatedly.

The team turned me loose with a near-final version of the game, with no instructions beyond “have fun!”, so I set off to do exactly that. Kicking off with selecting from four body types – slim or buxom female, ripped or steroid freak dude, I snapped up one of the 18 face types to go with it. Stacking a massive two-toned fauxhawk from the three pages of hairstyle, and snapping on a porn-or-cop-quality mustache, I set foot into the eye-poppingly odd world of Sunset Overdrive.

As I step off the subway I’m immediately attacked by horrible monsters that look like they are as much orange puss as they are somewhat human. Barely making it into my apartment I slam the door and grab a beer to steady my nerves. The game flashes back three hours where things were a little more normal. Maybe too normal. Maybe pathetically normal.

Pushing a trash can through the amped crowd of energy drink giant Fizzco’s product release party, we grudgingly perform our janitorial duty. As the DJ whips the crowd into a frenzy, the company throws out their newest energy drink, Overdrive. Furious chugging doesn’t lead to sugar crashes and regretful headaches, instead resulting in horrible mutation and orange pustules. With the city’s residents turned into horrible amped zombies, there is only one thing left to do – enjoy every minute of it!

Hi Walter! Thanks for saving our ass!

17 days later, when our home is overrun with zombies (we were almost out of beer anyway), we escape and set to grinding on the electrical and phone wires, because…why not? Quickly we are in over our heads, but Walter––the master of badass entrances––jumps in to save our ass. Throwing us a gun that looks strangely like a dick and balls called the “Flaming Compensator”, it’s time to enjoy the chaotic playground.  Here’s a quick snippet of what that looks like in motion:

Locomotion in Sunset Overdrive is an easy blend of Jet Grind Radio, Tony Hawk Pro Skater, and inFamous, but vastly improved over all of them. An odd character named Two-Hat Jack in the game makes, to use his parlance, “unbelievable shit” such as the Dirty Harry, Acid Sprinkler, Freeze Bomb, High Fidelity, and others. The weapons are cobbled together disasterpieces. For instance, High Fidelity is a makeshift board with LP records stuck in it. As cool and goofy as the weapons are, it’s the amps that make them special.

Amps come courtesy of the resident Mixologist of Sunset City – Floyd. You see, Floyd wants to experiment on you with a strange cocktail called “Amps” that provide special powers. What’s the catch? They are 100% powered by, you guessed it – STYLE! That means using the crazy locomotion system, staying in motion, using your crowbar to drop underneath, meleeing passers-by, and anything else you can do to spruce up your combo. Epic level 1 and 2 may power your weapons, 3 brings “Epics”, but 4 is “Bat shit crazy!” levels of power. These amps may add damage to your dodge roll, make your bullets into taser rounds, or even set people on fire with your melee – just try not to think too much about ingesting experimental stuff from the stranger you just met.

Be careful when Floyd is mixing the cocktails…

These amps take a little bit to cook, and you’ll be collecting the parts to mix them. Popping Fizzy Balloons, collecting smelly shoes, snagging neon signs, or even picking up rolls of toilet paper for their “catalytic substrates” provide you the raw materials to create amps with names like “Bear Force One”, “Bounce-Splosion”, and “Fired”. I’ll leave it to you to discover what these do.

There were quite a few parts in this game that had me in stitches, but one part stood out above the rest––fast travel and respawn. Each time you die you get a different respawn animation. At one point an alien ship dropped me off in little chunks that re-assembled, another time I dropped in like The Doctor in a huge blue phone booth, and better than that was the time I stumbled out of a porta-potty like I had spent the evening on a wicked bender. Fast travel is similar, with the main character drinking until he or she falls into unconsciousness, only to wake up (usually in a compromising way) at your target destination.

While we only had a short while with the game, the world seems to be enormous. There are several factions to contend with, four rather large areas, phone booths that connect us to other players for cooperative play (complete with rewards that carry from multiplayer to singleplayer), weapon combining a-la Dead Rising 3, over 50 challenges, 40 story-building smartphones to find, and much more.

Before long I glanced at my phone (because who wears a watch anymore?) and noticed that several hours had evaporated into thin air already. Open world games aren’t exactly new, but somehow Insomniac Games has made them fresh again. Their comedic stylings, and the combination of quite a few awesome gameplay mechanics should make for an awesome sandbox to explore.

You can grind electrical lines and beat down orange energy drink-filled zombies on October 28th, exclusively on Xbox One.