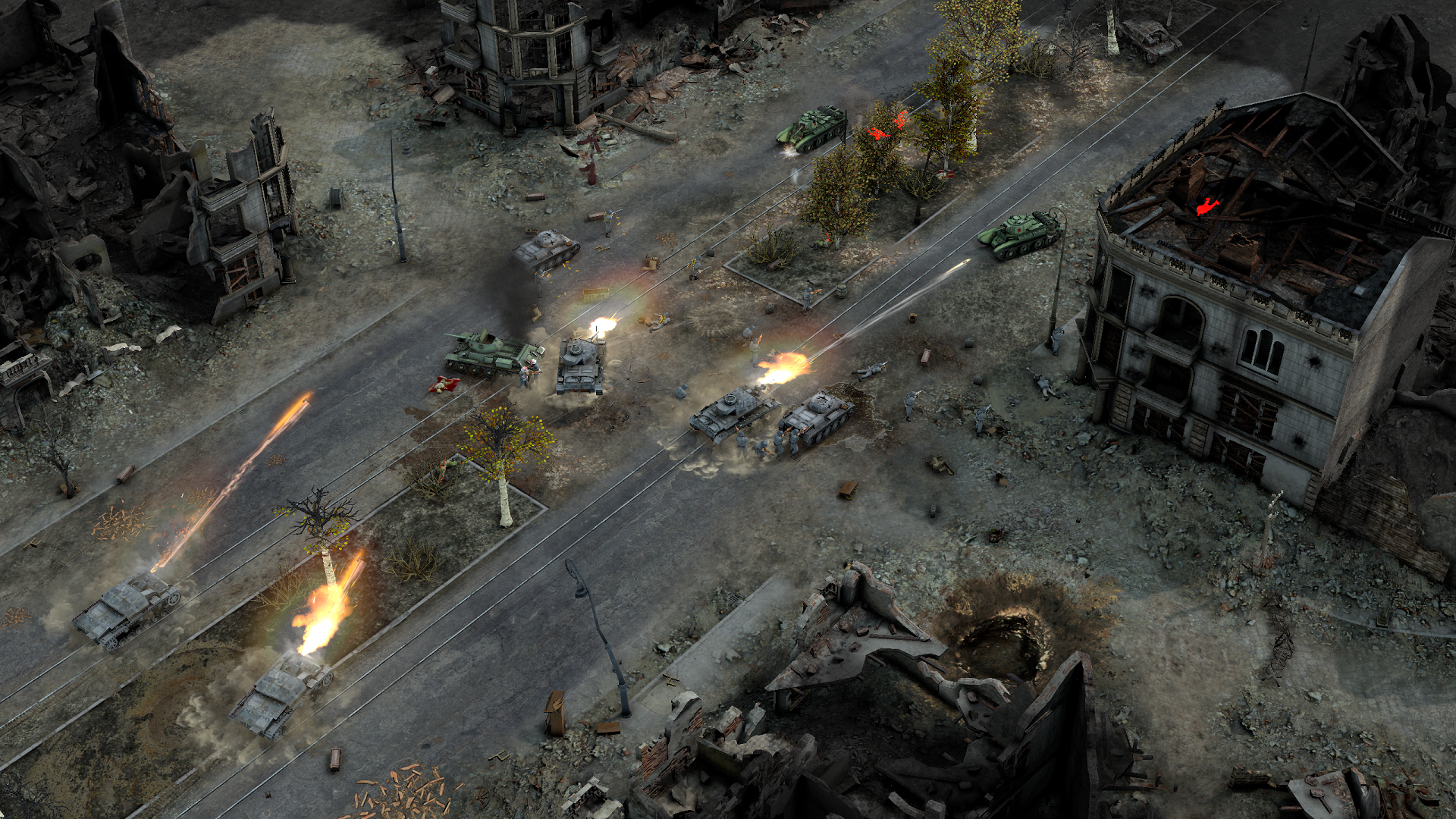 I didn’t think I’d ever be writing this. 2008 saw the release of Sudden Strike 3, but it wasn’t received well, having been criticized for terrible pathfinding and squandered potential. Since then, I figured the series was dead, rotting away in an IP graveyard of sorts. You can imagine my surprise then, when Kalypso Media and Kite Games announced Sudden Strike 4.

The presenter telling us about the newly revived WWII RTS admitted that he’d been trying to take Stalingrad as the Germans for the better part of a week—unsuccessfully. He advised us that playing the Allied mission was a more sensible introduction to the RTS as it contained a bit more hand-holding; whereas the German scenario showcased more of the unforgiving nature that is so characteristic of the series (and of war in general). However, the presenter also challenged us to make it to the mission’s final objective, the Volga River, before the session was over. Challenge accepted, I thought, and to hell with the hand-holding.

In case your WWII history is a bit hazy, the Battle of Stalingrad is considered one of the bloodiest and costliest battles of the entire war. Kite Games has done well portraying this. Street fighting is nasty stuff, and it showed. Stalingrad looked fantastically ragged, desolate and demolished. Frequently I found myself panning around the map for no other reason than to revel in the beautiful destruction, if there is such a thing. Dark lighting and great weather effects added to the environment even further.

The Soviets rained fire from bombed out buildings, ambushed me around corners, laid anti-tank mines, and led my tanks into narrow streets guarded by anti-tank emplacements. In Stalingrad, you fight for every inch. You advance, your sight greatly hampered by the fog of war, straight into a Soviet kill box, pulling back as fast as possible after sustaining some losses. After regrouping, you must set about trying to find a flanking route with which you can eliminate the emplacements, tanks, and troops guarding your approach. It turns out the Soviets thought of that too—you’ll have to push through their flank as well.

The realism of Sudden Strike 4 is impressive, from the units all the way down to the historically accurate structures. Detailed unit management, commandeering enemy equipment, and shrewd tactics like flanking, laying proper ambushes, and smart utilization of indirect fire are absolutely necessary. There’s no base building, so with the exception of sporadic scripts that send in limited reinforcements, what you start with is about all you’ll ever have in a given mission. And even though you’ve generally got a repair truck and a medic or two, both troops and tanks rarely regain full health after sustaining damage or injuries. Supplies are important as well; all vehicles and troops have limited ammunition and/or fuel which must be monitored and replenished using supply trucks. Having plenty of units is great, but they’re useless in combat when they’re out of ammunition. It’s as much a war (or a game, in this case) of attrition as it is one of situational awareness and tactical maneuvering.

There are, however, a few important things that need tweaking, as well as a few additions that I’d like to see.

Unit selection needs some fine tuning. At times it felt as though my boxes weren’t grabbing all the units within them, so then I’d overextend and grab more than I wanted. German soldiers blended into the debris of Stalingrad remarkably well, which, while still a wonderful nod to realism, became annoying when I noticed I’d inadvertently left two or three troops behind. I also would’ve appreciated a method to resupply and repair all of the units in an area, instead of doing this one at a time. Perhaps I could simply drag a box over some units and my repair or resupply trucks would service anything in that designated area.

The biggest issue I noticed with Sudden Strike 4, is with movement and formations. In a game that so heartily emphasizes the employment of realistic strategies by making victory so dependent on them, it seems strange not to have a system whereby you can move or deploy units in a formation of your own choosing. If I’m advancing, I want my infantry supported by mechanized units, and I want my tanks with the toughest frontal armor at the head of the formation, infantry in the rear, and so forth. I should be able to assign a formation of my own design to a selected group and advance them in said formation while adjusting for terrain changes or whatever else comes my way. Being able to see not just a unit’s directional facing, but also its field of fire when placing it, in much the same way Company of Heroes did, would be immensely helpful too. The lack of these essential features would seem very much at odds with a game that encourages its players to be the next Patton or the next Desert Fox.

To be fair, Sudden Strike 4 was only just announced. Even in a pre-alpha state, it was still immensely enjoyable and very functional. Considering it’s slated to release Q2 of 2017, there’s plenty of time for Kite Games to work out the kinks. This game has loads of potential, especially with Steam Workshop modding integration on PC. Based upon what I’ve seen thus far, I’d expect Sudden Strike 4 to live up to its name and go toe-to-toe with the best of the genre. This is an RTS to keep your eyes on, and perhaps even one to be reckoned with.