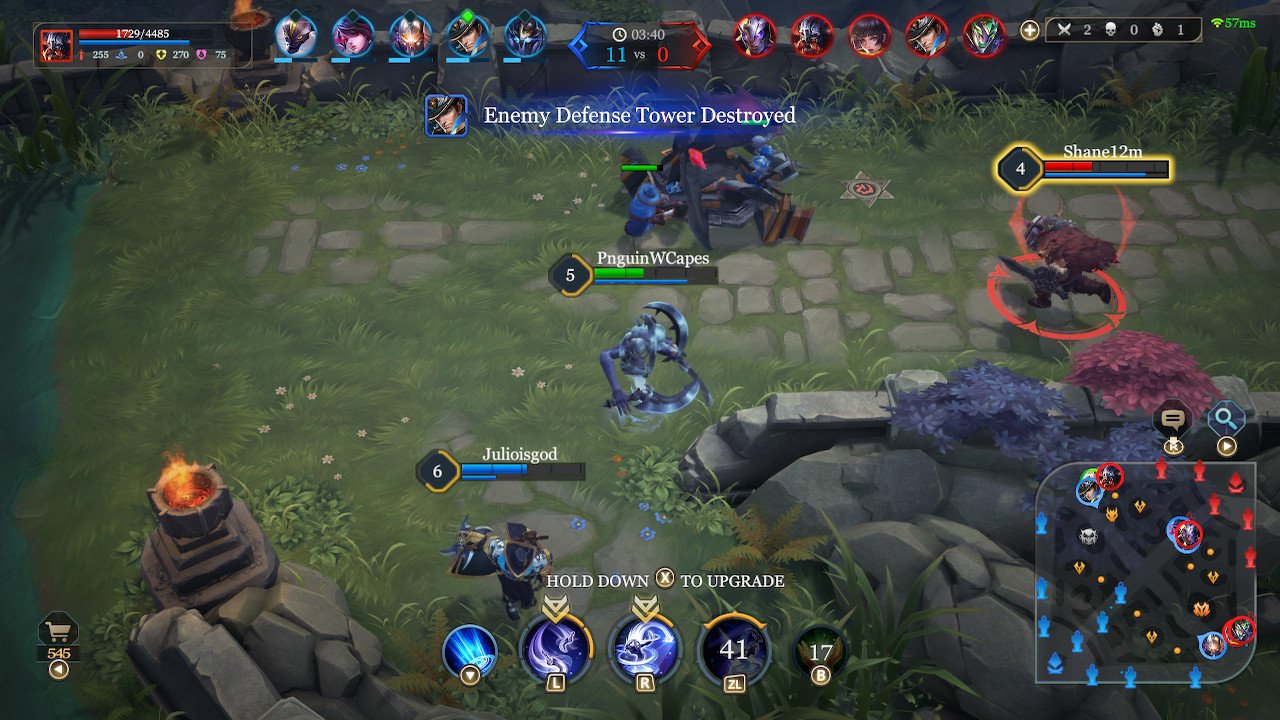 I’ve never gotten into the MOBA genre, but to be fair I’ve never really tried. Games such as League of Legends and DOTA 2 have been interesting to me from a distance, but I was always too intimidated to try them out. The long match times, complexity of the gameplay systems, slow pace, and PC-centric design kept me away. However, Tencent’s mobile MOBA (try saying that ten times fast) Arena of Valor hopes to offer a more casual, “pick up and play” take on the genre; one that should be a perfect introduction for those of us who haven’t gotten bit by the bug just yet. While it has existed on smart devices for some time now, garnering quite a following in the process, Arena of Valor is making the jump over to Nintendo Switch. I was lucky enough to participate in the game’s closed beta, and I was hopeful that my time would sway me in favor of these types of games. Did it? Well, yes and no.

For those unaware, the main goal in Arena of Valor is to destroy the opposing team’s core. Depending on the game mode, either two teams of five or three face off in a symmetrical arena and fight towards said core. The map is divided into three lanes, and each land is barricaded by gun-mounted towers that’ll attempt to impede your progress. However, each team has a constantly spawning force of minions that’ll continuously forge ahead towards the enemy. They’ll even stop to draw tower fire, thus allowing you and your teammates to destroy the towers, making forward progress towards the enemy core. The issue, of course, is that the opposing team is doing the same to your towers, gunning for your core. As such, multitasking is a key component in Arena of Valor.

Each match becomes a sort of give and take as you push ahead through enemy towers while also keeping a fixed eye on enemy movement to insure that they aren’t mounting a surprise attack. The ebb and flow of strategy helped keep me engaged, especially because the actual combat can be less than thrilling at times. Destroying a tower or core is as basic as allowing minions to take the brunt of a tower’s attack, while spamming all available moves of your own to slowly whittle down the tower’s health. Minions and random mobs in the jungle (the center of the map) require even less thought to take down, as they rarely even attempt to put up a fight. Player versus player combat does fare better, but even mileage on this front varies.

In Arena of Valor, you have a standard attack mapped to A, and then a series of moves on cooldowns, mapped to various shoulder buttons. As such, this leads the combat to feeling rather stiff, and focused more on cooldown-management than actual mechanical skill. While this is an established aspect of the genre, and lends itself very well to slower, more methodical encounters, considering Arena of Valor is designed to be faster paced, I do think that a quicker battle system would suit the game rather well. However, while the larger engagements of three or more players often boiled down to visually-muddy, spam-heavy affairs, smaller skirmishes became tactical bouts of cat-and-mouse. I very much enjoyed the latter instances of combat, and going on long undefeated sprees felt incredibly rewarding.

Success in combat ties into one of the most interesting aspects of Arena of Valor, which is the fact that each character (of which there are many to choose from, ranging from tanks, to warriors, to support characters) begins the match at level one. As you defeat opponents and progress throughout the match, you gain experience and gold. The former levels up your character and unlocks new cooldowns (later upgrading those techniques when your hotbar is full) and the latter can be used to purchase new equipment. I appreciated this added system, as it made each match more dynamic. Each match grew and evolved from start to finish, thus keeping every individual encounter exciting, because the opposition might have new moves to try and best me with, but I might have new attacks as well. It is a very well implemented mechanic.

Likewise, matches tend to stay fresh due to their relatively short duration. My longest match was just about 20 minutes, which might seem ludicrous until you discover that a typical League of Legends match can be, at minimum, twice as long. However, I still found the matches just a hair lengthy. By fifteen minutes, I was just about ready for the round to be over. What’s peculiar is that Arena of Valor has a timer that counts up from 0:00, seemingly just to keep track of the match length. The game also keeps track of points, based on kills and towers destroyed. However, the match only ends when the core is destroyed; regardless of score. Why not cap the round at, say, fifteen minutes and have two different ways to win? Either your team can destroy the enemy core for an automatic victory, or simply accrue the most points in fifteen minutes. That would be a better match structure from my perspective. But, to maintain the purest experience, this could even be an optional mode, which would satisfy both the casual and hardcore MOBA fan.

While I enjoyed my time with the Arena of Valor closed beta, the issue remains that I’m just not that big a fan of the MOBA genre. From the single map to the combat, these are staples of this genre that simply didn’t appeal all that much to me. Arena of Valor was a nice jumping in point, and I can see myself downloading the full game to dabble in from time to time, but it did not do all that much to fully convert me into a fan of this game type. The core tenants of MOBAs are presented in an easy to digest format, but if those tenants don’t particularly speak to you, you probably won’t spend all that much time with the game. For those of you with an established interest in MOBAs, this will be a great addition to your library, based on my time with the closed beta. It is a faster, trimmed-down version of the experience that is sure to please, but probably won’t draw many players away from titles such as League of Legends due to that simplicity. For the rest of us, Arena of Valor is a good place to test the waters, but likely will not convert you to a full-blown MOBA player. For more on Arena of Valor, stay tuned to Gaming Trend.