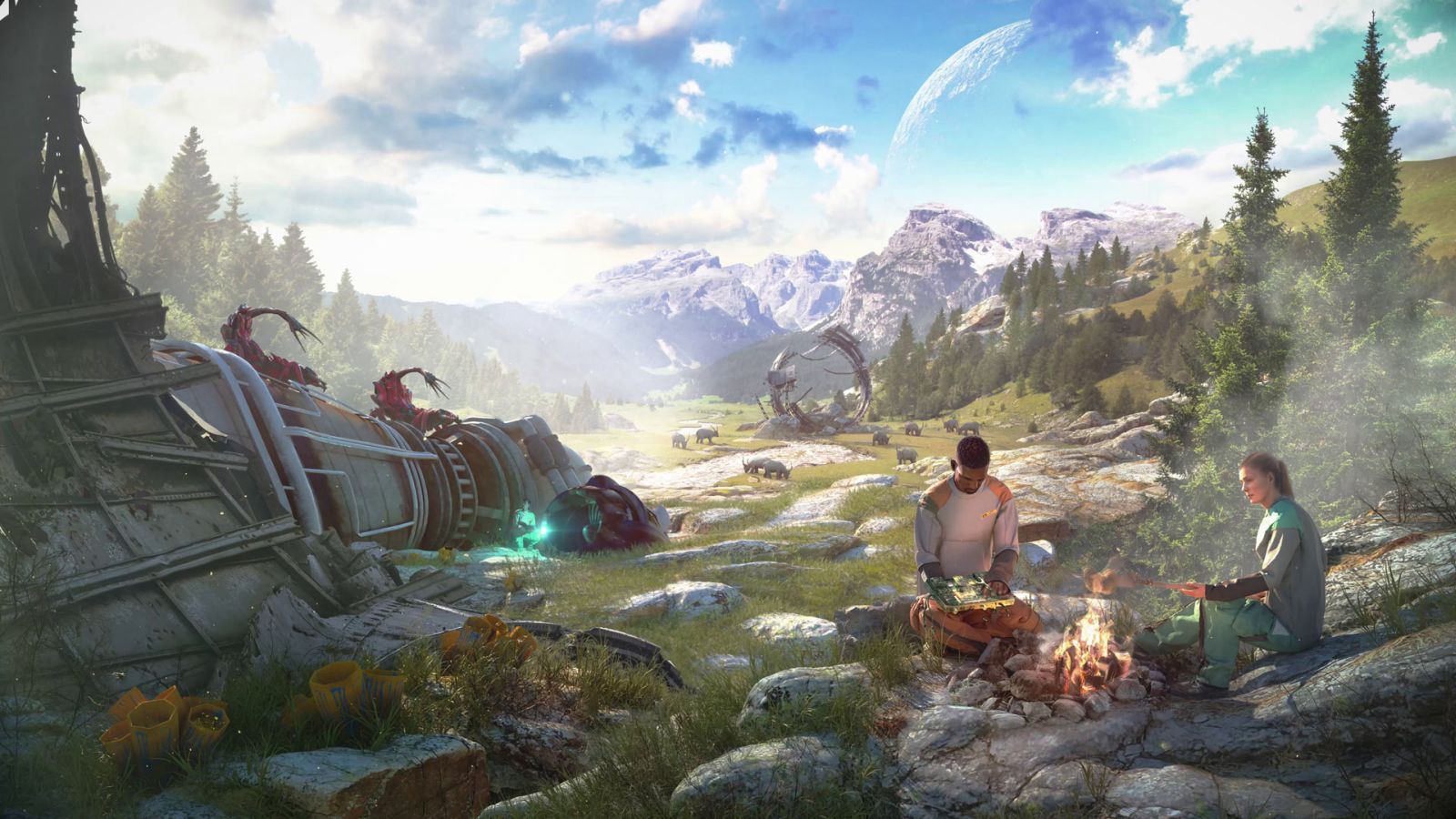 I’ve been taking my time with Stranded: Alien Dawn. For a game that just moved into Early Access, it’s packed to the absolute brim with content. Developer Haemimont Games (of Surviving Mars, Tropico 3-5, Imperium Romanum, Victor Vran, and many others) has a new game, and it’s a huge departure from their usual grand strategy fare. Stranded: Alien Dawn is a base building game, but with a heavy dose of survival simulation. Adding elements of environmental danger, creatures that will eat you like a snack, and resource contention that can lead to your death creates a world that is far more RimWorld than it is Tropico. While we are far from final release, is this a shift for the better? Let’s see if we can live long enough to find out.

First I need to praise Haemimont Games for their inclusion of a full onboarding tutorial system to get new players spun up for the adventure. Going over basics like camera movement, creating a basic base, and researching new technologies, all the way through setting up defenses, controlling your environment with things like light and temperature controls, and even how to build electrical grids. Your survivors are not the heartiest of meat puppets, and keeping them alive is a real challenge. Each one of these takes about 10 minutes to complete, meaning there’s literally an hour of mechanics to learn and master if you want to survive, but broken into bite sized chunks. It’s rare to see this in Early Access, so props to the team. 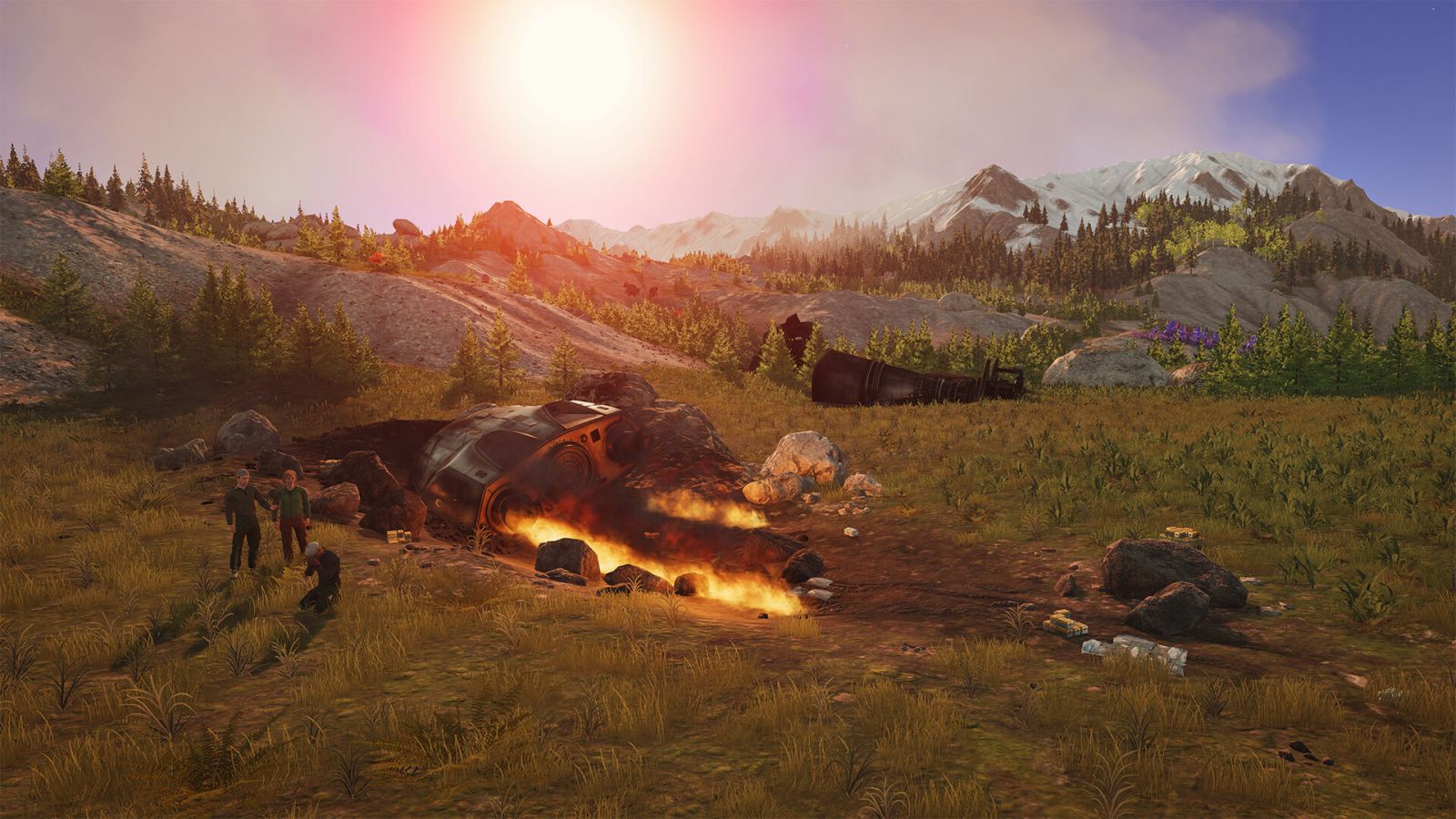 Picking from a list of over 20 survivors, you’ll decide which four adventurers will be joining you on this adventure. Unfortunately that adventure starts with a forced ejection by your team, sending the crew hurtling towards an unknown planet with little more than emergency rations, and the scrap of the ship they crashed. Ripping it apart would yield enough metal to create your first steps towards stability, but there are plenty of things on this planet eager to turn you into a soft and squishy meal. Before we get to your new chompy buddies, let’s talk about base management.

Your survivors come with their own backstory, along with a handful of traits and skills. Their traits are often things like “Calming” which means they’ll try to calm other characters regardless of their opinion on the other person, “Compassionate” meaning they’ll make others happy by cheering them up, and “Slowpoke” which conveys that their speed is reduced by 25%. These pair with a stack of eight skills that more directly impact this person’s overall happiness and survivability. 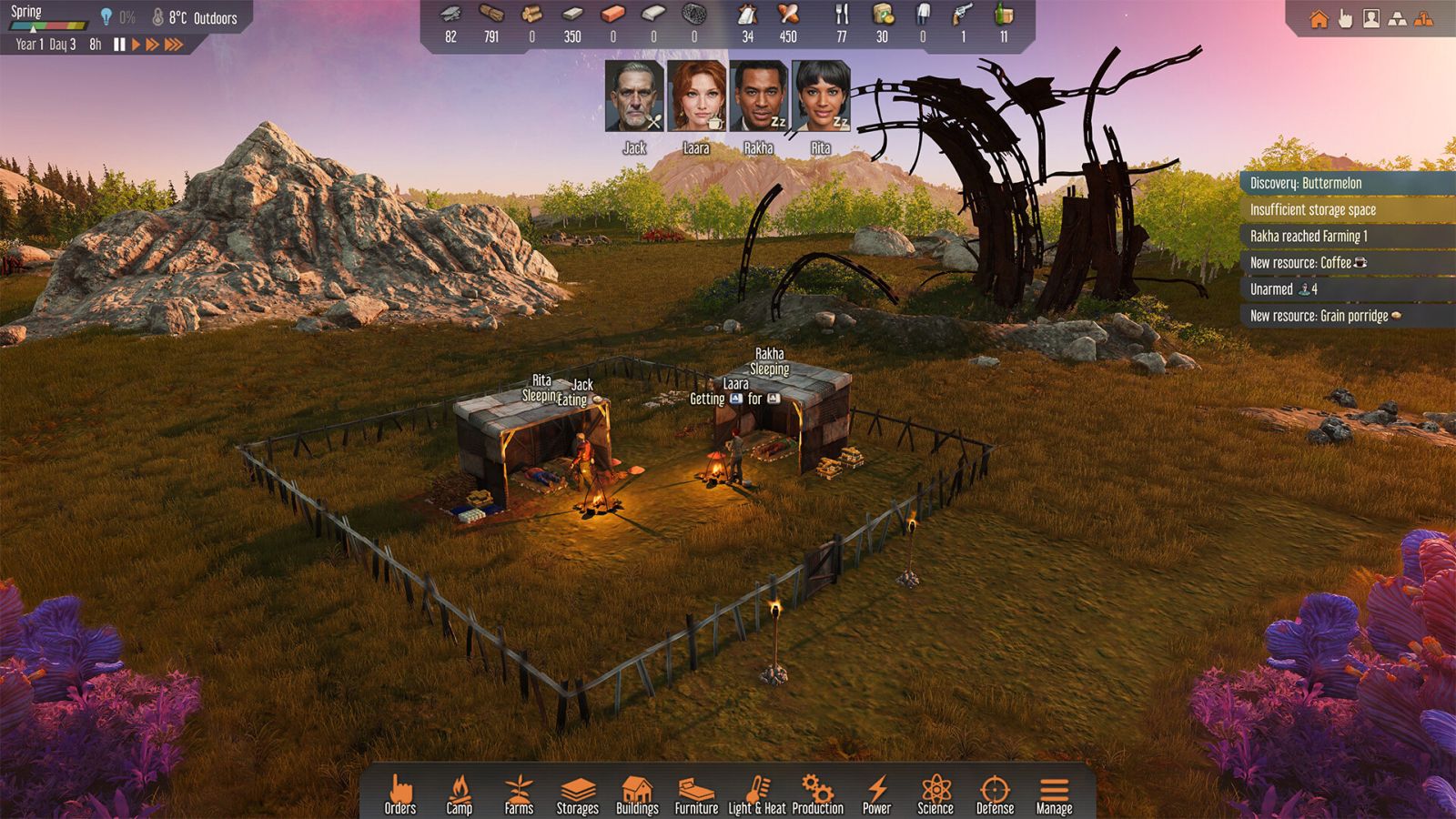 The skills are Combat, Construction, Cooking, Crafting, Farming, Healing, Intellect, and Physical. In order, Combat is their prowess with fighting, including their speed and chance to hit. Next up is Construction which, as the name suggests, is their prowess with construction which directly impacts both speed and quality of the end result. It also gatekeeps whether they know how to build more complex structures. Cooking is this character’s ability to turn strange and foreign things into tasty and nourishing food. Like Construction, it also affects the end result, with a skilled cook being less likely to overcook food. Crafting has to do with the capacity to create complex consumables and equipment. Farming is all about putting things in the ground and getting something better coming back from it without losing your crop in the process. Intellect is the survivor’s overall smarts, affecting their ability to research new things and quickly. Finally we have Physical which is Scavenging, Mining, and Cutting, which is important to things like logging, breaking rocks, and disassembling that crashed ship. Beyond these skills is also a character’s preference, designated either as interested or indifferent. This designates a preference, and aligning a person’s work with their preference is likely to produce a better end result. You also have one other state — incapable. This means that this character will not perform this task under any circumstances. With a mix of folks at your disposal, your adventure begins.

As the game hits early access there is only one scenario, one region, and one moon, though there are three difficulty modifiers to tinker with your starting resources. The current scenario is a bit of a sandbox with the primary goal being to survive. Like any good survival game, though, you’ll want to figure out how to optimize the experience to not only live, but thrive. Before you can do that, however, perhaps simply putting a roof over your head and having a bit of thatch to rest on. Observing plants and alien structures around us lets us get at least a rudimentary understanding of their purpose. Some strange orange mushrooms can be ground into a healing poultice. Similarly, some tube growths make for a good syrup substitute. Everything in this world is equal parts alien and familiar, meaning you’ll need to venture out to learn the lay of the land. 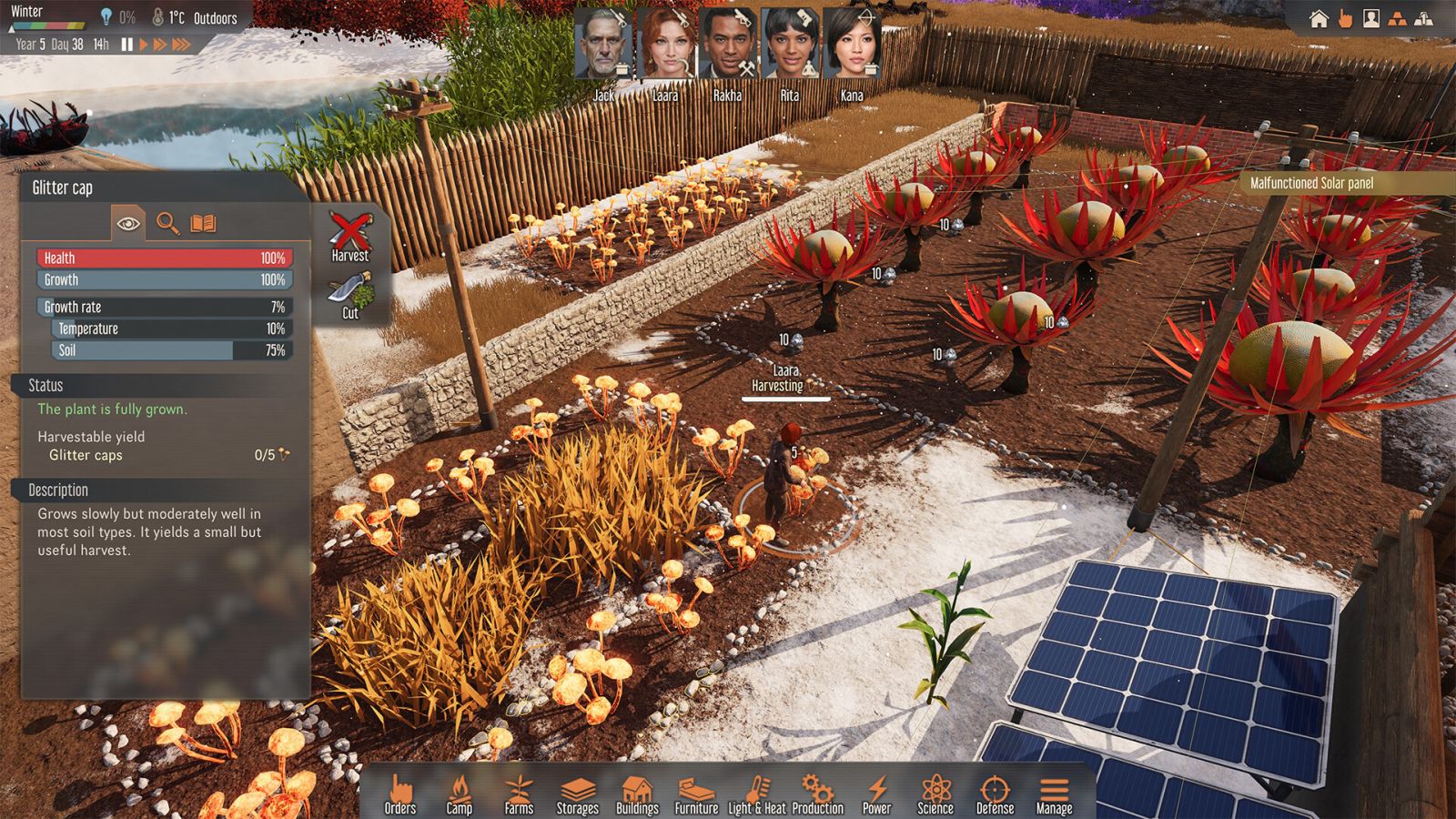 Eventually the bluster of your construction will attract the local fauna. Some creatures are fairly docile, and can be farmed for meat easily enough. Others might be a touch more aggressive.
Especially in survival games, every stick, rock, and piece of metal matters, and you can’t afford to be wasting anything. Stranded is always showing you ways for you to optimize your camp. Even doing something simple as placing a fence in a stone wall has your survivors reclaim bits of construction materials they can recycle and use for other things. Since most creatures will probe and attack the vulnerable points in your defenses, namely your walls, you can use those resources to create chokepoints, complete with traps and defensive weapons. Bear traps, spikes, towers, and even flamethrowers will help keep the more bitey creatures of this world at bay. When Shriekers come calling, you’ll probably need something stronger, and that’s where things like flamethrowers come in. We’ll come back to defensive structures later, but suffice it to say the game is all about ensuring your people stay one step ahead using traps, chokepoints, and automated defensive structures – when you can afford them.

Once you’ve managed to keep your plot of land mostly defended, it’s time to start fortifying for the harsher elements. As this mysterious planet cools, you’ll need to ensure you’ve got a proper roof over your head. More than just slapping up four walls and a roof, you’ll want to optimize your space to ensure you can heat it, defend it, and otherwise make it a home. The traits of your survivors may have them prefer to stay with others in a single room structure, others might resent this and eventually want their own room within the structure. Come winter time, you might need to worry about the fact that you made your structure out of scrap steel – a poor insulator. Your people will also need to go outside, so it’d be wise to invest in appropriate clothing. 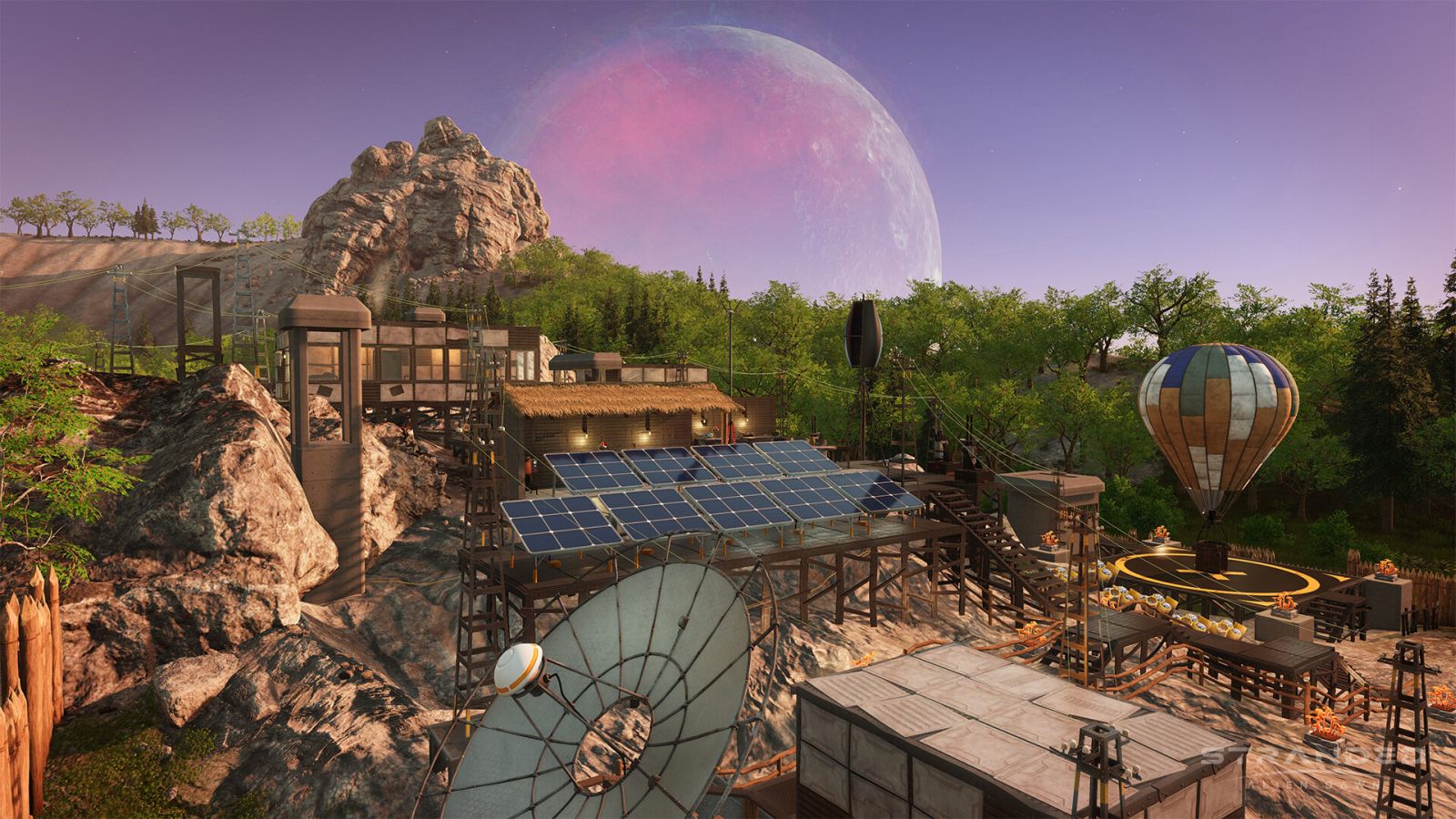 If you thought keeping four people happy was a challenge, now your attention has to turn to your resources. It turns out, some resources require cold to stay usable (e.g. animal fat can stay usable indefinitely when frozen), where others require warmth to be viable (e.g. cooked meat and grain porridge). Where you store your resources becomes very important. As I’ve said – you have nothing extra to go to waste, so having it rot on the ground is ill advised. It also contributes heavily to how fast things are constructed – common sense says keep your food near the thing that cooks said food, and keep your construction materials near the place where those objects will be built.

Once you’ve got a grasp of the basics of building, protecting, heating, and optimizing, it’s time to try to thrive in this hostile world. This means getting power rolling for your society. Solar, wind, generators, and power cells to store your energy excess make up a power grid to power additional defensive devices like automated turrets and motion sensors, as well as things like air conditioners, freezers, and electric stoves. Setting up motion sensor triggers for specific things, building in automation for not only weapons, but also to keep your burgeoning camp humming along efficiently — I was surprised at just how many options are available already.

One thing that Stranded does extraordinarily well is deliver visually. The game is beautiful, with gorgeous flora and fauna. The world may look simple at first, but the further you reach out from your landing area the more variety you’ll see. The buildings you create look great, despite being modular – that’s rare. I’m amazed at just how good farming looks. The fact that it works so well is a fantastic bonus. 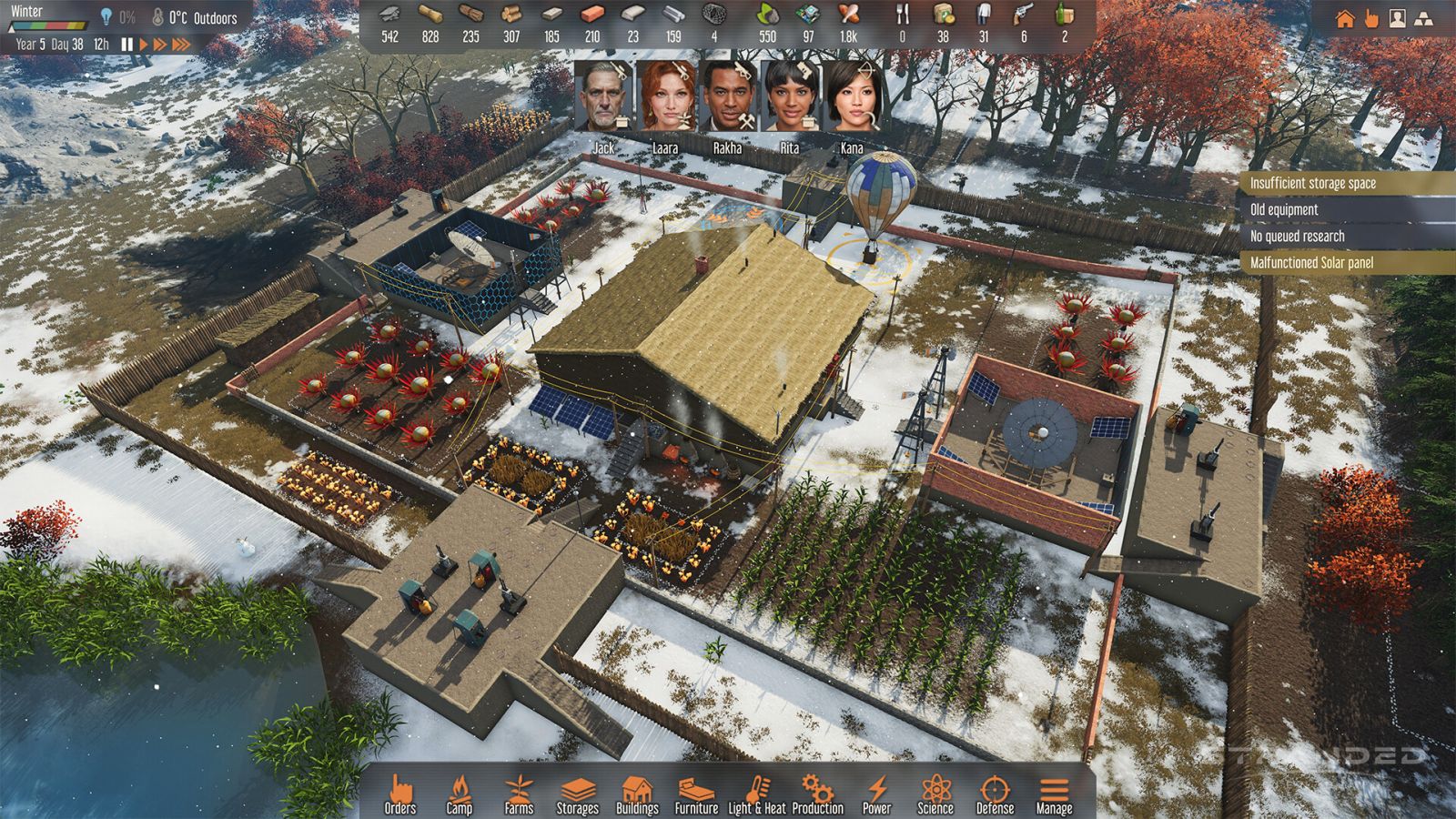 There are a few hitches one would expect out of a freshly-launched Early Access title. The AI can use some work, making strange choices at times. I’ve had one prioritize restocking the fridge than helping a person who was actively fighting off hordes of incoming bugs. I mean, I get it, good food is hard to come by, but your compadre is in the middle of combat! When the bugs did arrive, my idiot brigade fled right past all the weapons stored on the storage racks, running half way across the planet’s surface before I managed to draft them back to the weapons to dispatch the little buggers. Once we did kill them, they just all layed down and “waited for treatment”. I’m not sure who they expected to show up, but they were sound asleep next to the med kits…these people are doomed.

Joking aside, my first drop was an abject failure. Two survivors bled to death as we ran out of med kits, and after that it was just a slow descent towards inevitable doom. My second drop, however, was far more successful. It’s that randomness ensures that Stranded: Alien Dawn is launching into Early Access in a good place. The core gameplay loop is fun, and there are already a lot of variables to tweak to change the way the game plays. Every drop already feels a little bit different, and that’s a solid foundation for the game. If you dig games like Rimworld, Oxygen Not Included, or other survival simulators, Stranded: Alien Dawn just might be your new favorite thing.