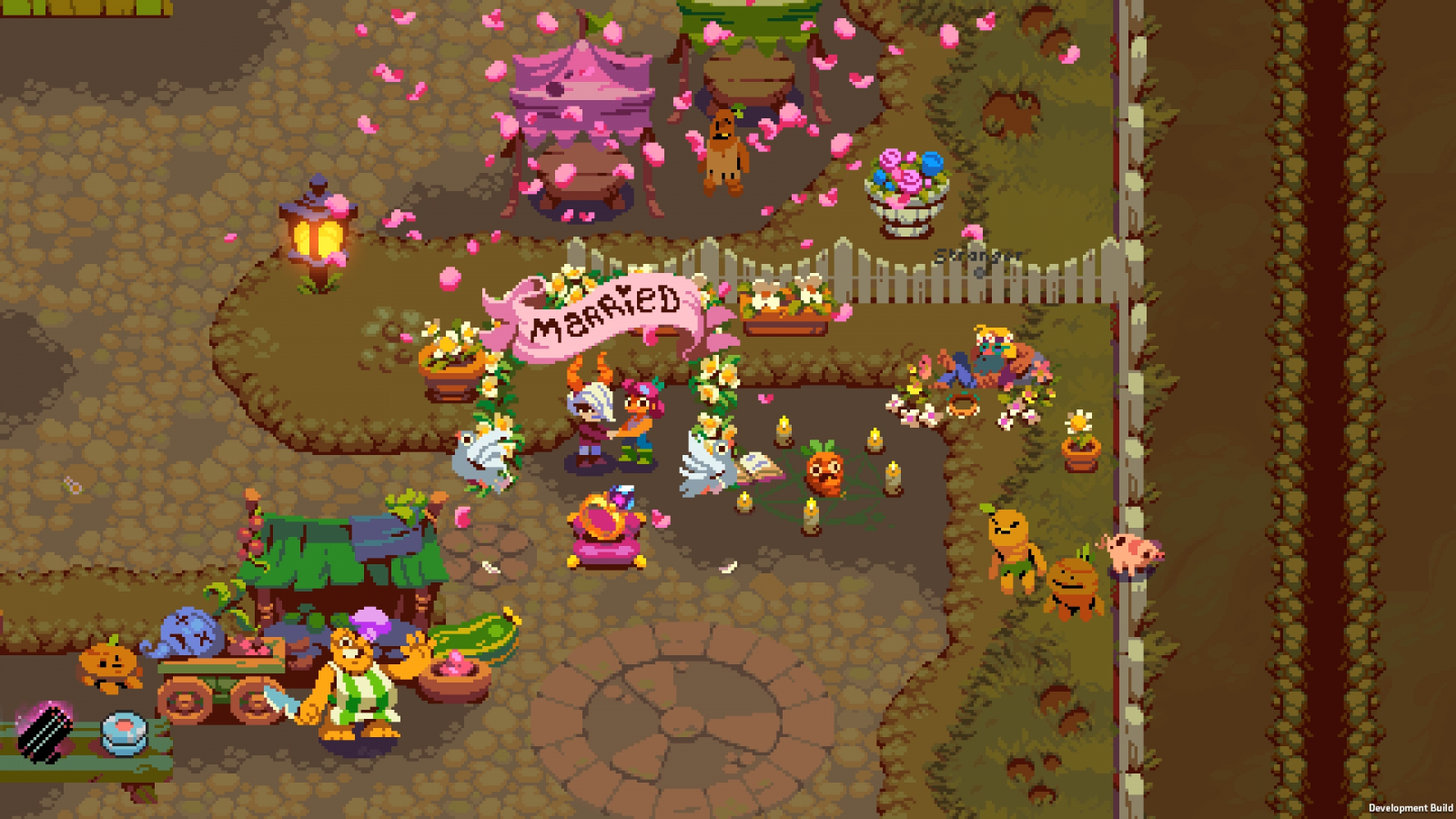 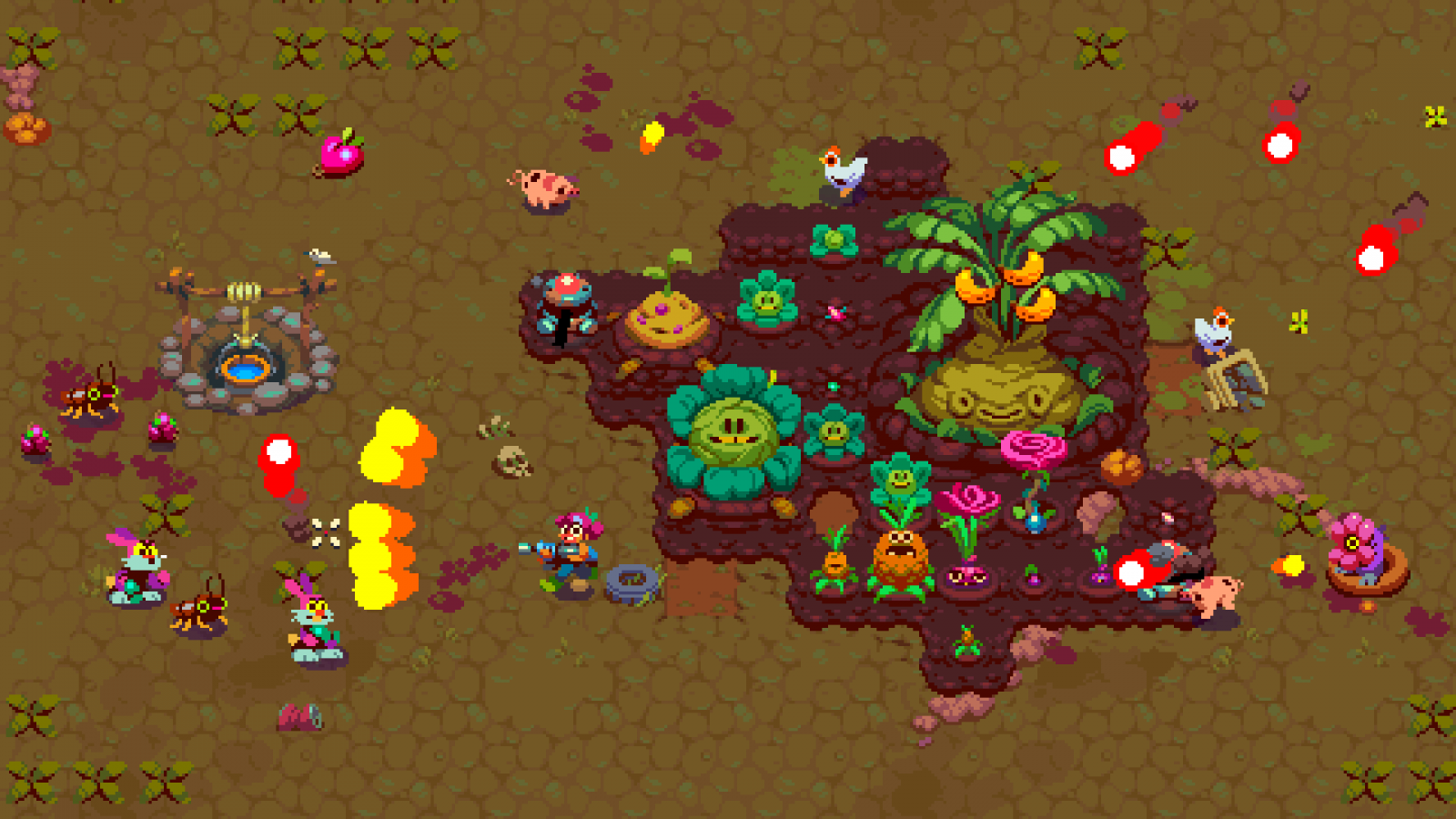 At first, everything is overwhelming. You start the day at your crops where you plant your first seeds. Then, you’re off to explore with just a mediocre gun and a lot of guts. The surrounding areas are randomly generated and contain different biomes which features different enemy types. In each area you’ll find camps that require clearing to receive a prize. These prizes range from new synergies, helpful animals for your farms such as bees or pigs, and a map that can be used to reveal the golden chest for the area, which also contains a useful item. 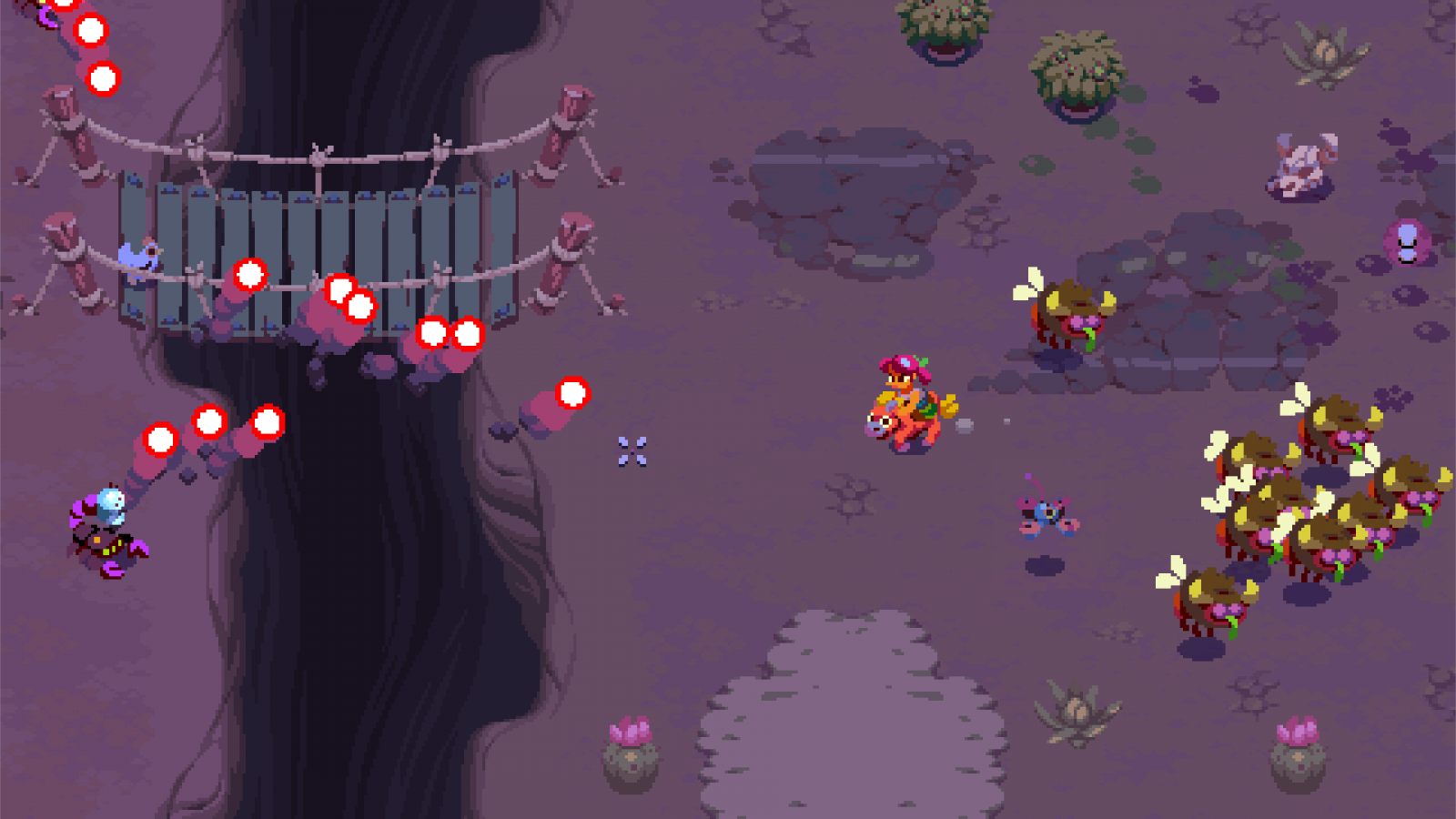 But the day doesn’t last long. Once dusk strikes, you have about 15 seconds to get to your crops before they’re under attack by the surrounding creatures. Here, you have to fight the waves of enemies while watering and harvesting your crops. This is easily the most stressful part of the day, but the game eases you into it enough where it isn’t overwhelming by the time you’ve reached this point. Once you’ve survived, you take your pay for all of the crops you managed to harvest.

After each day, you head back to a hub where you can buy a better gun for the next day (it breaks after one day), buy health, upgrades, and more. These change each day, and the end of the season, which is every three days, gives players an additional bonus: their harvest total is rated and they can get a better item as a reward. 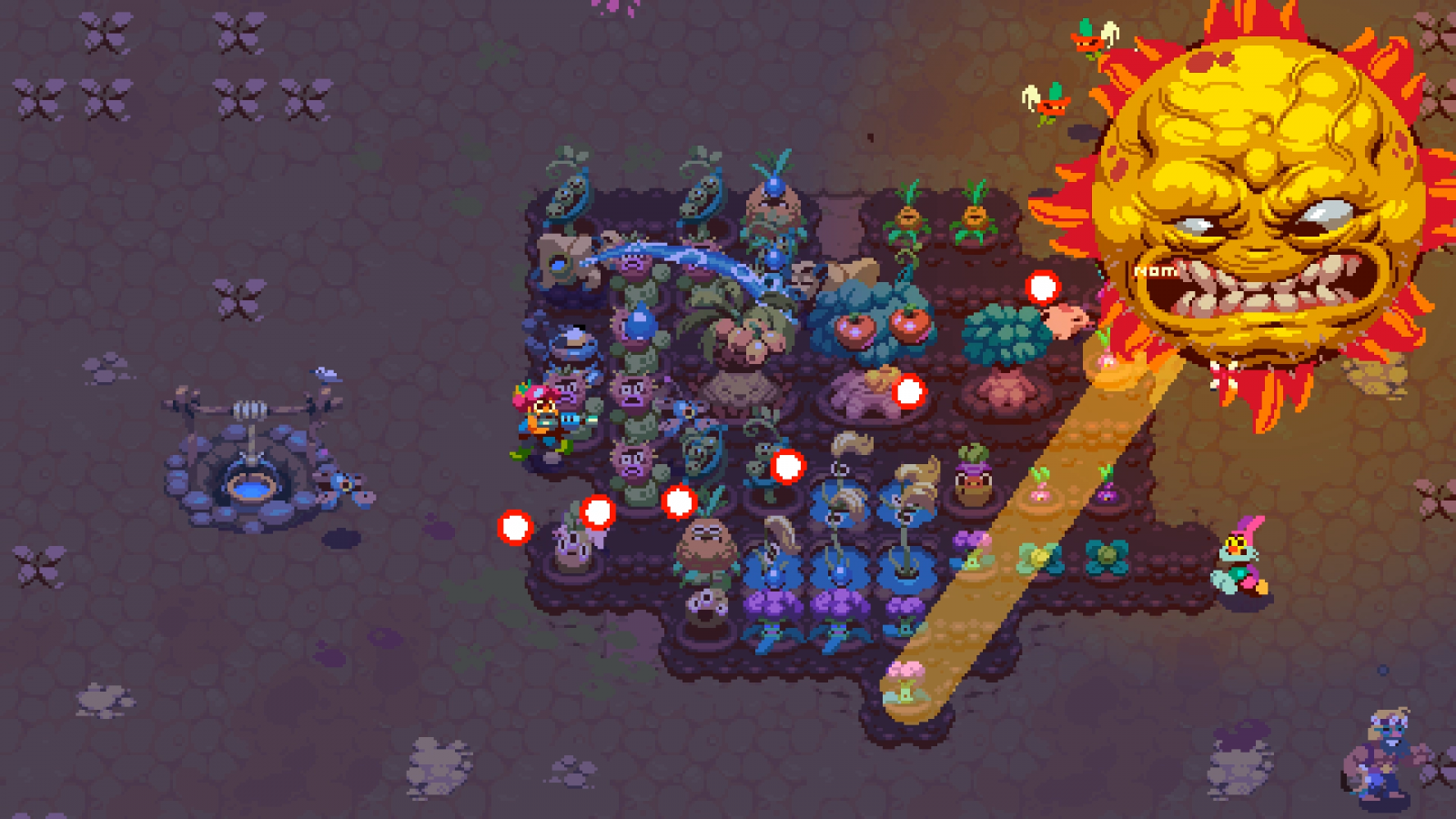 But the end of the season doesn’t mean you can relax just yet; you’re also going to encounter a boss fight. The most memorable boss I fought was the sun. When you fight the sun, he’ll often try to set your crops on fire, which will kill them if the fires aren’t put out within a few seconds. This creates a game of micromanaging, bullet dodging, and shooting for the moon by taking on the sun.

The town in between days also gives you the opportunity to open paths to explore more. You can purchase bridges with your hard-earned money that’ll let you explore more areas in hopes of finding even better seeds. It’s the sort of risk-reward idea of “do you want a better gun, or better seeds?” A harder day may lead itself to a better reward. 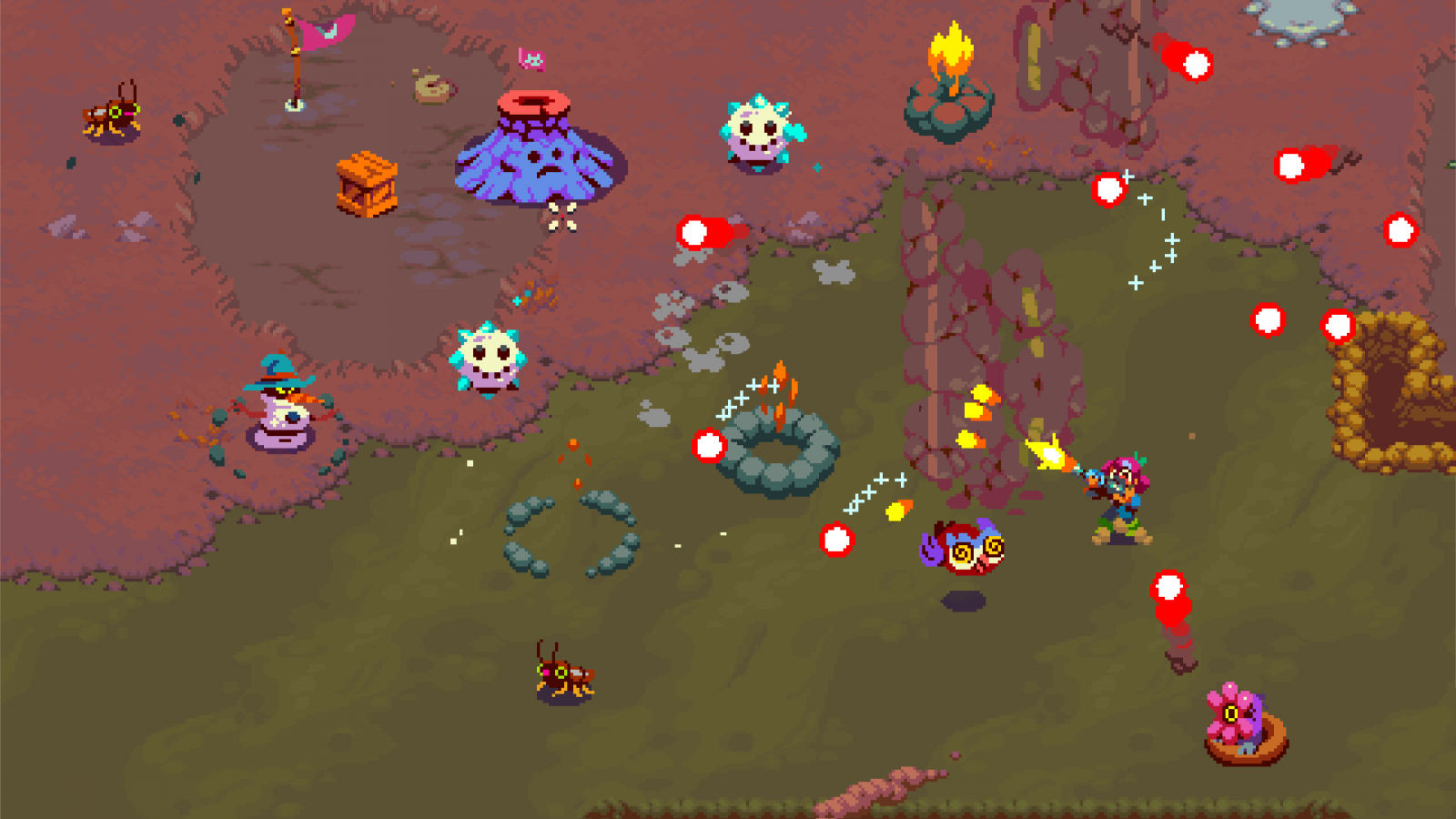 The game is considered “won” after the five seasons, Spring, Summer, Autumn, Winter, and Nuclear Winter, but the team is considering adding “years” that’ll increase the game’s difficulty the more you win.

Atomicrops is already shaping up to be a not only addicting, but an incredibly fun roguelike title. It will be released later this year on PC.