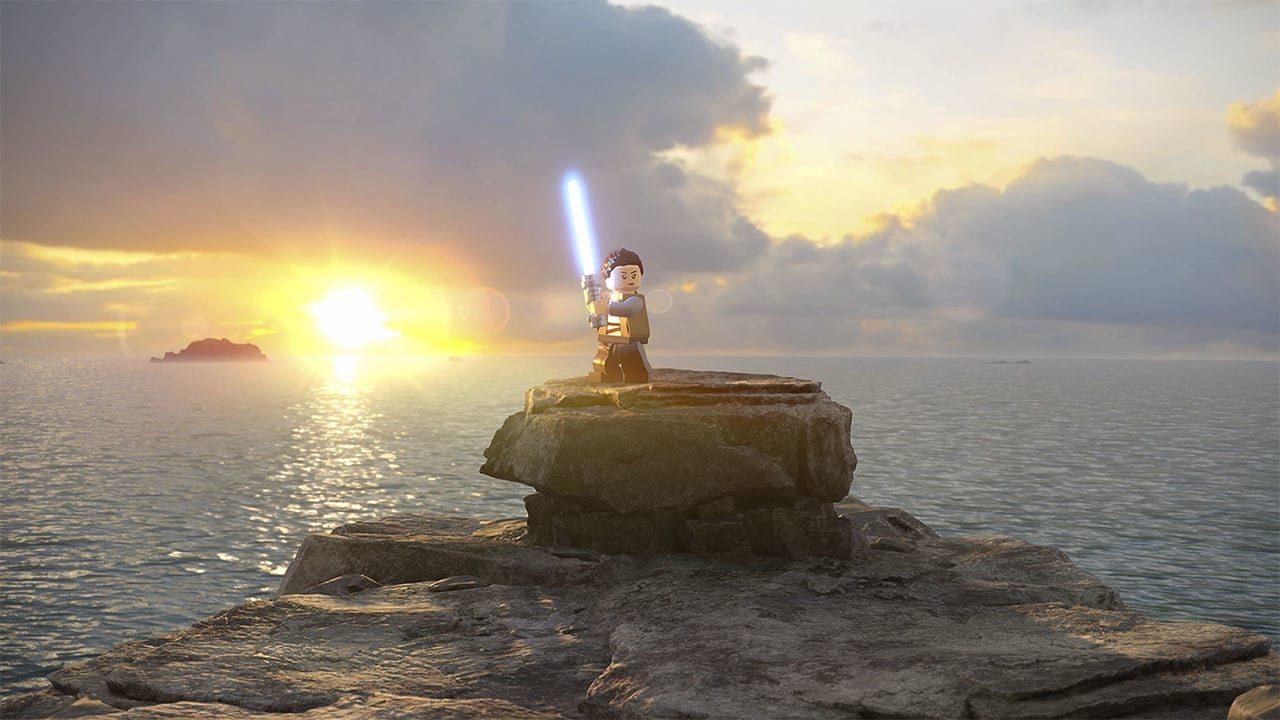 For as long as I can remember I have had an affinity towards Star Wars. My entire workspace (and most of my living room) is full of graded comics, pop figures, signed photos, numbered cards, and countless other items. Being of the gaming fandom as well, I’ve also played quite a few of the Star Wars games from Lucasarts, EA, and more. I’ve played great games such as Knights of the Old Republic (and KOTOR II), Episode I: Podracer, Battlefront II, Republic Commando, and Shadows of the Empire. And I’ve played some… interesting …entries such as Bombad Racing, Star Wars: Masters of Teräs Käsi, and Jar-Jar’s Journey Adventure Book. One of the major standouts starting in March of 2005, however, were the LEGO Star Wars games. I remember playing most of these games with a family member or a friend (always picking Anakin or Chewbacca if available). These games were always such a pillar of fun given their knack for funny slapstick humor, nostalgic easter eggs, and more. So when I had the honor to be invited to a Special Preview of LEGO Star Wars: The Skywalker Saga, I was beyond excited.

Starting off with quick words from Community Manager for TT Games, Stephen Bendetti, and Studio Head of TT Games, Michael Denny, we quickly realized how much passion this group has, not just for Star Wars, but also for LEGO Star Wars. They thanked all of their partners for their patience as they made this game what it is today. We were then introduced to Mike Consalvey who was about to give us a prerecorded deep-dive into the new LEGO Star Wars galaxy. I’m going to focus my attention on things brand new to the franchise, things I noticed as a fan of the LEGO Star Wars franchise, and things that were showcased that simply brought a smile to my face; so let’s begin. To start, they’ve put a lot of energy into letting the player play the game the way they want. There is freedom in movie order, fighting mechanics, puzzle solving, and even how long you want to play on each planet. You can choose before every mission to either do the next story mission or explore the area in free roam. We started our preview in A New Hope with Princess Leia and Captain Antilles. Quickly they pointed out the new camera perspective compared to the originals – a more traditional third person angle. This camera perspective allows for easier aiming with gun characters and closer inspection of the backgrounds (which were all made of LEGO bricks, of course). As we continued in the level, they showcased a puzzle in which you could solve it one of two ways. You can either extinguish the fire or blow up the door. Extinguishing the fire allows you to go into a room and activate a “Hero Terminal” which allows you to activate events/new locations by completing a mini-game. When Leia finished the mini-game an airlock opened and all the Stormtroopers (and almost Leia herself) were shot out into space. This really adds to the replayability of each story mission, mostly because I want to know what happens if you just blow up the door and run in guns-a-blazin’.

True Jedi is back again, but in a new way. The True Jedi bar is split into three sections, each giving you a Kyber Brick at the end of the level. What is a Kyber Brick you might ask? Well, Kyber Bricks allow you to unlock abilities for your heroes. These include everything from unlocks for all characters such as speedy sprints to get around the open worlds faster, and individual upgrades to groups such as the Rebellion, Villains, Bounty Hunters, Astromech Droids and more. These Kyber Bricks can be found EVERYWHERE in the world, so taking your time on each planet will be a MUST for those of us who love completing LEGO games. Side missions, puzzles, interacting with the NPC’s or environments all have a chance to reward you with these Kyber Bricks. “Do, or do not, there is no wrong way to collect Kyber Bricks,” as Mike told us. 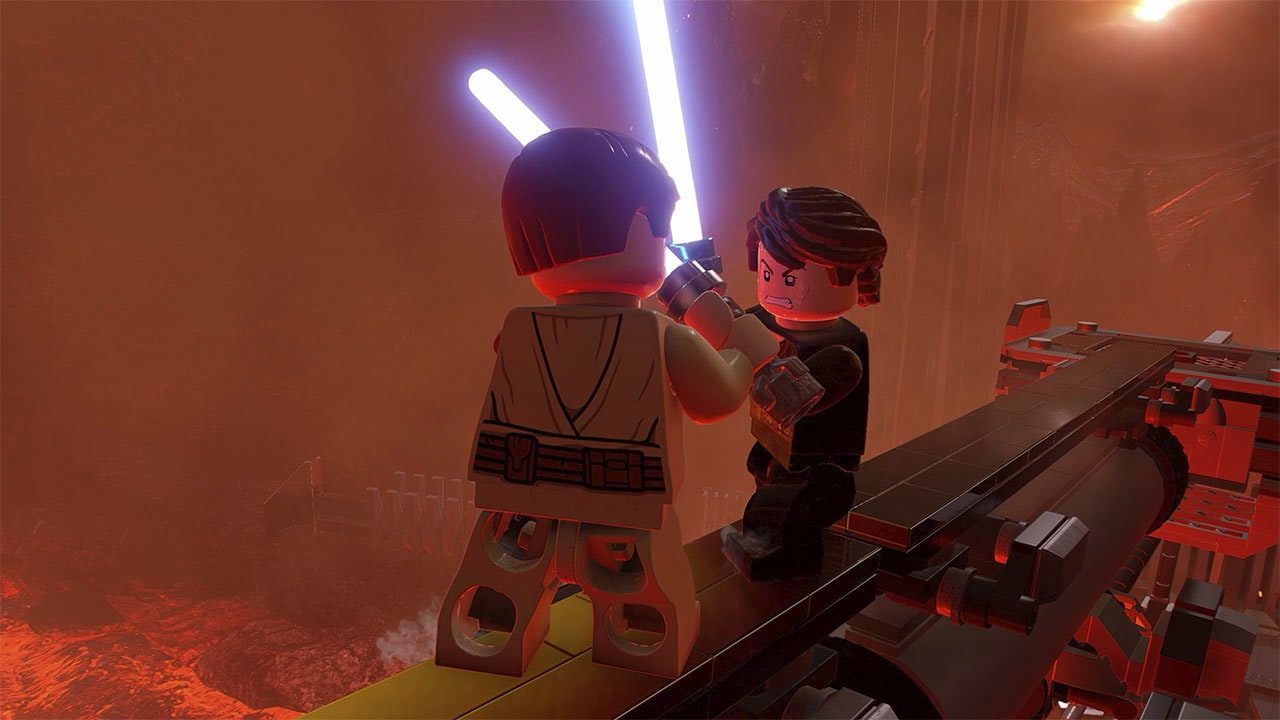 Another staple of the LEGO games as a whole is their use of slapstick humor, nostalgic easter eggs, and so much more during cutscenes. During our time in A New Hope, Revenge of the Sith, and The Last Jedi, there were more jokes than I could count. Some of these included Darth Vader’s Lightsaber getting stuck in a door, Darth Vader throwing a rebel into a window and the rebel slowing squeaking down the side, Anakin ruining a Battle Droid’s retirement party, and Kylo Ren wearing an “I heart Darth Vader” shirt. I am so excited to see more of the humor when we get our hands on the full game.

Some of the biggest reworking has been in the combat and character abilities. Gun heroes such as Princess Leia can aim and knock off Stormtrooper helmets, use the environments to attack the enemy, and more. Gun heroes can also use the environments for cover to avoid taking damage. TT Games has also introduced combos into the game. As the combo numbers grow, the amount of LEGO studs awarded also grows. So get in there and make some cool stuff happen, and get rewarded doing it.

We also saw the battle between Anakin and Count Dooku, which included some quicktime events during transitions in combat. These looked fun and fit in with the mood of the level. Meanwhile, even the droids have gotten a complete rework. They showed scenes with C-3P0 and R2-D2 where you really have to work as a team to get through parts of the game. 3P0 having to build terminals for R2 to hack through, R2 hacking his way into computer systems for bonuses (such as Kyber Bricks), and 3P0 hacking into terminals to use a turret to defeat the Stormtroopers. These upgrades will make playing as droids such as those two feel fresh and new. 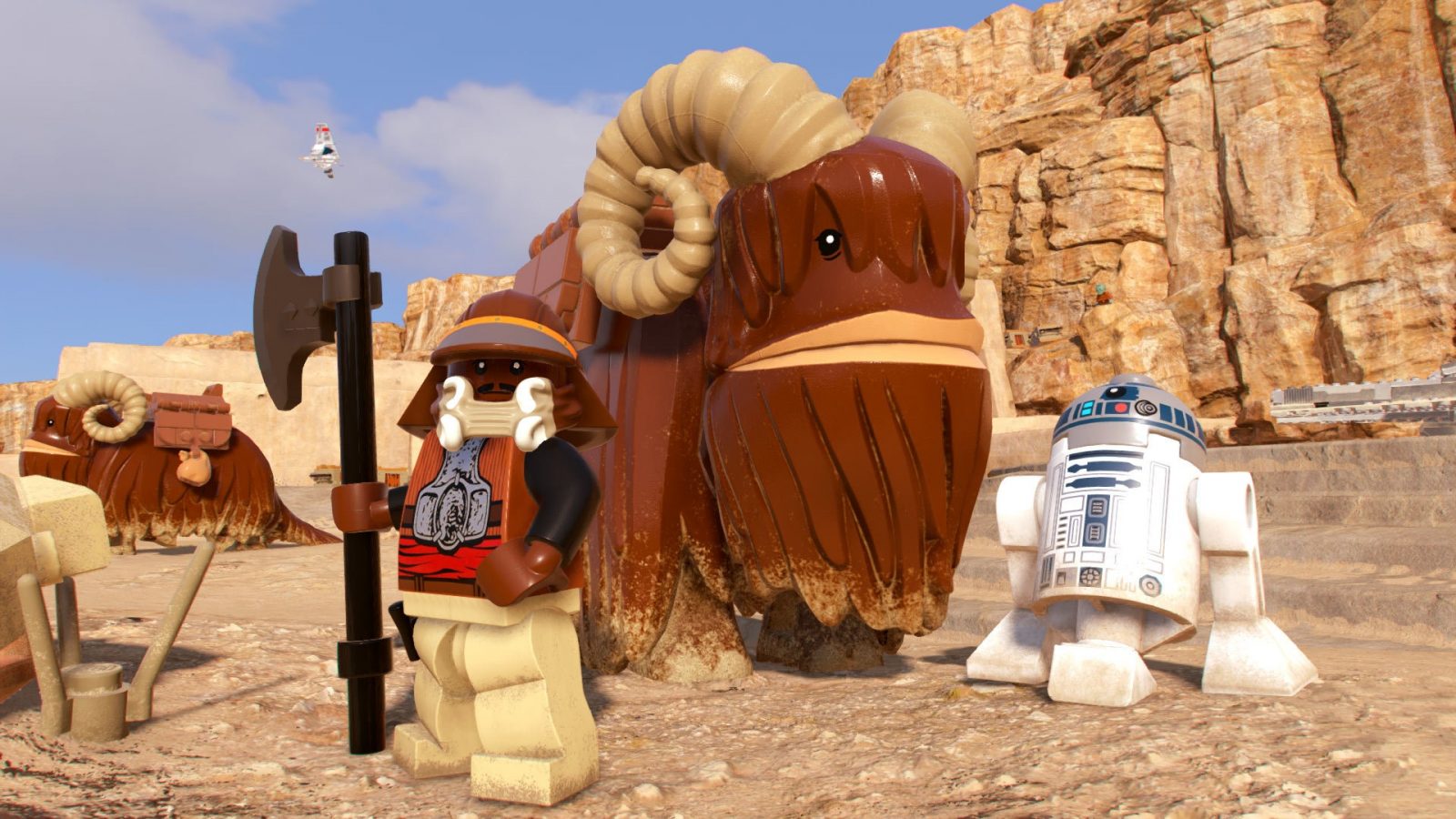 A big upgrade from past LEGO games is the graphics. Everything from the characters to the environments look extremely detailed. I noticed a few times the LEGO emblem on characters such as R2’s arm socket and a resistance trooper’s foot. Another big change was the addition of environmental weathering effects on the character models. While playing as Qui-Gon Jinn on Tatooine, you could see the sand starting to get on his cape, shoes, and arms. We’ve also seen instances of the weathering effects on the icey Hoth (in the trailers) and the jungle of Ajan Kloss. Something that I’m personally excited about are the space battles. First thing’s first, yes, you CAN barrel roll. They showcased both Boba Fett and Luke Skywalker’s ships as we were introduced to smuggling missions. These missions can be collected above planets and have you flying from one planet to another delivering supplies. During these smuggling missions, watch out for the Empire trying to stop you. Your Hyperspace jump will be stopped while you fend off the Empire to get back to the mission. If you lose, you also lose your cargo. Once you finish these smuggling missions you can obtain data discs, which unlock fun extras like the Galaxy Rave. What is the Galaxy Rave? It turns every planet and every location into a non-stop party. Has your dream been to see dancing Taun Tauns? Because you’re in luck.

The roster has never been bigger with over 300 characters, plenty of variants, some of the most iconic ships, and plenty of fun extras such as a playable Rancor to cause maximum chaos. Being a part of the Special Preview of LEGO Star Wars: The Skywalker Saga was an honor and so exciting. It’s such a huge world TT Games has created, and their passion for Star Wars is so very clear on every planet you walk on, every ship you fly, and every Battle Droid you force throw off a ledge. I, personally, can’t wait until LEGO Star Wars: The Skywalker Saga on April 5th.