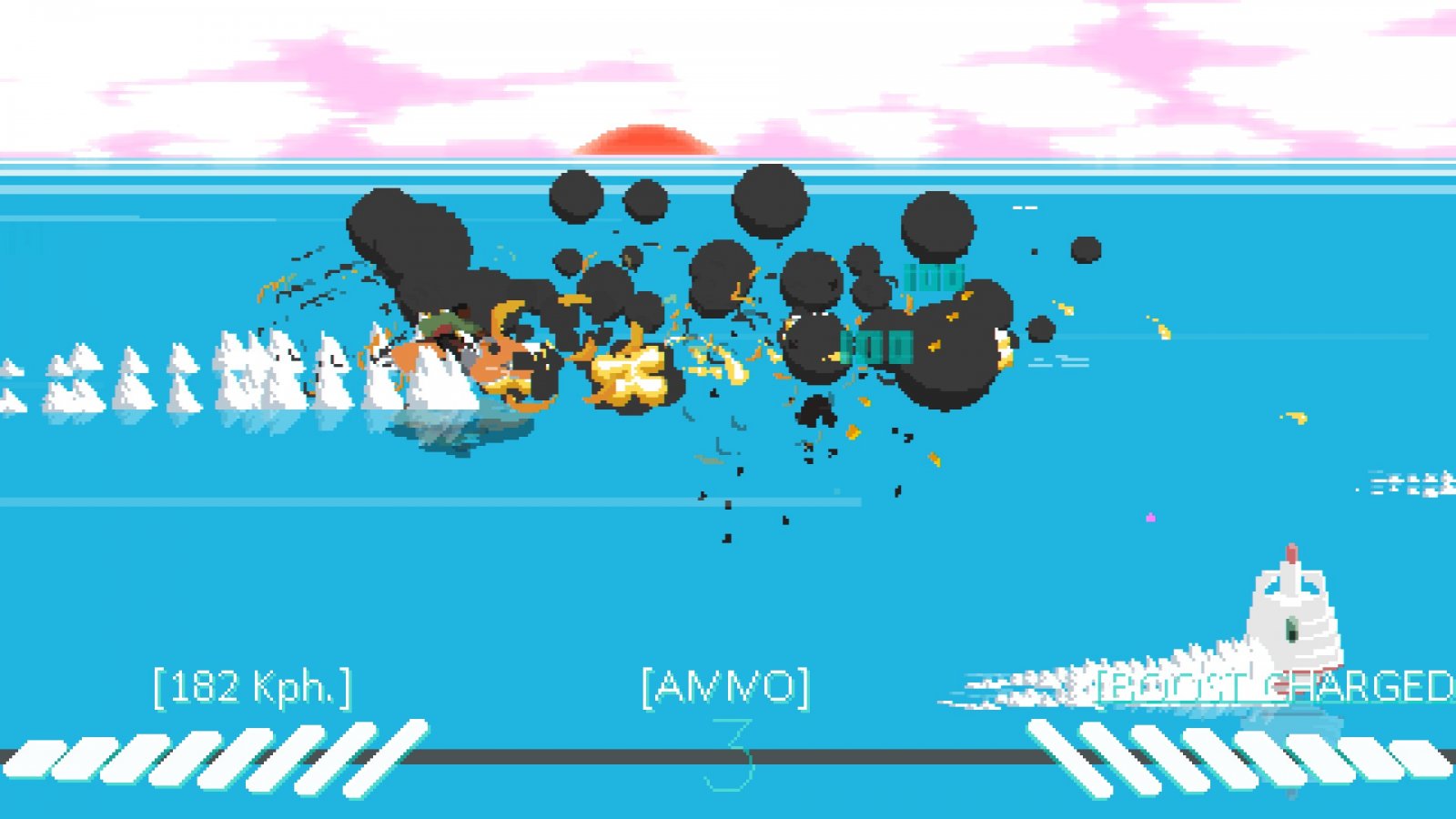 Oscar Brittain, developer of the upcoming racing RPG Desert Child, has said he took inspiration for the game from the anime Cowboy Bebop, Akira, and Redline. If you have even a passing familiarity with those titles, their influence will be obvious within the first seconds of Desert Child. You take on the role of a down-on-his-luck hoverbike racer trying to coax his ride into staying in one piece long enough to earn him a ticket off the boring backwater planet known as Earth.

The races that form Desert Child’s backbone are pretty simple, but do a good job at conveying their breakneck speed. At least in the preview build, there was only ever one opponent in each race and they never posed much of a challenge. You’re equipped with a short but quickly recharged afterburner and a weapon that you choose at the beginning of the game to help you out in each race. Each racetrack is littered with TVs — some that attack you and your opponent, some that explode into collectable cash, and some that serve as power-ups. Boosting into these TVs will grant you extra ammo, while shooting them will fill a portion of your boost gauge, and managing these two resources while smashing as many TVs as possible makes up the bulk of the game’s challenge.

Between races, you’re free to explore your neighborhood, first on Earth, then on Mars. While the racing was fun, the demo really shined in these exploratory bits. As you roam the city’s back alleys, you can grab a bowl of ramen, do some record shopping, or, if you’re feeling sketchy, try to steal parts off other hoverbikes parked around town. The environments you can wander through are packed with visual details and cool secrets to discover. The chance to meander through the docks and market streets of a Martian city was the best part of the demo for me. The setting is just so full of life and odd little details (a cyborg cat here, a perpetually kickflipping skateboarder there) that I spent a good amount of time just circling the city, soaking in its atmosphere. And, if you elect to spend some of your hard-earned cash at the aforementioned record store, you get to listen to some pretty great tunes as you make the rounds.

In a way, the soundtrack seems like it will be one of the most important parts of Desert Child. For one, it’s just not the kind of music you hear often in video games. A big chunk of the soundtrack is made by Oscar Brittain and musicians from his local scene, with a few tracks by Mega Ran for good measure. They all share a similar lo-fi hip hop vibe that really sets the tone for the game. Some tracks will get you pumped for your next race, but some are definite downers, which mirrors the excitement of hoverbike racing and the desperation of scraping money together for your next meal.

When you get tired of loitering (or need to earn the scratch for that meal), you can take on a number of jobs from hunting bounties to herding kangaroos. Every job you take is built around the same racing mechanic with a few added twists. For example, firing your weapon or getting too aggressive with the throttle isn’t recommended if you want to get those ‘roos home safely. You can also find shadier work, like throwing a race for a big payout, but draw too much heat and you’ll have to outrun the space cops, which will likely leave you with a busted bike and an empty wallet. The condition of both your bike and your stomach will affect your racing abilities, so you always want to make sure you have enough cash on hand to grab a bite to eat and fix up your bike before a race.

The demo completely won me over stylistically, but left me with concerns about whether the final game will be able to stand on aesthetics alone. The racing was fun, but not nearly deep or engaging enough to keep it from getting old when I needed to grind for the entry fee for a big race. And aside from a few fun interactions I had before even leaving Earth, which happens in the demo’s first few minutes, what I played was light on interesting characters or dialogue. That could work to the game’s advantage if it can tie the feeling of loneliness into its theme of scraping by, but it could just as easily backfire, leaving the game feeling empty.

Fortunately, we don’t have to wait long to see if the game lives up to its extremely compelling aesthetic. Desert Child will be out on PC, PS4, and Nintendo Switch on December 11, and on Xbox One the next day.