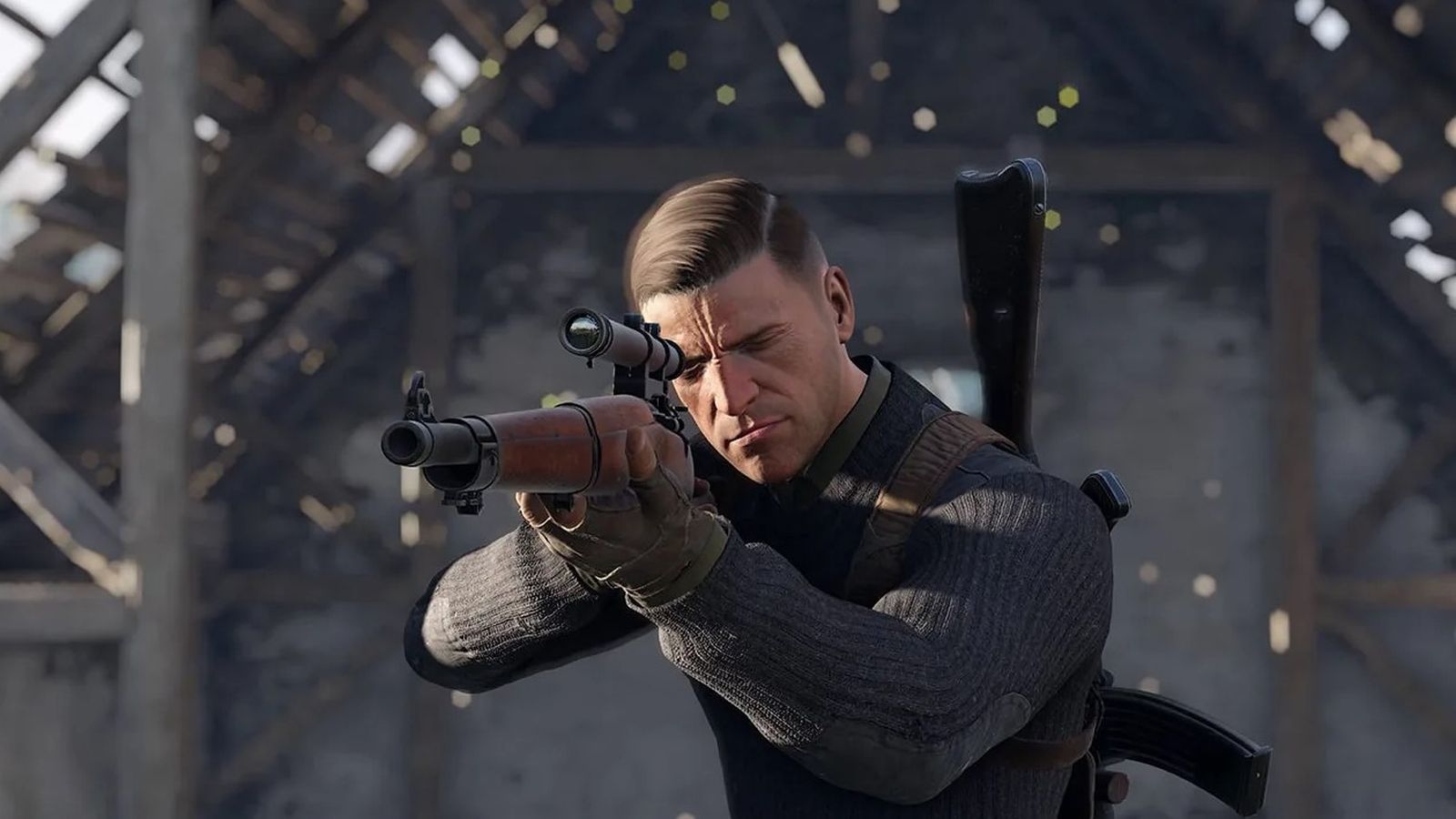 We’ve had five mainline titles, as well as a handful of offshoot sniping games from Rebellion Developments in their quest to create the ultimate sniper game. With Sniper Elite 5 coming roughly a month after you read this, it seemed the right moment to get behind the scope and see what’s new with this latest installment. This time around, however, I took a slightly different approach than I normally would…

Sniper Elite 5 takes place in France in the year 1944. You are Lieutenant Karl Fairburne, a member of an elite US Rangers tasked with a mission to weaken the Atlantikwall fortifications (a 2,000 mile long fortification) along the coast of Brittany. During our hands-on session we jumped to the second mission, so I’m not sure how we got past that legendary real-world fortification, but it starts just inside the borders of France. A Nazi officer named Abelard Möller has taken up residence in the seized French Chatteau De Berengar, setting up an office on the top floor. In it lies the key to something called Operation Kraken, and we’ll need to move past a massive battalion of entrenched soldiers to reach it. If, in the matter of finding whatever you might find in his office, you are given the chance to take out Möller, so much the better. Another officer, a Friedrich Kummler, also needed killing. I knew if I played my cards right, I’d be able to accomplish my primary goal without pulling the trigger even once, but I can’t miss out on an opportunity if it presents – we’ll see what happens.

Normally during press events you are frankly a bit rushed. Stealth missions usually go loud as you have little time to really learn a level to approach it properly. This time around, I was determined to finish my mission with as little noise as possible. Sure, it means I’m eschewing the excellent sniping that the series is known for, but we already know that’s good. No, I wanted to see if a full-stealth operation was viable. This mission would require careful movements and a lot of sneaking.

Before getting started, I selected my tools. An M1903 sniper rifle would handle my longer shots, though I’d give up loading speed for additional range. For a sidearm I’d want something I could draw, aim, and fire quickly, though the Wellgun SMG gives up fire rate for those traits. With my long and mid-range weapons selected, I’d want something quiet if I needed to take more drastic steps. A Wellrod single-shot suppressed pistol would be all but useless in a firefight, but would give me the tactical advantage needed. 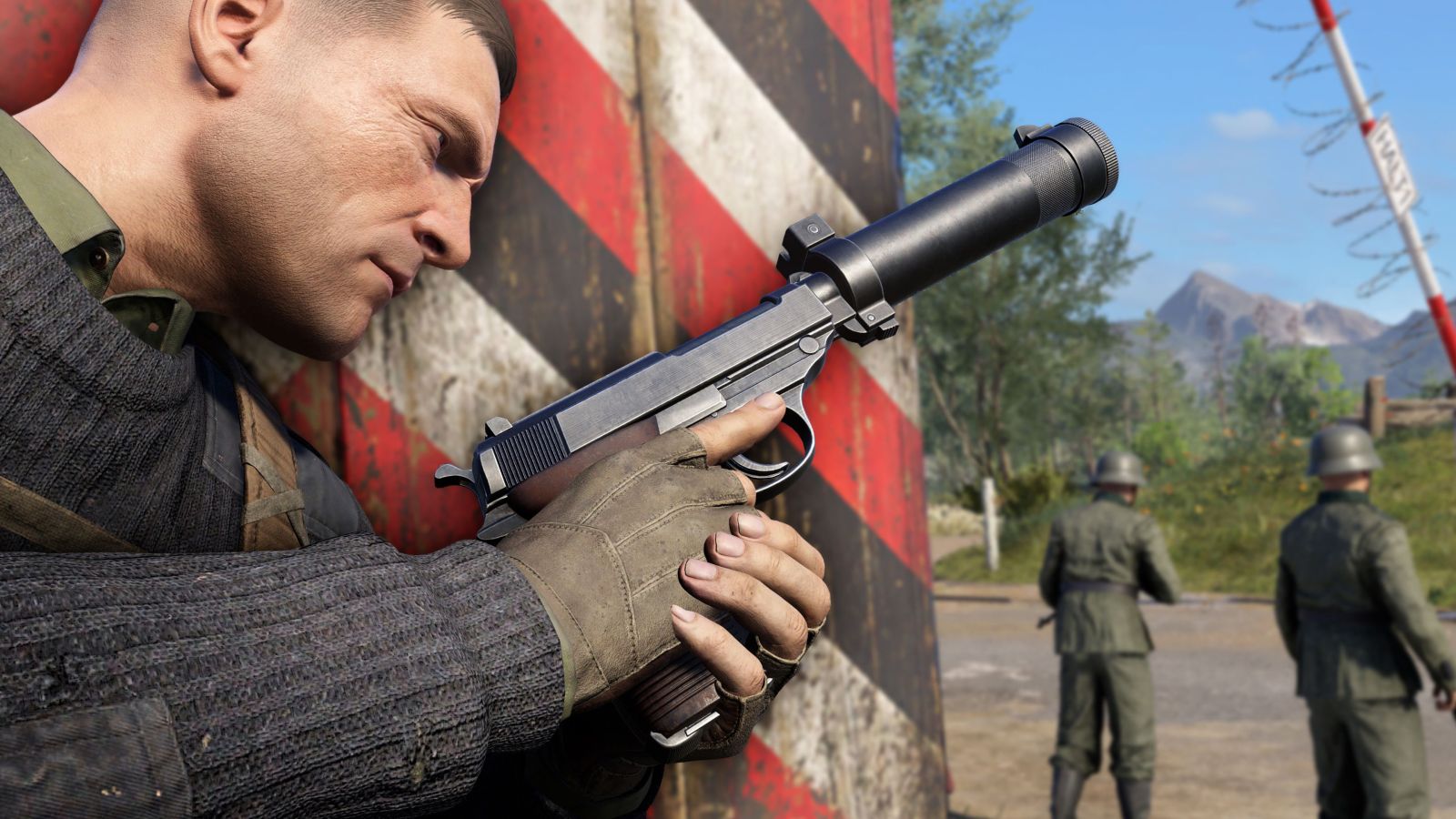 Turning my eyes to my skill panel, I had few options at only the second level, but not for lack of choice. There are 28 skills waiting to be unlocked, split between Combat, Equipment, and Body. Within each category are skills such as increased focus range, additional health, faster heart rate stabilization after running, extra ammunition, and more. After a short ride with a fellow Resistance fighter to get to the outskirts of the Chateau, it was time to set out on my mission.

Utilizing my scope I spotted a handful of routes. The maps are essentially open to any approach you might have, as long as you get it done and escape in one piece. Pulling my binoculars I was able to eavesdrop on the nearby soldiers (try to not think about the realism for that, moving on) which revealed some additional information on the location, as well as some mundane conversations between them. It also revealed a difference between the scope and binoculars, and a reason to use the latter. When zooming in with your rifle you are ready to take the shot, but any conversations captured are partial, and targets marked are temporary. If you want a more complete picture, you’ll need to use the binoculars. Sure, it leaves you exposed, but it’s the only surefire way to ensure you have all of the pertinent information, and you can spot targets at a further distance. 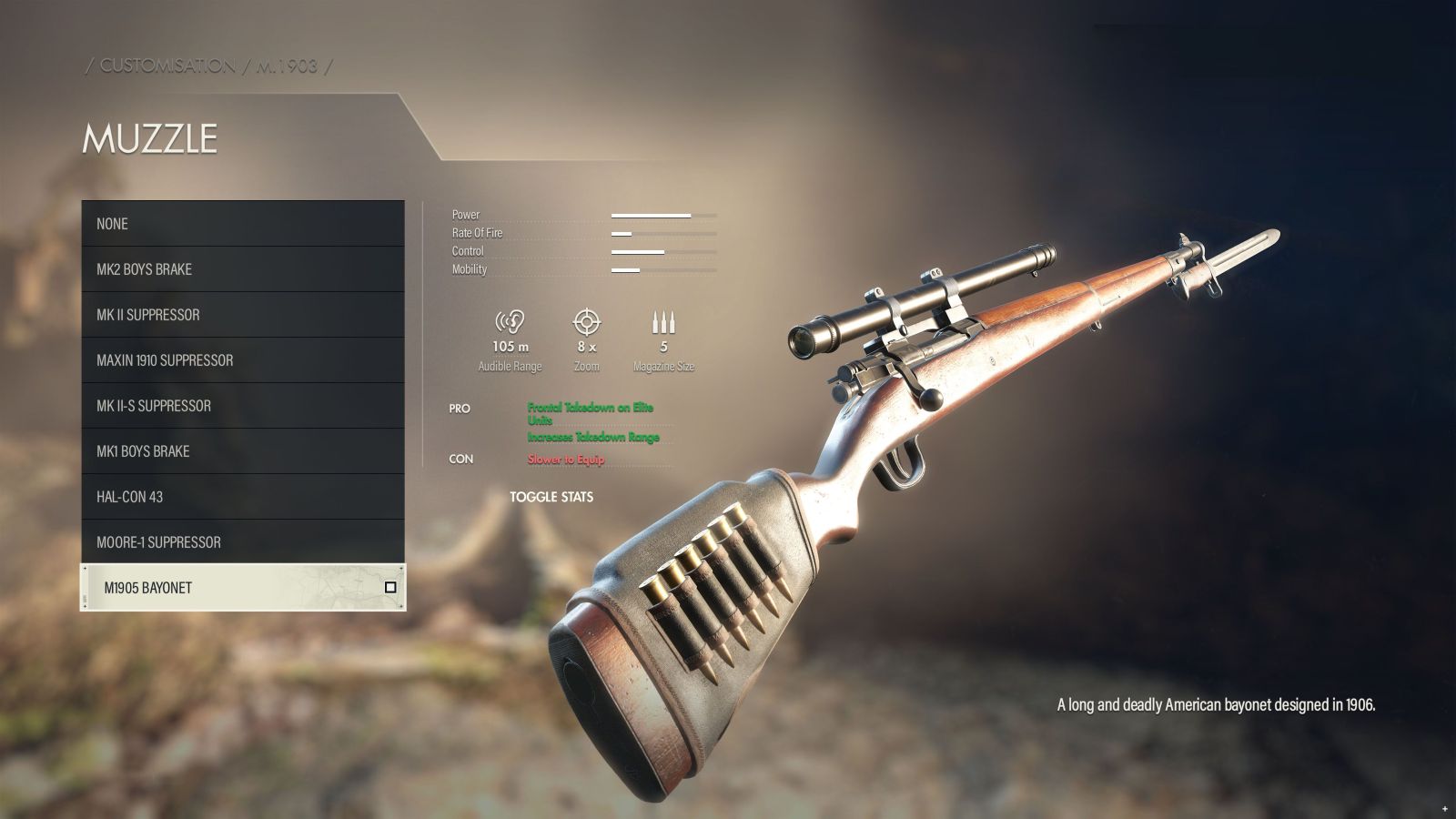 Looking at soldiers you’ll learn some interesting information. An infantry soldier I spotted is armed with a non-scoped rifle, carries a Luger sidearm, and has a landmine in his possession. He is also standing 190 meters away, and has a resting heartrate of 61bpm. I’m not sure how I know that last fact, but listening in I find out that his name is Wendell Siegel, and that he fell asleep on guard duty. He’s now being subjected to punishment detail and blames somebody named Tillo for his plight. Some of this is useful, and some of it just humanizes Mr. Siegel. It’s not gonna stop me from ventilating his skull on a louder run, but it’s interesting.

This intel gathering also works on other objects as well. Looking at a cargo truck, I can see the distance, as well as the status on the exhaust, engine, radiator, and the fact that it’s carrying explosive cargo in the back, and this model has an engine at the front, and that it’s occupied by two people. Not just gee-whiz information, this can be used to disable the vehicle, or when you tag something with a suppressed weapon, disable it. This could cause a soldier to come look at why their exhaust is now making a lot more racket, pulling them away from a sightline where they might spot you, or setting up a more desired shot. Looking at my environment, I was also able to spot some objects that would collapse or explode, granting additional paths, or just damaging or killing those in the way. It’s clear the Rebellion team is looking to enable a lot more flexibility in the environment for this outing, and I’m excited to see all the ways I can approach my missions beyond simply taking increasingly longer shots. 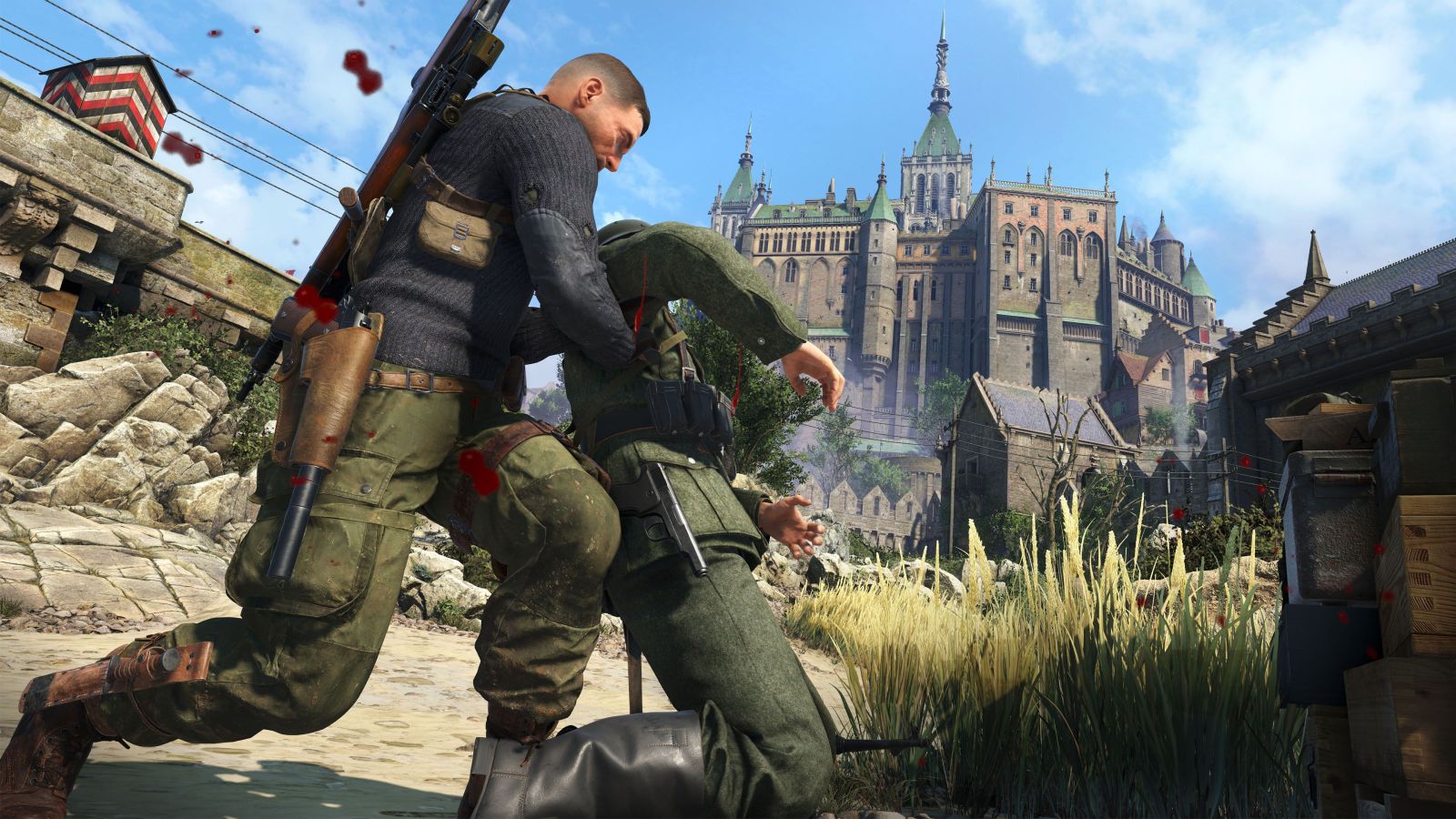 Making my approach, I was careful, but not quite careful enough. I got spotted and had to go loud briefly. Thankfully, I dispatched my enemies fast enough and quiet enough where I only startled a few of them in a small space. Dragging away the bodies and being extra careful, I was able to cover my tracks and slowly approach the occupied Chateau. Once again I was presented with a wealth of options on how to approach the entry. Seeing a fellow sniper was perched in a nearby tower, I carefully approached him from behind and “took his position”. With clear sightlines I was able to see a relatively clear first floor approach through a solarium, a potential entrance underneath a nearby bridge, a zipline out in the open, and a creeping vine near a window. Opting for the latter, I was finally able to get into the house proper.

Finding myself extremely exposed in the posh third floor, I knew I wanted to take a more subtle approach to reach Möller’s office. Remembering that I’d overheard something about repairs to the attic, I knew this was my path. Carefully scaling a circular staircase led me to the top floor, and quietly dispatching a few more snipers and roaming soldiers, I uncovered a locked door. Picking the lock gave me access to the space being repaired. Dropping through a gaping hole, I found myself smack in the middle of Möller’s office! Thankfully he had wandered off somewhere, leaving me to pilfer intel. With the information in hand, I could easily extract and call it a day, or I could double back and collect some stolen artifacts, or most importantly “ventilate” a Nazi officer. While I’m sure the previous owner would appreciate their trinkets, it was time to give Friedrich Kummler some lead poisoning. 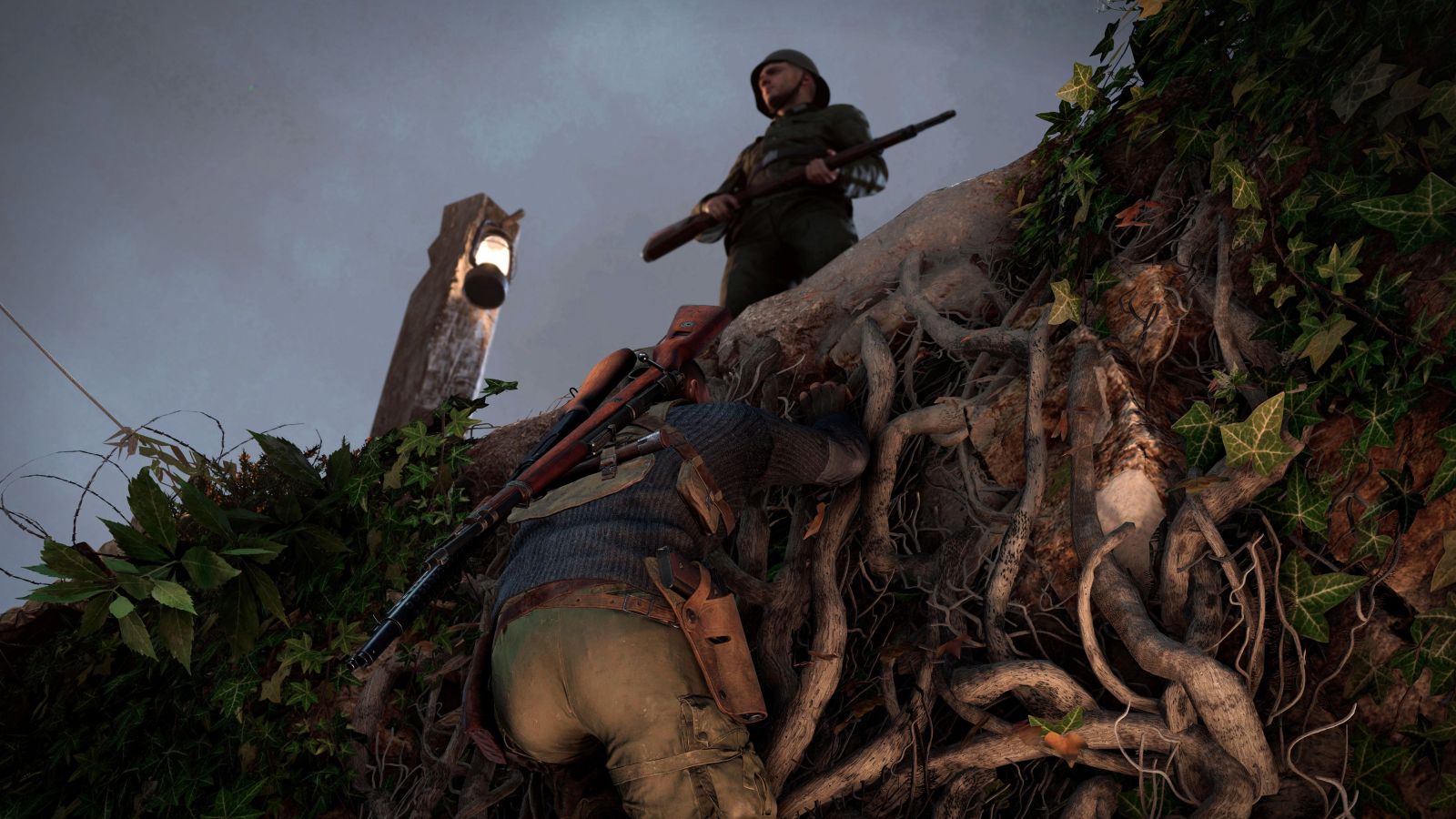 Skirting disaster, I went downstairs and headed to the central Ballroom. In it I found several Nazi soldiers looting the place, with one soldier sitting dead center. With a quick confirmation of my target, I had a golden opportunity – Kummler was sitting directly underneath a beautifully filigreed candelabra chandelier. In a nod to Hitman, I popped the chain holding the chandelier, dropping it directly onto Kummler’s head. Carefully backtracking, I used the zipline I spotted earlier to escape the Chateau, skirting the edges of the grounds to finally reach my egress point.

Tallying up my score, I unlocked non-lethal ammunition, saw that I completed two out of the three objectives, and had earned almost enough XP to reach level 4. I also picked up a medal for confirming our suspicions about Operation Kraken. After that I got a debriefing field report showing that I leaned heavily to stealth, having taken out 13 soldiers, leaving two of them unconscious, but raised 0 alarms. 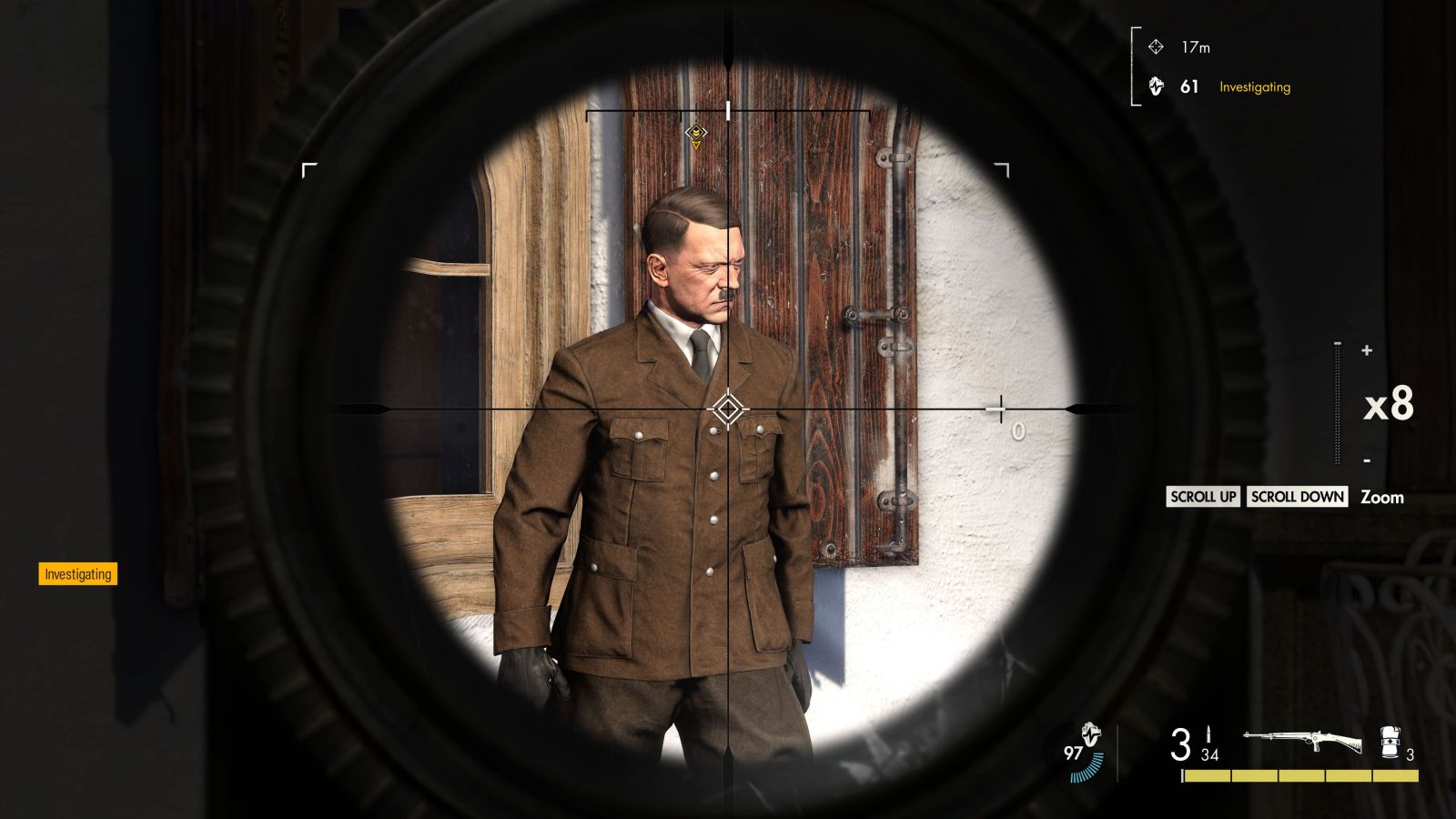 So does the stealth in Sniper Elite 5 work? Absolutely. The controls felt tight, the gameplay felt tense, and I felt like I had far more options than I expected. Does the shooting game feel good? As good as it ever has, as does watching the gruesome results in slow motion. But there was one thing that I didn’t notice until I re-watched my gameplay…

The game supports full cooperative play, that’s no secret. It’s also launching on Xbox Game Pass, Xbox One, Xbox Series X|S and PlayStation 4 & 5, Epic, Steam and Windows Store and will be fully cross-platform compatible. Again – known. What I don’t know about was a little thing I spotted in the corner while in the menus.

“Your game is open for Axis Invasion”

Invasion Mode is a new gameplay mode where another player can invade your game as an Axis Sniper, tasked with hunting you down and taking you out. If you enable this function, you’ll receive a notification saying that you’ve been invaded. You now have an unpredictable human somewhere in your level, completely ready and able to blow a hole in you a mile wide. Your perfectly planned mission is now a high-stakes cat and mouse game, with success earning you in-game rewards and unlocks, and failure meaning death. Good luck!

Naturally, you can disable this, but it’s something we’ll be trying out – it sounds way too cool to pass up. Best of all, we won’t have to wait long to find out – Sniper Elite 5 has recently gone gold, and will be released on May 26th. Look for our full review right here at GamingTrend.com.