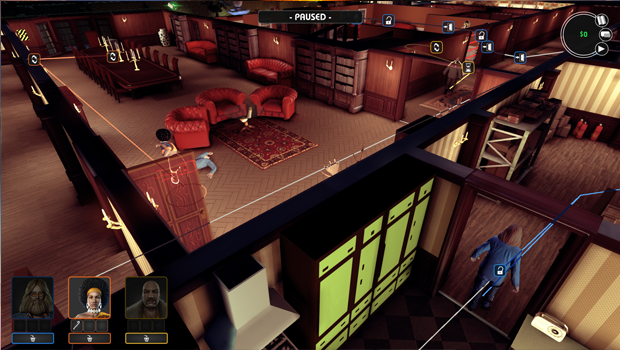 Earlier this week, I was given a preview of the 70’s style heist game Crookz from Skilltree Studios. Crookz’ designer Sebastian Merkel showed off two levels as well as many of its mechanics.

Crookz’ stand out feature is its aesthetic. Skilltree has even brought on an American team member to help them make the game resemble 1970’s San Francisco as much as possible. The furniture, clothes, and music all reak of the decade, and it’s incredible. The funky beats definitely add a nice touch. I’m tired of hearing the same generic “sneaky-style” music for heist games anyway. “For the music we hired a real band,” said Merkel, “It should sound like the streets of San Francisco, with wah-wah guitars and stuff like that. Pretty much cliche out of the 70’s, but we like it like that.”

Each level in Crookz starts with a scheming phase, which allows the player to view the entire map and everything in it, including objectives, switches, powerups, and guards. Also during the scheming phase, players can purchase action items, which are essentially one-time use powerups that allow one of the three characters you’ve selected to bypass a specific obstacle, such as the key allowing the acrobat to unlock a door when normally she would need the lock picker’s help.

Players select teams of three characters, each with their own special abilities. The demo showed off a bruiser who can easily knock out guards, an acrobat who can run quickly, a lock picker, and a technician who can use heavy electronics with ease. Merkel promised six characters in the final game, including a “1970’s robot.” Once a mission is finished with assigned story characters, players can go play it again with any character setup of their choosing.

Once the mission begins, players can start planning out the heist, by either delivering orders to each character while paused and then unpausing to let those actions play out, or issuing the actions in real time. The novelty of being able to play without pausing is fun, but Merkel warns against it. “You can play our game in real-time, but you will always have the best score if you do the proper planning. It’s not about hand eye coordination, it’s about the proper planning.”

The game is presented isometrically and players control each character to reach a goal. One demo had the crew grabbing briefcases, with the other trying to get a hold of a shipping container, but Merkel promised more unusual objectives in later missions. “Later on, the game turns into sort of a James Bond story,” Merkel told us, going on to talk about supervillain lairs and submarines.

Action items are scattered throughout the level so that players don’t feel cheated if they don’t choose an optimal character set for the stage. “If you’ve made the wrong choice beforehand, like buying the wrong [action items], then it shouldn’t stop you from playing the level,” Merkel said, “This isn’t the best stuff, but it’s the minimum you need to succeed in the level.”

In lieu of a traditional player vs. player multiplayer, players can challenge their friends online to complete missions within certain time frames or with certain team compositions.

Crookz is being developed by Skilltree Studios and published by Kalypso for Windows, Mac, and Linux. You can expect the game in Q2 of 2015.