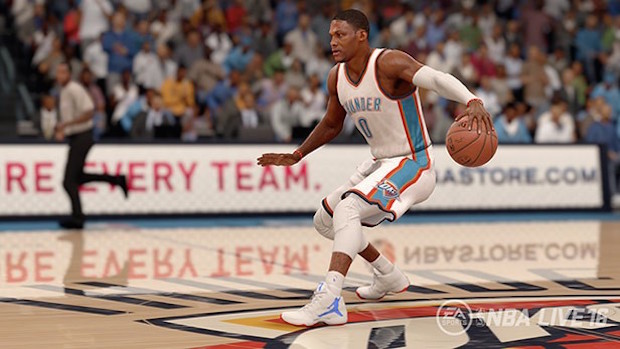 NBA Live has been a series struggling to find an identity since its resurrection a few years back. The past two iterations of the series have been a total mess, with bugs being prevalent from opening tip-off. In order to fix that, it is clear that EA Sports has been hammering away on their series. This year, they are focusing on improving ball handling and the shooting motions. NBA Live has always been an awkward handling series with horrid animations; this new installment is hoping to finally correct that. But whether that will bring the series up to NBA 2K’s standard is still to be seen.

There have been a host of new animations introduced in NBA Live 16. The most notable ones come from using the right stick to perform dribbling techniques on your opponent. For example, using the right stick to fake a crossover then drive down the lane with Steph Curry now looks exactly how you would expect. EA Sports has a dedicated worker whose entire job is to recreate the movements of popular players to perfection, which comes across in the game itself. The only issue with this is that the movements are much slower than you would expect them to be. To bring up the Steph Curry example again, in a real game, he cuts and drives in the blink of an eye, but that does not come across in NBA Live 16. Instead, it feels as if there is a heavy weight holding him back for a second before he actually begins to drive.

The other animations, such as smoother rebounding and better screens look rather impressive. If you slow down the game and watch how the AI interacts with one another on a pick, it looks eerily similar to real life. The AI will also slide off of their defender to help on a pick, something you see actual games all the time. If this system could work perfectly in the final game, it could make games flow seamlessly. Unfortunately, if it doesn’t, it could bring about some truly frustrating defensive errors. However, until we have the results, it is nice to admire the new off-the-ball animations and hope for the best.

One thing that seemed to be much tougher this year around was being able to find separation between you and your defender. The demo shown had me playing as the Warriors against Cavaliers, meaning much of my time was spent trying to shake the Cavs defenders with Steph Curry. To be fair, the Cavaliers have an excellent defensive team, but it still felt a little too tough to get loose. There would be situations where defenders felt like they recovered too quickly, leaving no real opportunity to get off a successful shot. Of course, you can get around this by running plays or successful screens.

You activate a screen by holding L2 and waiting for your big man to set up, then after having your defender run into it, you let go of L2 which sends the pick setter towards the basket. This is a bit more precise than NBA 2K’s screen system. Both of which work pretty well, but the extra precision in NBA Live does make it feel a tad more rewarding when you hit a perfect pass off a screen to a driving Draymond Green. Apart from basic screen, you will also have a play wheel pop up that is accessible with the D-Pad. Unfortunately, that was not available in the demo being shown.

Perfecting the motion of a shot is a hard thing to achieve in a video game. NBA 2K has done a very solid job of doing that, and only got better with their recent implementation. NBA Live 16 is looking to achieve the same greatness with their new shot meter. Unfortunately, the build being shown at E3 did not have the shot meter perfected just yet, but the developers are hard at work building the system. If it comes together perfectly, you will get a percentage for each shot you take. If you are guarded or shooting on the move, that percentage decreases. If you are wide open, the percentage goes way up. This is a nice thing to have on plays driving to the basket, where you can see what the actual percentages of hitting that insane layup was after celebrating your accomplishment. If the percentage system works as advertised, it could be a fun thing to help fix your shot.

EA Sports was being rather quiet when it comes to their features outside of the exhibition mode. No career mode of any sort was shown off at E3 2015, but they did confirm they would have one in the game. As for the actual features within the mode, that is still up in the air.

Video game development is an extremely arduous process. This process becomes even more tiring when you are producing a game on a yearly basis. The NBA Live series has taken some serious flak in the past few years, and deservedly so. While NBA Live 16 is not shaping up to be the perfect basketball game, it is clear that EA Sports is making the series better. They are trying new things, some of which will work, and some that will ultimately fail. They are getting there, slowly but surely. The only issue is the king of basketball games, NBA 2K, has been there for years. It will be interesting to see what kind of fan base rallies around NBA Live 16 when it is released on September 29th.