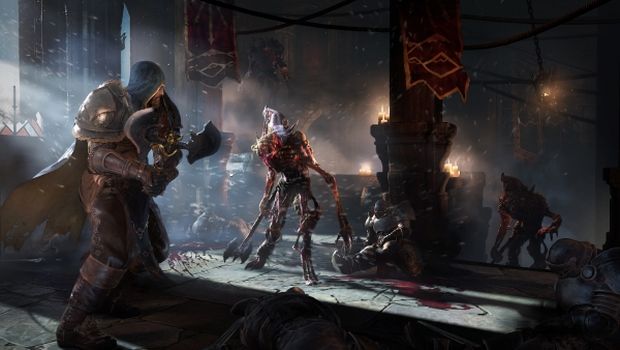 What’s the difference between a game being hard, and being obtuse? Where do you draw the line between a challenge and a tedious time-sink? These are obstacles most games answer by simply entering a few difficulty settings and be done with it. But some games, even when they include these options, are brutal to their bones. The challenge isn’t as much about if you’ll meet your end, but meeting it efficiently. How much will your imminent death profit your next following life?

Recently there’s been an Western surge in the popularity of these types of games which have long been a Japanese staple, Dark Souls and Dragon’s Dogma: Dark Arisen just to name a couple. Now Bandai Namco is throwing a new challenger into the ring with Lords of the Fallen.

Lords of the Fallen had a bit of a looming presence at this year’s E3 with its dark and gothic wall hangings and stained glass styled window films that lined causeways. The rumors seeping through the crowd touted it as Bandai Namco’s answer to Dark Souls and how it had a “new understanding of difficult gaming.” I had to admit it got me intrigued, even though controller-snapping frustration has never really been my flavor of choice.

But I really wanted to know firsthand what the game was about, and so I lobbied for the chance to get an early go at it. However, when another member of the team and I finally got our shot, we came out the other end not really having much of an opinion at all.

That’s not to say Lords of the Fallen struck me as bad. As far as first impressions go it didn’t seem to lack for anything. The graphics were expectedly gorgeous and as thoroughly detailed as any piece of artwork I’d seen. The controls were competent and responsive, if maybe a little squishy. And as far as the difficulty was concerned, there wasn’t a single encounter that didn’t demand my complete attention and strategic consideration. A health potion used here could be one I actually needed more there, and so on.

However something, maybe it was just the way the demo was set up or the equipment our character was arranged with, seemed… off. It was like being invited to a cooking class but then only tasting the finished recipe. Even for a demo there was no introduction, nothing to immerse me in the world, just a kingly looking warrior, a dungeon full of baddies, and path to proceed through. Indeed, that may in itself have been the point, and if so the message was clearly received.

Despite what Lords of the Fallen is still keeping to itself, what it was willing to share proves its on the right path. The environments are dank an oppressive, full of narrow corridors and relentless opponents. Clearing two rooms took the better part of a half-hour, a task which had evolved from panicked button mashing to a series of sword parries, magic missiles, environmental kills, and tactical weapon swaps. Mere “familiarity” with the games functions was met with brutal failure even before you exited the first hallway, and considering how much you have to work with that’s saying a lot.

Your character’s armor, equipment, weapons, items, defenses, health… everything is broken down in intricate detail. Beyond that there was an assortment of real-time choices such as stances that dramatically altered how your character performed and responded in combat. All of this mattered, and every mistake that didn’t cost you now spelled doom for you future.

Ultimately, Lords of the Fallen left me a bit overwhelmed with the sheer density of its content. I didn’t feel as though I’d been thrown into the deep end as much as I’d been waterboarded, but considering what the title is going for I have to admit that’s a very good sign. This title has never claimed to be for everybody, it hasn’t even claimed to be approachable. From its inception Lords of the Fallen has been a challenge to gamers who have the courage, patience, and will to be a master of its workings.

If that’s a gauntlet you’re prepared to answer, then the devs at Deck 13 Interactive have been generous gods, and are about to bestow many blessings upon you.