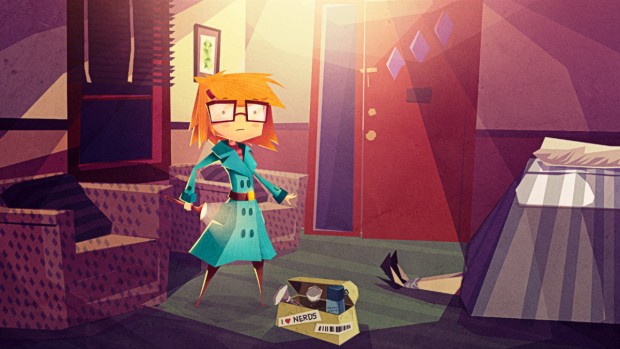 Narrative-based episodic adventure games are more common than ever these days. Whether it’s a licensed game such as The Walking Dead and The Wolf Among Us from Telltale, or an original storyline from a larger developer, like Square Enix’s Life is Strange, it’s hard not to take notice of this genre’s popularity and evolution as of late.

Enter Jenny LeClue: Detectivú, an old-school point-and-click adventure game that returns the genre to its roots. Players star as young Jenny LeClue, a detective who sets out to find the truth after her mother is accused of murder. Jenny LeClue features a lot of classic adventure game concepts, such as an emphasis on story and heavy interaction with in-game objects, and most puzzles will require some creative thinking to progress. It’s a type of adventure game that is rarely seen in today’s gaming landscape, and yet Jenny LeClue still feels intuitive and approachable for modern audiences. It’s an experience that evokes nostalgia while still managing to feel fresh.

Jenny LeClue also boasts an impressive visual presentation. The entire game is hand drawn, with charming animations breathing life into the game’s set pieces. Characters and environments show a notable amount of detail, and the game’s dry and restrained color palette fits its mystery theme wonderfully. Watching rain drops splatter on windowsills as lightning flickers in the background is just one of the beautiful animations I witnessed that helps this game absolutely nail its tone.

This adventure also features a unique approach to storytelling. Within the game world, Jenny LeClue is a fictional storybook character, with the book’s author acting as narrator, giving context to the actions that Jenny is performing on-screen. Jenny LeClue manages to successfully walk the fine line between different tones as well; the mystery element strikes an air of somberness, and yet there are still plenty of humorous and over-the-top moments to help give the game an occasional lighthearted feel. It’s satisfyingly silly but succeeds at creating a sense of drama when necessary.

Player choices will factor into the game in a big way. Jenny LeClue: Detectivú is only the first part in a planned trilogy of games, and some choices may have significant impact on later chapters. In a fun twist, some choices will even be tracked and enumerated, with developer Mografi picking the popular vote as the canon choice moving forward. This creates a community effort in deciding Jenny’s story, giving the game a sense of collaboration. However, it also unfortunately means that some individual choices may not carry over the way that the player intended. Still, it’s an impressive approach that could prove exciting to watch unfold.

The hands-on demo was brief, but managed to give us a great example of what to expect from Jenny’s gameplay. Taking place mid-game on a stormy night, Jenny breaks into a suspect’s home to search for clues. The room was dark at first, with only a few objects to interact with. After turning on a lamp, a slew of new interactive objects becomes visible, from flashlights to picture frames. Inspecting a nearby note left inside a typewriter, Jenny is provided with a series of hints that lead her to an adjacent bookcase where another set of clues can be found by reading through its books. The demo concludes shortly after this sequence, but served as a fine sample of what to expect in the full release.

The snippet I played was brief but has left me intrigued by Jenny LeClue’s narrative style and presentation. Its detective-based gameplay and gorgeous art style are shaping up to be quite the impressive package, and I look forward to getting my hands on the full adventure when it releases in 2016.

Jenny LeClue: Detectivú will be available on PC, Mac, Linux and PlayStation 4. A Vita demo was also on display, but the developer remains undecided if it will be released in its entirety on Sony’s handheld.

For more on Jenny LeClue: Detectivú, as well as all of our PSX coverage, stay tuned to Gaming Trend.