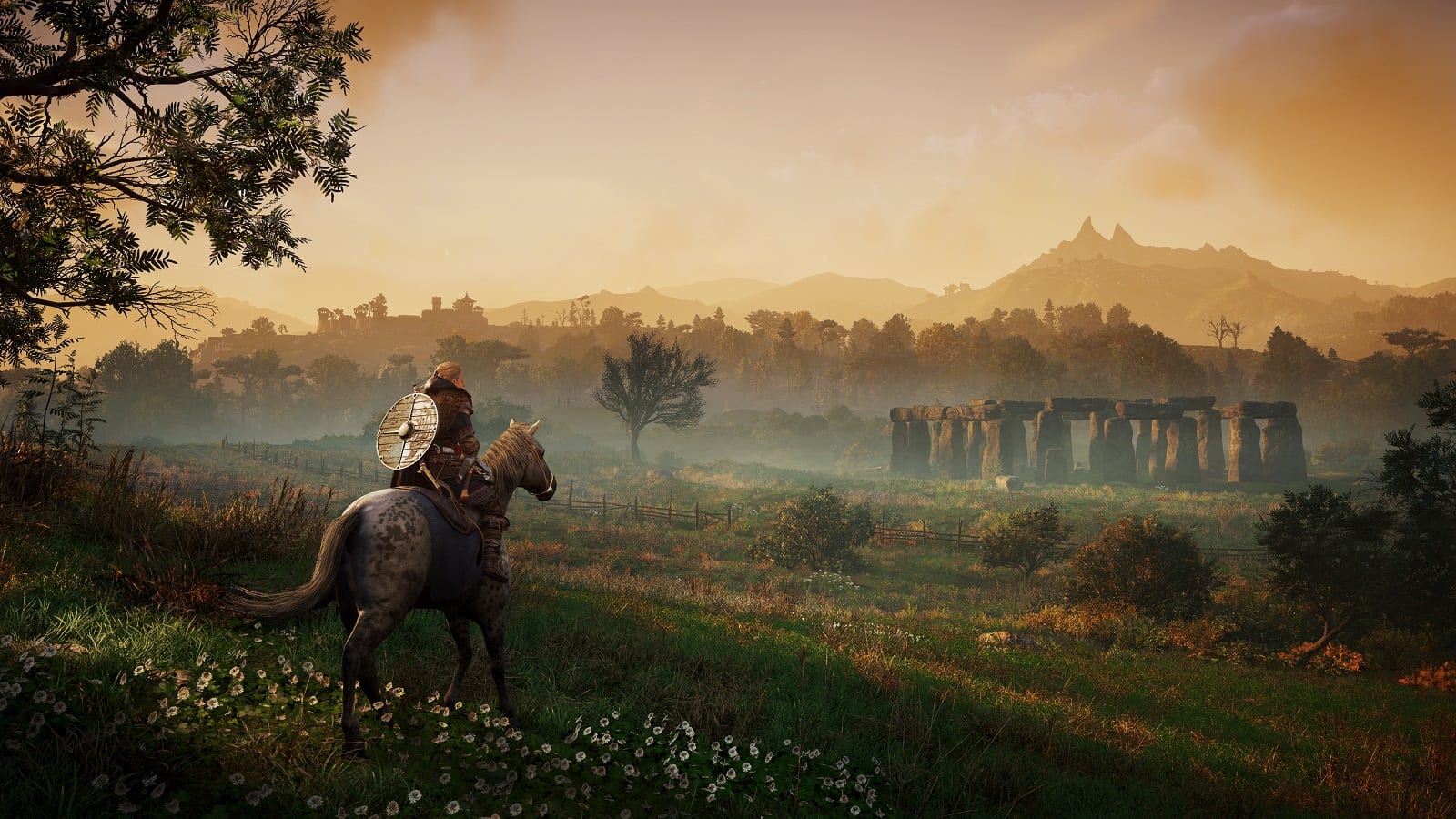 Our last preview of Assassin’s Creed Valhalla focused mostly on the bit of story we got a glimpse of, so this time I want to talk about mechanics. Combat, exploration, quests, and even dialogue have all changed slightly since Odyssey with the series leaning even more into the RPG genre.

Combat in Valhalla seems to be taking cues from Zelda and, as loath as I am to use this comparison, Dark Souls. Whereas the previous games had you combating several foes at once, and that’s still true here, you’ll mostly be focusing on one target at a time since many enemies have shields. You lock on to your chosen opponent and wait for them to drop their guard, or break it yourself with repeated heavy attacks by tapping the right trigger. Another way to make enemies vulnerable is to parry their attacks by pressing the left shoulder button the moment they attack or shoot highlighted parts of their body with your bow. All of these will slowly diminish both their health and their guard meter, just above their health bar. Emptying the guard bar will let you perform a devastating stomp attack, which is less of a stomp when not in stealth and more impaling them on their own weapon. I chose to use dual axes (you can equip whatever you want in each hand) and combat felt very weighty. My swings were a bit slow but packed quite a punch, so every hit felt like it mattered. This is emphasized by the new health system- you take quite a lot of damage when you get and a limited amount of charges with which to heal yourself, replenished by gathering food. All of this makes combat much harder than in previous games, but also much more engaging and satisfying. Not every encounter is as involved, you obviously don’t need to break a wolf’s guard, but the ones that are will keep you on your toes.

Stealth has seen a few additions as well. If you watch the whole six hours of footage on our YouTube channel, you’ll see that my sneaking skills are a bit rusty, but the assassinate animations are much shorter here, making for less time to be spotted while doing the dirty deed. You can also perform stomp attacks immediately on enemies lying prone while in stealth, which is extremely helpful for taking out foes that wouldn’t go down immediately with an assassination attack. The biggest addition, however, is hostile settlements. Toppling the monarchy is bound to gain you some enemies, and when entering places where the majority of the populous hates you you’ll want to put up your hood and avoid getting too close to guards. This functions a lot like it did in Assassin’s Creed 1 and 2- you can even blend in with crowds or avoid notice by sitting on benches. While I have liked the series a lot more since it started becoming open-world RPGs, I like how they brought this back for some towns; it makes you warier of your surroundings and on edge.

While the build I played only allowed me to explore a small portion of the map, it’s still a large area packed with things to do. You can sail the rivers of England and go viking (which, yes, is actually a verb and correctly used in the game’s dialogue) to raid settlements for loot, discover synchronization points for fast travel, discover ability scrolls to learn new moves, and find people to help in world events. World Events are basically untracked side quests; they’re fairly short but have a lot of charm to them. In one, I accidentally interrupted a couple’s Rapunzel roleplay and had to stand guard for a bit, while in another I consoled a little girl about her father possibly not returning home before the last leaf fell off her tree, then promptly shot the leaf with an arrow and took it with me. They’re all very endearing, and honestly, I enjoyed them a bit more than the actual plot here, which consists of replacing the area’s king with someone more to your liking. A lot of these side quests don’t even involve combat, which makes them a nice change of pace.

In the last preview, I told you about a side quest I did where Eivor engaged in a sort of rap battle with another person. Turns out, this is called flyting. You need to match the cadence, rhyme, and context of your opponent’s phrase to verbally trounce them. Winning will increase your charisma stat, which opens up dialogue options both in the story and other side content. On top of being a fun distraction, upping your charisma is super useful. For example, at one point in the story, I need to bribe someone for information. With my charisma at level 2, I was able to convince them to take only half of their desired amount, saving me a lot of silver. In another instance, level 3 charisma would allow me to get into a fight club without knowing the password. Unfortunately, there were only two flyting opportunities available in the early build, so I had to find clues nearby. Being witty certainly makes things easier, but it’s not required at any point.

Finally, the level up system has seen significant changes. Upon a level up, you’ll gain two skill points to put into three trees to gain stat bonuses like more HP, better damage with light attacks, or more buffs from certain types of equipment. I can’t tell for certain at this point, but it seems like this change was implemented to stop the game from gear- or level-gating you. We’ll only know for sure when we have the full game in our hands, but hopefully, this will offer the player more freedom in progression and exploration.

All in all, I had a lot of fun with Valhalla. I thought combat was a little too slow, but that might just be the streaming client we used to access the preview, so I’ll reserve judgment until the game’s running on a machine in front of me. I can’t wait to explore more of this gorgeous world come November.