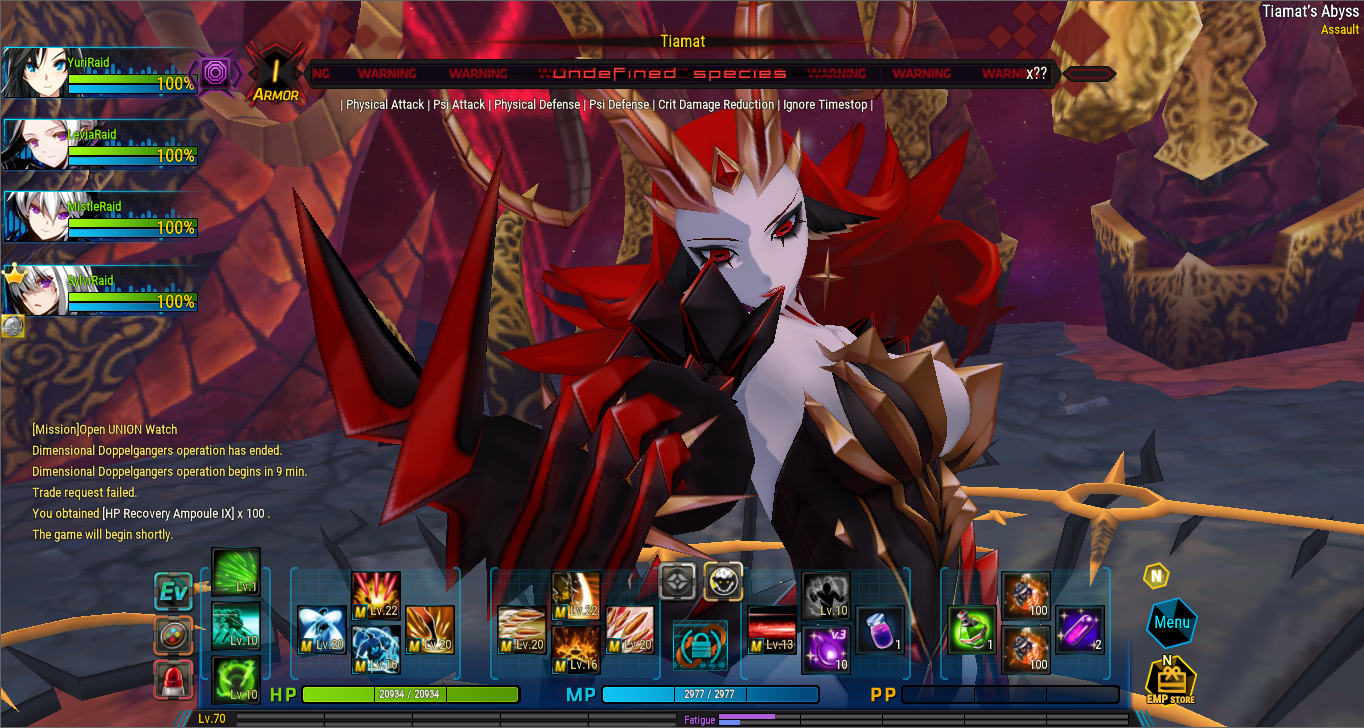 If you know me, you’ll know that I’m a sucker for beat-em-ups and hack-and-slash games. I also love anime-inspired visuals, so I’m always down for a mixture of the two. It seems that En Masse has listened to my unspoken pleas, as the company has announced its launch of the online multiplayer game Closers for this Tuesday. I got some time with a couple of staff members as they took me on a preview journey of the game’s world, as well as a sneak peak of the high-level endgame content included in Tuesday’s release.

Closers takes place in 2020 after the First Interdimensional War. Monsters from another world had ravaged earth, but thanks to a team of humans with psychic powers, known as Closers, the portals where the monsters came from were shut off. Closers that participated in the First Interdimensional War formed a group called Union, which is an organization focused on researching portals. However, a new threat looms over New Seoul, as stronger enemies are opening portals yet again. It’s up to a new generation to send these belligerent baddies back to where they belong.

During my preview session of Closers, I got to try out a couple of in-game quests, the first of which was an introductory mission with two other staff members, Stefan and David. The game supports up to four players in a group, and is currently slated to have ten characters across two different factions: The Black Lambs (of which all five characters are available now), and the Wolf Dogs (of which two characters will be available soon). I took control of Yuri, who acted as a midrange fighter with guns and swords and popped into the in-game hub in order to start my first quest.

The two walked me through the Gangnam District, where the mission took place. Gameplay is a beat-em-up brawler, much like the old-school games Turtles in Time or Final Fight, as David told me. Your group is on a battlefield fighting monsters, and you have basic attacks as well as other skills which can be executed and binded to different keys or buttons, depending on whether you’re playing with a mouse/keyboard or controller setup.

You also have health and mana, the latter of which can affect the skills you can use. While a little daunting trying to acclimate to my surroundings at first, the basic gameplay is simple yet very satisfying to control; I felt giddy bashing enemies with skills and basic attacks. In addition, you can also team up and execute group attacks, which means you’ll need to coordinate with your partners in order to maximize damage.

At the end of the quest, there’s a boss battle with a powered-up foe where you’ll have to dispose of it using group tactics. It was quite easy to dispatch, and in the end our team ended up getting the highest ranking the game offers. Closers operates on a performance based grading system, and this can have score junkies going back to try and beat their previous accomplishments. While you can keep playing the same quests over and over again, there is a fatigue bar which increases with each quest you play. It does reset weekly, and David assured me that there would be ways to reset it during the week, so you dedicated players won’t have to worry about this too much.

After my first mission, I got to explore the in-game hub of the Gangnam District. These hubs are where most of the in-game story content will take place, and each of the characters in the roster will have unique dialogue going into the quests, so it’s pretty cool that every character in your group will have a different experience each time. The hub also showcases a nice cast of NPCs, from Edgar (a robot that conducts stage selection) to Ran (the NPC responsible for hub transport). At the time of the beta, the game has eight different hubs, with a ninth one launching with the public release (more on that later). Hubs have shared characters, but some will leave for story-related purposes, with other characters filling in later in the story.

While the main game does center around the intense brawler action, there are a couple of areas where you can relax. You have personal housing in the form of your room, which is shared between your personal characters (i.e. the ones you have in your account), and your pets, who can set out on their own quests through Edgar; you can send them out and they’ll come back with spoils if they’re successful. In addition, you can also decorate and customize your room, with your personal characters inhabiting sections of it while you go out adventuring. Crew rooms are for your other group members if you want to have a communal area to hang out.

The garden, another passive hub area, is a place where “money literally grows on trees!” As you level up, you can gain more plots of land to grow things, which will grant in-game bonuses after a while. You can also grow plants with in-game currency, and even have some pets lounge about if you’d like. (One of the staff members apparently has a garden full of nothing but cat rocks. Allegedly.)

It’s not all fun and games, as Closers edges to some pretty brutal late-game content. The exclusive content shown to me during my preview session was in the form of the ninth hub, known as the Dimensional Ops center. Narratively, this is a special center that investigates a new nightmare realm near the end of the game, which has players fighting harder nightmare stages and bosses. At the end of this quest chain, you get the ability to fight Tiamat, a dimensional being that wants to ravage the earth. This is part of Closers’ new game mechanic, which are raid bosses. These bosses hit hard and relentlessly, and should only be challenged by a group of high-level players (hence the late-game update).

Tiamat is, simply put, a brute. Her attacks can potentially be total party kills if your group isn’t careful, and even with a decked-out Yuri and three other staff members helping me, I ended up getting pulverized a few minutes into the fight. Her attacks are easily telegraphed, but it’s getting to dodge them that’s the problem (David gave me this advice: “Avoid the red circles!”). While you do get the ability to revive four times thanks to in-game resurrection capsules, by the end of the fight, we were unsuccessful in defeating her. We did get to retry and see the end of the fight thanks to some overpowered items the second time around, but it will be interesting to see how quickly the fanbase figures out the right strategy to defeat this monstrous foe. With the enemy vanquished, my preview session ended here.

As a free-to-play action game, Closers does a lot to scratch that beat-em-up itch of old. The slick action and nice anime-inspired visuals are a great mix for the game, and I was surprised that it ran smoothly on my aging laptop. (The minimum specs for the game aren’t too demanding, and you can adjust quality settings as well.) While the core game is free-to-play, there are some starter packs which you can purchase to help you out on your journey, and some that can grant character-specific costumes which will help. Some items may be purchased with gold (in-game currency) or EMP (En Masse real life currency), and there will be content planned every two weeks after launch, with new content spanning for the rest of the year. The first official launch update will include the aforementioned raid boss and high level content, while the next update will include the second character in the Wolf Dog group. I’m excited to see what the post-launch content will hold in the future, and I can’t wait to see what happens next for Closers.

You can download Closers now on Steam or through the En Masse website, and stay tuned for more news here on Gaming Trend.