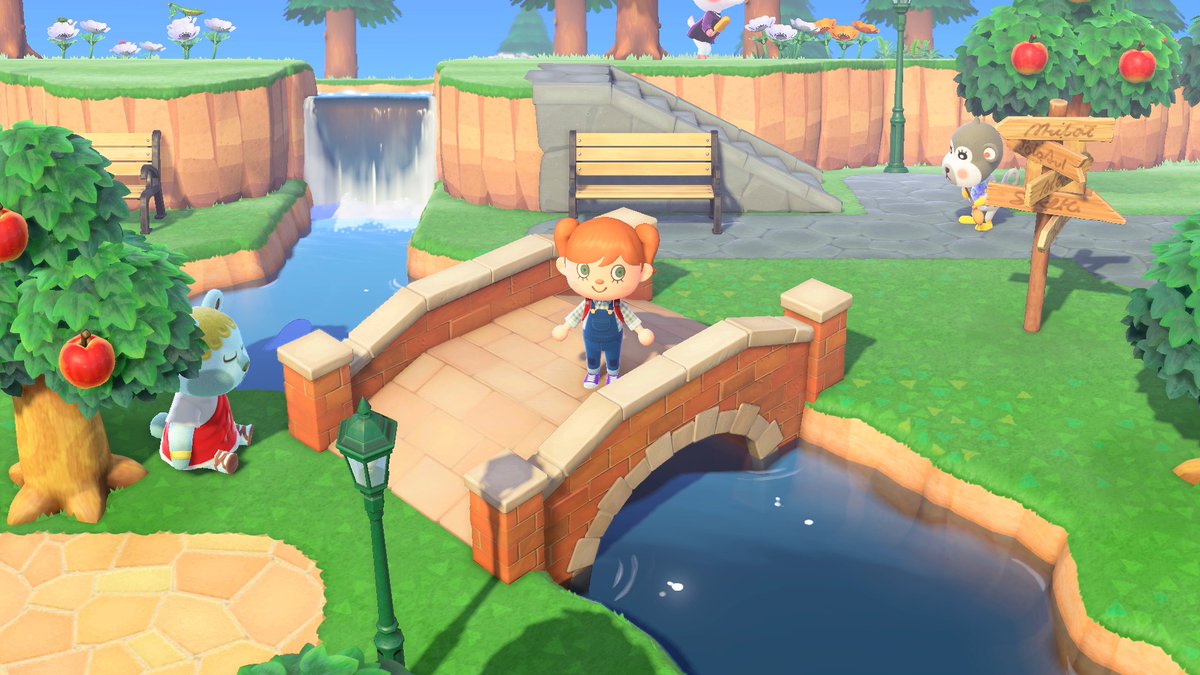 There’s no doubt that the Nintendo booth, which featured the bright colors and unique characters from the upcoming Animal Crossing: New Horizons, stole the show at PAX East. Lines for demos, merch, and photo ops were capped minutes after the show floor opened, and everyone was clamoring to get their hands on that enamel Isabelle pin. And while I may have spent more time than I want to admit standing in lines for merch and pins, I did get to spend a few quality minutes going hands-on with the Animal Crossing demo, and I can’t wait to tell you all about it!

The first thing to note is that the demo was multiplayer, Party Play, so I jumped into the game with a Nintendo handler and a young couple–she was an Animal Crossing veteran, this will be his first time playing an Animal Crossing game. The island had already been upgraded enough that the Residents Services tent has been upgraded to a true building. We started out in front of Resident Services and ran about to explore the Museum before our guide handed control over, letting the three of us swap out being the leader. 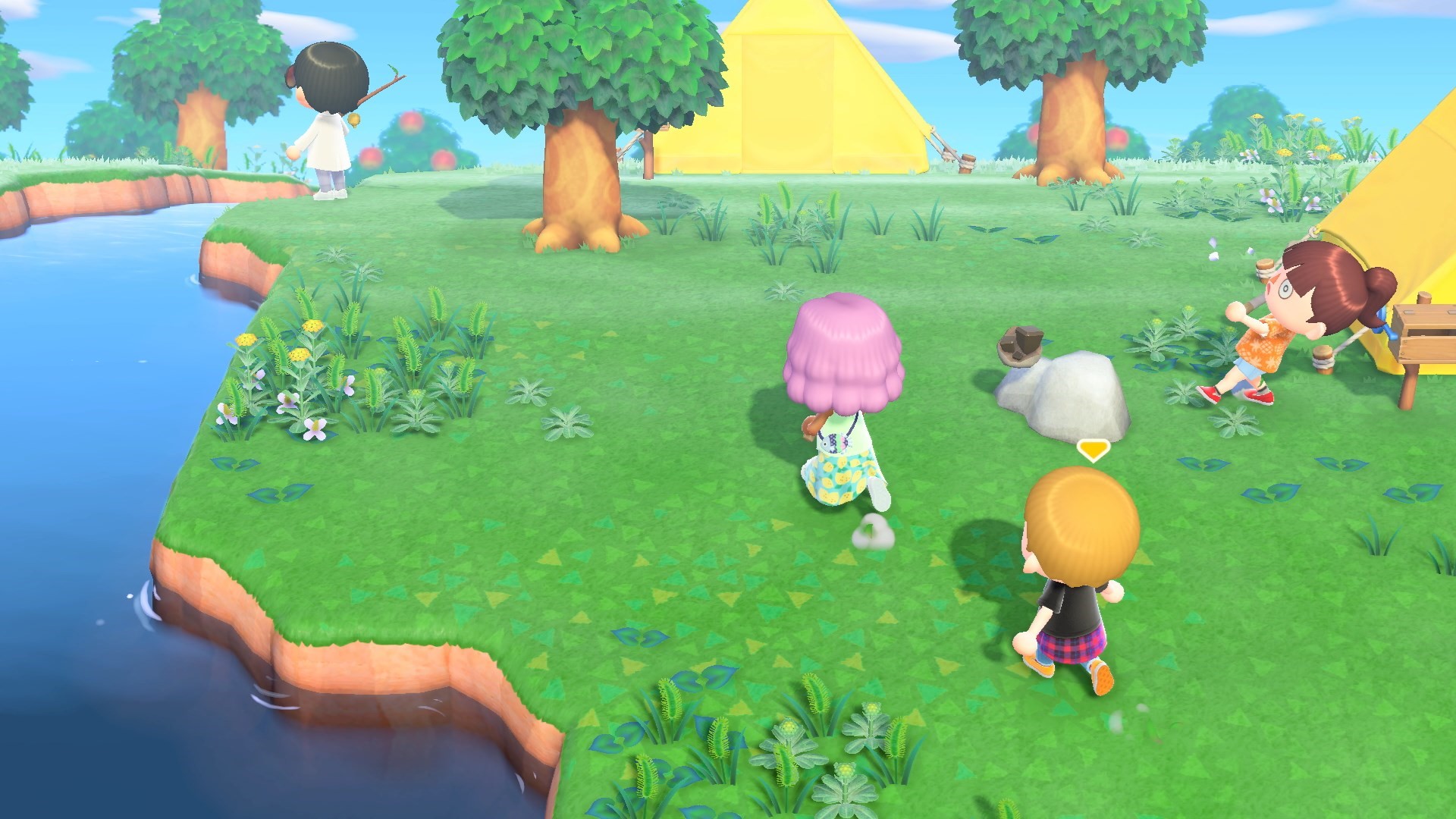 Swapping out being the leader is as easy as shaking the Joy-Con. This causes everyone to pause, and the A button blinks over the heads of the followers. Whoever presses A first becomes the leader. The leader is the only character who is able to pick up items and access their pockets, but all the followers can cycle through and use their tools. The leader is also able to use the right stick to swap the camera between two predetermined angles: one closer to the ground, and one which is more overhead. The Switch screen is just large enough, and the map just zoomed out enough, to comfortably play with four characters on the screen, but I can’t imagine eight characters on one map, especially when we all piled into one small tent. I suspect this mode will produce plenty of adorable mayhem.

The Nook Phone app was locked in this demo, so I wasn’t able to dig through its apps. One of the first things we did was find a vanity so we could spend a little time customizing our looks. As most of you know by now, your features and clothes are not restricted by gender. (Yay, I can finally wear jeans in Animal Crossing!) Our Nintendo rep’s character even had little white crumbs stuck to her face, which our rep said came from eating rice, though she wouldn’t go into any further detail around this. Edit: @itsannalog encountered a “rice crumbs” accessory inside the Able Sisters shop during her demo, so that mystery may be solved! 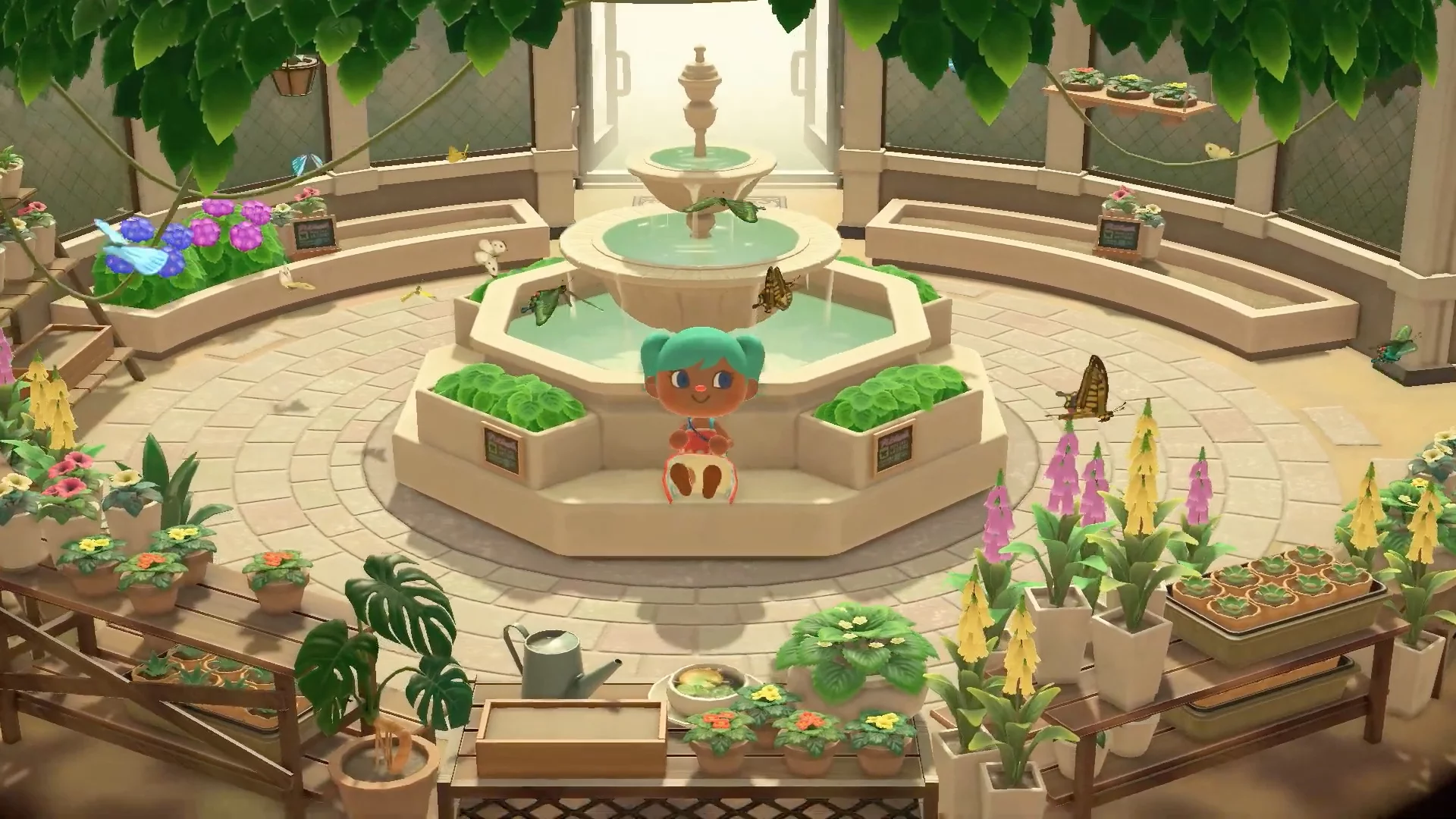 We made another lap around the museum, catching a glimpse of the back room of the dinosaur exhibit before we headed over to the bug collection. We all settled into the butterfly exhibit, which we saw briefly on the New Horizons Nintendo Direct, for a group photo. By using the shoulder button, you can whistle, which causes all the characters to look towards the camera. While many surfaces in the butterfly display were covered in flowers, there did seem to be a few empty ones. Curiosity got the better of me, and I asked if we’d be able to donate flowers to the museum, but I was, sadly, unable to get a clear answer.

Back outside, we encountered two villagers, Antonio and Bianca. While neither of them were outright rude, they did seem to be a little more feisty than in New Leaf, and Bianca cut our conversation short because she realized she was missing dance practice. I’d like to point out that, while I can’t guarantee these were the two villagers originally on this island, Bianca is a Peppy, not an Uchi villager. We also saw Harvey wandering around, but I couldn’t convince my crew to spend any more time chatting with NPCs. Instead, we used our flimsy tools to wreak havoc on the island. 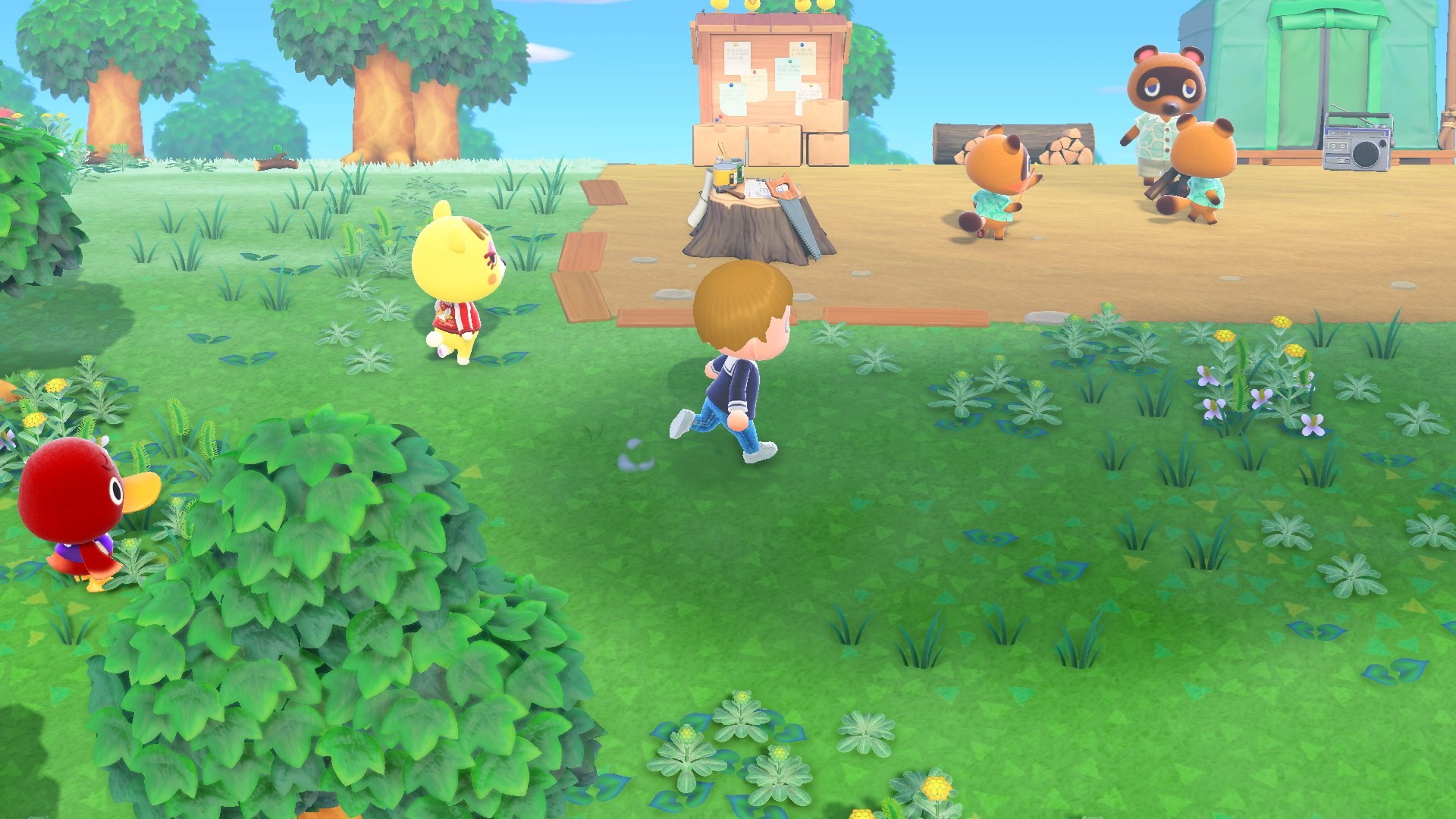 It turns out that the Flimsy Axe is not sharp enough to actually cut down a tree, so you can bang it until it breaks without ever felling a single tree. So we did that. A lot. Then we dug holes. It turns out that you can’t kick holes to fill them up in New Horizons, you’ll have to use a shovel if you want the hole to disappear. That said, your character can hop over holes quite easily. I wanted to try and dig holes around Antonio to see if villagers could also hop over holes, but my efforts were thwarted by my companions. More’s the pity. We also found and dug up a few glowing spots, and were rewarded with bags stuffed with 1,000 bells.

Then we moved on to flowers, which behave a little differently in New Horizons. Pressing the A button in front of a flower will cause you to pick a bloom, if available, but the flower will remain planted. You’ll now have to use a shovel and dig up a flower in order to remove it from the ground and place it in your pocket. Even during my short time with the game, I managed to pocket three new types of flowers: chrysanthemums, hyacinth, and yellow mums. We caught a few bugs, threw our fishing lines into the ocean a few times, then went on explore the town a bit more. 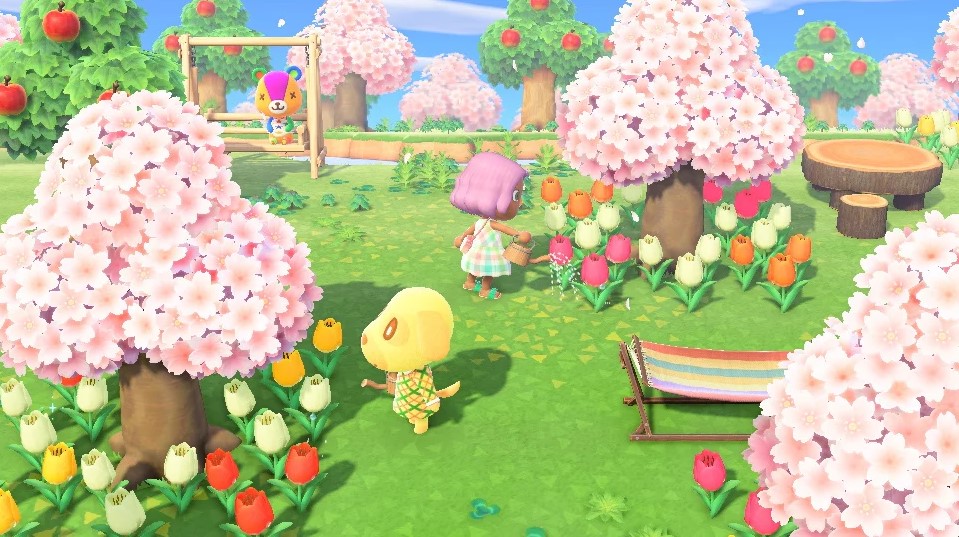 We saw many examples of previous indoor-only furniture placed outside, including a large harp which we could drag around, but sadly, could not play. We all piled into a small tent and dug through a storage chest to find a DIY recipe. The lead character had the option to learn or to drop the recipe, which I found to be exciting news! This means that you can trade recipes, not just items, with your friends, making this game feel even more community driven.

We did not have any emojis in this demo, so I couldn’t test if Harvey, Nook, or any of the other special NPCs would respond to my emotes, but I did get to see a number of different behaviors by the NPCs. Bianca was wandering around with a popsicle in hand, Antonio bent over so he could use his very long nose to smell the flowers, and Nook wandered away from us to go type on his computer, turning his head when we moved quickly near him. The animal characters certainly seem more lively this time around. 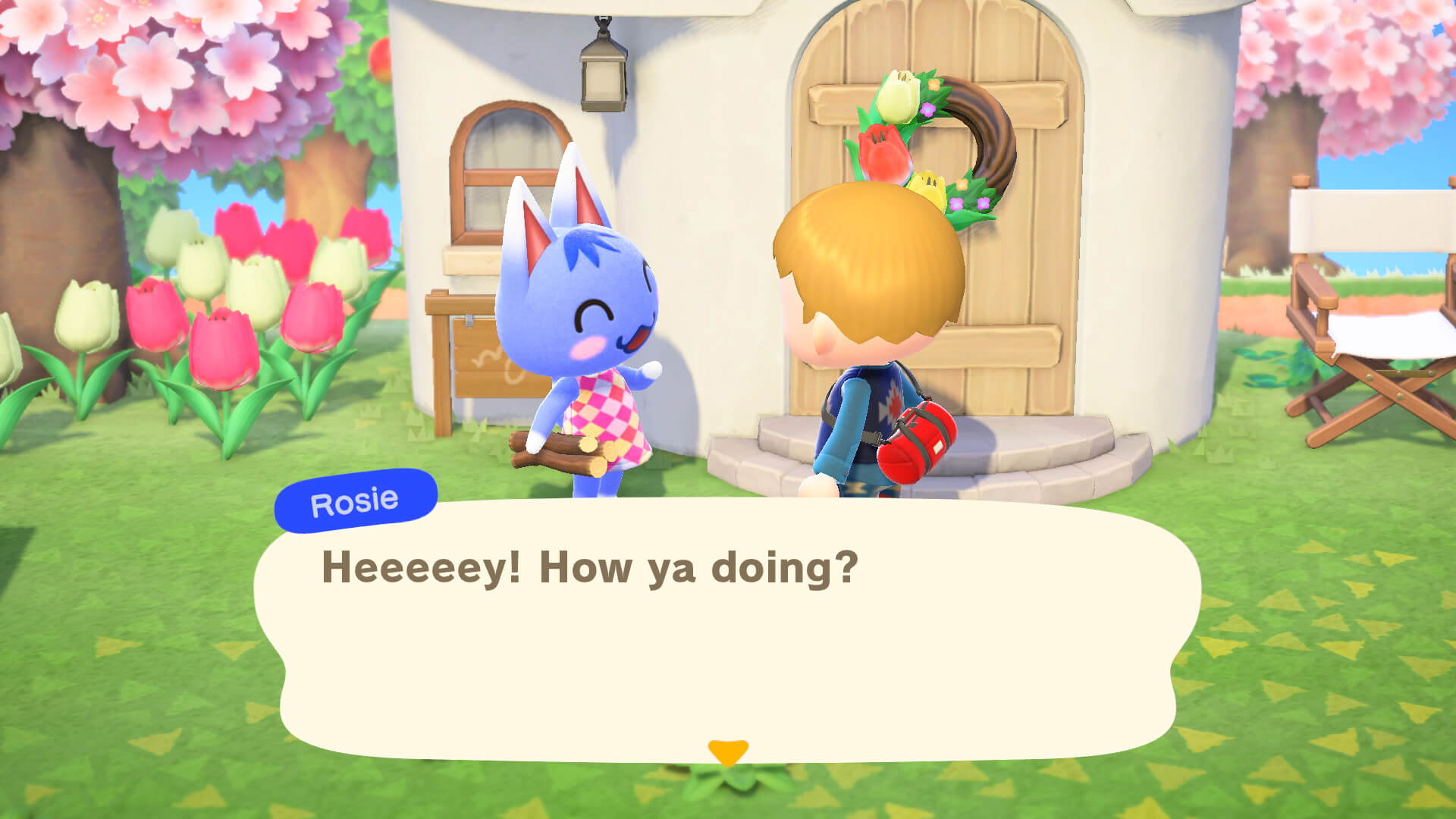 Just as we began to explore the beach, climbing onto the rocky flats at the north end of the map and splashing through the little tide pools found there, our time with the demo was over. It was a delightful but tantalizingly brief glimpse into the world that awaits us later this month. It was rather difficult to tell which features had not yet been unlocked versus which ones were simply locked down for the demo, but we were not able to play around with one of my most anticipated features, being able to create custom paths, and there was no sign of my beloved coffee god, Brewster. I’ll simply have to wait and stare hopefully into the blackness of my morning coffee that I’ll soon be having my morning brew handed to me by my favorite quiet pigeon barista. Animal Crossing: New Horizons will launch March 20th exclusively on the Nintendo Switch. Be sure to check back for more coverage, join our Animal Crossing launch day livestream, and check out our article on the surprising theme of New Horizons.