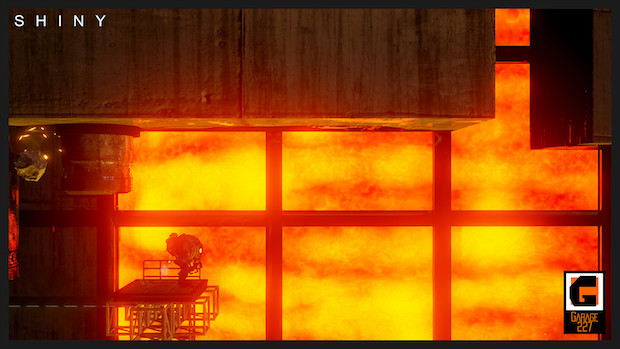 With violence being prevalent throughout so many art forms today, developer Garage227 wants to do its best to counteract that with their newest 2D platformer, Shiny. This journey tells the tale of a small little robot, who wakes up to find the humans populating his planet have taken all the resources and left. He roams around by his lonesome only to find the body of one of his robot pals. In order to revive his bud, he must find a generator, power up, and then transfer that power into the unconscious bot. This is what’s at the core of Shiny; it’s all about bringing back life, never taking it.

From the playable stages at PAX East, you are given multiple deceased robots that need to be recharged. Since you need power from the generators, you must overcome whatever puzzles sitting in front of you before you can power them up. The challenge is far from too punishing, which reinforces the idea that Shiny isn’t about stressing over every jump you take; it’s about relaxing and saving some little robots. Of course, not every level is a simple puzzle that leads to a generator, and objectives will differ as the game goes forward.

The example shown to me was a level that saw Kramer (name of your main character) quickly sprinting away from approaching fire. It’s similar to an auto-scrolling level in other 2D platformer, but it doesn’t feel too frustrating. As of right now, the controls can feel a bit floaty, but once you find a rhythm, little Kramer is pretty hard to stop. Another facet that will vary up the level design is the upgrades system, which spits out powers (fireproof suit, jetpack, etc) at predetermined areas in the game. You can see some levels that will force you to manage your fire resistance by repeatedly tapping the triggers, but doing so drains your bot’s valuable energy.

Your energy can act as the ultimate determining factor between you completing a level or having to watch your bot power down. As you roam around the world, you are consuming small amounts, with larger interactions, such as opening doors or reviving friends, consuming larger portions of your meter. You renew your energy by finding a generator (which acts as a checkpoint) and consuming its power. Though the actual level design may not be immensely challenging, figuring out how to allocate your energy is.

While it contains a fairly interesting premise, the story is far from the focal point of playing Shiny. Your main objective is to simply recuse your fallen comrades and try to restore some type of life. According to the developers there will be very little in terms of cutscenes, with the opening and concluding sequences being the longest. There are a few story bits spliced into the middle, but most of your time will be spent figuring out how to best utilize the upgrades and energy around you.

Shying away from any form of violence is an admirable goal in 2016, but one that Shiny takes on full-force. Beyond its innocent presence seems to be a fairly intricate little platformer. One that doesn’t rely on tough jumps and incredible difficulty, but instead forces you to worry about your movement and how to best utilize your energy. Shiny is a very intriguing case, and could be a fun take on the increasingly over-populated 2D genre.