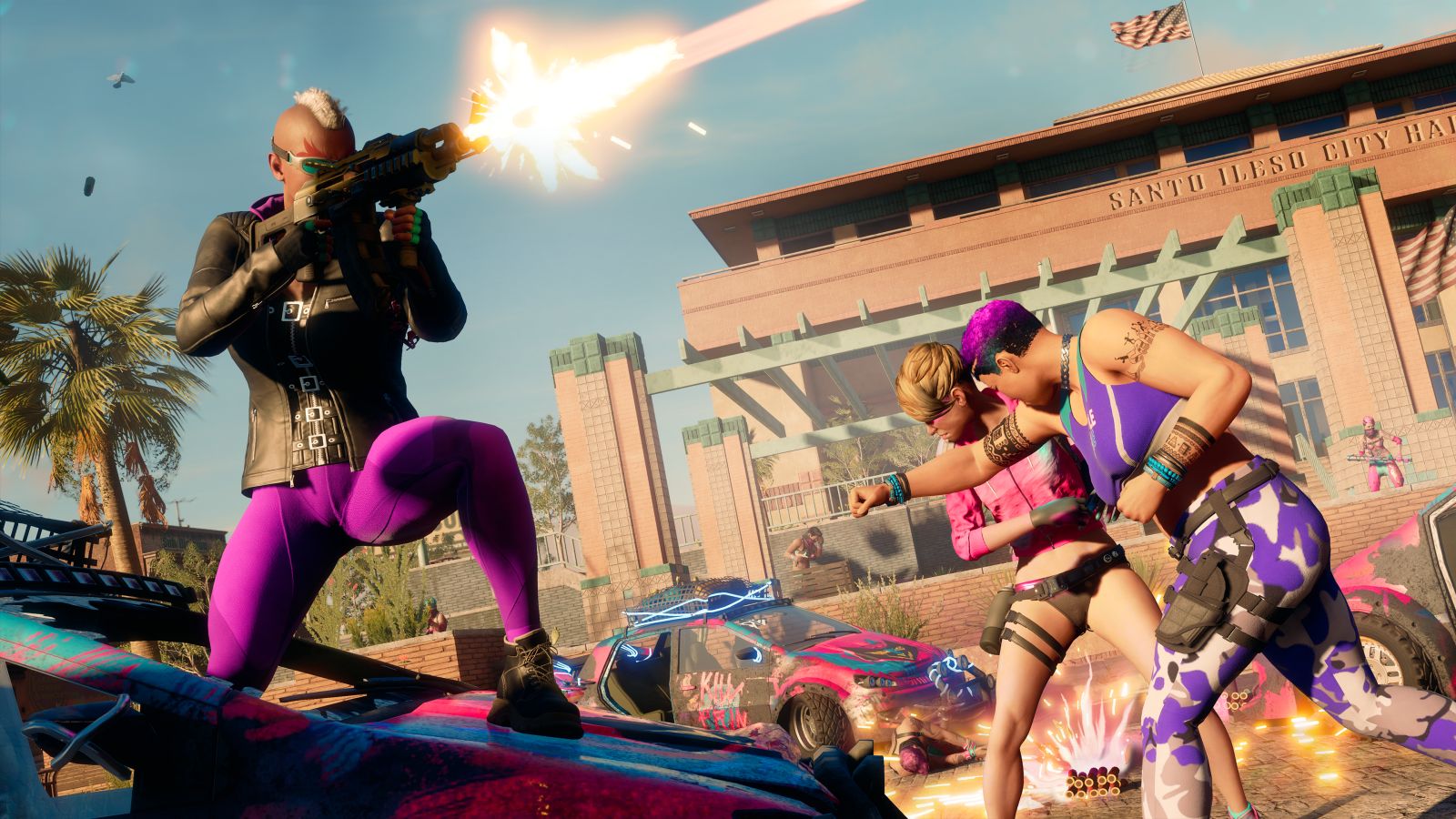 Ever since the Saints graced the Xbox 360, they’ve been a staple of the gaming scene. It’s not that they did any gaming concepts better than their competition, and we don’t talk about things that rhyme with Band Cleft Roboto here, but they were always way more fun to play. There’s something distinct about the Saints Row series, and it kind of lost that to a degree when it went off the rails when Saints Row 4 came out. Thankfully, the team at Volition has had their nose to the grindstone to reboot us into what makes a Saints Row game a Saints Row game, and we had a front row seat to see it all in action.

Everything starts with a bank robbery. Yup, this is definitely still Saints Row. This story mission doesn’t have you doing the actual hold up though, but rather has you working through the getaway. The team splits up, with the intention of making the police chase just one of you, and of course, that ends up being you. This initial section has you shaking several officers in order to get to your other car, and it does a good job of demonstrating how these kinds of sequences don’t change much, but have added mechanics to give more variety. For instance, side-swiping a vehicle is going to damage it, and cause them to careen off the road. While that sounds like a normal thing, it’s something that a game has to respond to and Volition has built that in.

Once you’ve made it to your other vehicle, you find a rival gang has stripped it for parts, and unfortunately for them, they’re still around. This is where the combat comes into full swing, with plenty of blood and head popping for all you vagabonds. The old weapon wheel makes its return, full of different weapons to make life interesting, but that’s only part of it. Skills to change things up in finisher moves add a lot of variety to your encounters, like the “pineapple express” where you shove a grenade in the shirt of your opponent and throw them into their friends for a nice explosive attack. Some of the other finishers we saw remind me of Marvel’s Spider-Man, when you’d get the two button prompt to launch into a preset animated takedown. Given we didn’t see any prompts in these it’ll be interesting exactly how it works, but for now we can just expect there’s a lot more where that came from.

After all of this craziness you have to evade the police on a dirtbike, which doesn’t work out all that well for your boss. In the ensuing cutscene you’re cornered by the cops, until one of your crew comes along with an insane… well, let’s just say that trick could only happen in a Saints Row game. With our “heroes” on the escape, it’s time to hit up a few side hustles to start building the Saints anew. 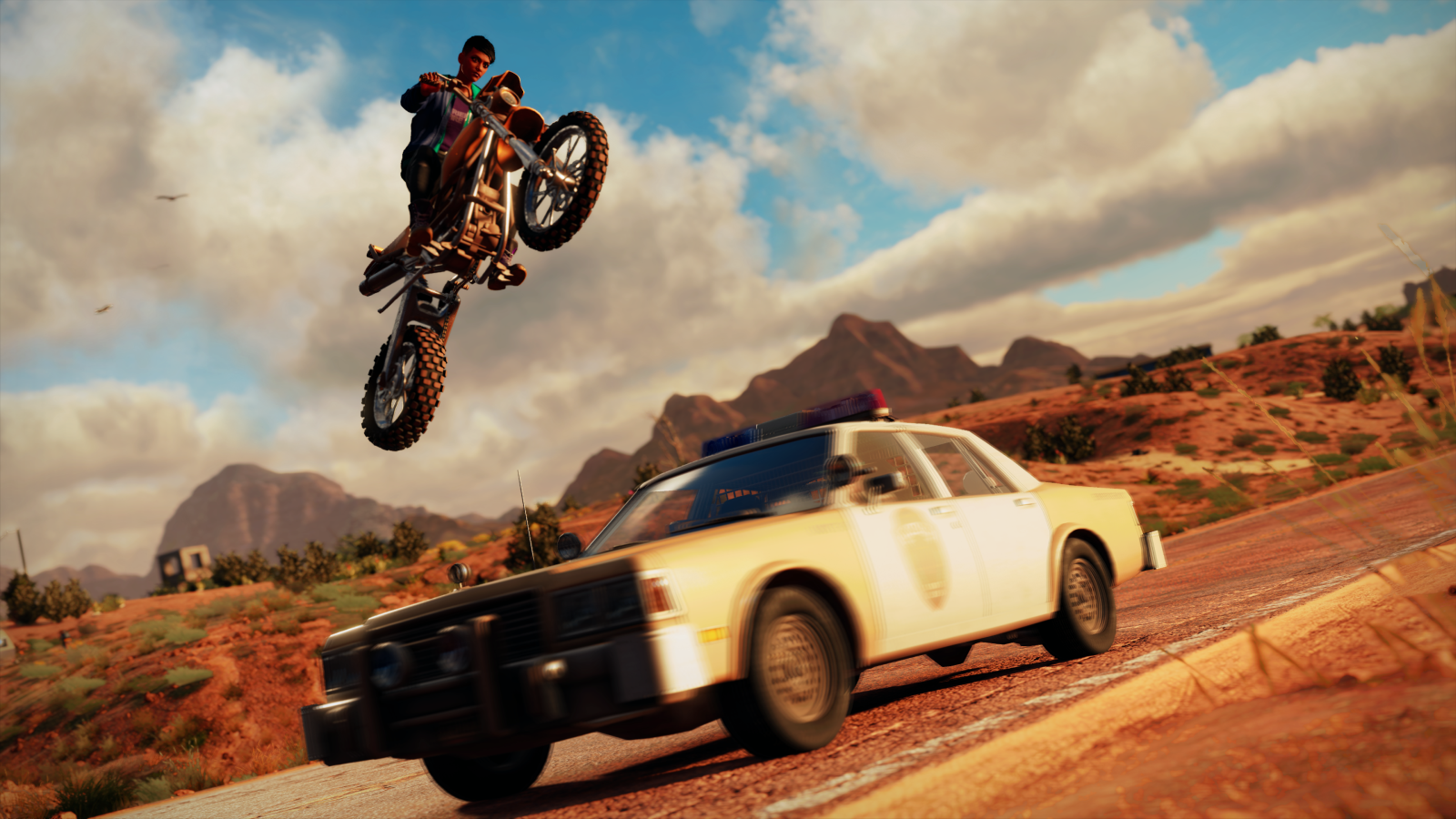 This is where we get to the meat and potatoes of what we were shown during the presentation. All the customization stuff we saw at the previous showcase is on display, with crazy clothes, cars, and emotes galore. What’s really cool is how it works in action; you’re going to be able to change up your boss whenever you want, and that includes gender, skin color, head shape, body fat, everything. The freedom to be what you want to be at any moment is freeing, and it’s a nice change from being stuck with a specific character the entire time. This is all customizable through your in-game cellphone, which is where you’ll control everything related to your boss.

Looking good while doing jobs is of course important, but what you’re doing is where all the fun is going to be. Side hustles are repeatable activities in the game, which will give you money and XP for finishing, along with different unlockables. The one we were shown was “Riding Shotgun”, where the boss defends a getaway driver after a robbery. Your job, as should be easy to assume, is to shoot back at the cops chasing you. The choice you have is whether you want to do it from the safety of the car, or to surf the roof for better shots and bigger weapons. As per most side missions, all of these are going to introduce you to new game mechanics, and allow you to meet some of the crazy cast Volition has assembled, like the cuckoo councilman’s wife who brought you along to rob that jewelry store. 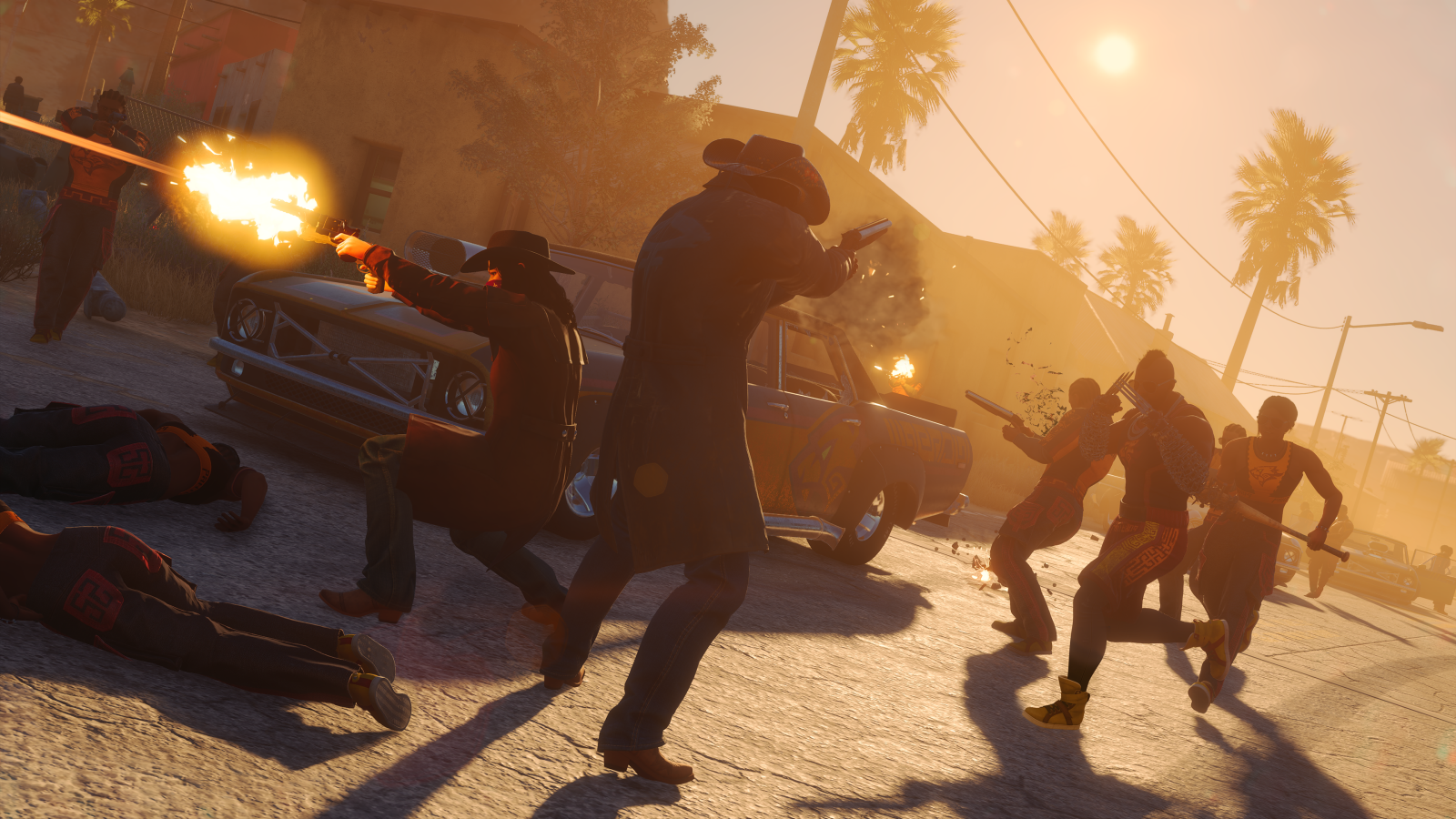 After all that craziness, we got to see more of the open world, building your empire, and a bit more story. I know freedom is a concept many games press upon you, but that’s why people love the series that rhymes with Stand Left Photo. Whether you’re running, driving, flying, or wing-suiting, you’re going to have the choice as to what you’re doing. This extends to the added perks and skills you’ll pull up on your phone. Your skills are a bit different than others, with up to four available to spec out at a time, and perks are minor passive abilities that can help in a pinch. The example we were given involved fire resistance, because the crew we were taking on used a lot of fire in their attacks. Even the weapons have special skills that can be unlocked by doing challenges, so it seems like you’ll have a bunch to grind for outside of the main missions.

One thing’s for certain, you’re going to need all of those skills when taking on your rival factions. We saw two of them, the Los Panteros and the Idols. These two are extremely different, with the Los Panteros a bunch of greasy gearheads, and the Idols baddies you’re more likely to find at a rave… or a cult. What is interesting is some of your crew members came from these gangs, and I can’t wait to find out how. We didn’t learn nearly as much about the backstory of these factions as we would have liked during the preview, but I really like how much it’s reminding me of the first two Saints Row games.

This bleeds into building your empire, which I can’t wait to explore when I get my hands on the game. One of my favorite games to come out when the open-world madness started was The Godfather II, which really dove into the idea of being a crime boss and managing businesses. This looks to be similar in Saints Row, but with its own twist on how you go about it. Everything is managed at the Saints HQ, which itself is an abandoned church that can be decorated by you to fit your style. Here you’ll find the War Table, where you’ll build your criminal ventures. These are your fronts, like a food truck network you use to distribute dru… candy. When you build these, it’s not just a one off, you get rewards and money for it, take more control of Santo Ileso, and open up new missions to do. For example, Mayhem is tied to building “The Big One”, a military surplus store. In this gameplay you’ll be selling black market arms on the side, but you have to “demonstrate” them by blowing up the neighborhood. If you’re going to take over the district and complete your venture, it’ll be necessary to complete every instance. 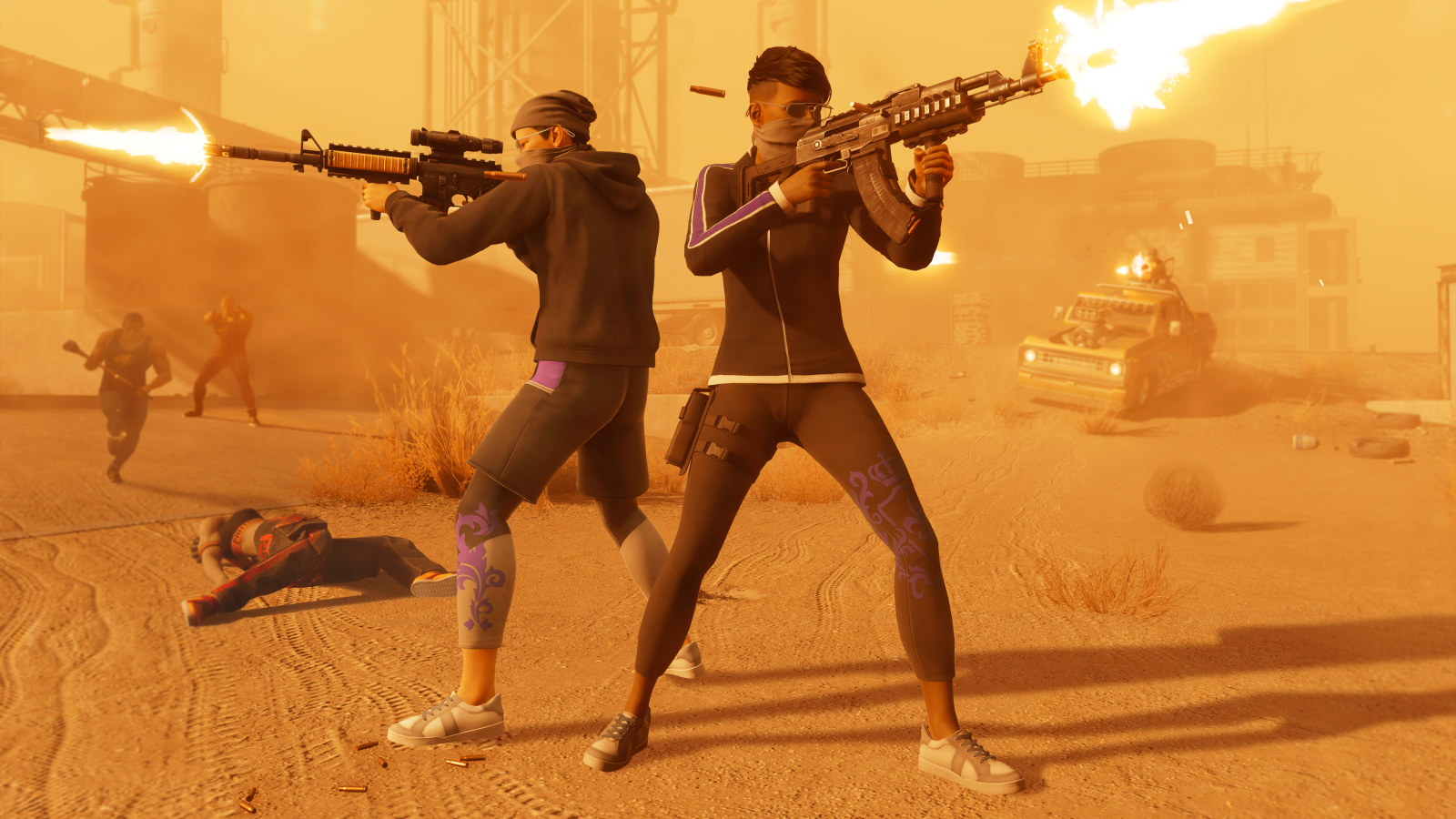 The cool thing about Saints Row is you aren’t going to have to go at this alone. Co-op is a seamless, drop in drop out experience, where your friend will be able to jump into your game and give you a hand or run around and do whatever the heck they want. They keep their personalization as well, so they get a chance to show off everything they’ve worked for so far. The best news for all of this is Saints Row is that the game is co-op from front to back; you’ll be able to play with a friend no matter where you are in the story, and it even recognizes if you’ve done something already via shared rewards so you can skip a mission you’ve already finished with a friend. We over at Gaming Trend love co-op games, but we don’t like having to replay missions over and over, so this is a boon and a half.

Overall, there are some really cool things that Saints Row has going for it. A lot of it looks par for the course, and even the same as previous titles, but that doesn’t mean it’s a bad thing. We all love Saints Row because it stuck to a familiar open world formula and injected its quirky style to it. Sticking with what works is great for fans of the franchise, and even better, they’re expanding on what made the original games great. I look forward to getting to play it, and we’re only a few months away from its launch on August 23rd, 2022. You can preorder the game now on PlayStation 4 and 5, Xbox One and Series consoles, and PC via the Epic Games Store.