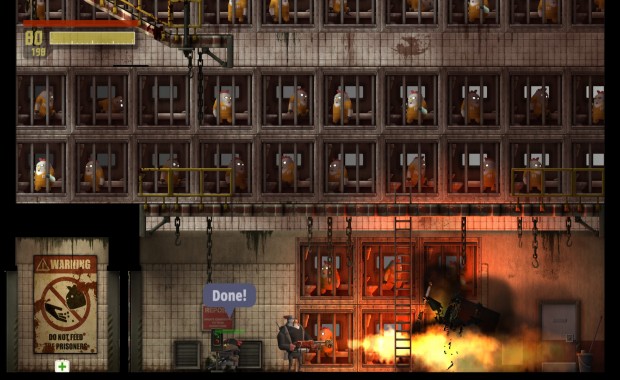 If you know me, then you know I’m a huge fan of over-the-top games that embrace a certain spirit of levity. So when developer Ratloop recently invited me to try out their upcoming poultry-based 2D shooter Rocketbirds 2: Evolution, I jumped at the opportunity to take on the role of Rocketbird, a Rambo-like chicken with a grudge.

Rocketbirds 2: Evolution is the sequel to Rocketbirds: Hardboiled Chicken for the PlayStation 3, and anyone who played the original will feel at home. All of the memorable elements are here, including overly gory combat, andthe knowingly cheesy plotline of an ‘80s action film. Players play as Rocketbird, and once again combat Putzki and his army of evil penguins, as they run, shoot, and explode their way to victory.

Fans of the first Rocketbirds game will be pleasantly surprised by the gameplay improvements in Rocketbirds 2: Evolution. Rocketbird can now shoot while jumping, fire in a 360 degree arc, and gameplay feels significantly faster than its predecessor. My time with the campaign was short, but it definitely seems to be trending in the right direction.

In addition to the single-player campaign, four-player co-op has been added, which breathes life into an otherwise familiar game. Players can work together to clear rooms, fight one another in a PvP arena, and stack up on one another in a pillar and walk around killing things, because…why the heck not? Multiplayer levels are procedurally-generated, which extends the life of the game, but also means that levels can occasionally feel very poorly constructed. Time will tell if this mode has the legs needed to keep players coming back for more.