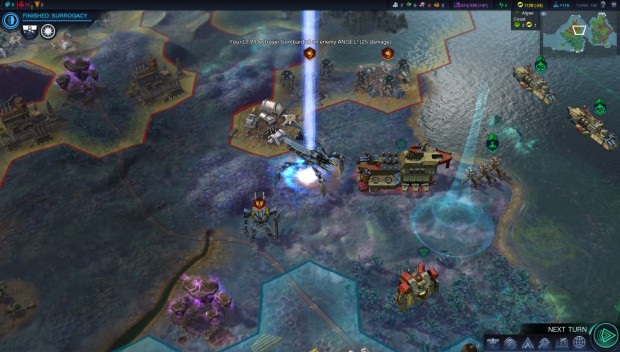 We’ve colonized through the ages, we’ve built impressive armies, and we’ve even taken to the stars, but for the first time we are going to take our territorialism to the sea. Firaxis and 2K Games has announced the first expansion to Civilization: Beyond Earth entitled Rising Tide. In Rising Tide, we’ll colonize the ocean, transforming the surface, as well as the deep blue spaces below, into one seamless playground.

To drive our demo, Kevin Schulz, the Community Manager for Firaxis Games, gave us a brief overview of what we could expect from the fall-slated title. As I mentioned, this is the first time we’ll be able to colonize the ocean, but that’ll require entirely new units.

Look at that gorgeous transparency.

Building an ocean variant of the explorer, we can now create floating settlements to farm the delicate biomes underneath. Those biomes offer specific benefits to players, and as before you’ll make choices on how best to exploit those benefits for your colony. Perhaps you’ve selected one of the four new factions, such as the Al Falah – a group of nomadic explorers who have traveled the galaxy without the benefit of cryogenics, reaping bonuses to city processes as you expand into the dangerous water below. It’s never as calm under the surface.

All new units to unleash.

Diving to reach a deep sea vent, one of the new resource points in Rising Tide, we can see sea hives and crashed satellites guarded by a Hydracoil. Clearing out this coil angers the nearby Makara, Sea Dragons, and rippers as we’ve upset the delicate balance of the ecosystem. As they attack the capital, we get to see just how powerful the new submarines, patrol boats, and other units can be. After a brief skirmish, the nearby nest is destroyed thus halting the creatures advance.

Disturb the hive, reap the whirlwind.

It isn’t just a deep dive under the sea, there are several upgrades to the diplomatic landscape. You’ll now be able to show relationships between other factions on the planet that you’ve encountered. You’ll also be able to build your political capital in yet-to-be-revealed trait upgrades that unlock a dynamic set of diplomatic traits. If it’s anything like the already-existing landscape of the tech tree, I’m sure it’ll be impressive. Though we didn’t get to see those either, Schulz also revealed that you’ll be able to build hybrid Affinity units and upgrades for the first time, as well as a full overhaul to the Artifact system.

It’ll be great to dig more into diplomacy

The team at Firaxis has clearly listened to fan feedback and is overhauling may of the requested features from Beyond Earth. It should make for a completely new landscape to play ‘just one more turn’ when Rising Tide ships this fall.