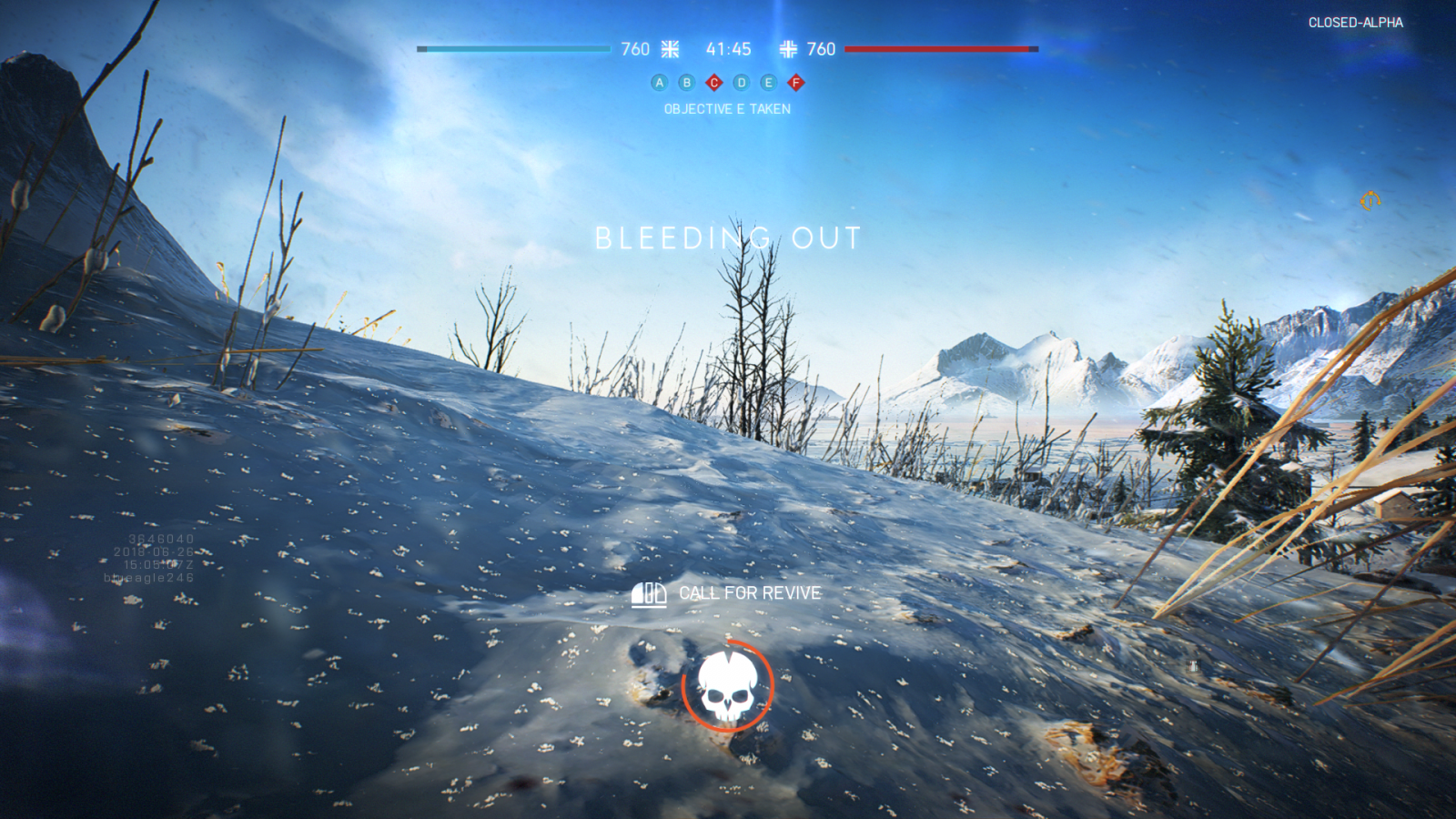 Dust and snow fill my vision as I run through destroyed buildings as my squad charges a point. This is when the Battlefield V Closed Alpha is at its best; which is good because it is like this more often than not. The pace has definitely been cranked up and there is little running around with no enemies. I left the alpha incredibly excited for the full game, so I guess it did its job.

The closed alpha offered two game modes; Conquest and Grand Operation. Conquest is the traditional Battlefield experience of capturing and holding points. Grand Operation is a new experience where you get to go through different battles throughout the war. The closed alpha gave us access to the Fall of Norway, where there was two days of combat that equal two different game modes. In Airborne, you parachute down to the battlefield where you have to blow up specific points, and in Breakthrough, you have to capture specific points, all while a team of defenders tries to stop you. I really like this mode and I think it is a creative way to tell the story of different battles and still keep the team based gameplay.

While I certainly did enjoy my time in the alpha, there were certainly some things I didn’t enjoy. One such thing is the damn bleed out system. It can’t be skipped. There could be no medics between here and the moon and it will still make you wait for it to time out. This gets very tedious very quickly. These are 45 minute matches, death is going to happen and I don’t want to wait every time. I want to get back in the action. I’ll wait myself if there is a medic nearby who is actually coming my way, but don’t punish me for medics not wanting to do their job.

I also find the building aspect rather tacky. It’s kind of nice to be able to turn destroyed buildings into some form of cover, but it is very limited and I never really had a reason to use it. I don’t want Fortnite, but I do want a reason to actually build. As it stands right now, it doesn’t really hurt the game, but there just isn’t much reason to use it.

Another problem I had was how the game ran. I understand it is an alpha, but it is hard to get a good feel for the game when it is jumping around between 20 and 80 FPS. It certainly didn’t ruin the experience, but it was annoying. However, I’m sure this is something that will be ironed out before release.

Now onto the stuff I like, and there is plenty of it. The destructible environment is as good as ever. The dread you feel as a tank barrels through the house you were using as cover makes for an incredibly tense moment. Grenades shatter windows and explosives poke holes in the walls in a way that is incredibly satisfying. While I’m still personally not a fan of vehicle combat, the destruction aspect is really cool.

Speaking of vehicles, they are all okay. I’m not much of a vehicle combat guy, but I did give them a whirl. They are fun while they last, but they don’t tend to last. The assault class has both dynamite and a rocket launcher to damage tanks. You have to constantly be on guard and hope someone hops in with you to help deal with these people because you can get shredded pretty quickly if you’re not careful. They control fine, if a bit stiff. The planes on the other hand are very stiff and just not that fun. You just kind of fly overhead and drop bombs or protect the bomber in a fighter jet. I don’t find it anywhere near as engaging as doing battle on the ground, but I recognize that is more of a personal preference.

The gunplay this time around is as good as it always is. They made some changes such as starting with much less ammo. You only have a few reloads, and that is a bit of a problem with the size of the game. While this can be fixed with the support class, there were approximately a million medics and only one support. I could always find healing, but nobody would give me ammo. At that point you may as well just take out the pistol and go on a suicide run to one of the few re-supply areas. If you have a group of friends this isn’t a problem, but communicating with strangers can be very inconsistent. Still, shooting people while you can remains fun.

It wouldn’t be a proper Battlefield game without the recon class. While it is satisfying to snipe people in the head for that instant kill, they aren’t much of a team player. In previous games their ability to spot enemies was super helpful; now however, enemies are spotted too easily by every class. Most of the time just looking in an enemy’s general direction will pop a symbol over their head that shows which class they are. It is a little too easy to spot and be spotted by enemies.

This area of the map gave my PC all kinds of trouble and often dropped FPS from 80 to the 20-30 range.

Battlefield V is clearly putting a heavy emphasis on squads this time around. Support is vital with how little starting ammo you get and being able to be revived is very nice, even if it’s just so you don’t have to deal with the damn bleed out screen. Snipers still have their role of picking off targets and causing the rest to take cover. Assaults are still a necessity to take out vehicles. The classes all play a role and are vital being a good team.

While I only had a small taste of Battlefield V, I’m excited for more. I appreciate the more squad centric focus and the destruction physics have never been more satisfying. There are still some issues to iron out, but nothing dampered my enjoyment of the game. The different classes were all fun in their own way, and Grand Operations is a creative way to add storytelling while keeping the core gameplay intact. There is a lot to like here and it is likely only to get better as it nears its release date.

You can see the game in action here.