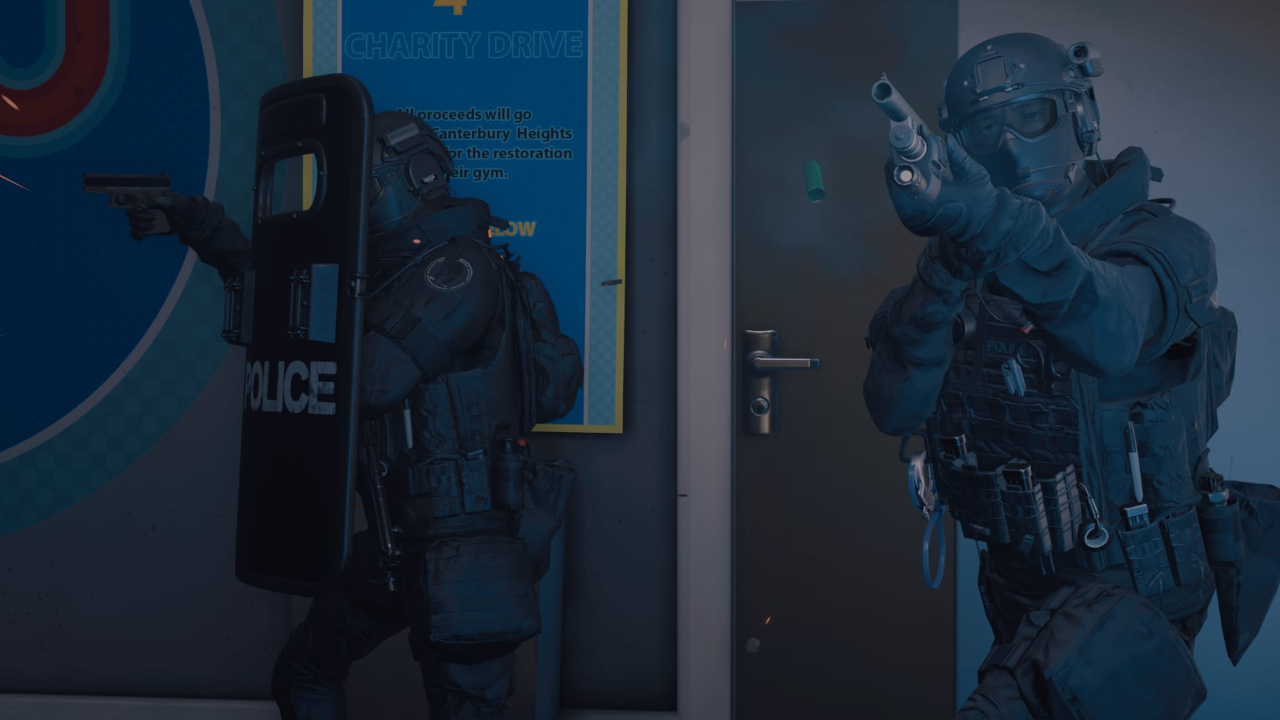 Going by the name alone, Ready or Not sounds more like a teen slasher horror flick than a tactical SWAT simulator, but having spent more than a few hours with it over the last few weeks, it’s very much the real deal. And when I say real, I mean that developer VOID Interactive is building the most realistic tactical simulator possible. Careful planning, and even more careful execution is required to accomplish your objectives and bring everyone home alive. Let’s ready up for our first call-out, because those are coming – ready or not.

Your patrol takes place in the city of Los Suenos, a fictional analog for what looks a whole lot like Los Angeles County. Before we jump into any call-outs, let’s get kitted out and ready for what’s ahead.

As you can see above, there are a wealth of options for weapons and armaments. There are no cosmetics here, everything is functional and serves a specific purpose. Starting with armor, you have three choices – light, heavy, or none. All three of those have a direct effect on your mobility, as well as your survivability should you take a hit. Face masks have utility as well as armor, with one providing ballistic protection for everything below your eyes. Other choices are gas masks, night vision goggles, and anti-flash goggles.

Heading into weapons, you’ll find that the Assault Rifle heading carries 12 options, with popular choices like the M4A1, MK1 Carbine, and G36C. Currently, there are only three submachine guns — the MP5A2, UMP-45, and MPX, for now. Shotguns are split into a trio of lethal and nonlethal choices, with a beanbag shotgun, the M4 Super 90, and 870 CQB being your choices. The Launcher only has one choice right now, the M32A1 Flash, though it’s very likely we’ll see this expand over time.

Secondary Weapons are divided amongst seven choices, including Tasers, UPS45s and even a .357 Magnum. Your long tactical choices are between a Mirrorgun, a breaching shotgun, ballistic shield, rescue shield, battering ram, and three options for the M320 grenade launcher — flashbang, stinger, or tear gas.

Heading into Gear, you are presented with the aforementioned trio of armor choices, as well as the headgear. Below that are grenades and tactical devices. Grenades are a mix of lethal and non-lethal again, though you’ll have to be careful with C2 and stingers — they can both kill somebody at point blank range. Flashbangs are incredibly effective, disorienting everyone unless you are wearing anti-flash goggles. The point is, you’ve got choices — lots of them. Whatever the mission calls for, you should have a tool to match.

Of note, you are an assaulter, so you won’t be taking on any highground roles. That means you won’t be using long rifles like the SWAT favorites, the PSG-1, the M24 SWS, or the AT308. You’ll be boots on the ground, so don’t expect much scope time.

Ready Or Not Hands-on Preview with AI members [Gaming Trend]

With your equipment selected, you can head over to a workbench to apply modifications. There are no currencies in the game, so you are free to select whatever fits your playstyle and the mission at hand. Foregrips, scopes, muzzle attachments including suppressors, and plenty more round out an impressive array of tactical modifiers.

As of right now, there is a bit of an oversight in that there are no stats around bullet penetration, range, or general effectiveness listed in the loadout. This leaves you to figure out these things in the field — not the best place to learn the tools of your trade. Similarly, you are told that various attachments will change different aspects of your weapons, but to what degree is currently a mystery.

Heading downstairs, it’s time to test your equipment. Reloading works more like the real world, with tapping R causing you to pull the magazine and swap it. Holding R pulls the mag and checks how many rounds remain – there are no floating ammo counters here. Double tapping R pulls the magazine and drops it, which is helpful if your partner is out of rounds. Moving into the Killhouse, you’ll also learn the importance of leaning, and the proper ways to open a door. Leaning left or right allows you to peek your head around corners, which is helpful for doing a quick check of a space before entering. The Mirrorgun (or Optiwand, if you prefer) allows you to peek under the door or around corners, not unlike the Israeli CornerShot, but without all of the offensive capabilities. It allows you to spot suspects, but also lets you peek for traps.

Approaching a door is a risky proposition, so you’ll need several ways to handle it. Obviously you’ll want to wand the door for traps, as mentioned above. Opening the door to handle said trap may require a moment with your multitool to pick it, or a lockpick tool to do it more efficiently. With the door unlocked, you can then “peek” the door, which is to say open it slightly. At that point, you can use the multitool to cut the trip wire to safe it. At that point you can either continue to open it, or push against it to open it by moving forward. Conversely, there’s always the ballistic option – kick the door once to break the lock, and kick it again to blast it open. Sure, you won’t see the trap, but it sure does look cool! Kidding aside, there are some times you just won’t have the time to wait if a victim is in peril. This is made all the more nerve wracking when you can’t peek under the door, as is the case with steel ones, as you really won’t know what you are walking into.

Now that the door is open, you have options on how to enter the room. Sure, you can saunter in and just take your chances, and you can always order your column to file in and cover you. The safer option if you know the room is occupied, however, is to take a more direct approach. A flashbang will disorient, blind, and deafen anyone in the room, causing them to stumble around. Yelling at them to comply often sees them on their knees with their hands in the air. Additionally, you can use a more painful stinger grenade – a device carrying dozens of hardened rubber bullets that will incapacitate anyone in the room. You only carry 4 of any kind of deployable, so use them wisely.

One moment while I relay a story that directly relates to my experience with Ready or Not. The first Police Quest game was a point and click affair that asked you to follow police procedure to protect the citizenry, and the very first call-out was to a park. The suspect is running around in his underwear and little else. You can take him into custody and he’ll immediately comply. That said, you may be in for a surprise if you didn’t frisk him as he’ll pull out a concealed knife and kill the intake officer (if memory serves me correctly) – a direct result of your inaction. In Ready or Not, I growled “Get on your knees!” to a subject who was well dressed, not wearing body armor, and did not have any tattoos. He did so, but when I approached, he sprang to his feet and slashed at my neck with a hidden knife! My column put him down, but it was a good reminder of why you arrest everyone, no matter how compliant. Everyone is a suspect, and everyone gets a pair of zip tie cuffs – we’ll sort them at the station.

At the briefing room, you’ll find your call-out options at the nearby table. At the time of writing, there are 11 locations, with four of them being test sites that the team is actively working on improving. With the location selected, you’ll pick between five callout types. Barricaded suspect is exactly what it sounds like, with the objective being to rescue the civilians and to ensure you aren’t preemptively killing any suspects. Raid bumps the difficulty, and as a result your Rules of Engagement will be a little more loose — expect protracted battle. Active shooter is an unfortunately frequent scenario nowadays in the real world, with the shooter(s) roaming the hallway, killing innocents without rhyme, reason, or quarter. Bomb Threat is a mode where you hae to find and disable explosives before the timer runs out, as well as rescuing the civilians involved. Hostage Rescue is again precisely what it sounds like. Not all locations have each mission type quite yet, but it does create some variety for the locations in the game.

I was surprised at how well the AI already works in Ready or Not. You can direct them by pressing the middle mouse button by default (though the game’s controls are highly customizable) you’ll be able to direct your team to do effectively any activity needed. Take cover, fall in, pick a lock, clear a room with a flashbang or stinger, hold position – whatever the mission requires. It’s a bit of an advanced thing, but you can also divide your squad. Color indicators on the HUD point to a blue and red team, allowing you to split the alpha and bravo. This is handy for breaching multiple doors simultaneously, or having one team breach and the other clear. Scrolling again, you can select the gold color to take control of the entire team once again.

Playing with your friends is the best way to experience the game, and our time with it as a team improves it dramatically. The AI is no slouch, but nothing beats a panicky and unpredictable human on your crew! Nothing demonstrates that better than watching three of us fail in spectacular fashion, so I’ll let this video speak for itself.

There are a handful of features I’d like to see added to Ready or Not in the runup to launch. While there are certainly call-outs where you’ll go in blind, most of the time you’ll have access to some level of property line plats from the city clerk, or better still, full blueprints of the buildings for the location. It’d be great to at least get a grease pencil briefing before engaging – failure to plan is planning to fail.

Ready or Not is impressive in a way I didn’t expect. Sure, I suspected it’d be a solid spiritual successor, but to see it coming together in a way that feels dangerous and unpredictable is an absolute triumph. As the team continues to add more content, improve their AI, and introduce new elements and tools, there has never been a better time to jump into Ready or Not. Give me a shout on your next call-out – I’ll back you up anytime.