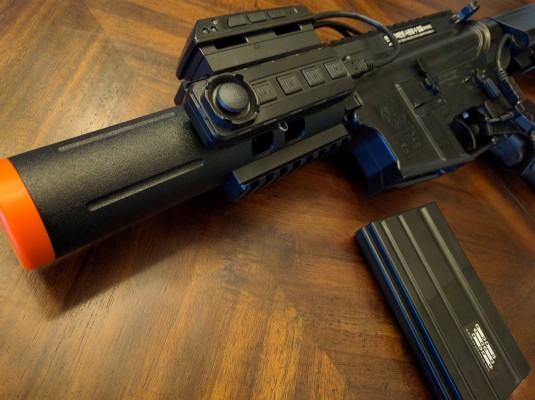 From the SuperScope on the NES to the Sniper Scope rifle on the original Xbox and PS2, we’ve flirted with the idea of using guns as peripherals for our first-person shooters for a long time. During one hazy trip to Kentia Hall a few years back, I even remember a mouse in the shape of a pistol. There are a lot of reasons why they’ve failed, but the largest has to be the disconnect between the shooting mechanism and the moving mechanism. Not unlike a high-end drone, it felt like somebody had to drive while somebody else ran the camera controls. There is a team looking to change that.

Currently on Kickstarter (and at the time of writing, with nine days to go), UzBRAIN.net is looking to bring a system that can simulate on-screen movements attached to nearly any Airsoft rifle you might want to use. What this creates is a rifle that has recoil — true shooter immersion. I recently got my hands on an early prototype of their Rail Gun system and put it through its paces.

The first thing in the Pros column has to be that this device is platform agnostic. It works for the PC, Xbox One, Xbox 360, PlayStation 4, and PlayStation 3. Second, it has been tested with a great many shooters and thus far is universally compatible. Call of Duty: Black Ops III, Halo 5: Guardians, Destiny, Star Wars: Battlefront, Counter-Strike — they are all playable with the Rail Gun.

Using it on any of the four aforementioned game consoles requires an extra step, as well as an adapter called a CronosMAX. The CronosMAX is a USB dongle the size of a thumbdrive that plugs into the console (available at Amazon here). Plugging the CronosMAX into your USB port, and then plugging an included USB cable from the side of the CronosMAX into the charge port on the Xbox One or PlayStation 4 controller, allows you to load profiles for the Rail Gun from your PC onto the Rail Gun system. It’s a pretty painless process and takes about a minute to accomplish.

Before we get into performance, let’s talk about the components of the Rail Gun and how they map to the game. The Rail Gun ships unassembled and without a rifle. This sounds like a negative, but it’s actually not — it provides the freedom to choose any rifle you wish (as long as it has a Picatinny rail on three sides or you can add them). Most Airsoft rifles will work just fine.

The device in five parts — the brain, a jog unit, a weapon unit, an RF receiver, a trigger unit, along with a strap, some clips, and an extra trigger pad. The “main unit” is the brain of the Rail Gun system and mounts on the top of your selected rifle, using the two included screws. Next up is the “Jog Unit” on the left side of the rifle. On the right side is the Weapon Unit, and the Trigger Unit attaches (via the included straps) to the grip which places a button directly behind the trigger. Connecting the cables and plugging in the USB RF receiver is all that’s left — it’s even simpler than I’m making it sound.

The main unit won’t likely get much of your attention after the initial setup, as it simply controls power and two buttons to raise and lower sensitivity. The Jog Unit, on the other hand, has the analog stick you’ll use for movement, as well as four buttons on the left side. The Weapon Unit provides the “face buttons” you might find on your controller, allowing you nine buttons on the right side. The Trigger Unit has three buttons where your thumb can hit them, one underneath the trigger well, and then the button for the trigger I mentioned earlier. You’ll note that I didn’t specifically call out what those buttons do; that’s because you can remap them using the CronosMAX software. The pre-built profiles worked very well and have been playtested extensively, but if they don’t match your needs you aren’t stuck with the selections UzBrain.net has provided.

The “Jog” side of the system

Before I jump into how gameplay went in practice, I need to explain the primary driver behind why this works — UzBrain.net’s Fast Rotation Technology. In shooters, you aren’t just running forward all the time. You’ll need to spin around and look behind you, and that means you need something that doesn’t have you swinging the weapon away from the screen. Without a sensor bar or any sort of additional wiring, the gun is able to track when you are pointed outside of the screen, accelerating your turn accordingly. A great deal of time was put into this simple-sounding tech to ensure it doesn’t have your character spinning around like a top. In practice, and across several games, I found that it worked remarkably well.

Starting off on the PC, I took Star Wars Battlefront for a spin. Using the smaller screen (17”) of my laptop, the FR (Fast Rotation) was a little more challenging than on a larger screen, but after a single round I was remarkably effective. It takes a little mental adjustment as things like sprinting are done with a button instead of depressing the thumbstick on the jog module of the gun, but that didn’t take long to remap in my brain. Soon I was cutting down Rebel scum from the sky using my jetpack, lobbing grenades, and generally pushing tickets for the Darkside. Getting in a vehicle was a bit of a change, as the Rail Gun is built for shooters. It all works well enough, but it turns flying an X-Wing into something that looks more like conducting the London Philharmonic. It’s silly and fun, so I can’t complain much.

The firing mechanism goes inside the trigger well.

I do want to point out something often promised, but rarely delivered about motion-sensing technologies like the Rail Gun. The Kickstarter claim is that you simply plug in the USB dongle and turn it on for it to work. It really was as simple as that. The Rail Gun’s motion took over my mouse functions, and the rest was simply sensitivity adjustments.

With my profile loaded on my ChronosMAX, and my Rail Gun assembled, I loaded up the game you are most likely thinking of when you look to buy something like the Rail Gun — Call of Duty: Black Ops III. Like Battlefront, it felt intuitive and very playable after just a round or two of play. Sure, I wasn’t ‘competitive’ in multiplayer, but that didn’t stop it from being fun. In single player I had more time to react, making for a smoother experience. Since Call of Duty has taken on some quicktime event-type moments (Press X to not die!), those moments required some mental gymnastics to remember which button was mapped where.

As I finished up a round of Counter-Strike it dawned on me — this thing was practically made to live in the Virtual Reality space. The tactical feedback of the airsoft gun, added with the full immersion of something like the Vive, PlayStationVR, Oculus, or any other VR adapters coming this year, take the standard gameplay on the screen and make it into an entirely new experience. The current Kickstarter price is just over $150, with the post-launch price being slightly higher. You’ve only got a few days left to jump in, and with the product shipping out in April, now’s the time.

RAIL GUN from UzBRAIN.net is currently in Kickstart pre-funding stage, and can be found here.