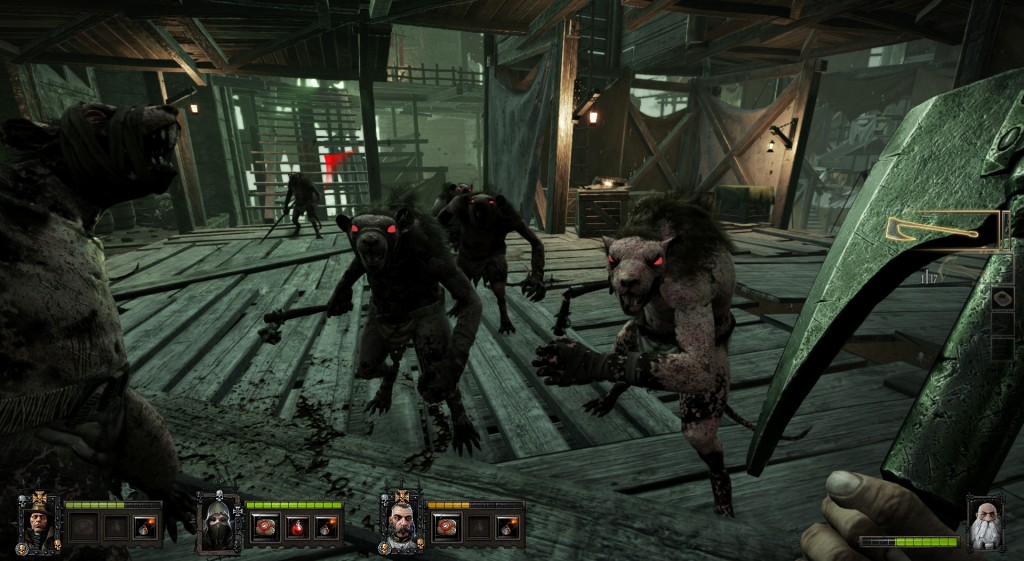 Take the Left 4 Dead series, throw the whole thing into the Warhammer universe and replace all the zombies with angry, evil rat-people. Top the whole thing off with a persistent loot system, and you’ve got Warhammer: End Times – Vermintide. I manage to get in a few rounds of this during the recent public beta, so I’ve got some hands on experience with the title ahead of its upcoming release. The short version: it’s a powerful advance on the cooperative slaughter genre that Left 4 Dead has stirred up, and the addition of loot rolls is really the best thing since sliced bread. For the longer version, read on.

For those of you not familiar with Games Workshop’s Warhammer universe, here are the essentials. This is an explicitly fantasy setting – not to be confused with the somewhat better known Warhammer 40k series, though similarities abound. It’s a gritty, serious world filled with zealous empires, existential threats and so much grimdarkitude that it’s actually kind of funny. In Warhammer: End Times – Vermintide (hereafter just Vermintide), the latest threat comes in the form of a mass uprising of Skaven: hideous, thoroughly evil rat-people intent on erupting out of their underground lairs to swarm the world in a frenzy of butchery and foul defilement. You’ll take on the role of one of five different characters to hack, slash, shoot and burn the furry little critters away, purging the world of their blight.

In Warhammer, a swift axe to the forebrain is the best solution to most problems.

Vermintide has much in common with the Left 4 Dead series. You have your team of four fighting off a swarming horde of evil, largely cannon fodder punctuated with a few ‘boss’ threats here and there. The characters chat and banter back and forth as you play the game, with each of them letting their personalities and stories shine through while you cut through enemies. The biggest differences, aside from the change of setting and monsters of choice, are two: the heavy but not exclusive emphasis on melee combat, and the introduction of loot and stat-changing equipment. The latter in particular is a great addition, because really: who doesn’t enjoy scrounging up powerful pieces of loot? In Vermintide, picking up new gear isn’t a matter of fighting your teammates over what spills out of a corpse: instead, at the end of a level’s completion, dice are rolled. The better the dice results, the better your loot result, with the opportunity to pick up even more dice (and thus increase the odds of better quality loot) presenting itself during the game. Not only is it fun to pick up better and nastier equipment, but the process encourages everyone to get their acts together and do a good job.

No fair! Skaven are supposed to be small! SMALL!

I’ve only scratched the surface of Vermintide during the beta, but I can sum up the experience thus far easily: fun. The Warhammer world is well-rendered, oozing with personality, both in terms of the characters in the game and the environments themselves. The skaven feel appreciably alien and different and threatening all at once – they scamper and strafe, acting like something above mere zombies with a reskin job. The addition of upgradeable loot and distinctly performing characters enhances the experience, whetting the appetite for repeated excursions for reasons beyond chasing achievements or helping a friend finish the story. And the actual gameplay? It’s a delight. There were moments of intense, frantic swinging of blades and shooting of arrows while struggling to beat back seemingly endless hordes of skaven. The melee combat seems well-done, going beyond simple swing-and-move action to a system where strafing, blocking and cooperating is key.

But so far I’ve only managed to scratch the surface of this game, and it remains to be seen whether it’s going to hold up under a serious assault of gaming attention. Luckily, it won’t be much longer before we find that out: Vermintide is due out on the 23rd, and I’ll hopefully be able to give a fuller report on just how fun it is to rack up a hundreds, rather than dozens, of skaven kills.